Introduction: This paper proposed a kind of segmentation method for medical CBCT image in liver organ based on Bayesian network.

Methods: Taking CBCT medical image of liver organ as a focus of medical image segmentation and to segment the area we are interested in with noise elimination and image enhancement. In order to show multiple image information including the liver organ CBCT image color, texture, shape and other features, image information can be extracted, and the extracted image features can be classified from the perspective of data mining by Bayesian network.

Results: The method ensures that the target points of the liver organ CBCT image are clearly visible, which is not only suitable for the normal image registration, but also for the disordered image registration. Bayesian network method has good organization ability to distinguish pixels with similar gray level belonging to different tissues in the image, and map them back to the image space, so that tissue extraction from liver organ CBCT images has a good effect.

Conclusion: The CBCT images are analysed based on medical image database to better achieve the required characteristics in data mining, extraction of non-rigid registration and image segmentation technology. And the result shows that this kind of method based on Bayesian network is a good theoretical method that can achieve expected outcome and the accuracy rate is good with high practical application.

A Bayesian network is a Directed Acyclic Graph [7] (DAG) that is composed by representative variable nodes and directed edges. The directed edge uses the parent nodes to point to the descendant nodes. In Bayesian network, there are some nodes called root nodes. They have the prior probability distribution which is associated with them and that can be directly provided. The non-root nodes are called child nodes. The source is known as parent nodes and each child node has a conditional probability distribution of the parent node under value state. Each node in Bayesian network has a Conditional Probability Table (CPT) [8,9].

If A represents the node variable and B1, B2, ..., Bn refers to the parent node of A. For node A, the CPT table refers to the value of P (A|B1, B2, ...., Bn). The correlation degree between nodes is characterized by the conditional probability value. The conditional probability table of each variable is calculated by the value of its parent node. For the variable without parent nodes, it can be obtained by the historical statistics as well as the knowledge and the experience of experts. A simple Bayesian network diagram is shown in Figure 1. 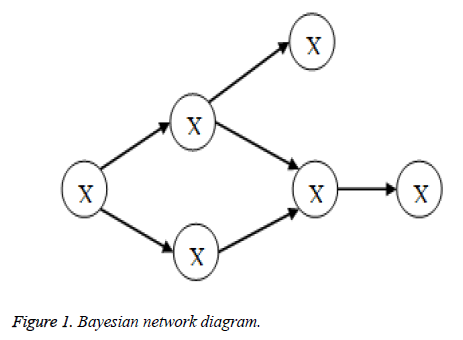 Through the above formula, the distribution function of joint probability of Bayesian network is shown in followed formula.

For the construction of Bayesian network, there are five steps:

Step 2. Determining the relationships between nodes;

The range of the set probability is (0, 1) and the value of all pixels represents the probability belonging to the liver. As shown in the Figure 2. 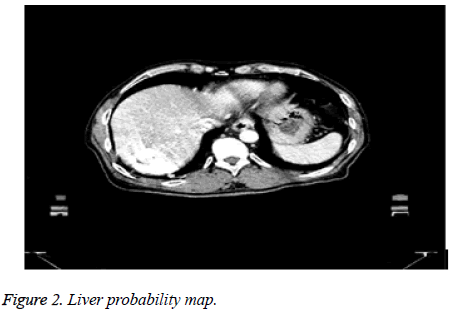 Because the liver lesions have large difference in shape, we use a sparse linear combination optimization to solve the over segmentation or under segmentation will be combined with the sparse shape and probability map, through TV-L1 preprocessing, the segmentation result was obtained from liver is shown in Figure 3. 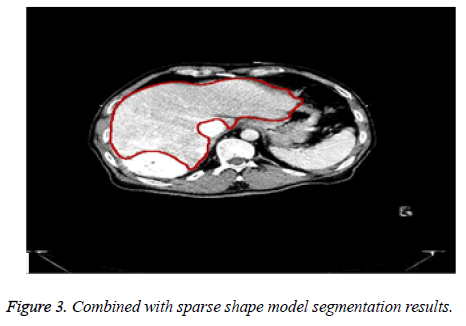 The results show that using SIFT to automatically match the feature points can effectively improve the segmentation results of sparse shape. It is proved that the segmentation of liver CT image can be improved by combining the probability map and the shape model.

Medical images included abundant characteristic information have been divided into data’s characteristic mining and denoising processed data analysis by data mining and computer technology, and the characteristic extraction based on Bayesian network analysis is obtained, and image data will be further analysed by de-noising processed images. The segmentation method proposed in this paper can be applied to CBCT-based image-guided radiation system and PET. CT imaging system, can improve the accuracy of radiation therapy, and improve the efficiency of clinicians and oncologists.

This work was supported by the Natural Science Foundation of Hunan Province, China (Grant No.2016JJ4012).