A case of Choroidal Hemangioma in pregnancy.

We report a 29 year old female gravid 1 with 28 weeks of gestation was referred by her obstetrician for blurred vision in her left eye from the past 3 days. On examination patient manifested a facial hemangioma over left face and lid. Fundus examination of left eye revealed a choroidal hemangioma which increased in size during the course of pregnancy. No intervention was done and the tumour regressed completely after pregnancy. Observation alone may be indicated in cases of choroidal hemangioma demonstrating sub-retinal fluid in pregnancy. Circumscribed choroidal hemangioma can manifest in Sturge-Weber syndrome rather typically found diffuse type.

Choroidal hemangioma is an unusual, benign vascular hamartomas whose exact incidence is not clear. It usually presents between second to fourth decades of life. It can either be asymptomatic or present with varied symptoms like reduced vision, metamorphopsia, and photopsias [1]. Generally, they are orange-red elevated masses, which are found posterior to the equator. Lesions are usually solitary and unilateral [2]. Overlying subretinal fluid, serous retinal detachment and cystoid macular edema are common findings.

Diagnosis of choroidal hemangioma is challenging as it can mimic serious intraocular lesions like choroidal melanoma, metastasis and other inflammatory lesions [6]. Our case study is the fourth case to be reported of a patient with SWS who developed a circumscribed choroidal hemangioma instead of the usual diffuse manifestation.

A 29 year old south Indian female gravid 1 with 28 weeks of gestation was referred by her obstetrician for blurred vision in her left eye from the past 3 days. No history of symptoms and signs of pre eclampsia and eclampsia. History of LASIK surgery in her right eye done 2 years back. On examination patient manifested a facial hemangioma over left face the upper medial lid. This increases the chance of ocular involvement in a patient with SWS. It consisted of dilated thin walled capillaries and venules, most of which are situated in the upper part of the reticular dermis. Her visual acuity at the time of presentation in right eye was 20/20 and in her left eye 20/60 N10 improving to 20/30. Intra ocular pressure was 16 mm of hg in both eyes.

Findings from a dilated fundoscopic examination of left eye revealed normal vitreous. In the macula we found central pigmentary changes of the outer retinal layers as well as an area of elevation that encompassed the entire superior macula going beyond the arcade vessels, most likely corresponding to an exudative retinal detachment. Beneath this, she had a red elevated area with relatively sharp borders consistent with a choroidal hemangioma. She also had inferior ILM folds in the left eye (Figures 1 and 2). 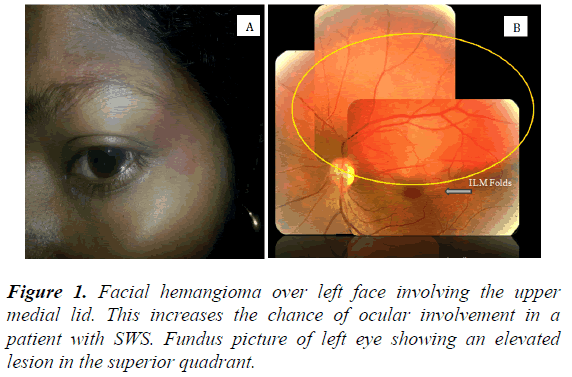 Figure 1: Facial hemangioma over left face involving the upper medial lid. This increases the chance of ocular involvement in a patient with SWS. Fundus picture of left eye showing an elevated lesion in the superior quadrant. 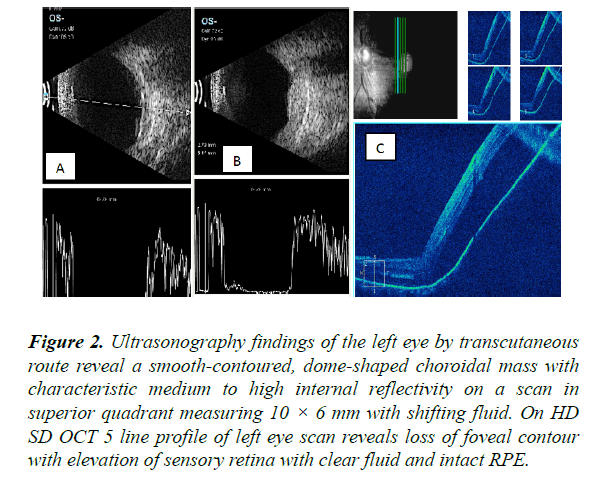 Patient was reviewed after 2 weeks, vision reduced from 20/60 to 20/120 and to 20/200 N36 on further follow-ups. Also there was an increase in the sub retinal fluid. No management was planned still at this stage and observation was the call. There after review was done every 2 weeks till delivery and until 3 months post-partum. Her vision in left eye had improved to uncorrected 20/30 N6 (Figures 3 and 4). 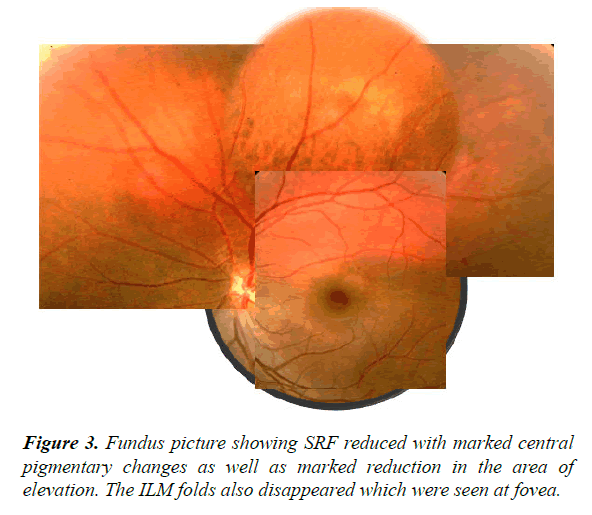 Figure 3: Fundus picture showing SRF reduced with marked central pigmentary changes as well as marked reduction in the area of elevation. The ILM folds also disappeared which were seen at fovea. 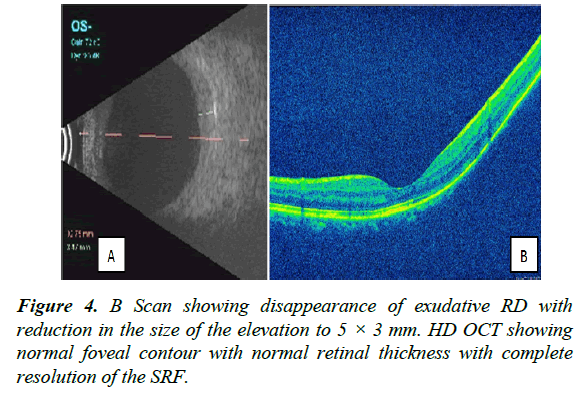 Figure 4: B Scan showing disappearance of exudative RD with reduction in the size of the elevation to 5 × 3 mm. HD OCT showing normal foveal contour with normal retinal thickness with complete resolution of the SRF.

In the Shields series, 67% of tumors were in the macula, 34% were between the macula and the equator, and no tumor was anterior to the equator. Mean tumor diameter was 6.7 mm, and mean tumor thickness was 3.1 mm. Serous retinal detachment and cystoid macular edema were reported in 81% and 17% of patients, respectively. All circumscribed choroidal hemangiomas reported by Witschel and Font, were located posterior to the equator, and subretinal fluid was noted in 47% of their patients [8]. Our case had tumour located in the posterior pole just above the fovea extending superiorly for size 11 × 9 mm with ILM folds at the fovea.

Regarding safety of FFA in pregnancy the correct answer no one knows. Most retinal experts don ’t perform fluorescein angiography on pregnant women. The risk of congenital malformations or spontaneous abortions is probably low with fluorescein angiography but no one can say that it’s completely safe. Also our literature review showed case reports with completed resolution of fluid after delivery. So we decided to remain safe and observe without any ancillary tests or any treatment till her delivery and intention was to treat the patient with photodynamic therapy (PDT) after delivery. Our patient showed complete resolution of subretinal fluid with vision recovery after delivery.

We attribute this resolution, to normalcy of altered hemodynamic state during pregnancy owing to hormonal changes during pregnancy which may result in engorgement of vascular networks within the hemangioma, leading to increased transudation of fluid into the sub-retinal space.

Observation alone may be indicated in cases of hemangioma demonstrating sub-retinal fluid in pregnancy with keeping in mind that spontaneous resolution always is not a rule. Circumscribed choroidal hemangioma can manifest in Sturge- Weber syndrome rather than typically found diffuse type.

Conflicts of interest none with any of the authors.