Colon cancer is a major cause of morbidity and mortality in the developed and developing countries [1]. There is a wide variation in the incidence and mortality rates, due to gastric and large bowel cancer across geographical areas. This may be due to diversity in the environment and ge-netic make up. Colon cancer usually begins with the for-mation of benign growth such as polyps and often there are no early symptoms. Since it is a leading cause of can-cer death, its prevention is of great importance throughout the world [2]. Stomach cancer is the second most frequent cancer and the second leading cause of death from cancer [3]. It can develop in any part of the stomach and spread to other organs. A significant increase in its incidence has been reported for both men and women over the last 2 decades [4,5].

Alteration in tissue zinc levels has been documented in patients with upper gastrointestinal tract malignancies more frequently than with colonic cancer. However the precise relationship of tissue zinc in the carcinogenesis is not well elucidated. The increased awareness of the role of zinc and its interactions in metabolism and disease suggested the need for a reliable method to analyze zinc in biological samples, quickly and efficiently. In our labo-ratory, Atomic Absorption Spectrophotometry has been successfully used for the analysis of zinc in biological samples. [6]

The question of whether zinc concentration is increased or decreased in the cancerous tissues in comparison with the non –cancerous tissues has not been answered yet, due to the fact that the data available in this field is rare and has contradictory results. Such conflicting reports may be attributed to multiple factors such as tissue preparation, different sensitivities of analytical methods, basis of ana-lytic methods and sources of contamination and difficul-ties in differentiating cancerous and non cancerous tissue.

Since zinc deficiency or excess is implicated in the devel-opment or progression in some cancers, we assessed tis-sue zinc levels in the non-malignant (normal) and the ma-lignant tissue of the stomach or the colon obtained from the same individuals at the time of surgery for comparison in Indian population. This study also compared the tissue zinc levels in various parts of the stomach or colon in pa-tients with stomach or colon cancer, at different differen-tiated state.

The study group was comprised of 97 patients of biopsy proven gastric (n= 87) or colon (n=10) malignancy, con- firmed by gastroscopy or colonoscopy and histopathology testing in our hospital. This study group was submitted to a detailed clinical examination and necessary investiga-tions to diagnose and stage the disease. The group con-sisted of 20 males and 77 females with an age range of 35-80 years. This study was approved by the Institutional Review Board of our hospital.

Histological normal and neoplastic human gastric or co-lon tissues were obtained from the same individual at the time of surgery and sent to the pathology laboratory for diagnosis and part of the tissue was sent for tissue zinc analysis using the Atomic Absorption Spectrophotometer (AAS). All tissue samples were resected specimens ob-tained from patients undergoing removal of the malignant part of the stomach or the colon. The specimens were col-lected and stored in polypropylene containers at -20º C until the time of analysis.

Necessary precautions were undertaken to avoid contami-nation with extraneous zinc. The tumor tissue was care-fully trimmed of all normal tissue and fat to ensure only cancerous tissue in the test sample. 40-80 mg of sample was immersed in a solution containing equal volumes of nitric acid and perchloric acid and processed for tissue zinc estimation as described [7]. Tissue zinc analysis was carried out using the Perkin Elmer AAS model -100. The concentration of tissue zinc was determined in μg/g dry weight using an appropriate blank for correction of zinc content in the acid.

Stock zinc standard (1002 mg/ml) was purchased from Sigma chemical company. Deionised water was used for all purposes. All other reagents were of analytical grade.

Data are expressed as Mean ± SD. Differences between groups were analyzed using Paired T- Test and ANOVA. A difference was considered statistically significant when the probability associated with it was less than 0.05 (p<0.05)

The analysis of the tumors of the stomach was performed according to the following histologically sub-classifica-tion: well (n=4), moderately (n=30) or poorly differenti-ated carcinoma (n=53). (Fig 1a, b) 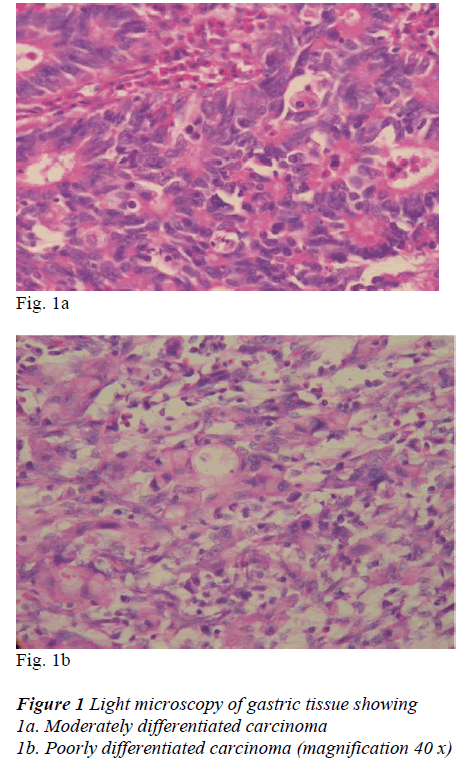 The analysis of the tumors of the stomach was performed according to the following subsite allocations –fundus, body, antrum, whereas tumors involving body and antrum were grouped together as body plus antrum. Out of the total 87 patients, the anatomical location of the cancer were as follows: 37 patients (42%) showed carcinoma of the antrum, 9 patients (10%) the body and 5 patients the
fundus, 11 patients (13%) carcinoma of body plus antrum. Out of the remaining patients, 14 patients (16%) under-went distal gastrectomy and 11 patients (13%) total gas-trectomy. (Fig 2) 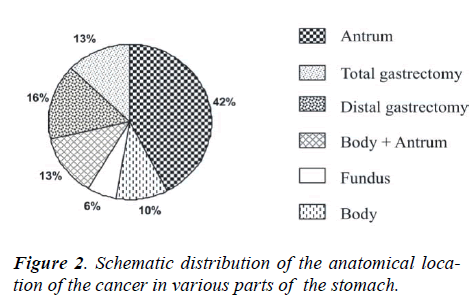 Figure 2: Schematic distribution of the anatomical loca-tion of the cancer in various parts of the stomach.

Table 1 shows the results obtained for tissue zinc in paired non-malignant and malignant stomach tissue in all
the patients and in the various histological grades of gas-tric carcinoma. The mean tissue zinc level in the malig-nant tissues was significantly decreased (68%) as com-pared with the non cancerous tissues (226 ± 78 vs. 673 ± 140 μg/g dry weight, p<0.01) as shown in Fig 3. Further, there was a 36% significant decrease in tissue zinc levels between poorly differentiated carcinoma and moderately differentiated carcinoma (183 ± 50 vs. 288 ±61μg /g dry weight; p<0.01) as shown in Fig 4. 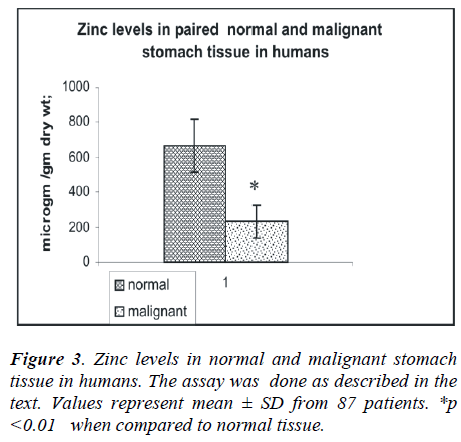 Figure 3: Zinc levels in normal and malignant stomach tissue in humans. The assay was done as described in the text. Values represent mean ± SD from 87 patients. *p <0.01 when compared to normal tissue. 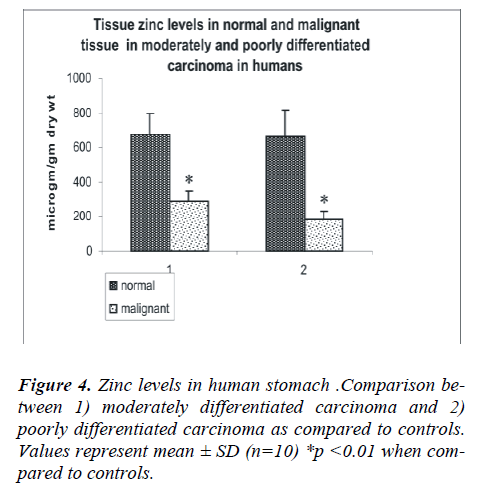 Analysis was carried out with regards to tumor sub –site class in the stomach as well. Table 2 shows the compari-son of mean tissue zinc levels in paired malignant tissue and non malignant tissue in various parts of the stomach. The accuracy of the analysis of zinc was studied byincluding a quality control sample for plasma zinc with every batch of samples analysed for tissue zinc.

The anatomical distribution of colon cancer according to tumor sub-site in 10 patients was as follows: four were from the right colon, one from the left colon, three from the colon as a whole and two from the ascending colon. Analysis based on histological subclass was classified as moderately and poorly differentiated carcinoma (Fig.5 a, b). As shown in Fig 6, the mean tissue zinc level of the malignant tissue showed a 66 % significant decrease when compared with the non cancerous tissue of the same patients (239 ± 88 vs. 666 ± 109 μg /g dry wt; p<0.01). 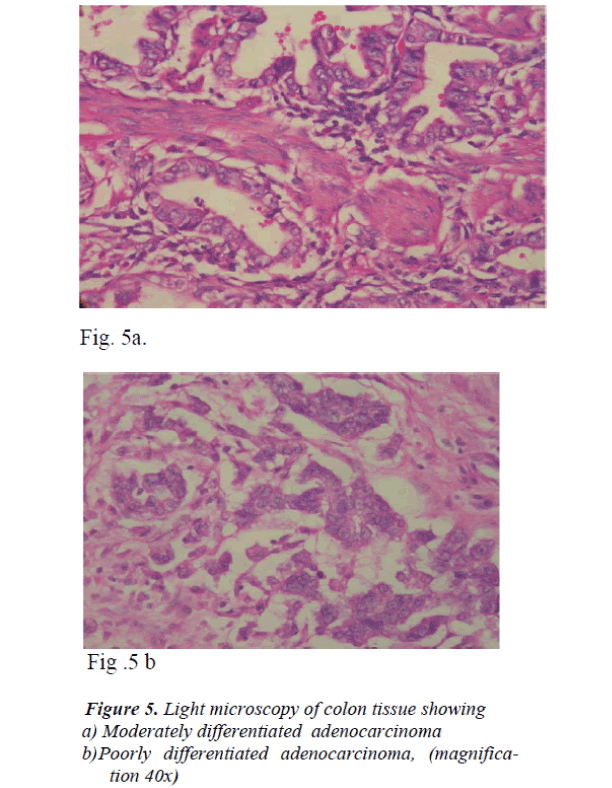 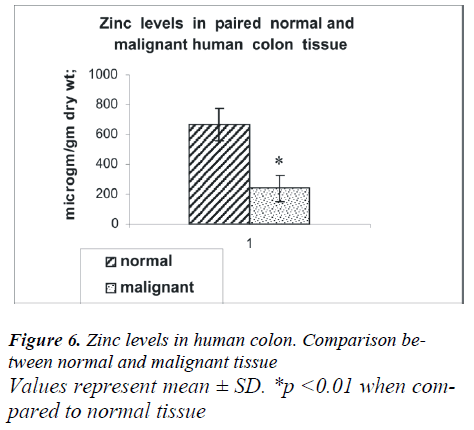 Zinc plays an important role in cellular physiology and this element functions as a specific activator of many en-zymatic reactions [8]. Zinc deficiency is implicated in the development and progression in some cancers [9]. Most of the studies carried out in patients with stomach cancer or colon cancer were on plasma zinc levels. In various studies reported earlier, a decrease in plasma zinc levels in carcinoma of the digestive system was observed [10]. Our current study provides data on zinc levels in the paired cancerous and non-cancerous tissue from patients who were diagnosed to have malignancy of the stomach or colon. The study shows a significant decrease in mean tissue zinc levels in patients with stomach cancer as com-pared with their paired non cancerous tissue. The decrease in mean tissue zinc level in the carcinomatous stomach tissue was related to the advanced stage of tumor. Patients with poorly differentiated carcinoma, showed a much lower mean tissue zinc level as compared with their paired controls. These findings were statistically signifi-cant. Additionally zinc level in the cancerous tissue in patients with poorly differentiated carcinoma was signifi-cantly lower than that in the cancerous tissue in patients with moderately and well differentiated carcinoma. The fact that the mean tissue zinc decreased gradually from normal to well, moderately and poorly differentiated car-cinoma as the gastric cancer advanced is clinically impor-tant. Out of the total 87 patients included in this study, there was a higher incidence of poorly differentiated car-cinoma (61% of patients) on diagnosis. It was also ob-served that the majority of the stomach cancers were found to originate from the antrum (43.7%) in our patient population. A significant decrease in tissue zinc level was also observed in colon cancer tissue as compared with the paired non malignant tissue of the same individuals. It was observed as well that the decrease in tissue zinc in the colon was greater as the cancer advanced.

Neoplastic diseases have been reported to lead to changes in zinc metabolism as evidenced by alterations in plasma zinc concentration (5). McBean et al suggested that the diseased condition may lead to an overall zinc decrease in the tissues [11]. The general trend towards a gradual de-crease in zinc concentration in the malignant tissue, as demonstrated in our present study, is in agreement with the results observed in cancer patients, obtained by Kew and Mallet that zinc concentration in cancerous liver tis-sue is significantly decreased as compared to the normal liver tissue [12].

Very few studies have been carried out with respect to tissue zinc in patients with colon cancer. Our results are consistent with Xiao and Henderson’s observation that tissue zinc levels were significantly lower in colon cancer patients than in normals [13]. A few studies report find-ings contradictory to ours [14]. The study by Gregoriadis et al (1983) showed there was no appreciable difference in zinc levels between the normal and the cancerous colo-rectal or stomach tissues [15]. In the study reported by Ehud et al (1983), higher tissue zinc levels were observed in breast carcinoma, whereas there was no significant dif-ference, in the overall concentration between malignant and normal tissues in the large bowel and reproductive organs [14]. Potential reason for these discrepancies may be due to analyzing trace element, difficulty and the specimen contamination. In the absence of any reference for the elimination of extraneous zinc contamination in earlier reports by others, it could be assumed that the higher values obtained may be due to zinc contamination. Methodological differences may also play a role. Close attention to procedural details in zinc assay may help to a large extent in eliminating these discrepancies.

To summarize, the biochemical changes accompanying histochemical findings in this study demonstrated as a multifold decrease of zinc in the carcinogenic tissues. There is an inverse association between the tissue zinc levels and carcinoma of the stomach or colon. It is also observed that the decrease in tissue zinc levels in the can-cerous tissue of the stomach or colon was related to the advanced stage of the disease. We also found that, the relative percentage of tumors in the antrum is higher as compared to that in other parts of the stomach. This study confirms the decreased zinc content in the cancerous tis-sue suggesting the potential role of zinc in cancer etiol-ogy. The exact mechanism responsible for the alterations in tissue zinc in patients with colon or stomach cancer is not clear and requires further investigation.