The wide range of increasing global warming makes the human being to lead unpredictable life style. Self-monitoring of life care is not an easy task for individual due to machine life style this leads unwanted human life death. Many researchers are involved to develop a pain free module this is one of among them. This paper proposes a wearable pain free heart arrhythmia detector module built with PIC microcontroller and to minimize the cost factor too. To overcome complexity the heart arrhythmia system, the proposed module has many features like easy wearable, pain free, no need of taking blood sample and less time consuming. The proposed module can able to monitor beat to beat interval series and obtain the result form Ballistocardiographi (BCG) signal and we can able to record the heart arrhythmia during sleeping and unconscious patients. Our results suggest it is a reliable module and it will assist the individual and clinician for easy heart arrhythmia detection.

The unpredictable health of human being would not be stable anything can happen any time due to against of natural food habit and global warming. A survey states more than four million of peoples are high risk of heart attack leads to invaluable asset human life. An integration of a soft robot with optical fiber based proximity sensor for beating heart tracking in minimally invasive surgery (MIS). Tracking is made for employing a position control method [1]. Proposed mobile health to monitor heart beat IPI-based security keys in the context of entity authentication investigate several aspects that should be considered in practice, including subjects with reduced heart-rate variability [2]. An alternate to conventional measurement tools for heart beat system is proposed in this article called as multiset canonical correlation analysis. With several advantages like to recover buried heart beat signal accurately [3] Proposed a hand wearable heart beat monitor to monitor temperature, running state visualization and to validate human comfort sensation in real time [4]. Developed a wearable wrist band type transducer to detect pressure signal form heart beat and stating the accuracy of the proposed system [5]. The author focused on biomedical processing signal to extract information from neurons and to develop heat beat monitor system in field of FPGA platform for real time monitoring [6]. A remote patient health monitoring is the recent trend in biomedical field. Main issues related with such system design are low power and portability. a data acquisition system to measure body parameters like temperature and heartbeat is developed and experimented [7]. Focused on sleep disordered patients monitoring during sleep, and cardiac activity monitoring of heart beat is focused with BCG signal [8]. This research article focus a low cost wearable pain free heart arrhythmia detector mould which was built with PIC microcontroller and it can able to analysis the beat to beat interval series and obtain results from the BCG system.

Arrhythmia is a term refereed to cardiac rhythm that has changed from its original rhythm i.e. sinus rhythm. Due to disturbance of in impulse formation or conduction both leads to irregular heart functioning. Normal respiratory sinus arrhythmia is natural periodic variation in RR intervals that is related with breathing. While impulse formation be ectopic with rhythm regular or irregular with fast or slow heart beat. In such a time the detection of abnormal cardiac rhythms from normal heart beat became a critical task to monitor and record. Many researchers proposed many algorithm some of them like dequential hypothesis testing, multiway sequential hypothesis testing and threshold crossing intervals. These approaches are quite complex in nature the idea behind this proposed method is monitor heart rate variability (HRV) i.e. beat to beat heart rate for individual health and with additional feature of recording facility.

The pre-processing can be carried out in two ways the foremost step is to extract tachograms form ECG recording and secondly tachograms are to be divided into small segment of thirty two RR intervals and yields a total of three thousand fifty six segments. Time domain analysis is carried out from the data obtained from tachogram. Standard deviations of all values are calculated such as normal to normal and normal to deviation. Another analysis of time to frequency analysis is carried out which is calculated with Fourier transform for each time analysis. These values are converted in to ADC values and it is given to PIC microcontroller through I/O ports. Figure 1 shows the wearable sensor. 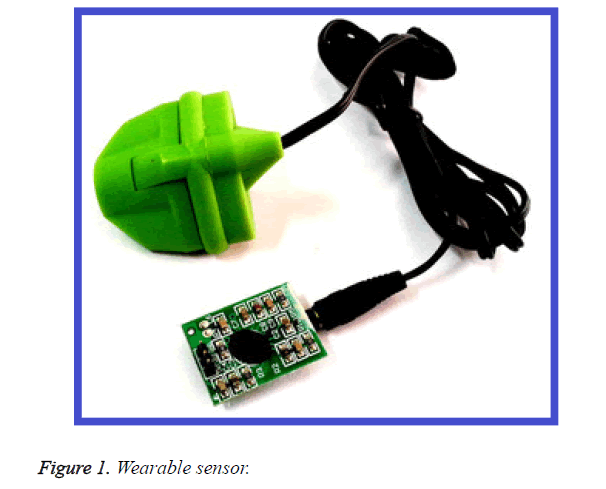 The standard deviation for all normal to normal RR intervals can be derived as,

Where h(t) is short time window, around t=0 and f=0. Similarly the time to frequency can be derived as,

Where x*(t) is the complex conjugate of signal and g(v,τ) is an arbitrary function called kernel. The Figure 2 shows the normal and abnormal RR intervals of heart arrhythmia. Arrhythmia detection for both time domain and t-f analysis need 2000 segmented data set as test set this can be implemented as look up table. 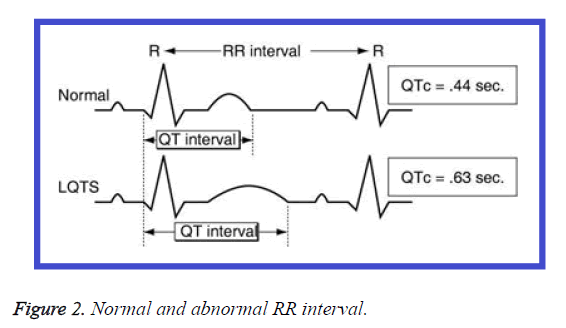 The BCG recordings are normally recorded at sleep and results were obtained after baseline night expert’s clinician score the polysomnographic data standard in standard procedure. The multichannel BCG recording can be record according to respiration and moment activity (Figure 3). These data are processed with mathematical techniques to obtain polynominal coefficients. The calculation of each beat will be calculated as 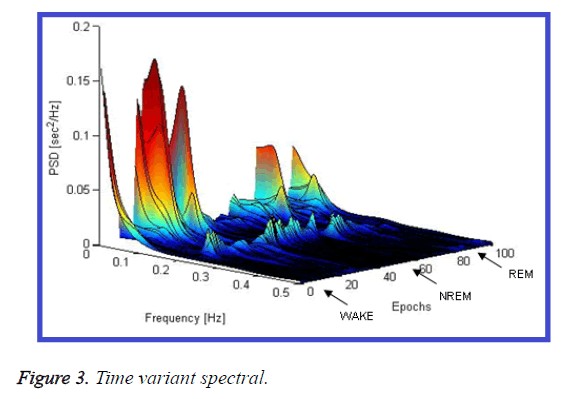 Where ak represent the coefficients of the model, n stands for time p is the filter order. The predicted error can be calculated as,

The wearable sensor module helps to monitor the body temperature, heart rate and pulse rate of patient and help to record and display were as the conventional clinical use of a doctor. The proposed module is simple so that the individual can able to monitor their heart arrhythmia. In conventional existing methods, patients’ body temperatures and heartbeat rates need to be monitored regularly, which is usually done by doctors or other paramedical staff. They observe the body temperature and heartbeat rates whether 72 times per minute.

The doctors and other hospital management staff keep a record of the body temperature and heartbeats of every patient.

The proposed module includes wearable sensor and various components such as PIC microcontroller PIC16f877a, regulated power supply temperature sensor, heart beat sensor and LCD display. The working of this monitoring system project is illustrated with the help of a block diagram shown in Figure 4, which includes various blocks such as a power-supply block that supplies power to the whole circuit, a temperature sensor that calculates patients’ body temperature, and a heartbeat sensor for monitoring heartbeats of the patients. 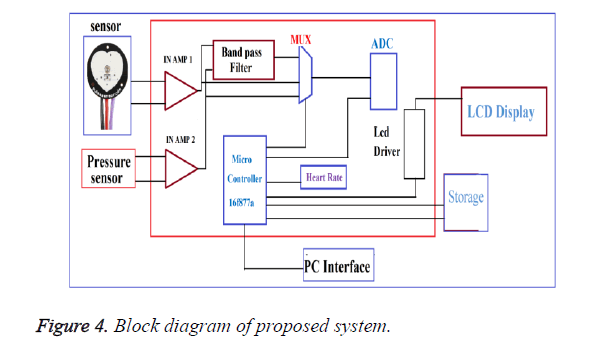 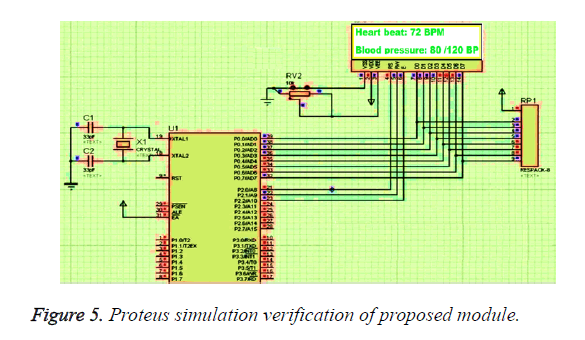 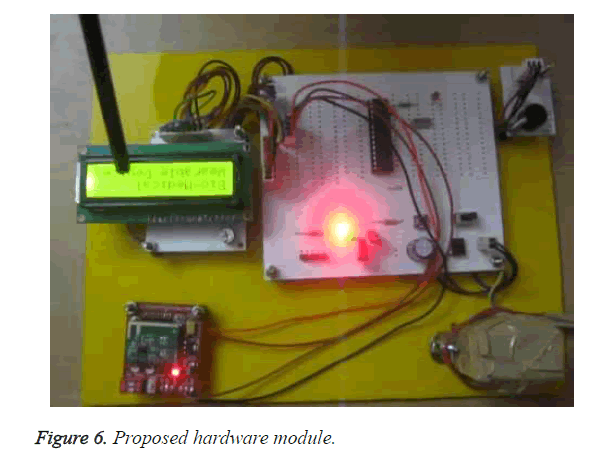 This article proposes a wearable pain free heart arrhythmia detector module which is built with PIC micro controller. The module has benchmarked a greater sensitivity under different conditions and results yields to be accurate. Since it is implemented with PIC microcontroller the cost of system is reduced and leads a greater advantage over the conventional methods. With the proposed module it can able to measure the blood pressure and heart arrhythmia variation can be monitored self. Our results suggest it is a reliable module and it will assist the individual and clinician for easy heart arrhythmia detection.