Currently, water is very valuable, so should be used optimally. Planning for optimal use of water and soil resources will protect these resources and bring about increased production, growth in farm income, and enhancement of rural economic prosperity. This study was performed with the aim of improving management of water resources on Pakdasht Plain lands using a combination of typical and linear goal optimization techniques that in this study are used to examine optimal allocation of water and prioritization of cultivation patterns with respect to water consumption. In this study, the effects of limits on irrigation on the products of system cultivation patterns have also been evaluated, with results that indicate that Option 16, with a 0.33 profit on consumed water, produces the greatest financial efficiency, while Option 22 shows the lowest financial efficiency of 0.22. The findings suggest that the planning axis (water profit and productivity or sustainability in use of groundwater resources) plays a key role in the process of managing and allocating system water resources.

Because Iran is located in a warm and dry region, most plains of Iran require proper management of water resources and optimization of water consumption to maximize exploitation of limited water resources [1,2]. A sustainable water management policy for agricultural irrigation is to promote water use in such a way that society’s needs are met to the greatest extent possible, both now and in the future. Linear Programming (LP) and principal components analysis have long been used to select descriptive variables for relating runoff to climate and watershed descriptors [3,4]. Statistical prediction methods, on the other hand, rely on past historical data for prediction [5-9]. LP approaches have always been used to obtain optimal strategies, such as water-allocation patterns, crop-planting plans, and canal-expansion schemes, with the objective of maximizing net benefit [10]. One of the main solutions in the agriculture sector, the largest consumer of water resources, is conjunctive use of surface and ground water resources. Launching a suitable and optimal cultivation pattern undoubtedly can have a significant effect on reducing water consumption and elevating profits in an agriculture system [11-15]. The main aim of this study is development and application of a model for managing surface and ground water resources and achieving an optimal cultivation pattern.

The Pakdasht Plain is located in the northern part of Iran in the southern ranges of Alborz, 40 km southeast of Tehran, between 33° and 51° up to 40° and 41° of eastern longitude, and 5° and 35° up to 30° and 35° of the northern latitude [16]. The area under cultivation by the irrigation system is approximately 50000 hectares, with a soil suitable for agriculture resulting from the deposition of Jajrood River sediments, as shown in Figure 1 [17]. 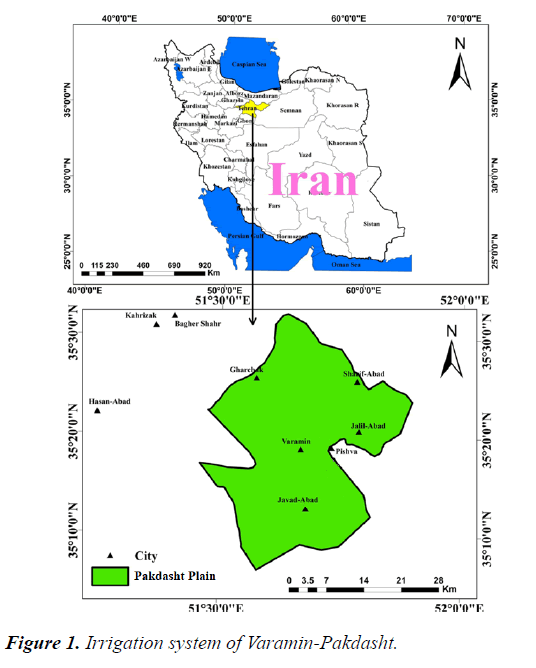 This method assumes that the climatic needs of the product are met, and water, nutrient, salinity, pests, and diseases do not affect the growth and potential function of the product (Ym). The cultivation pattern of the region should be used to calculate the maximum and actual performances. The common pattern in the Pakdasht Plain includes wheat, barly, corn, alfalfa, cotton, and cucurbits, irrigated by Faro and band irrigation methods.

The general structure of a fractional multi-objective goal programming model can be formulated as shown in Equation 1.

is the total profit for the total water consumed (productivity), and

is the ratio of total groundwater to the total water consumed.

The first model involves linear programming (LP1) for profit maximization. This model has been developed considering different values of reduction or increase of withdrawal from groundwater [19]. For all of the above-mentioned options, the LP1 model was written and the values of areas of cultivation and consumed water were compared.

The second model involves linear programming (LP2) for minimizing use of groundwater. According to the authorities of irrigation affairs of the region, if the extent of withdrawal is reduced by 25% in comparison with the current value, the water balance of the plain will reach zero [20]. In the third model, linear goal programming (LGP) was used to simultaneously maximize profit and minimize groundwater use. The aim was to determine LP1 and LP2 values, with each value set as a goal for achieving these conditions as closely as possible, while considering the importance of each.

For the second to tenth options, different amoiunts of groundwater reduction were applied, and the profit and areas under cultivation were compared with one another. These options were chosen to preserve or improve the situation with respect to groundwater aquifers. In these options, reductions ranging from 60% to 0% were considered. The total groundwater volume for this purpose varied between 179.44 and 448.61 million m3 per year for the second to tenth options.

Table 1. Introduction of the studied options and their areas under cultivation.

To obtain values for the optimal cultivation areas, each of the above options was written and solved using three models.

For all options, the entire volume of available surface water in the plain (141.92 billion m3/year) was used. The maximum profit was associated with Option 15, representing 25% more groundwater withdrawal, about 560.76 million m3/year, in relation to current conditions. In this option, the profit is 1.52 times as large as that for the current state (2162 billion Rials). Implementation of this option is only possible if the groundwater aquifers could be fed by resources other than the internal resources of the plain, otherwise we would observe a dramatic decrease in the water table level of Pakdasht Plain.

Minimum profit occurs for Option 2, where groundwater withdrawal decreases by 60% (179.4 million m3/year) in comparison to the current state. For this case, the profit reaches 0.57 of the current value (816.4 billion Rials). Implementation of this option, representing a descending trend in water table level of the region in the upcoming years, would be likely to ultimately result in devastation of the plain. For other options with elevated groundwater withdrawal (Options 2 to 15), the profit grows. This increase grows faster in Options 2 to 6 than in options 7-15. In other options (16 to 22), if low irrigation is implemented, although the area under cultivation grows, the profit diminishes significantly. The results obtained from the linear model of profit maximization and areas under cultivation are shown in Table 2 and Figure 2.

Table 2. The areas under cultivation of linear programming for profit maximization across different options (hectares). 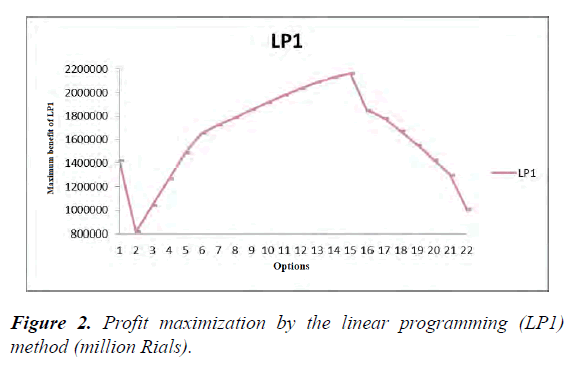 As shown in Table 2, with decreased groundwater withdrawal and without applying reduced irrigation, the area under cultivation in the plain decreased, and in the minimum state it reached 28,635 hectares in Option 2. As expected, in this state the areas under cultivation approach the lower limit set for them, and the area under cultivation of the crops decreased significantly with huge water consumption. By applying reduced irrigation and associated water stress by up to 40%, the total area under cultivation reached 88,408 hectares (Option 22). If this option and other options are investigated, the deficit of irrigation water for the mentioned plain becomes more evident. Implementation of option (22), considering its low water productivity (0.17), would only be recommended for reasons other than profit, perhaps for cultivating a large area of the plain to improve employment conditions.

Based on the goal values obtained by solving the above linear models (LP1, LP2), using goal programming the resulting composition and area under cultivation of the region’s crops are given in Table 3.

Table 3. Composition and area under cultivation of region’s crops resulting from the linear programming method (hectares).

These values are intermediate limits for obtaining maximum profit and minimum water consumption. Indeed, attempts have been made to achieve maximum profit by consuming only a minimum level of groundwater. Options 2 to 5 cannot be solved by goal programming because their goals are in contradiction. The goal value for options 6 to 15 is a constant, so the profit and areas under cultivation are the same for all. In these options, groundwater withdrawal has been varied over ranges between 0.8 of the current withdrawal in Option 2 and 1.25 times larger than as the withdrawal in Option 15. This suggests that the volume of groundwater withdrawn varies from 448.89 million m3 in Option 6 to 560.76 million m3 in Option 15.

Based on Tables 1-3, it can be deduced that with lesser irrigation, the performance of the crops has diminished, and the descending slope of these changes is different for different products. For example, at a water stress of 5%, the minimum crop reduction was associated with cotton where, by applying 5% lower irrigation, we observed only a 4.2% reduction. This means that cotton performance under complete irrigation conditions decreases from 4096.56 to 3922.48 kg/hectares under 5% stress conditions. At this stress, the maximum performance reduction was associated with barley, a 5.8% reduction from 4459.53 from 4731.62 kg/hectares. Indeed, the most sensitive crop in terms of water stress level of 5% is barley, while the most resistant is cotton. For other products, we observe 5.2% reductions.

Comparison of Options 2 to 15, representing complete irrigation, indicates that with increased groundwater withdrawal, the area under cultivation has grown, and the net profit in turn also increased. The maximum profit of 2162.47 billion Rials can be obtained in Option 15 with a 25% increase in groundwater withdrawal, with the area under cultivation increased by 58,623 hectares.

In this study, the effect of application of reduced irrigation on crops in the system’s cultivation pattern was examined, with results indicating that, for implementing Options 16 and 17, corresponding to 5 and 10% reduced irrigation, the extent of groundwater allocation decreases from 448.61 to 338.108 and 317.634 million m3/year, respectively, representing 26.63 and 29.2% decrease in withdrawal.

As mentioned previously, for a 25% decrease in groundwater withdrawal, the plain’s balance has reached zero, and the level of groundwater aquifers stays at a constant value.

The results also indicate that Option 16 has represents the maximum financial efficiency, with a profit-to-water consumed ratio of 0.33, while Option 22 represents minimum financial efficiency with a value of 0.2225. Option 22 with a groundwater-to-total water consumed ratio of 0.5518, and Options 6-16 exert the minimum and maximum amounts, respectively, of pressure to groundwater resources. This suggests that, although increased groundwater withdrawal causes incremental profit, because it also leads to elevated consumption of water resources, it will bring about diminished water productivity.

These research findings suggest that the planning axis (profit and water productivity or stability in use of groundwater resources) plays a key role in the process of management and allocation of water resources of the system, and under abnormal conditions and crises resulting from drought or climate change, a different approach would be demanded.