Methods: In this study, we used two different ways including vitrification freezing and slow freezing to cryopreserve the mouse oocytes and elucidated how the cyro-procedures affected the survival, development potential and cytoskeleton of oocytes. The development of oocytes was evaluated on the formation of 2-cell and blastocyst. The cytoskeleton was determined by the immunostaining for the biomarker of Spindle and chromosome.

Vitrification is a non-equilibrium method of cryopreservation. It transforms cells into an amorphous glassy state so that it prevents the formation of ice crystals [6]. In contrast to the study on the cryopreservation of ovarian tissue and whole embryo, the research on the oocyte cryopreservation is still lagging behind [7]. This is probably due to the lower success rate in ART when using the frozen oocytes.

The cell survival after freezing depends on the multiple factors, including biochemical and physical cellular properties. Since the oocyte has the delicate meiotic spindle and the cytoplasm contains a high proportion of water, ice crystal formation lead to the lower survival rate after freezing and thawing [8]. Also, cryopreservation of mature oocytes may lead to hardening of the zona pellucida (ZP) and then impairing the fertilization [9]. Recently, using smaller amounts of vitrification solution have recently been reported [10,11]. Using this method, improved developmental rates of thawed bovine oocytes have been observed. In order to evaluate the effect of different freezing methods on cryopreserved ovarian tissue or oocytes, it was reported that vitrification of cleavage stage day 3 embryos induced higher live birth rates compared to the slow freezing [12]. However, systematic comparison elucidating the effect of cryopreservation on oocytes is still lacking.

GV oocytes were cultured in MEM medium for 24 hours. The drops were covered by mineral oil. In vitro maturated metaphase 2 (MII) oocytes were inseminated and the fertilized embryos assessed until the hatching blastocyst stage.

Oocytes subjected to cryopreservation were sequentially washed in PBS with 20% FBS, SI with 10% EG and 10% DMSO, and St with 20% EO and 20% DMSO. Then, the cells were transferred to holding medium (TCM199 + 20% FBS), and subjected to sequential equilibration in vitrification solution 1 (VS1) and VS2. After equilibration, oocytes were loaded into SOPS freezing tubes and immediately immersed in liquid nitrogen. For the thawing, the cryopreserved oocytes were transferred to S1 with sucrose at room temperature for 3 mins. Then the oocytes were moved to S1 at room temperature for 3 min and gradually increased the temperature to 37°C. The thawed oocytes were cultured in MEM medium for 1-2 hours before the further experiment.

Cells were fixed with 4% paraformaldehyde for 40 mins and then permeabilized with 0.5% Triton X-100 for 15 minutes. Then, the cells were blocked in 1% BSA in PBS containing 0.1% Triton X-100 for 1 h. Then samples were incubated with mouse anti-TUBB antibody (Abcam) at 4°C overnight. FITCconjugated secondary antibody was used to visualize the positive signals. Chromosomes were stained with DAPI (Roche) for 10 min. After staining, samples were mounted on glass slides using vectashield mounting medium (Vector Labs) and examined with a confocal laser scanning microscope (Leica) (Figure 1).

Figure 2. (A) Vitrification and slow freezing differentially affected the survival rate of oocytes cryopreserved at GV but not the MII stage. (B) Oocytes cryopreserved at the different stages did not show the significant difference in survival rate by using the same freezing method. The statistical difference was determined by unpaired student’s t-test. ‘ns’ represented not significant, and ‘*’ represented p<0.05.

Figure 3. Vitrification and slow freezing differentially affected maturation (A) and fertilization (B) of oocytes cryopreserved at GV but not the MII stage. (C) The ratio of blastocysts was significantly higher when using vitrification freezing than slow freezing for oocytes cryopreserved at GV and MII stages. The statistical difference was determined by unpaired student’s t-test. ‘ns’ represented not significant, ‘*’ represented p<0.05, and ‘**’ represented p<0.01. 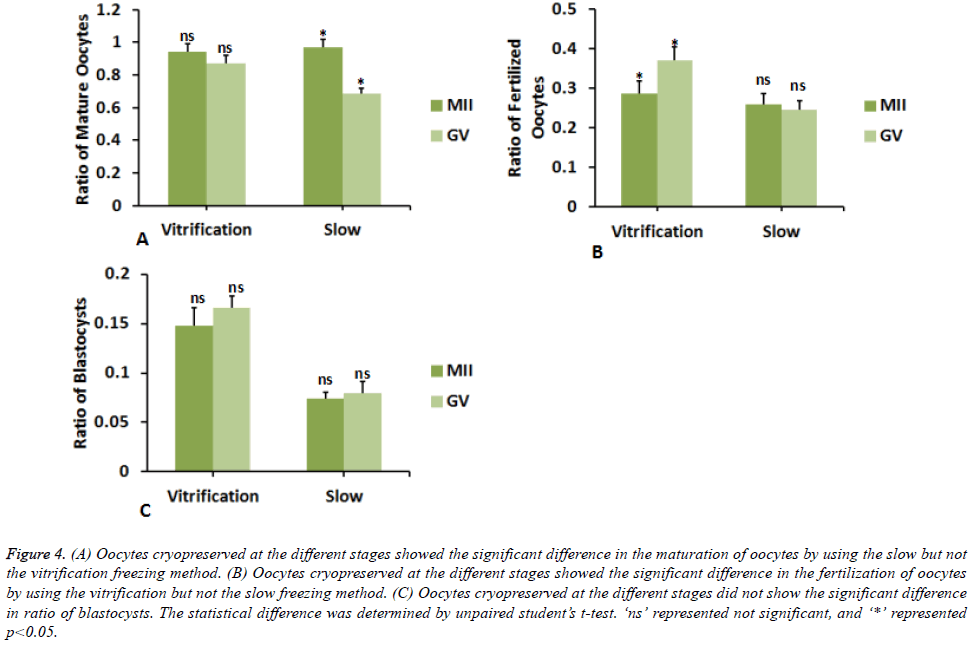 Over the last decade, several methods for cryopreservation have been used in ART treatments. The traditional slow freezing, which results in freezing without degrading and deforming the cells with little toxicity and osmotic damage, suffered from the ice crystal formation [3]. While a new vitrification freezing method is considered as a method which can maintains good quality and functionality of ovarian tissues [5]. Despite the numerous progresses made in the cryopreservation techniques in ART, the freezing methods applied in the oocyte cryopreservation and their effect on the cellular property of oocytes is still elusive to us. Therefore, this study provided a clear elucidation that different freezing methods could differentially affect the survival, maturation, and development of oocytes. Our results showed that the survival rate of GV oocytes was higher in vitrification than the slow freezing (Figure 2A). This is probably due to the apoptotic alteration in the oocytes cryopreserved at different stages. Previous study reported that slow freezing could initiate the lower expression level of anti-apoptotic genes and higher expression level of pro-apoptotic genes, compared to the vitrification [13]. This conclusion may explain when the oocyte survival rate was differential between slow and vitrification freezing in our study. We also found that the developmental potential was affected by different freezing mathods. The blastocyst ratio in the vitrification group was much higher than the slow freezing group (Figure 3C). Formation of blastocyst is a critical step in the pregnancy and afterwards the embryo will undergo implantation, establishing the connection between the mother and embryo [14]. Therefore, studying the effect on cryopreservation on the blastocyst formation is of great importance to increase the success rate of ART application. In the future work, the molecular mechanism involved in the differential ratio of blastocyst formation will be emphasized. Previous reports indicated that OCT4 promoter methylation profile [15], IGF2 and Glut3 [16] exerted effect on the blastocyst formation in vitrification freezing. These are important factors to be studied in the future work regarding the mechanism of alternation in blastocyst formation after oocyte cryopreservation.

The study is funded by Shanghai Key laboratory for Assisted Reproduction and Reproductive Genetics (12DZ2260600).