Objective: Mental diseases cripple the human life. But for everyone a disease free life is desirable. Thus to avoid the unwanted situation, researchers are continuously looking for the remedy of the above. One of the ways for the same is to see whether by proper selection of daily food the desired goal can be reached. The objective of this work is to make a quantitative estimation of the amino acids supply per day from the diet chart proposed, because the amino acids play important role to safe guard against so many mental diseases. Actually, the medicines for mental illness contain high dose of amino acids while a mild dose can act as a preventive for the diseases. Method: In estimation of amino acids in a proposed diet, the quantities of tryptophan, methionine, lysine etc. in each item of the diet has been evaluated and added them up to get the daily intake of the acids. The amount of amino acids obtained thus far has been compared with the daily intake amount necessary to avoid mental diseases. Results: The result shows that the quantities of amino acids obtained daily from the proposed diet successfully cover the daily intake amount necessary to guard against some mental diseases. A comparison of the amount of amino acids obtained from the proposed diet with the medicinal doses for mental diseases shows that the former amount lags much behind the latter. Conclusion: From the result of investigation it may be concluded that from a proper choice of daily diet so many mental diseases could be avoided but when people are attacked with mental diseases diet alone cannot cure the diseases and hence medicinal therapy is urgent.

Mental illness is a matter of great concern throughout the world. According to Geneva report [1] one in every four people in the world will be affected by mental or neurological disorder at some point of time in their lives. Presently, about 450 million people are suffering from the above condition.

The release of DSM5 has added to the concern of mental disorder in the world.

In Indian perspective, the mental illness poses a gloomy scenario. As per WHO report [2] 7.5% of Indians suffer from mental disorders.

The NIMHAN’S study [3] focuses that 13.7% Indians are mentally ill.

An overall study of mentally depressive patients in the world [4] India finds its position after U.S.A and China.

The severity of mental illness has ignited the eagerness among scientists and doctors to search for the cure and prevention of the above because ill mental health robs the patient of his youth, activity and peace of life.

So many medicines have been discovered for various symptoms of mental diseases which can be successfully prescribed by the doctors to the patients. For that the therapists have to make a keen observation of the patients to select the proper medicines with optimum doses which is a very difficult task.

The other difficulty, the doctor’s face [5] is that every medicine has got side effects for which, very often the patients are reluctant to take the medicines and continue with the same.

So along with medicines, psychoherapy plays an important role to convince the patients of urgency of taking medicines tolerating the pain of side effects.

So, from the very childhood precaution should be taken so that mental illness does not occur to any person.

Apart from social and environmental pollution which could give rise to mental disorder, lack of selection of proper food could be one of the main reasons for the disorder mentioned above.

Here come the roles of the dietitians and nutritionists to tackle the unwanted situation.

Proper advice for the food habits of the children and grownups could help them avoid mental disorder [6]. The protection of mankind through suggestion of optimum food against mental illness has the beauty that it has no side effects. Once one is completely affected with mental disorder, food alone cannot help the patient overcoming the illness. In that situation medicine is a must for the patient.

Thus a dietician has to recommend foods which contain sufficient amino acids.

In this context, an investigation in the sufficiency of the above in a vegetarian diet [7] could be important.

Since, the diet above has found its successful presence in so many aspects [7-11], it is most tempting to find its ability to supply the optimum amount of amino acids. This optimum amount when supplied does not cause side effects and can be considered as medicine without side effects against mental disorders.

In this article, the amount of amino acids, obtainable from the daily diet [7] has been evaluated.

Amino acids estimated from the diet consist of two types like essential and nonessential ones.

Since the diet proposed involves variety of food that contains legume, vegetables, cereal, dairy products and fruits, estimation of the amount of the above acids from each element of the diet has been calculated and added them up to get the net result.

In the present investigation, estimation of the amount of amino acids present in every item of the daily diet has been made separately.

They are then added up to get the daily intake of the above from the proposed diet.

The daily intake of the amino acids necessary as safeguards for mental diseases [12-14] have been found out. The medicinal doses [15-19] of the above amino acids have been studied and incorporated in the investigation. The results have been presented in Tables 1 and 2.

Table 2 gives the maximum amount of the above respectively.

From Tables 1 and 2, it is found that the amino acids available from the proposed diet successfully cover the daily intake amount both minimum and maximum wise. This indicates that any person following the diet is guarded against the mental diseases which arise out of the deficiency of the above acids.

The medicinal doses for the amino acids are much higher than the daily intake amount, as well as, the amount obtainable from the diet, which means that when somebody is affected with any mental problem he cannot be cured with diet only, some medicine is also necessary. The minimum daily intake amount for methionine and lysine are more than the minimum amounts obtained from the daily suggested food. So for successful application of the diet one must take care so that the maximum amounts of the above acids are consumed by a person by proper selection of diet elements. Another point to be mentioned here is that the minimum medicinal doses of methionine and lysine are lower than the amounts obtained from the diet as well as the daily intake amounts [20].

But that is not a very significant problem; the only care to be taken is to prescribe larger doses of the above when a person habituated with the proposed diet is affected with diseases for lack of methionine and lysine.

The results of Tables 1 and 2 are depicted in pie-charts of Figures 1-6, where approximations up to two decimal numbers have been made while drawing the charts. 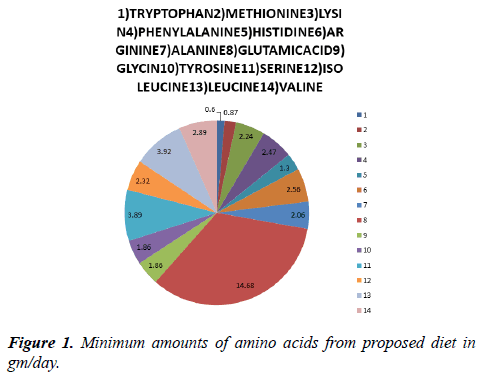 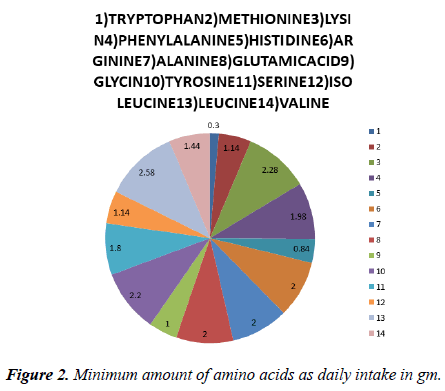 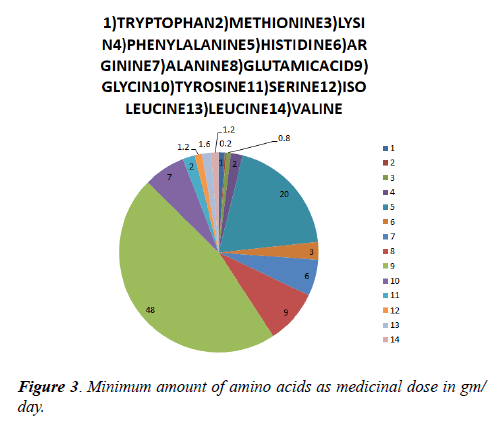 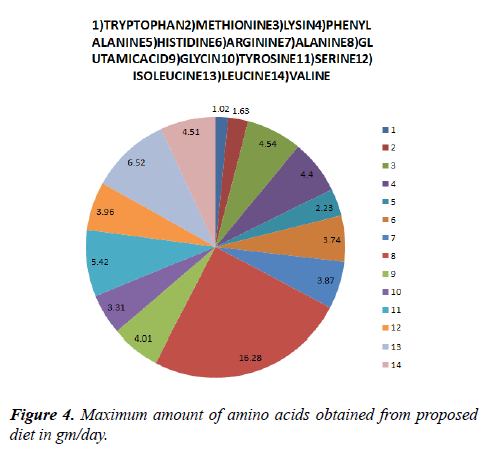 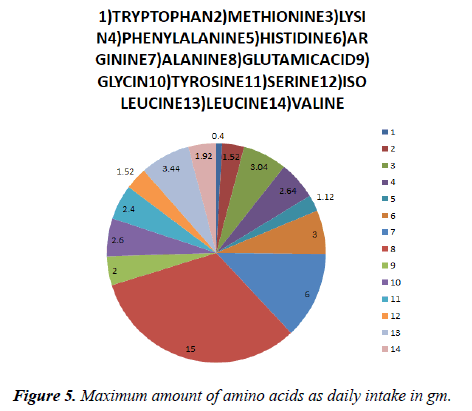 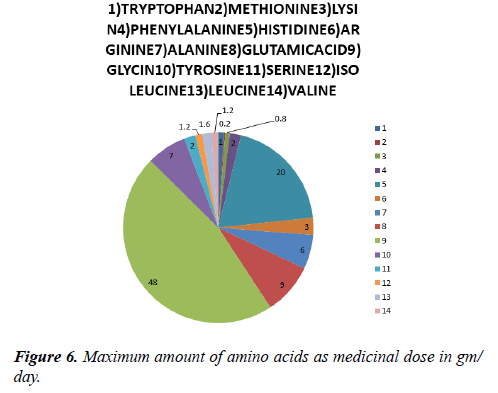 In these charts, Figure 1 represents the minimum amounts of amino acids obtainable daily from the suggested diet, Figure 2 shows the minimum daily intake amount necessary while Figure 3 gives the minimum medicinal doses of the above amino acids for various mental diseases.

After presenting the data for the various amino acids it may now be interesting to discuss in brief the mechanism of the above acids in relation to brain function and applicability of each of them to various mental problems and the medicinal doses thereof. Table 3 below records the results of the investigation for the above.

Table 3. Amino acids, their mechanism for the diseases and medicinal doses.

Mental diseases are matters of serious concern. Scientists are searching for the remedy of the above diseases.

Amino acids in our daily food habits could play important role to that end because by selection of proper food we could supply the daily intake amount of amino acids which could prevent the diseases to attack us. In the investigation it is shown that by a choice of proper vegetarian diet it is possible to avoid so many mental diseases.

However, when somebody is affected with the above diseases food habits alone cannot supply sufficient amino acids necessary for the treatment of the diseases.

In those cases medicines are essential because the medicinal doses for treatment of diseases contain larger amount of amino acids as has been shown in Table 3 of the investigation.

I gratefully acknowledge the help received from Mr. D. Niyogi in this work and preparation of the manuscript.