Introduction: Colorectal Cancer (CRC) is one of the most leading causes of cancer related mortalities and metastasis is the main cause of death in CRC patients. Versican (VCAN) is an Extra Cellular Matrix (ECM) proteoglycan that is involved in tumor progression and cancer metastasis. The overexpression of VCAN has been observed in some cancer.

Objective: In this study we aimed to analyse VCAN gene expression in patients with colorectal cancer to investigate its association with patients clinico-pathological features.

Results: VCAN gene expression level is significantly increased in tumor samples compare to the adjacent normal tissues with 2.6 change in fold and also there is a significant association between VCAN gene over expression in patients with CRC stage IV and lymph node positive.

Conclusion: VCAN gene is correlated with invasion and metastasis of CRC and has a capability as a candidate prognostic marker in patients with colorectal cancer.

A simple definition of cancer biomarker is an objectively measurable and evaluable as an indicator of cancerous processes biological molecules that produced by either the cancerous cells or tumoral tissues in the patient's body [3].

The alteration of Extracellular Matrix (ECM) proteins has been reported in many cancers. Versican (VCAN) as an extracellular matrix protein is a chondroitin sulphate proteoglycan that plays a key role in tumor malignancy and progression [5]. The role of versican as a main component of extracellular matrix is involved in cell adhesion, extracellular matrix assembly, cell migration and cell proliferation [6]. The upregulation of versican has been observed in a wide range of cancer such as breast [7], prostate [8], melanoma [9], pancreatic [10] and other cancers. In addition in a study on CRC by immunohistochemistry on VCAN protein revealed that VCAN was a strong prognostic indicator in stages II and III colon cancer [11]. VCAN gene is located on chromosome 5q that transcribed into four VCAN mRNA variants.

Studies show VCAN overexpression is associated with tumor development, cancer invasion and cell motility, also it is a candidate as a prognostic marker for cancer metastasis [12].

Thus the presented study was aimed to analyse VCAN gene expression in Iranian colorectal cancer patients and highlight its relation with clinico-pathological characteristics of tumor in 72 colorectal cancerous tumors and adjacent normal tissues.

Seventy two colorectal tumor and the adjacent normal tissues from Iranian colorectal cancer patients were collected from Hazrate-Rasoul hospital during 2014-2016 years. After surgery and resection of the tumor, fresh tissues consist of tumor and adjacent normal tissue was collected in separated sterile tubes. The patients had not yet received any chemotherapy treatment. Tissue samples were frozen and stored at -70°C. All patients clinico-pathological information were obtained from pathology department of Hazrate-Rasoul hospital. The tumors staging were determined by pathologist according to TNM staging.

Tissue samples were collected and histological characteristics of the tumors were confirmed by two pathologists. RNA was isolated from 100 mg tissue with using Tripure Isolation Reagent (Roche Applied Sciences, Indianapolis, USA). RNAs quality and optical density were checked by nanodrop (ThermoScientific, USA) and 1% agarose gel electrophoresis. Then RNAs were synchronized according to the optical density and according to the concentration of RNAs first-strand cDNA was synthesized as the manufacturer’s protocol (Thermo scientific kit).

To evaluate VCAN gene expression level we used GAPDH as internal control gene. Real-time RT-PCR was performed by a Rotor gene 6000 (Corbett Research Pty. Ltd., Australia) system with Fast-Start DNA Master SYBR-Green I kit (YTA, Iran). The total volume of the PCR reaction for all samples was 10 μL contained 5 μl SYBR Green PCR master mix, 0.5 μl of each primer (10 μmol/l) and 2 μl template (1000 ng/μl). Samples for no-template were also included in each test to detect any contamination. For calculating the gene expression level Linreg program and Livak method were used [13].

Primers were designed basis of exon–exon junction pattern and specifically for four variants of VCAN mRNA. Primers sequences are shown in Table 1. For confidence accuracy and specificity of real time PCR, the PCR products were checked on 1.5% agarose gel.

The patients and tumor features gathered from the pathology department of Hazrate-Rasoul hospital. The average age of all patients and SD were 56 ± 10 y. Patients were categorized in two groups according to lymph nodes status consist of lymph nodes positive and negative. All colorectal cancer stages (Stages I-IV) were seen among our patients. Also we categorized the patients information into two genders and four kinds of tumor sizes. The information of the patients and tumor features are shown in Table 2.

Table 2. All of 72 Patients and tumor characteristics that used for VCAN gene analysing in this study. 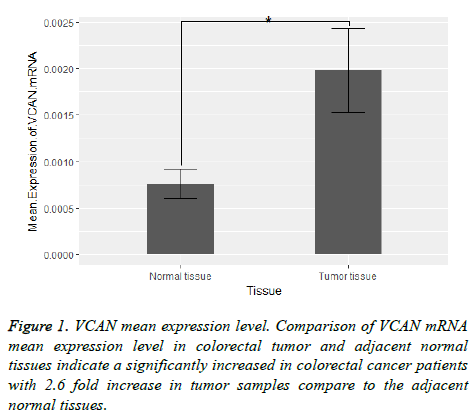 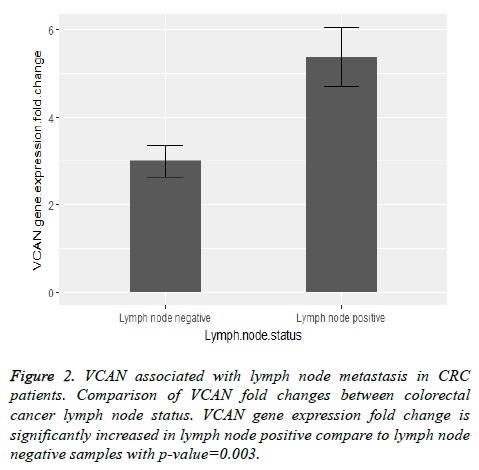 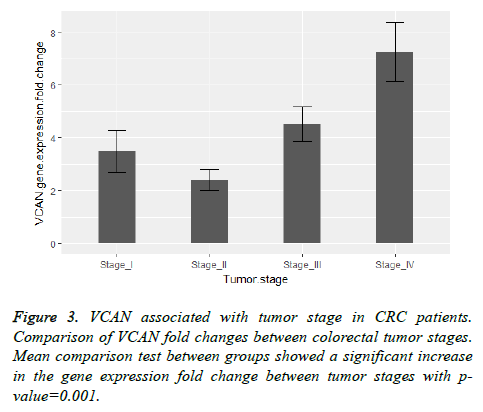 VCAN as a prognostic marker

To highlight the potential of VCAN gene as a prognostic marker for CRC metastasis; ROC curves portray for samples with metastasis to liver (Samples with tumor stage-IV) and lymph node status which depicted in Figures 4 and 5. The Area Under Curve (AUC) were calculated 0.838 and 0.701 respectively. 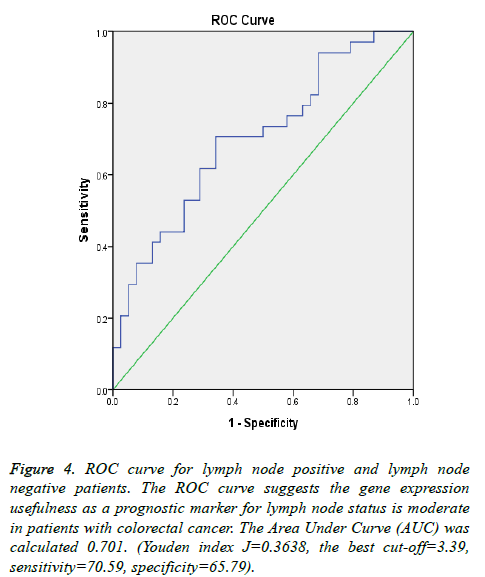 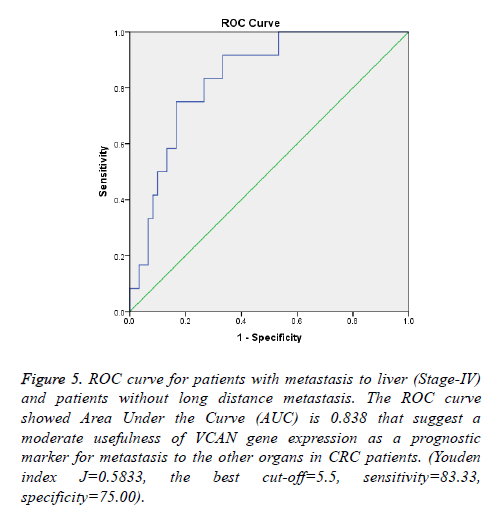 Figure 5: ROC curve for patients with metastasis to liver (Stage-IV) and patients without long distance metastasis. The ROC curve showed Area Under the Curve (AUC) is 0.838 that suggest a moderate usefulness of VCAN gene expression as a prognostic marker for metastasis to the other organs in CRC patients. (Youden index J=0.5833, the best cut-off=5.5, sensitivity=83.33, specificity=75.00).

Extracellular Matrix (ECM) proteins are considered as crucial factors in cancer development. The alteration of ECM protein expression has been reported in many cancers [14].

Versican (VCAN) is a major component of the extracellular matrix. Due to the alternative RNA splicing of VCAN gene, this gene is transcribed into four mRNA variants and each mRNA variant translate to an isoform of versican protein [15].

VCAN is expressed widely in nervous systems and growing cells that indicate a key role of versican in cell proliferation process. There are some studies that suggest VCAN is involved in cancer invasion and metastasis [5,16].

VCAN gene expression is altered in human melanoma [9]. Also versican rich condition will influence on prostate cancer cell adhesion to fibronectin then VCAN expression may has an effect on prostate cancer cell adhesion to the ECM [8]. There is a relation between versican with prostate cancer metastasis [17]. Studies on pancreatic cancer show the greatly increased in versican expression is associated with the malignancy of the tumor [10]. VCAN influences on metastatic phenotype in renal carcinoma [18] and human bladder cancer cell lines [19]. A study on VCAN protein indicates there is an associate between the protein levels with disease recurrence in CRC [11]. Also there is a study on colorectal cancer that Pitule et al. found VCAN gene as one out of 10 genes that is related to CRC metastasis [20].

In the present study we analysed VCAN mRNA expression level in 72 colorectal cancer samples. Our samples consist of colorectal tumors and the adjacent normal tissues. We investigated a significant over expression with 2.6 fold change in VCAN mRNA level in CRC compare to the adjacent normal tissues. The gene expression analyzing and its association with patients clinico-pathological features showed a significant relation between the expression of VCAN with CRC tumor stages and lymph nodes status.

As shown in Figures 2 and 3 the comparison of VCAN fold changes between patients group there is a significant increase in the gene expression in CRC stage-IV and lymph node positive samples. In Figure 5 we depicted ROC curves to elucidate VCAN gene potential as a prognostic marker for metastatic phenotype of CRC. Area under the curve for CRC stage-IV with other three stages of the disease was calculated 0.838 and for lymph node positive with lymph node negative status was calculated 0.701 that suggested moderate usefulness of VCAN as prognostic marker for metastasis in CRC patients.

In our study there was no significant association between VCAN expression in CRC patients and other clinicopathological features including age, gender, histological grade and tumor size.

In conclusion our results indicate the importance of VCAN in invasion and metastasis of colorectal cancer. Also we found the capability of VCAN gene as a candidate prognostic marker in patients with colorectal cancer.

All procedures performed in the study involving human participants were in accordance with the ethical standards of the institutional and national research committee and with the Helsinki declaration and its later amendments or comparable ethical standards.