Vascular Foramina of Scaphoid and its Clinical Implications

The blood supply of carpal bone has been rich field for the workers in the 19th century. The vascular pattern put forward in correlation to gross anatomy, radiographic pat-tern of extraosseous and intraosseous blood vessels, ob-serving the vascular foramina on the bones has been de-scribed. Obletz & Halbstein [1] studied the vascular fo-ramina visible on dried specimens of the human scaphoid and proposed a widely accepted concept of a predomi-nantly distally based blood supply entering through the dorsal ridge. However, this concept has not been entirely supported by the results of more recent studies carried out by various investigators. The dorsal, laterovolar and dis-tal group of feeding vessels enter in respective side of scaphoid bone [2] .The vasculature perforate the dorsal area of the scaphoid bone through numerous small foram-ina along the spiral groove and dorsal ridge [3].

The fracture and fraction dislocation of scaphoid is very common in wrist trauma and avascular necrosis is directly connected with vascular pattern of scaphoid.[4] In two-thirds of all cases, the scaphoid bone is most frequently fractured bone of the wrist, and it is uniformly vascular-ized, so that by fracture both fragments retain their blood supply. In the remaining third of all cases, only one end of the scaphoid is supplied arterially. Thus the poorly vascu-larized fragment frequently becomes necrotic [5]

We decided to study the vascular foramina as a parameter of blood supply of scaphoid and its possible relationship to fracture healing.

The vascularization of scapoid bone was estimated by counting of vascular foramina on dry scaphoid bone of adult age group of both sexes. The dry scaphoid bones were obtained from Department of Anatomy, Moti Lal Nehru Medical College, Allahabad (U.P.), Era Medical College,Lucknow(U.P.) and Chattrapati Shahuji Maharaj Medical University U.P. Lucknow. A total number of 220 scaphoid bones of both sides were selected for study. The non-articular along with articular surfaces of scaphoid bone were considered for observations. The foramina of scaphoid were taken as site of vessel entry. These foram-ina were counted on the surface of bones with the help of operating loop lens.

Dry, 220, scaphoid bones of both sides were taken for observations in present study. The scaphoid bones were not differentiated according to sex. The vascular foramina were found only on palmar and dorsal surfaces of sca-phoid. The articular surfaces were devoid of any vascular entry. According to distribution of foramina, observations were grouped as under:

Table 1: Grouping of Scaphoid according to the number of vascular foramina on dorsal surface. 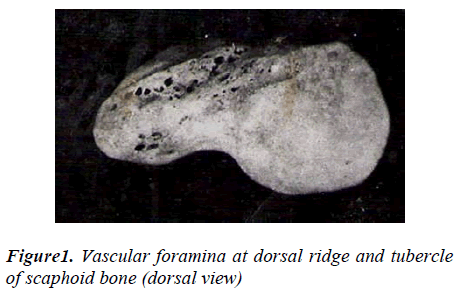 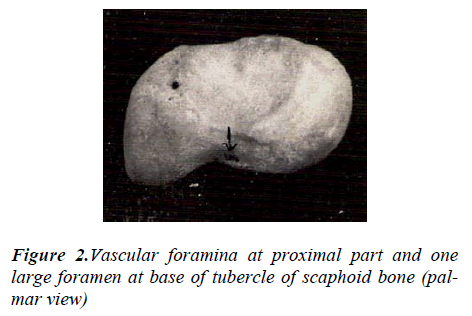 Figure 2: Vascular foramina at proximal part and one large foramen at base of tubercle of scaphoid bone (pal-mar view). 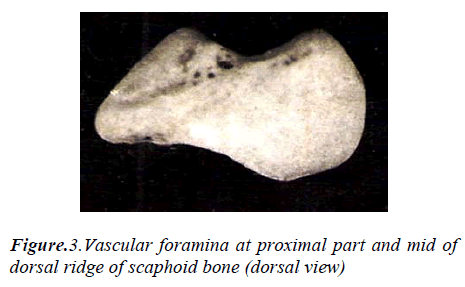 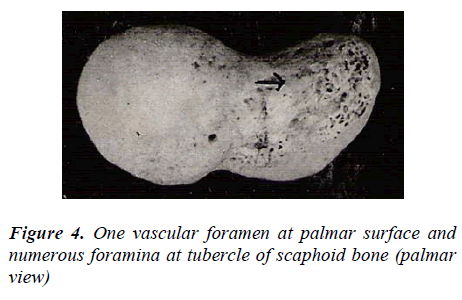 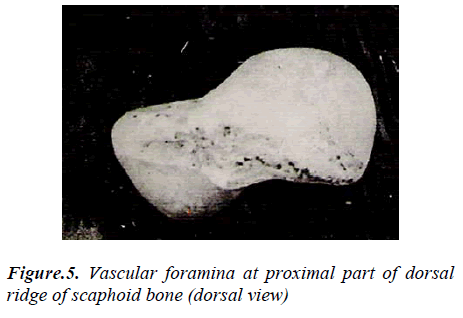 2. The number of vascular foramina on dorsal surface of scaphoid ranged between 4-32 whereas on pal mar surface 1- 8 (Table 4) (Figures 2,4).

Table 4: Number of Vascular Foramina on Dorsal and Palmar Surface.

Table 2: Grouping of Scaphoid according to number of vascular foramina proximal to the mid of waist.

Table 3: Grouping of Scaphoid according to the foramina present distal to mid of waist.

The dorsal surface has four times more foramina than palmar surface .These observations indicate that there is higher blood supply in proximal part of scaphoid in com-parison of other studies. The surgical approach for sca-phoid may be from both dorsal and palmar aspect as vas-cular foramina present in both surface of scaphoid.