Vitamin C is a six-carbon lactone that is synthesized from glucose in the liver of most mammalian species, but not by humans. Vitamin C is an electron donor and therefore a reducing agent. All known physiological and biochemical actions of vitamin C are due to its action as an electron donor and therefore it is good free radical scavenger. In humans, vitamin C acts as an electron donor for eight different enzymes. These vitamin C dependent enzymes required for collagen hydroxylation, synthesis of carnitine, norepinephrine, and peptide hormones and tyrosine metabolism. We have estimated the vitamin C levels in the plasma of the leukemic patients. The overall mean vitamin C levels in the leukemic patients were significantly low (0.25 ± 0.04) as compared to that of the normal control (0.90 ± 0.07). In respect to sex, the mean vitamin C levels in males (0.25 ± 0.04) were found to low than that in females (0.26 ± 0.04) however, we found significant difference only in patients with chronic leukemias. Whereas in respect to age, the mean vitamin C levels were found to elevated with increase in age (in < 10 years value was 0.23 ± 0.03, whereas in age >51 years value was 0.26 ± 0.04) indicating the extent of the free radicals might have stimulated the production of the antioxidant. We observed highly significant (p<0.001) vitamin C levels in all leukemic patients (AML, ALL, CML and CLL) with respect to age. Our results suggest that oxidative stress in leukemic patients causes the deficiency in antioxidant vitamin C, which arise as a result of enormous production of reactive oxygen species in the system.

Vitamin C (ascorbic acid) is a six-carbon lactone that is synthesized from glucose in the liver of most mammalian species, but not by humans, non-human primates and guinea pigs. These species do not have the enzyme gulonolactone oxidase, which is essential for synthesis of the ascorbic acid immediate precursor 2-keto-lgulonolactone. The DNA encoding for gulonolactone oxidase has undergone substantial mutation, resulting in the absence of a functional enzyme [1,2]. Consequently, when humans do not ingest vitamin C in their diets, a deficiency state occurs with a wide spectrum of clinical manifestations. Clinical expression of vitamin C deficiency, scurvy, is a lethal condition unless appropriately treated. Thus, humans must ingest vitamin C to survive. Vitamin C is an electron donor and therefore a reducing agent. All known physiological and biochemical actions of vitamin C are due to its action as an electron donor. It donates two electrons from a double bond between the second and third carbons of the 6-carbon molecule. It is also called an antioxidant because, by donating its electrons, it prevents other compounds from being oxidized. However, by the very nature of this reaction, vitamin C itself is oxidized in the process. It is noteworthy that when vitamin C donates electrons, they are lost sequentially. The species formed after the loss of one electron is a free radical, semidehydroascorbic acid or ascorbyl radical. As compared to other free radicals (a species with an unpaired electron), ascorbyl radical is relatively stable with a half-life of 10-5 seconds and is fairly unreactive. This property explains why ascorbate may be a preferred antioxidant. In simple terms, a reactive and possibly harmful free radical can interact with ascorbate. The reactive free radical is reduced, and the ascorbyl radical formed in its place is less reactive. Reduction of a reactive free radical with formation of a less reactive compound is sometimes called free radical scavenging or quenching. Ascorbate is therefore a good free radical scavenger due to its chemical properties [3,4].

In humans, vitamin C acts as an electron donor for eight different enzymes [5]. At least for some of the enzymes, ascorbate adds electrons sequentially, with formation of the ascorbyl radical intermediate. Of the eight enzymes, three participate in collagen hydroxylation [6–8]. These reactions add hydroxyl groups to the amino acids proline or lysine in the collagen molecule, thereby greatly increasing stability of the collagen molecule triple helix structure. Two other vitamin C dependent enzymes are necessary for synthesis of carnitine [9,10]. Carnitine is essential for the transport of fatty acids into mitochondria for ATP generation. The remaining three vitamin C dependent enzymes have the following functions: one participates in the biosynthesis of norepinephrine from dopamine [11,12], one adds amide groups to peptide hormones, greatly increasing their stability [13,14], and one modulates tyrosine metabolism [15,16]. In this study we measured plasma vitamin C (ascorbic acid) levels in patients with leukemia.

Study cases: The study group includes a total 191 subjects. This includes patients as well as control.

Total 131 patients with confirmed diagnosis of leukemia were selected for this study. The patients in the study were those who referred to Department of Medical Oncology, Shri Siddhivinayak Ganapati Cancer Hospital, Miraj.

Patients were grouped according to type of leukemia as;

The 60 healthy control were taken in all age groups with both genders (compared to leukemia patients) attending the OPD of the Shri Siddhivinayak Ganapati Cancer Hospital and Government Medical College and Hospital, Miraj during the same period.

The patients and healthy controls having history of smoking, alcoholism and other diseases which alters serum vitamin C concentration such as cancers, scurvy etc no such concurrent or past history of diseases were excluded from the study.

Informed consent was obtained from the participants. Blood samples were collected from 131 patients with confirmed diagnosis of leukemia, attending Medical Oncology Department of Shri Siddhivinayak Ganpati Cancer Hospital. In addition blood samples were also obtained from 60 healthy age and sex matched randomly selected individuals from general population to serve as controls. A plasma vitamin C levels were measured by phosphotungstic acid reaction described by Ayekyaw [17] and the levels were expressed as mg/dl

The data were evaluated statistically by using student ‘t’ and ‘F’ test, ‘F’ value was calculated by Minitab and SPSS software.

We investigated the levels of ascorbic acid in plasma of leukemic patients and healthy controls and are given in table 1 and level of it in all patients (AML, ALL, CML and CLL) were found to be significantly decreased (p<0.001) as compared to the control. Lowest decrease is found in ALL patients (Table 1). 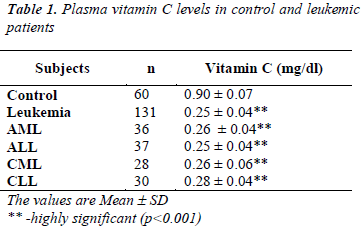 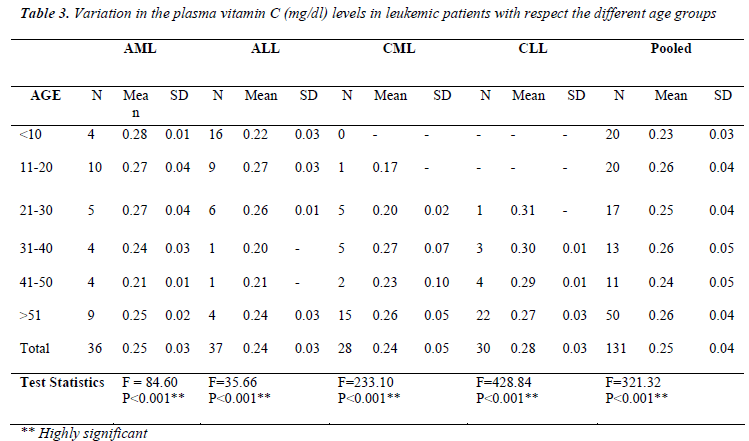 A significant lower level of ascorbic acid was found in plasma from patients with leukemia than normal control this may be due increased utilization (Table 1).

Cancer patients are significantly deficient of vitamin C; it indicates increased requirement and utilization of this substance to potenciate resistance mechanism like secondary anticancer mechanism of Vitamin C. The tendency of leukemic cells to proliferate is restrained by highly viscous intracellular glycosaminoglycans and to overcome the above situation cells releases enzyme hyaluronidase. For the synthesis of hyaluronides, vitamin C is utilized and hence total vitamin C levels may decrease [18].

First line of defence against infection, phagocytosis is also an ascorbic acid dependent process. Phagocytosis is the gobbling up and digestion of invading bacteria in the blood stream and tissues by white blood cells. Under normal conditions, with good supply of ascorbic acid in the blood serum, any injury or bacteria getting into the tissues attracts hordes of white cells to the area; and they immediately go to work swallowing and digesting the bacteria and foreign material [19].

Leukemia is not the neoplastic disease itself, but hemorrhage and infection. This is a statistical fact. Both lack of resistance to infections and hemorrhaging are symptoms of scurvy. Leukemics are suffering from uncorrected hypoascorbemia or severe chronic subclinical scurvy in addition to leukemia; and they require high levels of ascorbic acid amounting to many grams per day to conquer their severe hypoascorbemia [19].

The significant sex difference in vitamin C levels are observed only in CML and CLL patients (table 2). Earlier, it was observed that total antioxidant status (TAS) was lower in females than in males; however, there was significant decrease in TAS levels with age in male but not in female indicating the genetic difference found in management of oxidative status [21]. This might explain the significant sex difference found in vitamin C levels in present study in the case of CML and CLL. Both types of acute leukemias (AML and ALL) have exhibited reduced vitamin C levels, though sex difference was not apparent. This indicates failure of antioxidant mechanism to counteract the extensive oxidative damage resulting in leukemia.

Table 3 shows the variation of vitamin C levels in the leukemic patients with different age groups. In the age group between 0-10 years and 41-50 years there is a sudden increase in the mean vitamin C levels of pooled patients. Whereas in the age 31-40 years there is sudden rise in vitamin C levels. Various studies have reported the process of aging associated with the degree of the antioxidant activity. Casado et al [22] reported the antioxidant enzyme were increased in the diseases of the aged individuals such as cardiovascular diseases, myomas, chronic obstructive pulmonary disease and acute cerebral accident, but the antioxidant enzyme SOD levels were seen to be decreasing with the process of aging. Whereas in another report [23] it has been shown that the excessive production of free radicals in the organism and the imbalance between the concentrations of these and the antioxidant defenses was related to the processes such as aging and the development of several diseases such as cancer. Alexander Michels [24] studied the effect of aging on Vitamin C Status. He observed that vitamin C levels appear to decline in the elderly; this has been observed not only in human plasma, but also in plasma and tissues in rats. Why do vitamin C levels decline with age? The most straightforward answer is that vitamin C uptake declines with age. In other words, our bodies don't have the same capacity to absorb vitamin C, so vitamin C levels in the plasma and tissues become lower. This has been supported by a recent meta-analysis, which showed that the elderly had much lower plasma vitamin C levels than younger adults following a given dose of vitamin C. This suggests that vitamin C absorption in the gut declines with age. Vitamin C absorption is governed by the same process that allows vitamin C to enter cells—membrane transport. The mechanism responsible for vitamin C transport in the gut and all other tissues is a Sodiumdependent Vitamin C Transporter known as SVCT. Two isoforms of this protein, SVCT1 and SVCT2, are known to exist in every mammal, including humans. In particular, nobody knows how expression or activity of this protein changes with age. He found that the decline in agerelated vitamin C levels is due to a loss of vitamin C transport, primarily due to changes in SVCT activity [23].

In our previous study the levels of oxidative stress markers- Malonyldialdehyde (MDA), SOD and catalase in patients with leukemia and we found increased MDA and decreased SOD and catalase levels [24,25]. In this way Vitamin C is utilized by proliferating malignant cells and also neutralizing oxidative stress markers and resulting in decrease levels of it.

Our study suggests that deficiency of Vitamin C in leukemia is due to increased utilization causing hypovitaminosis.