This study was approved by the Ethics Committee of Kitasato University School of Medicine (number B10-93). All patients and healthy controls were approached based on approved ethical guidelines, they agreed to participate in the study, and could refuse entry and discontinue participation at any time. All participants provided written consent.

Thirty-three 10% formalin-fixed and paraffin-embedded skin biopsy specimens of psoriasis (32 psoriasis vulgaris and 10 psoriatic arthritis) were prepared in this study. The controls consisted of eight each of human epidermal cyst and normal human epidermis.

We prepared four-μm-thick tissue sections made from 10% formalin-fixed and paraffin-embedded psoriasis tissues and normal human skin in this study. Deparaffinized and rehydrated sections were treated with methanol with 0.3% hydrogen peroxidase for 15 min. After washing with 100 mM phosphate buffered saline (pH 7.4; PBS) for 5 min. The sections were incubated with VCP monoclonal antibody (1:500; Thermo Fisher, IL, USA) for 60 min at room temperature (RT). Then, VCP was incubated with ChemMate ENVISION reagent (Dako) for 30 min at RT. Finally, the sections were visualized with Stable DAB solution and counterstained with Mayer’s hematoxylin (Wako Pure Chemical, Osaka, Japan). The stainability was scored as 0=negative; 1=positive cells were scattered; 2=almost all cells were positive in the epidermis.

VCP expression was observed in the cytoplasm of the upper stratum spinosum and basal layer in the epidermis of 38 of 42 of psoriatic skin samples, including psoriasis vulgaris and psoriatic arthritis (Figures 1A and 1B), but was negative in 16 controls except four (Figure 1C). Even when positive, the expression levels were stronger in the psoriatic epidermis than in controls (P<0.01). No significant differences between the expression levels or localization of these proteins and clinicopathological features such as sex, age, psoriasis vulgaris vs. psoriatic arthritis, PASI score, BSA, DAS28, BASDAI, swollen or tender joint counts, and involved joint counts. 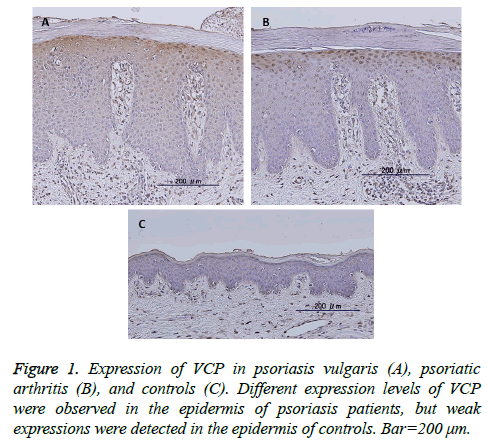 VCP is also called transitional endoplasmic reticulum (ER) ATPase and is known to be involved in a large number of independent cellular processes, which especially govern critical steps in ubiquitin-dependent protein quality control [11]. VCP plays a key role in ER-associated degradation, as reviewed in detail elsewhere [12]. Importantly, the degradation of both ER luminal and membrane proteins requires VCP, whose function in extracting substrates from the ER is essential for their delivery to the proteasome. Consequently, VCP inactivation elicits the unfolded protein response [13], which can trigger an ER-stress-induced apoptosis. The unfolded protein response is also activated during epidermal keratinocyte differentiation in psoriasis [14].

Beg et al. reported that nuclear factor kappa B (NFκB) was a transcription factor that, upon stimulation, translocates into the nucleus and triggers the expression of genes that promote cell proliferation and protect cells against apoptosis [15]. VCP has been proposed to be critically involved in the dissociation and proteasomal degradation of the inhibitor of NFκB IκBα [16]. Therefore, the up-regulation of VCP may result in the downregulation of IκBα and, consequently, in a hyperactive NFκB signaling pathway promoting cell proliferation [17]. On the other hand, abnormal VCP levels led to increased serum interleukin-6 (IL-6), tumor necrosis factor alpha (TNFα), and epidermal growth factor (EGF) levels and VCP caused cytokine imbalance and inflammation in organs [18]. Psoriasis is a chronic inflammatory skin disease, and so NF-kB, TNFα, and IL-6 play crucial role in the pathogenesis of psoriasis [19]. VCP may be associated with the pathogenesis of psoriasis because it causes abnormal keratinocyte differentiation and cytokine imbalance and leads to skin inflammation toward psoriasis. Our previous study showed that the serum IgG level of anti-VCP autoantibody was 5.4-times higher in patients with psoriasis vulgaris than those in healthy controls by twodimensional immunoblotting.

The authors received no specific funding for this work and declare no conflict of interest.