Gastric cancer was the one of the most common type of cancers, it could cause about 800,000 patients die every year. In general, the patients with advanced gastric cancer had a 5 y survival rate equal to 15% [1]. The clinical outcome of gastric cancer had gradually improved nowadays, but the prognosis is still unsatisfied. This is because the mechanism of the gastric cancer development was still poorly understood despite of a few oncogenes and tumor suppressor genes have been reported in gastric cancers [2,3]. Therefore further research of effective treatments for gastric cancer is required.

MicroRNAs (miRs) were a series of non-coding RNAs, which could suppress the transcription of mRNAs by partial complementary binding to 3' Untranslated Regions (UTRs), they were formed by about 21-24 nucleotides [4,5]. Recently studies showed that miR deregulations could regulate the cell proliferation and apoptosis [6,7]. Studies also reported that 43 miRs were up-regulated and 37 miRs were down-regulated in gastric cancer [8], which indicating the dysregulations of miRs were associated with the progression and prognosis of gastric cancer. A few studies indicated that miR-375 expression was down-regulated in many human cancers [9-11]; however the biological role of miR-375 in gastric cancer is still not be understood. In the present study we try to investigate the expression and mechanisms of miR-375 in gastric cancer, which could benefit to the treatment of gastric cancer.

MiR-375 mimic, control mimic transfected SGC-7901 cells and mock cells were cultured in 96-well plate (3500 cell/well); the MTT assay was performed to test the cell viability every 24 h. First MTT reagent was added in to the well at 1:10, and then incubated the cells for additional 4 h. The culture medium was removed and 50 μL DMSO was added. Absorbance was measured at 570 nm, with 655 nm as the reference wavelength. The absorbance was expressed as the cell viability.

MiR-375 mimic or control mimic transfected SGC-7901 cells were seeded into 6-well plates and cultured for 48 h. Then harvested the cells and stained the cells with Annexin V and Propidium Iodide (PI). Cell apoptosis was evaluated by using a flow cytometry equipped with CellQuest software (BD Biosciences).

Total RNA was extracted from SGC-7901 cells and reverse transcribed into cDNA with the Reverse Transcriptase MMLV (Takara). qRT-PCR reactions were performed using the following parameters: 95°C for 10 min, followed by 40 cycles of 15 s at 95°C, and 30 s at 60°C. The primers used were showed as followed. AEG-1: 5’- GTGGTTCAACAGTATTGCGTTGTC-3’, 5’- AACATACTGCCATGTTCCTGAAAC-3’. GAPDH: 5’- GACTCATGACCACAGTCCATGC-3’, 5’- AGAGGCAGGGATGATGTTCTG-3’. GAPDH was used as the control.

The statistical analysis was performed by using SPSS11.0 software. Data were showed as mean ± SD. Each experiment was performed in 3 independent studies. *P<0.05 indicated statistically significant. 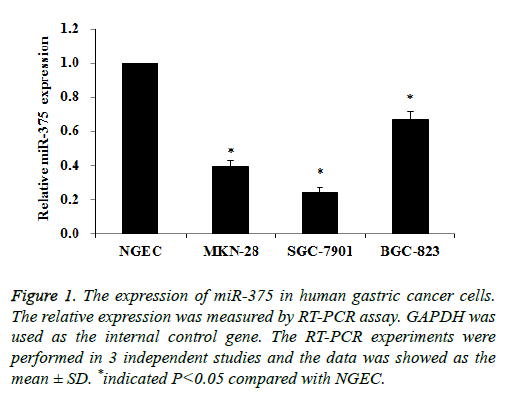 Figure 1: The expression of miR-375 in human gastric cancer cells. The relative expression was measured by RT-PCR assay. GAPDH was used as the internal control gene. The RT-PCR experiments were performed in 3 independent studies and the data was showed as the mean ± SD. *indicated P<0.05 compared with NGEC. 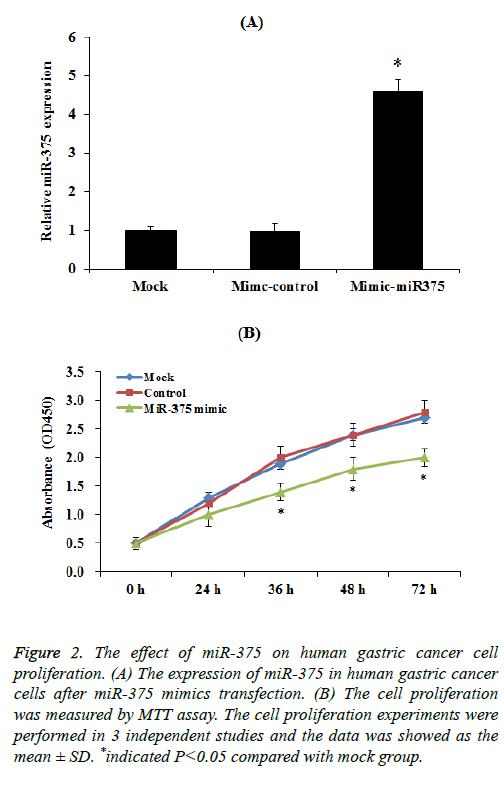 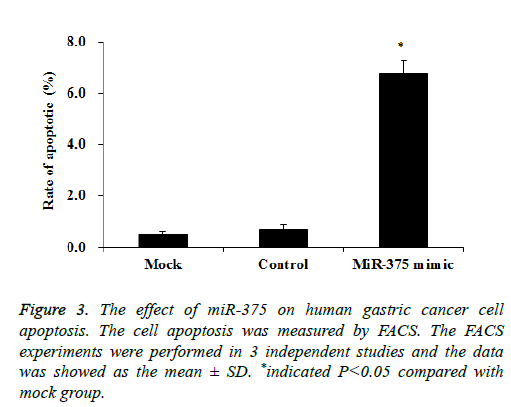 Figure 3: The effect of miR-375 on human gastric cancer cell apoptosis. The cell apoptosis was measured by FACS. The FACS experiments were performed in 3 independent studies and the data was showed as the mean ± SD. *indicated P<0.05 compared with mock group.

Previous study indicated that AEG-1 is a directed target of miR-375 [13], as a relatively novel gene, AEG-1 has emerged as an important oncogene in multiple aspects of cancer development and progression [14], in our study we try to find whether miR-375 regulate gastric cancer cell proliferation and apoptosis through targeting AEG-1 gene. To confirm our hypothesis Western Blot and RT-PCR assay were performed. Our RT-PCR results demonstrated that when up-regulation of miR-375, the AEG-1 mRNA level was significantly decreased (Figure 4) and the similar AEG-1 expression change also observed in protein level with Western Blot assay (Figure 5). Therefor miR-375 regulates the gastric cancer cell proliferation and apoptosis through the regulation of AEG-1 gene. 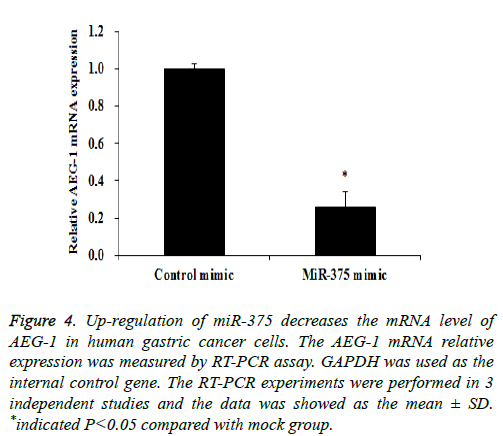 Figure 4: Up-regulation of miR-375 decreases the mRNA level of AEG-1 in human gastric cancer cells. The AEG-1 mRNA relative expression was measured by RT-PCR assay. GAPDH was used as the internal control gene. The RT-PCR experiments were performed in 3 independent studies and the data was showed as the mean ± SD. *indicated P<0.05 compared with mock group. 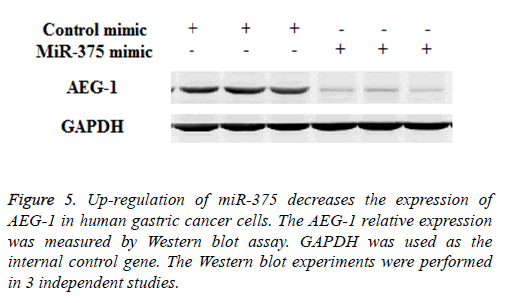 Figure 5: Up-regulation of miR-375 decreases the expression of AEG-1 in human gastric cancer cells. The AEG-1 relative expression was measured by Western blot assay. GAPDH was used as the internal control gene. The Western blot experiments were performed in 3 independent studies.

Previous study indicated that miR-375 was first identified as an islet specific miRNA; it could regulate the insulin level [19], studies also demonstrated that the expression was downregulated in many type of cancers [9-11]. Study indicated that AEG-1 was an important oncogene in the development of cancer [14]; and AEG-1 was over-expressed in melanoma, glioma, neuroblastoma, and carcinomas of breast, prostate, esophagus, stomach and liver [20-27]. Previous study also found that AEG-1 was a directed target of miR-375 [13]; andd the relationship of the regulation of AEG-1 and miR-375 in gastric cancer has not yet been fully clarified. In the present study we found that the expression of miR-375 in gastric cancer cells was decreased compared to the normal gastric cells, induction of the miR-375 expression by mimic transfection could inhibit the gastric cancer cell proliferation and induce the gastric cancer cell apoptosis. Further study demonstrated miR-375 regulated the gastric cancer cell biological function through the regulation of AEG-1 gene.