Objective: This study is to determine the efficacy of the Chinese clinical program of Ultrasound Guided High-Intensity Focused Ultrasound (USgHIFU) in the Bulgarian patients with advanced pancreatic adenocarcinoma.

High-Intensity Focused Ultrasound (HIFU) has been used for treatment of solid tumors (regardless of benign and malignant) in Asia and Europe [11-13]. Studies have shown that the Ultrasound guided HIFU (USgHIFU) method achieved better therapeutic effects on Asian patients with advanced pancreatic cancer [14-24]; however, its application in European patients has not been well investigated [25]. In addition to pancreatic adenocarcinoma [26,27], USgHIFU is also suitable for the treatment of pancreatic neuroendocrine tumor [28,29], pancreatic cystadenocarcinoma [30], acinic cell carcinoma [30], and pancreatic metastatic cancer [28]. According to the clinical guideline of USgHIFU treatment [31], we designed this study and investigated whether this USgHIFU treatment also benefits Bulgarian patients with advanced pancreatic adenocarcinoma.

This study was approved by the Ethics Committee of the Second Affiliated Hospital of Chongqing Medical University and the Medical University Pleven. The informed consents were obtained from patients and their family before procedures. The inclusion criteria included: i) patients with pathologically diagnosed pancreatic adenocarcinoma; ii) TNM stage III/IV; iii) Karnofsky score above 70%; iv) expected survival time more than three months. The exclusion criteria included: i) patients with un-controlled cardio-pulmonary diseases, ii) patients with active hemorrhagic diseases, including upper gastric-intestinal bleeding, iii) patients with Child-Pugh Grade C liver disease; iv) patients with continuous and increasing jaundice, and v) patients with large scar in the acoustic pathway of HIFU on the abdominal wall. From January 2013 to January 2015, 49 advanced pancreatic adenocarcinoma patients (including local and tumor metastasis) without surgical options were enrolled in this study. These 49 patients included 27 Chinese patients and 22 Bulgarian patients. Their clinical characteristics were shown in Table 1. There was no significant difference in clinical characteristics between Chinese patients and Bulgarian patients.

Table 1. The clinical characteristics of patients with advanced pancreatic cancer in two groups.

The JC USgHIFU system (Chongqing Haifu Medical Technology Co. Ltd., Chongqing, China) was applied on Chinese and Bulgarian patients. The therapeutic procedure was guided by a real-time B-mode ultrasound. A DU3 US imaging device with 2.5-3.5 MHz imaging probe (Esaote, Genova, Italy) was used as the real-time imaging unit of the system. Therapeutic ultrasound energy was produced by a transducer with diameter about 150 mm diameter, focal length about 135 mm, and work frequency about 0.85 MHz.

Bowel preparation was performed one day before USgHIFU, and a routine fasting and water-deprivation should be finished 10 h before USgHIFU. Patients lay down on the table of JC USgHIFU system after anesthesia. A tank containing degassed water was used to fulfil the space between the body and the transducer in order to create an acoustic pathway without air bubbles. Besides, in order to get rid of gas left in the bowels (potentially in the acoustic pathway), a water balloon was placed between the abdominal wall and the transducer.

The parameters of USgHIFU including treatment time, USgHIFU time, average power and total energy were separately recorded. The treatment time was the time duration started from the first therapeutic ultrasound exposure to the last one. The USgHIFU time was the sum of all therapeutic ultrasound exposure time. The average power and total energy were recorded and calculated by JC USgHIFU system.

Vital signs of patients were closely monitored for at least 6 hours after USgHIFU treatment. All patients were encouraged to do activity and suggested no meal before passing air again. The clinical assessment was performed after USgHIFU operation, and the complication was recorded one week post- USgHIFU by referring to CTCAE3.0 grade [33]. The pain score was evaluated by VAS pre-and post-USgHIFU. The concentration of amylase and CA19-9 in serum of patients was also tested. One month after USgHIFU, radiography (enhanced CT/MRI) was performed to measure the lesion size. Additionally, a follow-up was performed every three months to study the survival condition of patients. The follow-up lasted for 24 months from January 2013 to January 2015.

Data was analysed using SPSS version 19.0 for Windows (SPSS Inc., Chicago, US). Continuous variables were shown as Mean ± SD, and analysed by independence t-test. The level of serum CA19-9 and VAS pain score before and after USgHIFU treatment were comparatively analysed by paired t-test. Statistical analysis of categorical values was performed by Chisquare test. The duration of a patient’s survival was calculated from the date of USgHIFU treatment to the date of death. The cumulative survival rate was estimated by Kaplan-Meier method and compared by Log-Rank test. It was considered as statistical significance if P<0.05.

Comparison of USgHIFU parameters between Chinese and Bulgarian patients

Table 2. The parameters of USgHIFU treatment for patients with advanced pancreatic cancer in two groups.

Comparison of VAS pain score between Chinese and Bulgarian patients

Table 3. Evaluation of the VAS pain scores for patients with advanced pancreatic cancer in two groups before and after HIFU treatment.

Comparison of complications and outcome between Chinese and Bulgarian patients

To evaluate the complications after USg HIFU treatment, follow-up was conducted. During follow-up, four patients with complications were reported one-month post-USgHIFU (Table 4). Two patients had pancreatitis (Grade 1). There was no symptom, but only with higher level of serum amylase, which reduced to normal level in one week without any medical intervention. The other two patients suffered skin burn (Grade 2), and the burn wound healed after debridement in one week. No serious complication was found, and all patients suffering complications recovered in one week. The complication ratio in Chinese patients was 1:27 while in Bulgarian patients was 3:22. No statistical significance was found between the two groups (P>0.05).

Table 4. Number and CTCAE3.0 grade of complications and outcome.

Comparison of tumor size between Chinese and Bulgarian patients 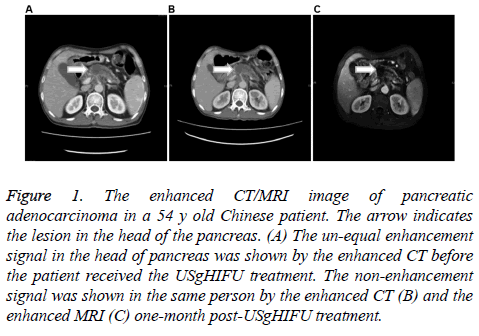 Table 5. The modification of tumor size in patients with advanced pancreatic cancer after USgHIFU treatment in two groups.

Comparison of CA19-9 level between Chinese and Bulgarian patients

Comparison of survival time between Chinese and Bulgarian patients 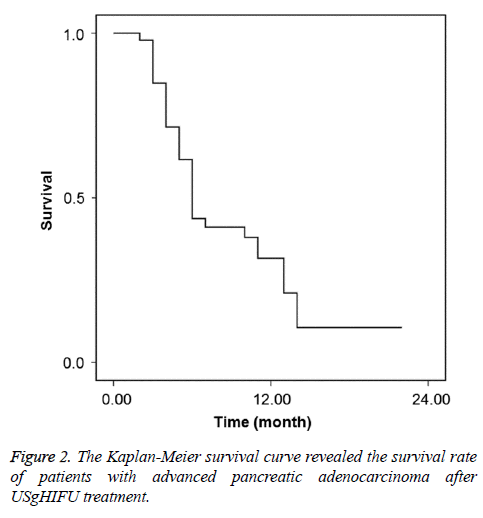 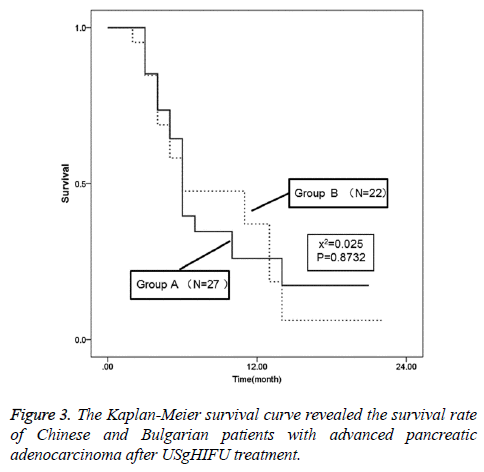 Declaration of Conflicts of Interest