Renal Cell Carcinoma (RCC) is originated from urinary tubular epithelium and RCC represents 80-90% in human malignant tumors [1,2]. Among urologic neoplasm, the incidence of RCC is the third highest and growing at percent of 6.5 average year perannumpa, and the majority of RCC patients eventually develop metastatic RCC [3,4]. Pathological classification of treatment and prognosis of kidney cancer has important guiding significance for patients with RCC [5,6]. The performance of the RCC is various and mainly presents hematuria, flank pain and swelling for clinical patients [7,8]. RCC is highly aggressive and generally resistant to chemotherapy, radiotherapy, and hormone therapy compared to that many other malignancies [9,10]. Therefore, new therapeutic alternatives and elaboration of molecular mechanism are needed in order to provide more effective treatments of malignancy of RCC.

Tunicamycin is nucleotide antibiotic produced by Streptomyces lysosuperficus. A large numbers of reports have suggested that Tunicamycin can be widely suppressed human cancer cells growth and metastasis [11,12]. Evidences have showed that inhibition of N-linked glycosylation by tunicamycin induces Ecadherin- mediated cell-cell adhesion and inhibits cell proliferation in undifferentiated human colon cancer cells [13]. Huong et al. have showed that proteasome inhibitor-I can enhance tunicamycin-induced chemosensitization of prostate cancer cells through up-regulation of NF-kappaB and CHOP expression [14]. Further, tunicamycin sensitizes human melanoma cells to tumor necrosis factor-related apoptosisinducing ligand-induced apoptosis by up-regulation of TRAILR2 via the unfolded protein response [15]. However, no reports have investigated the therapeutic role of Tunicamycin on RCC in mouse model.

In this study, we analysed the inhibitory effects of Tunicamycin on RCC cells in RCC cells and RCC mouse model. We investigated the potential signal mechanism mediated by Tunicamycin in breast cancer cells. We also identified apoptosis rate of CRC cells were induced by Tunicamycin. Results presented that Tunicamycin may be an efficient anticancer agent for the treatment of RCC via regulation of ERK/AKT signaling pathway.

This study was performed by the recommendations in the Guide for the Care and Use of Laboratory Animals of Sichuan University. All animals’ protocols were experimented in accordance with National Institutes of Health and approved by Committee on the Ethics of Animal Experiments Defence Research.

ACHN and RuCa cells were transfected by pvector or pAKT and culture in 96-well plates for 48 h. Growing ACHN and RuCa cells were treated by 10 mg/ml Tunicamycin for 48 h. After incubation, 20 μl of MTT (10 mg/ml) in PBS solution was added to each well, the plate was further incubated for 4 h. Most of the medium was removed and 100 μl of DMSO was added into the wells to solubilize the crystals. The OD was measured by a BIO-RAD (ELISA) reader at wavelength of 450 nm.

Total mRNA was isolated from ACHN and RuCa cells by using RNA Easy Mini Extract Kit (Sigma-Aldrich, Gaithersburg, USA). Expressions of Bcl-2, P53, Caspase-3 and Bad in ACHN and RuCa cells were calculated by using RTqPCR kit with β-actin expression as an endogenous control. All procedures were performed according to the manufacturer’s instructions. All the primers were synthesized by Invitrogen (Invitrogen, Shanghai, China). Relative mRNA expression levels were determined by 2-ΔΔCt. The final results were presented as the n-fold manner compared to β-actin.

To analyse the effects of Tunicamycin (10 mg/ml) on the cell cycle stage of ACHN and RuCa cells, flow cytometry was performed. Exponentially, culturing ACHN and RuCa cells or ERK-overexpressed ACHN and RuCa cells were treated with Tunicamycin (10 mg/ml) for 48 h. Cells were washed and trypsinized and rinsed with Phosphate-Buffered Saline (PBS). All cells were fixed in 75% ice-cold ethanol for 5 minutes and then washed with PBS three times. The fixed cells were washed with RNase A (20 μg ml/l, Fermentas) and stained propidium iodide (20 μg ml/l, Sigma-Aldrich) for 10 min at 37°C. The percentages of cells in G0/G1 and S phase were analysed using BD FACS Calibur (Becton Dickinson, NJ, USA).

Male Balb/c (8 weeks old, body weight: 30-35 g) mice were purchased from Slack co., LTD (Shanghai, China). Mice were maintained at a 12 h light/dark cycle with free access to diet and water. Experimental mice were implanted ACHN cells (5 × 107) into groin and were divided into two groups (n=50 in each group). Treatments were initiated on day 5 after tumor implantation (diameter: 5-8 mm). Tumor-bearing mice were intravenously injected Tunicamycin (10 mg/kg) as PBS as control. The treatment was continued 10 times once time a day. The tumor volumes were calculated according to previous study [16].

For analysis the apoptosis of myocardial cells, the terminal deoxynucleotidyl transferase (TdT)-mediated dUTP nick end labeling (TUNEL) assay (Biotool) were used to detect TUNEL-positive cells. Tumor cells from experimental mice after treated by Tunicamycin or PBS were fixed with 4% paraformaldehyde solution for 60 minutes at 4°C. Subsequently, cells were incubated with equilibration buffer for 30 minutes at 4°C. The tumor sections were then incubated with 50 μl of the reaction mixture at 37°C for 60 minutes and washed 3 times with PBS. The cells nuclei were stained with 4', 6-Diamidino-2-Phenylindole (DAPI) for 60 minutes at 4°C. Finally, tumor tissues images were captured with a ZEISS LSM 510 confocal microscope at 488 nm.

Tumors from xenografted mice were fixed by using formaldehyde (10%) followed with embed in paraffin. Immunohistochemical staining was performed by an avidinbiotin- peroxidase technique. Paraffin-embedded tissue sections were prepared and epitope retrieval was performed for further analysis. The paraffin sections were subjected with hydrogen peroxide (3%) for 10~15 minutes, which subsequently were blocked by a regular blocking solution for 10~15 minutes 37°C. Finally, the sections were incubated with biotinylated goat anti-human ERK (1: 500, ab17942, Abcam) and AKT (1: 500, ab64148, Abcam), respectively, at 4°C for 12 h. Samples were washed with PBS three times and relative expression of proteins was analysed by chemi-luminescence detection system (Amersham Biosciences, Piscataway, NJ).

Results are calculated as mean ± SEM. Significance was established with the SPSS statistical (SPSS, USA) and GraphPad Prism 5 software (GraphPad Software, USA), Pearson's correlation coefficient or a two-tailed Student's t-test. The data are presented as the mean and SEM of three independent experiments. Differences were considered significant at *P<0.05, **P<0.01. 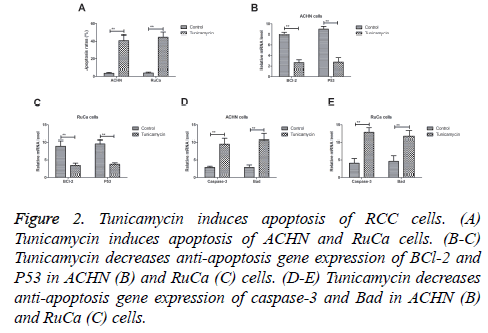 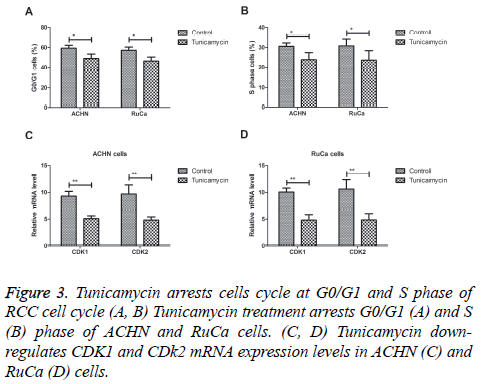 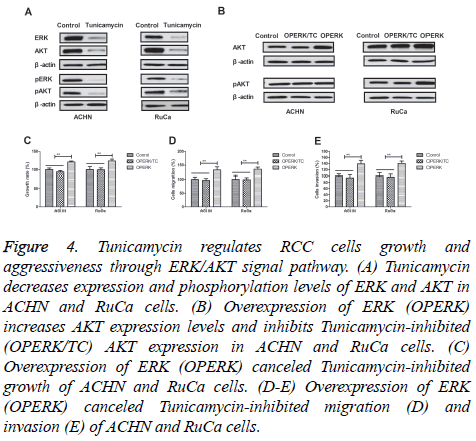 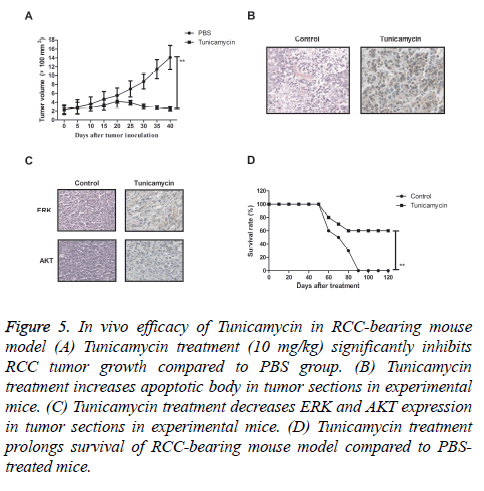 The global incidence of RCC is increasing annually and the causes are multifactorial [17]. Though multiple new targets have been identified, and therapeutic agents are in varying stages of development, the targeted therapy remains a promising treatment modality in human cancer [18,19]. Hopefully, the approval of newer agents will translate into more accessible and efficacious options for patients and oncologists. Currently, previous study has reported the efficacy of Tunicamycin for the treatment of human cancer [11,20]. Research also has showed that Tunicamycin presents antitumor efficacy by killing tumor cells growth and enhancing apoptosis of tumor cells [21,22]. Findings have showed that Tunicamycin significantly inhibited growth and aggressiveness of RCC cells. We have found that Tunicamycin treatment induced apoptosis and arrested cell cycle of ACHN and RuCa cells, which contributed to long-term survival rate of RCCbearing mouse model after treatment with Tunicamycin.

Ferraro et al. have indicated that EZH2 is regulated by ERK/AKT and targets integrin alpha2 gene to control epithelial-mesenchymal transition and anoikis in colon cancer cells [23]. Unfolded protein response is required in nu/nu mice microvasculature for treating breast tumor with Tunicamycin, which strongly supported tunicamycin's potential for a powerful glycotherapeutic treatment of breast cancer in the clinic [24]. In this study, we reported the efficacy of Tunicamycin for the treatment of RCC. Findings have indicated that Tunicamycin induced apoptosis of RCC cells via increasing pro-apoptosis gene expression. In addition, blockage of ERK/Akt signaling pathway promoted human breast cancer cells apoptosis and death through reactive oxygen speciesdependent down-regulation [25]. Furthermore, inhibition of prostate cancer proliferation is paralleled by Erk/Akt inactivation and reduced Bcl-2 and bad phosphorylation [26]. Our results showed that Tunicamycin treatment decreased Bcl-2 and bad expression, which led to inhibition of growth of RCC cells through promoting apoptosis.

In conclusion, observed activity warrants further evaluation of the therapeutic effects of Tunicamycin in RCC cells and mouse model. Our present study demonstrates that up-regulation of expression of apoptosis contributes to inhibition of RCC growth, down-regulation of the ERK/AKT signaling pathways, as well as inhibition of migration and invasion, arresting cell cycle in RCC cell.