Tuberculosis in children in a hospital in the Suburbs of Dakar, Senegal

Introduction: Tuberculosis remains a major public health problem in Senegal despite all the means used to deal with this disease. In an attempt to strengthen tuberculosis control in children, it was envisaged to undertake this study, the main objective of which was to describe the epidemiological, clinical and evolutionary profile of tuberculosis cases, all types taken together, in children monitored at the Centre hospitalier Roi Baudouin de Guédiawaye. Materials and methods: A descriptive retrospective study was carried out from 1 January 2010 to 31 December 2014 in the Centre hospitalier Roi Baudouin de Guédiawaye located in the Dakar suburbs. Tuberculosis cases diagnosed in children during the reporting period were compiled from patient records specially designed for this purpose. The data was entered on Excel and the analysis was done using Stata IC 12 software. Results: A total of 121 new cases of tuberculosis were reported in children during the study period. The average age of the children was 10.84 years. The study population was predominantly female (52.89%). Pulmonary location was more frequent with 70.25% of cases. Extra pulmonary locations were mainly represented by lymph node (30.55%), osteoarticular (16.67%) and pleural (13.89%) forms. The bacilloscopy was positive in 47.93% of the cases. Tuberculosis was associated with HIV in 14.05% of cases. The evolution was favourable in the majority of cases and the hospital mortality was 4.96%. Conclusion: Given that childhood tuberculosis is still common and mortality high, there is need for further studies to identify the factors contributing to the fact that this epidemiological situation remains unchanged.

Tuberculosis is a major global public health problem. Its prevalence increases with HIV infection. According to the WHO, in 2015, 10.4 million of tuberculosis cases were noted with about 1.8 million deaths. More than 95% of deaths occur in low- and middle-income countries [1]. An estimated one million children with tuberculosis and 170,000 deaths are found in HIV-negative children [1].

Putting an end to the TB epidemic by 2030 is one of the health targets set out in the recently adopted sustainable development goals of the United Nations. In Senegal, while major advances have been made in screening for and successfully treating the disease, it must be recognized that tuberculosis management in children is still inadequate. Indeed for the year 2012, infant forms accounted for only 5.2% of the cases instead of the 11% expected [2].

In an attempt to strengthen tuberculosis control in children, it is necessary to re-evaluate tuberculosis epidemiology in children. It is in this context that this study was conducted with the main objective to evaluate the epidemiological, clinical and evolutionary aspects of tuberculosis in children seen at the Centre hospitalier Roi Baudouin de Guédiawaye.

A descriptive retrospective study was conducted from 1 January 2010 to 31 December 2014 at the Centre hospitalier Roi Baudouin de Guédiawaye. This health facility is located in Guédiawaye, which is one of the four departments in the Dakar region. It is located 17 km from the city centre of the capital city in a peri-urban area located in the Niayes with a sub-Sahelian climate.

The Centre hospitalier Roi Baudouin is a level 1 public health institution with outpatient services, medical and surgical hospitalization and diagnostic assistance (medical imaging and laboratory). It also has a tuberculosis treatment centre headed by a state nurse in charge of providing tuberculosis treatment in accordance with the protocol of the National Tuberculosis Control Programme. Treatment is administered daily under direct supervision in children and adults. It consists of two phases: an intensive phase followed by a continuation phase. The treatment schedule will depend on the category, age and location.

All children aged 0-15 years received in this Centre for tuberculosis, all types taken together, were included. Sociodemographic (age and sex), clinical (type and location of tuberculosis), biological (search for BAAR) and evolutionary information (cured, lost to follow-up, transferred or deceased) were collected. Age was defined in three categories: under-5 age group; category between 5 to 10 years and category of over 10 years. The data was entered on Excel and the analysis was performed using STATA IC 12 software. Quantitative variables were described in terms of mean and standard deviation. Qualitative variables were described in terms of numbers and percentages of data. The tests significance threshold was set at 5%.

Distribution of Tuberculosis Cases by Year 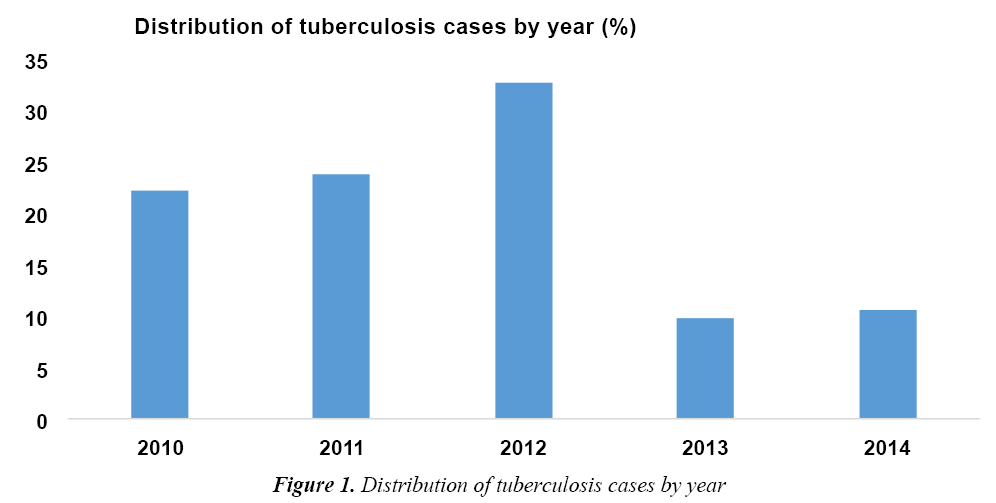 In 22.22% of cases, the location of the extra pulmonary form was not specified. A positive bacilloscopy was found in 47.93% of cases. Co-infection with HIV was found in 14.05% of cases.

Of the extra pulmonary forms, lymph node, osteo-articular and pleural locations were more frequent with 30.55%, 16.67% and 13.89%, respectively. Cutaneous forms accounted for 5.56%.

Miliary, meningeal, peritoneal and multifocal tuberculosis accounted each for 2.78%. In 22.22% of extra pulmonary location cases, the form was not specified (Table 3).

The cure rate was higher in children over 10 years of age (97.70%). On the other hand, it was almost similar in children under 5 years and in those aged between 5 and 10 years.

Table 4: Clinical, biological and evolutionary profile of patients by age

The goal of our study was to study the epidemiological, clinical and evolutionary aspects of tuberculosis in children. Thus, an infant proportion of 14.3% with an age that varied between 3 months and 15 years was noted. The average age was 10.84 years. This average higher than that found in Dakar by Ba et al. [3] (5 years) and Hailu et al. [4] in Lomé (8.5 years) is identical with those found in other studies in Kenya (9 years) [5] and Algeria (9.7 years) [6].

The bacilloscopy was positive in 47.93% of the cases in our series. Similarly, Ba et al. [3] and Zemour et al. [6] found similar results in Senegal and Algeria with 41% and 53%, respectively. Sputum smears were positive only in 10-15% of cases and culture confirmation only in 30% to 40% [8,9]. Furthermore, the bacilloscopy in our series returned positive in 60.91% in children over 10 years (p<10-3). In France, cases with a positive direct examination result on breathing sampling accounted for 30% of pulmonary cases in children under 15 years of age, compared to 56% in patients aged 15 years and older (p<0.001) [7]. These results show that in older children, the bacilloscopy positivity rate is greater.

There were 6 death cases, i.e., a lethality rate of 4.96%. Tuberculosis-related mortality was higher among children under five years of age (16.67%). This could be explained by the fact that severe forms are more frequent in this age group. Higher lethality has been reported in other studies in Botswana (10.5%) and Malawi (17%) [11,12].

Our study was conducted in hospital settings attended by sick children, which may be a limitation in the assessment of prevalence. Similarly, poor record keeping and lack of systematic screening for HIV and malnutrition among these children with TB are also limitations. Therefore, multicentric studies including more advanced diagnostic techniques (Genexpert, culture on specific environment) as well as research into contributing factors (HIV and malnutrition) could help to improve the tuberculosis characteristics in children in Senegal.

This study shows that tuberculosis prevalence remains high in children with a predominance of pulmonary forms. The bacilloscopy positivity rate is higher in children over 5 years of age, whereas severe and extra-pulmonary forms are dominated by children under 5 years of age. The still high mortality rate despite the treatment raises the problem of multi-resistance. It is therefore necessary to carry out further studies in order to identify the factors contributing to the perpetuation of this epidemiological situation.