Tritium In Human Urine In The Areas Of Nuclear Enterprises In The Urals.

A study of human urine taken from the subjects living in the impact zone of Beloyarskaya Nuclear Power Station (the town Zarechny) was carried out. In all the cases the dependence of tritium concentration in the urine on the tritium concentration in the drinking water was revealed. A highly valid correlation relationship was established between the parameters under study (the correlation coefficient was 0.98, with the significance level being 0.007). The values of individual doses for the population were calculated. The values for the doses varied in the range of 0.32-1.2, taking into account the fresh water consumption of 100 l/month (according to the norms of the drinking water consumption for the region under study), which amounted to 0.032- 0.12% of the dose limit for the population (1 mSv/year). The radionuclide entering the organism of the people living in the given region was established to predominantly originate from the drinking water. The obtained values were considerably lower than the action level for tritium given in the Radiation Safety Standards-99/2009, its value being 7600 Bq/l.

The β-particle of 3? has low penetration power (the maximum path in air under the normal conditions is 5.4 mm and 6.5 μm in a biological tissue) and in the case of external irradiation, it is fully absorbed in the upper layers of the organism integument [1]. The radionuclide is more dangerous as a source of internal radiation upon its entrance into the organism.

Possessing the energy of β-particles which is the lowest of all the radioisotopes, 3? leads to a considerable density of the tissue ionization (a number of ion pairs formed by a charged particle per unit of its path length). Besides, the path of the β-particle of 3? is considerably smaller than the geometrical dimensions of cells; thus, the action of 3? is localized near the source itself and the total biological effect depends on the geometry of its distribution in the organism tissues and microgeometry of its distribution in the cell [2,3]. Tritium oxide (tritiated water) is readily absorbed through undamaged skin and mucosas. It is quickly and evenly distributed in the liquid phase of the organism and is partially deposited as a fraction which is more firmly fixed in the organic compounds, its biological significance being unclear.

The biological half-life of tritium-containing water varies from 9 to 14 days for different people (on the average, 12 days).

Such radiation levels for personnel were observed at the early stages of the development of nuclear technologies both in routine work and in the emergency. Irrespectively of the way of entering the organism, tritiated water easily penetrates into hemolymph and comes into an equilibrium with all the body liquids.

At present, the main method to control the effective dose of internal radiation by tritium for people assumes studying the radionuclide content in urine or condensed water steam from the exhaled air [3,4-6]. Thus, to study the regularities of tritium entrance into the human organism in the allocation areas of the enterprises of the Nuclear fuel cycle is an important scientific and applied objective.

The aim of the study

To reveal the dependences of the tritium content in the biological liquids(urine) of the people living in the impact area of the Beloyarskaya Nuclear power station on the tritium concentration in drinking water.

The objectives of the study

1. To measure the tritium content in the urine of the subjects living in the town Zarechny in the close proximity of the Nuclear power station.

2. To reveal possible correlations between the tritium content in the drinking water and urine.

Here, the study site was the area of Beloyarskaya Nuclear Power Station. The object of the study was the urine taken from the subjects living in the town Zarechny. The samples were taken in the clinical laboratory of the local medical unit. The number of the subjects amounted to 50 people. The patients were of different age and gender. The research was carried out in the period from January, 2015 to November, 2015.

The research was carried out among teenagers aged 15-18, as well as among the adult working-age population in the age groups of 20-25, 27-39 and 45-57 years. The age groups were formed taking into account the subjects who volunteered to participate in the research without any preferences on the part of the researchers. Urine samples having the volume of 200 ml were provided for the study. All the subjects live in the town Zarechny. The data on the tritium content in the samples of fresh water from the water supply facilities of the town were obtained directly by us, as well as, use was made of the statistical results given in the papers by Chebotina et al. where the authors also describe the water supply sources of the region under study [7,8]. The water samples were taken arbitrarily during the whole research period, i.e. from January to November, 2015. The procedure for the sampling and determining the tritium content was arbitrary but at least two times a month. The samples were collected in the same water supply facilities (i.e. the same sampling sites: flats and institutions at the same time).

In the laboratory the urine samples were purified. To remove the matrix containing a considerable amount of salts the urine samples were purified by the method of the distillation of azeotropic mixture with toluene using the installation designed by the author [9,10]. After the separation of the matrix the aqueous solution was purified from any possible coloured compounds to remove the quenching effect according to the investigations carried out earlier [11] and to the recommendations [12,13].

The water samples did not require additional purification and just before the experiment they were filtered through a membrane filter, with its pore diameter being 0.45 μm.

Before the measurements the scintillation cocktail UltimaGoldAB (V=12 ml) was poured into clean vials and cooled down to the targeted temperature in the absence of light. Then, the necessary quantity of the studied samples (V=8 ml) was taken with a pipette and introduced into the vial. The vial was corked and shaken until the sample and scintillation cocktail mixed completely. Before the measurements the mixture was kept in a dark cool place for 24 hours to stabilize the luminescence.

Standard and background (reference) samples were prepared along with the main samples to minimize the measurement error. The measurement time for the samples under study was 8-24 hours.

The tritium content was measured in the studied samples using a liquid-scintillation spectrometer-radiometer Quantulus-1220 by PerkinElmer (USA).

All the results obtained were subjected to the statistical analysis according to the instruction provided by Drugov and Rodin [14].

The mean value for each data set was calculated with respect to every estimated parameter:

Further, the mean-square error caused by the variation in the experimental data was calculated:

Table 1 presents the results of detecting tritium in the urine of the studied subjects of different age and gender. The presented results were obtained for all the groups at the same time intervals. During the whole period the same people participated in the study, except for insignificant occasional exceptions, which hardly influenced the total quantity of the subjects under investigation.

Table 1. The mean concentration of tritium in the urine samples of the studied subjects, the town Zarechny, and the confidence interval (±Δ).

Table 2 presents the results of detecting tritium in the drinking water taken in the water supply system of the town Zarechny during the study.

Table 2. The mean concentration of tritium in the drinking water in January-February, 2015 and the confidence interval (±Δ).

Figure 1 presents the correlation dependence between the mean tritium concentration in the urine samples of the studied patients during a certain period and the mean tritium concentration in the drinking water in this period (based on the statistically average studies in the town Zarechny and our own results). The age groups were made according to the subjects being examined who volunteered to take part in the study without any preferences on the part of the researchers. 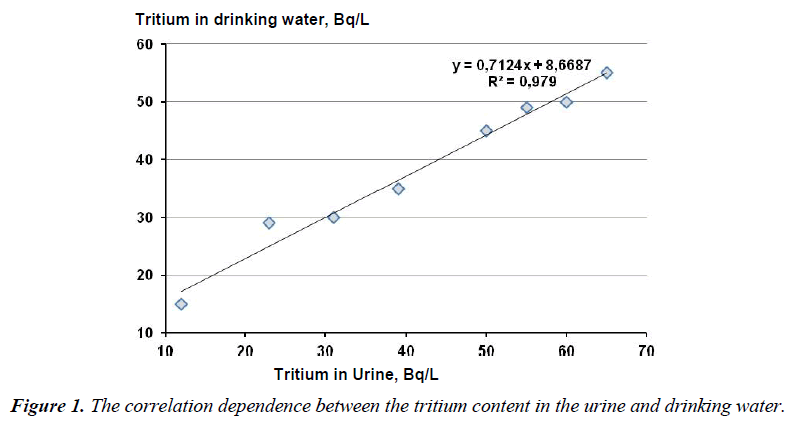 Figure 1. The correlation dependence between the tritium content in the urine and drinking water.

The statistical analysis of all the data set using a computer program Statistica by the Fisher method allowed one to establish the reliable direct correlation between the tritium concentration in the urine and its concentration in the drinking water, which is in agreement with the earlier obtained data on the given problem [13,15-19].

The results of the presented study demonstrate the following.

In the zone located near the Nuclear fuel cycle enterprise, namely Beloyarskaya Nuclear Power Station, the obtained values concerning the level of the tritium content in the drinking water and human urine are much lower than those for the action level presented in the Radiation Safety Statndards-99/2009 [20], the latter being 7600 Bq/l.

The study was partially supported by the Russian Foundation for Basic Research, project 05-16-00205.