Pulmonary Epithelioid Hemangioendothelioma (PEH) is one rather rare low-grade malignant tumor. Owing to its relatively low incidence, standard treatments on PEH are relatively less. A 52 y old male PEH patient treated with endostatin had received outstanding clinical outcome, considering his brain metastases and pleural effusion were both negative effects upon prognosis. Patient’s pathological characteristics, iconographic characteristics would play an essential role on his response to clinical treatment and prognosis. So far, standard treatments upon PEH are still not available, and the inhibition of tumor growth can be achieved through inhibition of tumor angiogenesis and interrupting cellular nutritious supply.

Pulmonary Epithelioid Hemangioendothelioma (PEH) is an uncommon lung malignancy of endothelial origin [3] which was first described in 1983 [4] and it normally happen as a bilateral multiple nodules in young females [5,6].

Some cases initially presenting small nodular densities at the bases of the lungs followed by bilateral pleural effusions [7]. Some case with the initial manifestation as a pseudoaneurysm caused by the rupture of the right pulmonary artery after tumor invasion and the diagnosis was confirmed by the morphologic and immunocytochemical features after surgery [8].

Besides demonstrating unpredictable presentation features and prognosis, the paucity of established treatment guidelines remains a challenge in managing these patients [9].

Wide surgery is probably associated with a better prognosis [10]. Some were treated with pazopanib as first line [11]. A recently reported protocol of 33 radiation fractions totalling 5,940 cGy was also applied and in 8 y after surgery and RT revealed neither recurrence nor any change [12].

A 52 y heavy-smoking male Chinese was registered with pulmonary nodules in December 2012. The patient has hypertension, hyperlipemia and hypercholesterolemia, and was treated with zocor and metoprolol for 15 y. The period before registration, he had experienced weight loss, dry cough and chest pain. And highly metabolize bilateral pulmonary nodules were found from PET-CT (Figure 1) and CT (Figure 2A) with no other specific symptoms. With consideration of his physical conditions, surgical resection was performed on December 17th 2012, and three circular, medium hard goiters were removed from the tip section of his left lung. According to the IHC results of tumor tissue, the patient harbored positive CD 34 and CD 31. It is hard to make an accurate diagnosis according to the pathological characteristics. This study was conducted in accordance with the declaration of Helsinki. This study was conducted with approval from the Ethics Committee of the Fourth Hospital of Hebei Medical University. Written informed consent was obtained from participant. 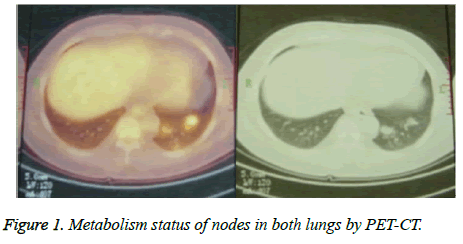 Figure 1: Metabolism status of nodes in both lungs by PET-CT.

Figure 2: Multiple nodules of both lungs (A: preoperation of CT; B: 2 months postoperation of ACT; C: Most recently, 16 months after the operation, of CT).

Considering the pathological situations and willingness of the patient, no treatment was applied upon him. ACT (Figure 2B) was applied two months after the surgery, and the results demonstrated multiple nodules of both lungs and implied metastases of tumor, enlargement of subcarinal lymph nodes, thickening of left pleural, and effusion of left pleural. Three months after the surgery, the patient took some exercise, like table tennis, and got headache, fever and unconsciousness. As a result, multiple irregular heterogeneous density of bilateral cerebral hemisphere, high density of left frontal lobe, narrowing of left ventricle, shallow or disappeared part of brain sulcus was found through CT, and his PS has dropped from 0 to 2 immediately. Furthermore, rupture and bleeding of metastatic brain tumor through MRI (Figure 3). After 3- dimentional conformal and whole brain radiation therapy, supportive therapy has been applied and improved his symptoms, like lowering the intracranial pressure. With the appearance of soft sarcomas under his epithelial bilateral arms and left rib, other symptoms have shown up, like poor mobility, pressure pain and poor quality of his somnia. A close detection of CT was performed on April 9th 2013 (Figure 2C) and found that the number and size of multiple nodules have dramatically increased and enlarged, new nodules have shown up in adrenal gland and left ribs have been destructed. Therefore, another tumor tissue was used for IHC detection, considering the results of IHC and clinical suggestions of several experts, the patient was eventually diagnosed as PEH. Recombinant human endostatin works as anti-angiogenesis medication and succeeds in clinical treatment of non-small cell lung cancer. Since no standard treatment is available, the patient was treated with recombinant human endostatin 7.5 mg/m2, d 1~14. With any luck, patient experiences relatively stable disease stage for two weeks, and the side-effect is not intolerable. In July 2013, the number of subcutaneous nodules has increased and multiple metastases were detected inside his brain. The patient died in the middle of July. The overall PFS is approximately 2 months, and his overall survival is approximately 8 months. 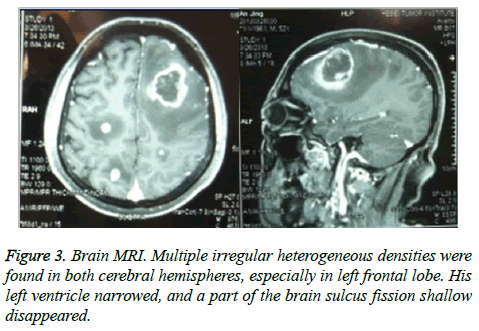 Approximately half of PEHs (49.5%) has no identifiable clinical symptoms and share some symptoms with lung cancer, such as thoracic pain (16%), cough and mild dyspnea (18.3%), occasional hemoptysis and weight loss (6.5%) [6]. Almost three quarters of PEHs are female and 65% share with bilateral multiple nodular opacities [13-16], which may be a vital factor of poor prognosis. In this case, the patient was a 52 y old male with chest pain, cough and weight loss.

From the picture of his CT, small nodules diffused in both lungs and proliferated along small vessels or tracheole with clear or blurred edge (<15 mm) located next to the subpleural region and showed traction syndrome towards pleura. The cells of PEH were either round or polygon, and proliferated around vessels, resulting in forms of isolated nodules and multiple nodules, and normally non-calcification. As a matter of fact, those tumor cells share the same characteristics with epithelioid hemangioendothelioma [13-15], such as round or polygon shape, rich in transparent eosinophilic cytoplasm, cytoplasmic vacuoles and vesicular nucleus, which could play a vital role in the diagnosis of PEH. Besides, the IHC results of his tumor tissue showed positive of CD 34 and CD 31, which imply that CD 34 could play a vital role in the diagnosis of PEH [6]. Moreover, IHC results of this patient share some same characteristics with squamous cell carcinoma, like negative TTF-1 and p63 [17], which could also play a vital role in diagnosis. Therefore, both the histological characteristics of tumor cells and specific IHC results play an essential part in diagnosis of PEH.

Normally, enlargement of mediastinal lymph nodes and occurrence of pleural effusion [5,6,16] equal to poor prognosis, while age, gender and smoking history cannot be used as significant prognosis factors [6,16,18,19]. A review of 75 PEH patients by Patrick et al. [5] states the median survival period of patients with blood pleural effusion would be less than one year, and this conclusion has also been proved in Asia [16]. Besides, central nervous metastasis and dyspnea seem to make a great contribution to poor prognosis [6,18], and in this case, the patient has experienced enlargement of subcarinal lymph nodes and left pleural effusion, and his brain metastasis and dyspnea may be another factor that lead to rapid disease progress and poor prognosis. As a result, and three months after the resection surgery, brain metastases were found and physical status has dropped to 2, and the application of endostar could only provide patient with 2-month PFS.

In the past six months, several case reports on PEH have been published, and only a few demonstrate to be self-curable [16]. The current prior therapy for single nodule from lung is always surgical resection, like wedging resection or pulmonary lobectomy. After the wedge surgery of this patient, he remained PS0 for three months, which imply surgery might be a basic primary treatment of PEH.

Unfortunately, PEH show resistances to several chemotherapies [5,14-16,20-22]. A case report of PEH published in 1999 illustrates that 6 cycles of NSC-141540 and carboplatin provide this patient a good chance of Complete Response (CR) and his PFS period lasts for 18 months [20]. Another case report from Poland researchers on advanced PEH states that 3 months treatment with interferon-α (3 million units per day, 3 d a week) has down-regulated the size of PEH, but resulted in intolerable side-effects [5]. Some scholars believe part of lung PEH patients have positive hormone receptors [14], therefore, endocrine therapy could be one of the most effective therapies for those patients, especially in females, considering to the contributions of normal receptors for oestrogen and progesterone [5,16]. Besides, sorafenib could be a first-line treatment for PEH [19].

Moreover, since tumor cells proliferate along with the developments of vessels, applications of anti-angiogenesis drugs should theoretically provide effective treatment for PEH. Thalidomide, as an inhibition of angiogenesis, has been reported that thalidomide has played a vital role in treatment of metastatic hepatic epithelioid hemangioendothelioma [21,22]. Considering the physical status and previous treatments of the patient, targeted therapy seems to be a better option, especially vessel targeted. Therefore, endostar was used as the only therapy, owing to the fact that bevacizumab could not have a significant influence on PEH treatment [23]. As a matter of fact, during the whole period of endostar treatment, subcutaneous nodules became less swollen and his status was stabilized for two months. With the development of tumor, the organs of his whole body went on failure and led to death. According to another case of a 40-year old male Chinese [6], endostar could only stabilize disease and not be able to contribute to minimize the size or number of nodules. The possible reasons that endostar did not help this patient long enough are the amount of endostar usage and the delayed timing of endostar treatment.

Malignant heaemangioendothelioma are normally treated with radical excision [14]. The patient was treated with radiotherapy, which probably play a vital role in the prolonged OS of this patient. Although both Chinese patients had brain metastases after surgery, the 40 y old patient treated with endostar, cisplatin, paclitaxel for 3 cycles only had a OS of 6 months while there was no sign of his pleural effusion [6], whereas, this 52 y old patient with pleural effusion treated only with half amount of endostar had a OS of approximately 8 months, which suggests radiotherapy could probably play a vital role in the treatment of PEH. Similar to this case, a Spanish PEH patient had a PD after radiotherapy and died in 18 months after the first diagnosis [18].

So far, standard treatment to PEH is not available. Although targeted therapy or combined with chemotherapy have been applied upon PEH for years, no big progress has been made. Surgical resection seems to play a fundamental part in the treatment of PEH, while chemotherapy seems to contribute less than endocrine therapy, and vascular targeted therapy, such as endostar, seems to have an influence on disease stabilization. Besides, radiotherapy seems to play a vital role in the treatment of PEH. In a word, combination of radiation therapy with endostar after surgical resection could be an effective treatment for PEH.

Give all the thanks to staffs of our institute that have been working on the case with us. Also, give thanks to the relatives of the patient for giving permission on the case release.