Transperitoneal laparoscopic adrenalectomy for a large pheochromocytoma: case report and review of the literature

Methods: A 26-year old man had a 20 cm retroperitoneal mass that was revealed by a contrast enhanced computed tomography and his preoperative blood epinephrine level was 421.41 pg/ml(normal range, <100 pg/ml). The patient was suspected to have a pheochromocytoma and received preoperative treatment with α-receptor blocker terazosin. A 20 cm retroperitoneal mass was successfully removed by transperitoneal laparoscopic approach.

Results: The operative time was 180 min and blood loss was 100 ml. No intraoperative or postoperative complications developed in the patient. Pheochromocytoma of right adrenal gland was confirmed by histopathology.

Conclusions: This case report suggests that adrenal tumor up to 20 cm in size may be treated by transperitoneal laparoscopic approach without complications. The experience and sufficient preoperative preparation are important for the success of the procedure.

A 26-year old previously healthy man was referred to authors' hospital with a huge retroperitoneal mass revealedabdominal ultrasonography. He had a 1-month history of a huge retroperitoneal mass and was otherwise asymptomatic. Physical examination revealed an abdominal mass and rebound tenderness in the abdomen. Upon pressing the mass, the patient complained of palpitation and dizzy. His blood pressure was 145/91 mmHg, and resting heart rate was over a hundred beats per minute at admission. The blood tests and tumor marker levels (serum CA19-9 and CEA levels) were normal. There was no history of hematuresis, weight loss or bowel obstruction.

The patient’s preoperative blood epinephrine (E) and norepinephrine (NE) level was 421.41 pg/ml (normal range, <100 pg/ml) and 337.81 pg/ml (normal range, <600 pg/ml), respectively. A contrast enhanced computed tomography scan revealed a round-shaped mass that was about 20 cm in diameter with central areas of necrosis. The mass was in close proximity to and located between the liver and the right kidney. Furthermore, the mass was pressing and deforming the upper pole of the right kidney (Figure 1). 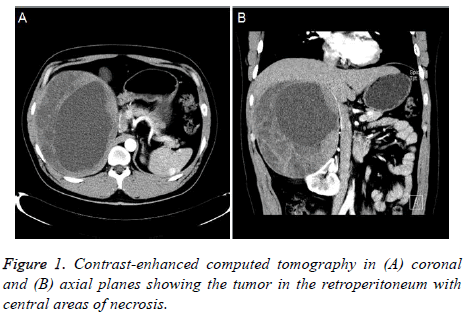 Figure 1. Contrast-enhanced computed tomography in (A) coronal and (B) axial planes showing the tumor in the retroperitoneum with central areas of necrosis.

Preoperatively, the patient was suspected to have a pheochromocytoma and was treated by selective α-receptor blocker terazosin (2 mg, once a day for two weeks) to control hypertension and improve blood vessel capacity. The patient was offered to be treated by laparotomy or laparoscopic approach for pheochromocytoma. After careful preoperative hemodynamic optimization, the patient agreed to undergo transperitoneal laparoscopic approach.

The procedure was performed with the patient in left lateral position. We employed four ports (Figure 2). A 1.0 cm skin incision was made lateral to the right of the umbilicus, and a 10 mm trocar was inserted to induce pneumoperitoneum. 12 mm and 5 mm trocars were then placed on the right mid-clavicular line under the costal arch and on the anterior axillary line above the iliac crest, respectively. The accessory port was positioned between the 12 mm trocars and the umbilicus. The dissection was initiated at the Gerota’s fascia. Subsequently, the large round-shaped mass was exposed, and the upper pole of the right kidney was pressed. With blunt dissection, right renal artery was freed between the right kidney and the tumor. The right renal artery gave off three branches. One of these branches was then followed caudally to the blood vessels that nourished the tumor, and was ligated and divided between clips. Next, careful dissection along inferior vena cava allowed the identification of right adrenal vein which was clipped and divided. As authors dissected this sheet, the tumor arising from the adrenal gland was identified. The adrenal gland and remaining attachments were cut with ultrasonic scalpel. The resected specimen was retrieved into an end pouch by 15 cm incision by extending the 12 mm port (Figure 2). A drainage was placed in the adrenal space. 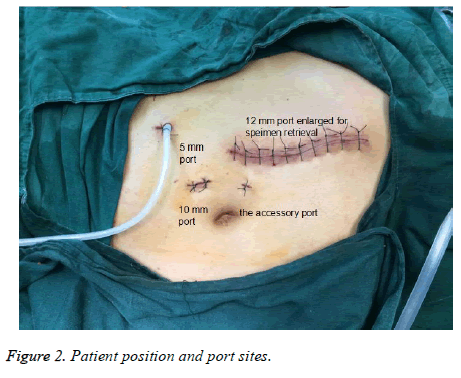 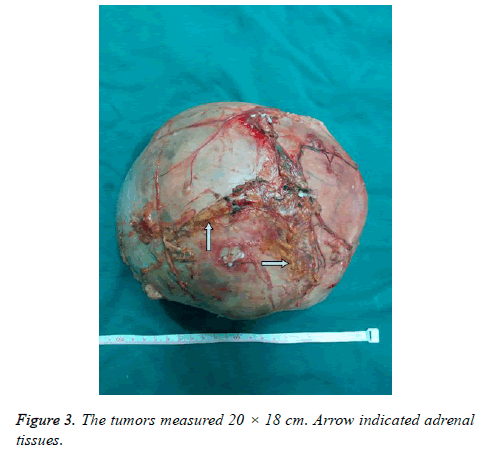 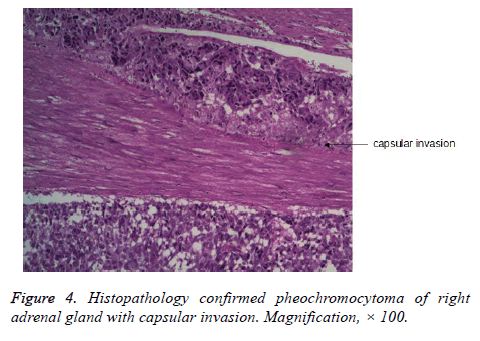 Laparoscopic adrenalectomy is the standard surgical treatment for the vast majority of adrenal tumors [7,8]. However, adrenal pheochromocytoma has been considered as a relative contraindication for the laparoscopic approach to adrenalectomy [8]. The reasons include potential hemodynamic instability with tachycardia, blood pressure fluctuations and low blood volume due to the stimulation of pheochromocytoma and pneumoperitoneum pressure. Therefore, intraoperative blood pressure and the risk of squeezing of the tumor present intractable problems for anesthesiologists and surgeons. Gill described laparoscopic surgery involving a milder stimulation technique compared to laparotomy [9]. Furthermore, the development of vasoactive drugs, the improvement of anesthetic technique and monitoring, and the application of laparoscopic surgery have dramatically improved postoperative management of patients undergoing surgical excision for pheochromocytoma. Several studies have shown that early ligation of the adrenal vein could lead to catecholamine-induced hypertensive crisis [10,11]. In this case, authors used selective α-receptor blocker terazosin to control arterial blood pressure and enlarge blood volume to normal prior to surgery. On the other hand, minimal manipulation and dissection of this large mass was performed prior to early ligation of adrenal vein during operation, Moreover, the procedure was smoothly manipulated by an experienced surgeon, and the patient showed stable fluctuations in blood pressure [12-20].

Is authors' procedure considered minimally invasive with the 15cm incision required at the end of the procedure? In general, minimal handling and intraoperative morbidity support a minimally invasive approach for resecting a large pheochromocytoma compared to open approach. Furthermore, the incision can avoid tumor spillage which leads to peritoneal implantation with pheochromocytoma. On the other hand, open approach requires a larger incision (about 30 cm) for manipulation, and increases postoperative pain, abdominal adhesions, and incisional hernia. Consequently, our laparoscopic technique is in line with the principles of minimally invasive surgery.

In conclusion, this case report suggests that adrenal tumor up to 20 cm in size may be treated by transperitoneal laparoscopic adrenalectomy without complications. The experience and sufficient preoperative preparation are important for the success of the procedure.

Ethics Approval and Consent for Publication

Written informed consents were obtained from the patient for publication of his clinical and imaging data. A copy of the written consent is available for review by the Editor-in-Chief of this journal. The ethical review has been approved by our ethics committee.

The authors have no conflict of interest or financial ties to disclose.