3Institute of Neurology, Psychiatry and Narcology of the National Academy of Medical Sciences of State Institution, Ukraine

Stroke is the second most common cause of morbidity worldwide (after myocardial infarction) and is the leading cause of acquired disability [1]. Presence of stenosis of the main arteries of the brain significantly worsens theprognosis and internal introduction of the recombinant tissue plasminogen activator. The developed clinical scales allow predicting the presence of arterial occlusion with an accuracy of 85%. Previous studies have shown high efficacy of intra- arterial injection, which increases the degree of intra-arterial thrombolysis.

Stroke is the second most common cause of morbidity worldwide (after myocardial infarction) and is the leading cause of acquired disability [1]. Presence of stenosis of the main arteries of the brain significantly worsens the prognosis and internal introduction of the recombinant tissue plasminogen activator. The developed clinical scales allow predicting the presence of arterial occlusion with an accuracy of 85%. Previous studies have shown high efficacy of intraarterial injection, which increases the degree of intra-arterial thrombolysis [2,3].

In many neurological clinics in acute ischemic stroke, reperfusion therapy is performed. For rapid diagnosis and adequate therapy, non-contrast CT of the brain, perfusion CT and CT angiography are used. Both CT and MRI allow you to determine the time of the onset of a stroke, since the visualization functions develop in a reasonably predictable manner. To eliminate the existing disagreement in the terminology, denoting time from onset, the following definition was proposed [4]:

In case of suspected acute ischemic stroke, the purpose of using CT is: 1) to reveal the rupture of the main arteries of the brain, if any, that can hinder the effect of thrombolysis; 2) to search for the slightest signs of ischemia; 3) to exclude brain tumors, aneurysms of large brain arteries that can mimic a stroke.

Compared to un-contrast CT, perfusion CT has a four-fold accuracy in the diagnosis of ischemic stroke, permits differentiation of irreversibly damaged brain tissue from reversibly impaired "tissue at risk” and is used to select patients for reperfusion therapy [5,6]. CT and MR angiography allows to determine the causes and mechanisms of the onset of a stroke, the degree of expansion of the cerebral infarction and the localization of the occlusion of the arteries. These methods can be used to identify the expansion of potential viable brain tissue (semitraum) and irreversible brain damage (core) using CT perfusion and/or diffusion weighting and perfusion weighted MR imaging [7]. In the last 2 decades, along with CT and MRI in the diagnosis of ischemic stroke, transcranial dopplerography is used to determine the site of stenosis of the main arteries of the brain [8-11].

Explored by Brunser et al. have shown that PMD-TCD is validated with CTA for the diagnosis of arterial occlusions in patients with acute ischemic stroke, especially in the MCA, and can be implemented in many ERs that have less access to CTA or MRA. Patients in the middle clinical probabilities of an arterial occlusion benefit from a rapid, low-cost examination performed at the ER, which can discriminate those patients who should be closely monitored and treated more aggressively [12].

The presented literature data demonstrate the relevance of the diagnosis of hemodynamic changes in the basin of the middle cerebral artery in hemispheric ischemic stroke.

A retrospective analysis of the results of transcranial dopplerography (TCD) of the middle cerebral artery was performed in 104 patients with left hemispheric ischemic stroke (IS) caused by atherosclerosis of the internal carotid (IC) and middle cerebral arteries (MCA). The age of the subjects was 41-80 years, among them 49 (47.1%) men and 55 (52.9%) women. Hemorrhagic stroke, stroke of undetermined etiology, cryptogenic stroke, and bilateral ischemic strokes were excluded.

The study was conducted without preliminary preparation of the patient in a supine position. Scanning starts in B mode with visualization of the brain structures from the transtemporal (through the scales of the temporal bone) access. The pyramid of the temporal bone served as a reference for the identification of vessels of the circle of Willis. From the transtemporal access, the internal carotid siphon, middle, anterior and posterior cerebral arteries were visualized. The maximum systolic velocity (Vs), the end diastolic velocity (Vd), average systolic velocity (TAMX), the resistance and pulsativity indexes (RI, PI) in MCA were determined [13].

The control group consisted of 48 patients without cardiovascular diseases, atherosclerotic plaques in carotid arteries of the same age and gender composition. 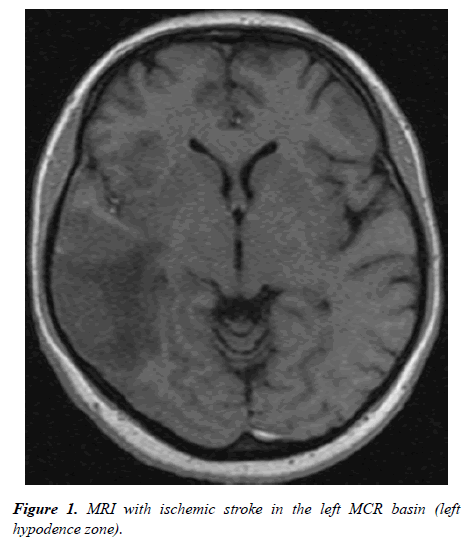 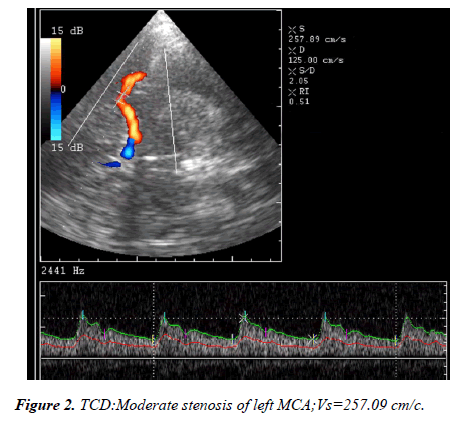 TCD results were compared in patients aged 40-60 years and 61-80 years on the side of the lesion and the contralateral side (Table 2).

Table 2: Hemodynamic parameters in MCA in patients with Ischemic Stroke measured during the first day of the disease on the affected and the contralateral sides, taking into account the age. 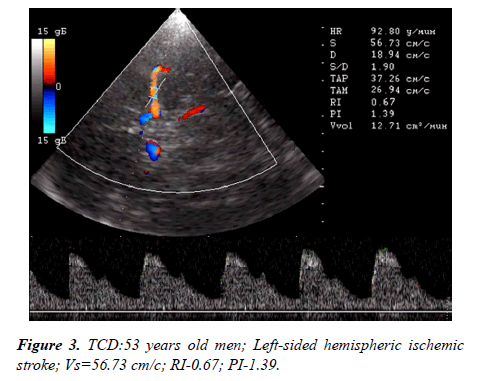 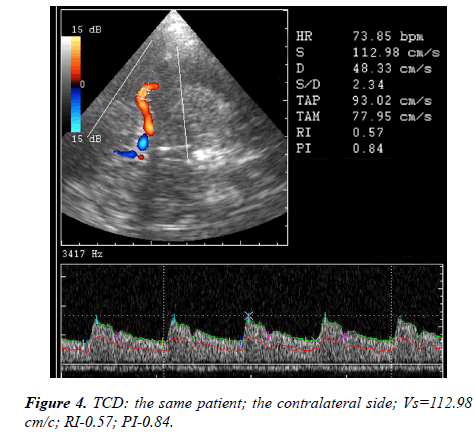 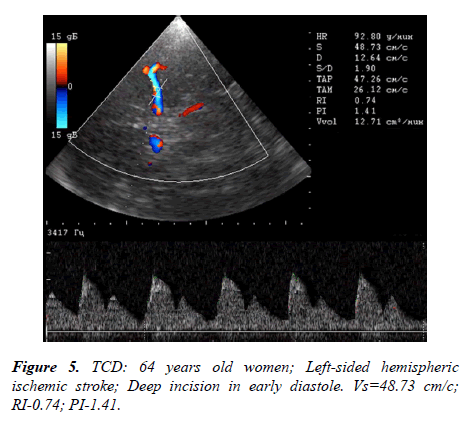 Table 3: Hemodynamic parameters in MCA in patients with Ischemic Stroke measured during the 21 day of the disease on the affected side. 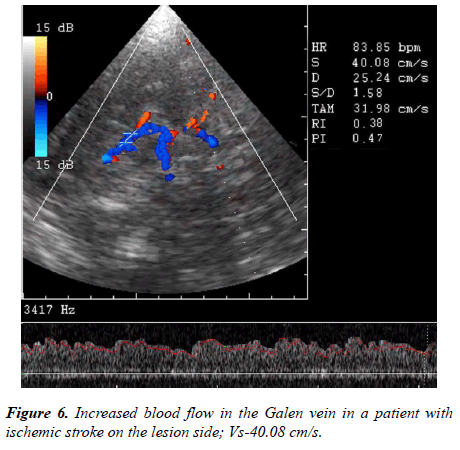 Figure 6: Increased blood flow in the Galen vein in a patient with ischemic stroke on the lesion side; Vs-40.08 cm/s.

Cerebrovascular ultrasound is successfully used to determine vascular patency in patients with acute stroke. Transcranial dopplerography can be performed by a trained person at the patient's bedside within a few minutes [14]. Dopplerometric blood flow parameters give information about occlusion, recanalization, and reperfusion following thrombus dissolution, as well as reocclusion. То монитор these critical changes, several grading systems were developed to classify residual flow status in acute stroke patients.

As the most widely known system, TIBI (Thrombolysis in Brain Ischemia) and COGIF (Consensus on Grading Intracranial Flow Obstruction) [15], which is a modification of the TIBI system to TCDI, correlate well with the initial stroke severity, mortality, likelihood of reperfusion, and clinical improvement. The role of transcranial dopplerography in the study of ischemic stroke is shown in previously published scientific papers [16,17].

Dopplerometric monitoring on the 21st day of the disease made it possible to provide us with prognostically unfavorable blood flow parameters. Improved visualization of deep veins, increased blood flow in them was additional indirect signs of brain damage in left-sided hemispheric ischemic stroke.

In patients with hemispheric ischemical stroke, stenosis of the middle cerebral artery, a systolic blood flow velocity less than 70 cm/s, an increase in the resistance and pulsation index is often observed. On the contralateral side, in persons up to 60 years of age, the blood flow velocity may be slightly increased in comparison with healthy individuals.

With ischemic stroke on the side of the lesion, visualization of the deep veins of the brain improves because of the increase in speed in them.

The authors declared no potential conflict of interest with respect to the research, authorship, and/or publication of this article. 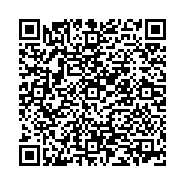