The oxidative stress theory of aging offers the best mechanistic elucidation of the aging phe-nomenon and other age-related diseases. The susceptibility of an individual depends on the antioxidant status of the body. Objective of our study is to compare the antioxidant defense status in elderly individuals with the young people by measuring total antioxidant activity (AOA) in both the groups. Twenty five elderly people within the age group of 60± 10 yrs and 25 young individuals of 25 ± 7 yrs were chosen for the study. Sick and individuals on treatment were excluded from the study. Total AOA was estimated by a spectrophotometric method. We found a significant reduction in total AOA in elderly people with 1.06 ± 0.16 mmol/L as compared to 1.63 ± 0.25 mmol/L in young individuals. This reduction in AOA implies a defect in antioxidant system, may be due to a reduction in individual antioxidant or may be caused by a nonequilibrium or poor cooperation between them. Further studies need to be conducted to find out whether AOA levels can be used as a marker to predict any complications of old age.

Free radicals have been proposed as an important causa-tive agent of ageing. It has been suggested that ‘ageing increases because of free radical damage’ [1]. Ageing can be viewed as a process of irreversible injuries associated with the accumulation of reactive oxygen species (ROS). The biological effects of ROS are controlled in vivo by a wide spectrum of enzymatic and nonenzymatic defense mechanisms such as superoxide dismutase(SOD), which catalyzes the dismutation of superoxide anions to H2O2, catalase which converts H2O2 to molecular oxygen and H2O. Selenodependent glutathione peroxidase catalyzes the degradation of H2O2 and hydroperoxides originating from unsaturated fatty acids at the expense of reduced glutathione [2]. According to the free radical theory of ageing , one might expect the activity of antioxidant en-zymes to be altered [3].

The study was conducted on 50 healthy individuals. Twenty five subjects at the age group of 60 ± 10 yrs (13 males and 12 females), who came to the KMC hospital for general check up were selected and placed in the test group and 25 young people ageing 25 ± 7 yrs (14 males and 11 females), working in the hospital, were taken as control group. All the subjects were subjected to a thor-ough clinical examination and biochemical investigations to detect signs and symptoms of chronic diseases such as hypertension, diabetes mellitus, anemia etc. Individuals suffering from any chronic disease and/or under drug treatment were excluded from the study. The subjects in our study were nonsmokers and nonalcoholics. The pur-pose of our study was explained to the subjects and their consent was taken. The study was approved by the institu-tional ethical committee.

One mL of venous blood was collected in EDTA bottles using disposable syringes, plasma was separated. Total AOA was accordingly determined [4].The assay measures the capacity of the serum to inhibit the production of thiobarbituric acid reactive substances (TBARS) from sodium benzoate, under the influence of the oxygen free radicals derived from Fenton’s reaction. The reaction was measured spectrophotometrically at 532 nm . Antioxi-dants from the added sample cause suppression of the production of TBARS and the inhibition of colour devel-opment is defined as AOA.

Statistical analysis was done by using paired ‘t’ test and the data were expressed as mean ± standard deviation.

A significant reduction in total AOA in elderly individu-als (1.06 ± 0.16 mmol/L) as compared to controls (1.63 ± 0.25 mmol/L; P<0.001) was recorded (Table). We did not find statistically significant difference in AOA between males and females of each group. 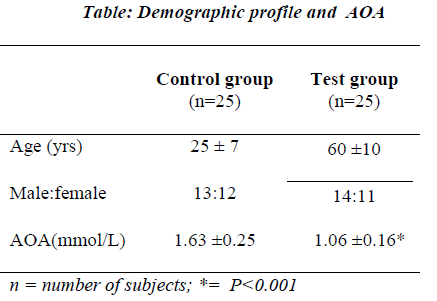 We have observed a significant reduction in AOA in eld-erly individuals (P< 0.001) as compared to young indi-viduals. Decrease in AOA implies a diminution of anti-oxidative capacity which may be caused due to the reduc-tion in individual antioxidants. Guemouri et al [2] have reported a decrease in SOD, catalase and glutathione per-oxidase, the three main enzymatic defence systems, against free radicals. Several studies have reported an age-related decline in erythrocytic SOD(5-7). Decrease in nonenzymatic antioxidants like vitamins C, E, A, caroti-noids, total thiol groups are also reported [8,9]. Decrease in reduced glutathione, the main nonprotein antioxidants in the cell , has a key role in the protection against free radical damage [10].Therefore, the decreased total AOA found in our study can be attributed to the diminution of the individual antioxidants. In contrast to these reports, higher plasma SOD, catalase activities in elderly people were reported in a recent study [11].This can be ex-plained as the induction in enzymatic activity as a compensatory response of the individual to an increased oxi-dative stress during ageing. With this theory of elevated individual antioxidants, the total AOA should also rise. The total antioxidative serum capacity is not a simple sum of the activities of the various antioxidative substances but the cooperation of the antioxidants in human serum that provides a greater protection against attacks by free radicals. It is the dynamic equilibrium between various antioxidants . A nonequilibrium or poor cooperation be-tween the antioxidants may possibly result in low AOA.

In conclusion, a decline in total AOA in elderly people may have a crucial role in the development of patho-physiological changes of ageing. Further studies need to be conducted before prescribing AOA as a marker in predicting age-related complications.