Tildipirosin may cause cardiotoxicity in sheep

Tildipirosin is a 16-membered ring, tribasic and semi-synthetic macrolide antibiotic. The aim of this study was to determine the safety of tildipirosin following a single treatment at doses of 4 mg/kg and 8 mg/kg via subcutaneous injection. In the current research, tildipirosin (SC, single treatment) was applied at the doses of 4 and 8 mg/kg to the Normal Dose (ND) and High Dose (HD) group, respectively. Blood samples were gained before (0th d) and after treatments on 0.25, 0.5, 1, 3 and 21 d’s. Hemogram, biochemical and oxidative stress parameters were determined from blood samples. High dose tildipirosin increased cardiac damage parameters including creatine kinase-MB mass and partially troponin I within the first day, and high dose tildipirosin decreased statistically significant the thiobarbituric acid reactive substances levels on 1 and 3 d compared with ND group. Statistically significance fluctuations within reference ranges were observed in the biochemical and hemogram values. In conclusion, high dose tildipirosin may cause cardiotoxicity in sheep. However, cardiography, monitorization and histopathological evaluations should be done to determination of adverse effects of different doses of tildipirosin in sheep.

Respiratory system diseases have high morbidity and mortality rate in ruminants. Pasteurella multocida, Mannheimia haemolytica and Histophilus somni are the group of bacteria recognized as important pathogens in sheep. Therefore, the treatment is forefront [1-3]. Currently used antibiotics have been reported to develop resistance against these infectious agents depending on mutations and methylation [4,5]. However, tildipirosin has declared to least resistance developing antibiotics in macrolide group [4].

Antibiotics of macrolide group have cardiotoxic, nephrotoxic and hepatotoxic side effects. Especially tilmicosin causes the death in goats. Also, the drug can cause the death in target species including cattle and sheep [6-9]. Tildipirosin is newly synthesized and semi-synthetic-16 membered macrolide antibiotic that is similar structurally to tylosin and tilmicosin [10]. These antibiotics bind to 50 S ribosomal subunit of the bacterial cell wall. It has been approved by European Medicines Agency (EMEA) for the treatment of Mannheimia haemolytica, Pasteurella multocida and Histophilus somni infections at the single dose of 4 mg/kg (SC) in cattle [11,12]. Also, tildipirosin is used in the treatment of these infections in pigs [12]. Tildipirosin treats the respiratory tract infections and prevent chronic inflectional diseases in transported cattle [13]. The administration of tildipirosin is more effective than tulathromycin in Mannheimia haemolytica induced experimentally lung infection [14].

Tildipirosin has the long half-life and the large volume of distribution, and it remains long-term in the lung tissue (21-28 d) [15]. It has been used as extra label in sheep and other species, although its use in cattle and pigs has been approved by the EMEA. Though 4 mg/kg (single dose, SC) dose of tildipirosin is safe for cattle, 10 mg/kg (single dose, SC) dose may show cardiotoxicity in dogs [11,12]. Furthermore, EMEA and FDA have reported that it might cause the restlessness, ground to sleep, cough and severe inflammation, itching in injection site [11,12,16]. In addition, severe convulsions, lying behavior, wriggling, deep breathing and more frequent breathing, and serious loss of coordination has been observed before death in mice. Also, redness and itching has been stated in injection area [12,16].

Drugs may be beneficial as well as have some side effects. The side effects can result with changes in biochemical and hematological parameters [7,17,18]. Creatine kinase-MB mass (CK-MB mass) and troponin I (TnI) levels are evaluated for cardiac damage or cardiotoxicity, at the same time Thiobarbituric Acid Reactive Substances (TBARS) levels can be measured to determine the oxidative stress and the cellular membrane damage [19].

In the current research, it was aimed that determination of biochemical, hematologic, cardiac and oxidative stress parameters following normal (4 mg/kg, SC) and high dose (8 mg/kg, SC) administration of tildipirosin in sheep. It was also determined the difference between normal and high doses in these parameters.

Twelve Akkaraman sheep (4-5 ages, 50-60 kg) were used in the study. They had a known any drug exposure at last two months. Sheep were acclimated at least 14 d prior to dosing. They were examined by a veterinarian during the acclimation period, and only clinically healthy animals were selected for inclusion into the study. They were housed individual pens and fed twice daily with a commercially yearling feed; in addition, they received barley, vetch hay and sugar beet pulp ad libitum. Fresh water was available ad libitum.

The sheep were divided into two groups including 6 animals and average weights were similar in each group. To the Normal dose (ND), tildipirosin (Zuprevo® 18% inj., Merck Animal Health) was administered subcutaneously into axillar area at the recommended clinical dose of 4 mg/kg (single dose). To the High Dose (HD) received tildipirosin with the same route at the dose of 8 mg/kg (single dose).

Blood samples were collected by the catheter inserted into V. jugularis before (0th d, control) and after administration on 0.25, 0.5, 1, 3 and 21 d. The clinical inspections of the animals were performed with regard to the respiratory and digestive system at 0.5 d intervals for first 3 d and 1 d intervals on later days following tildipirosin treatment.

Data were presented as mean ± SE. The data was to be evaluated by Independent t test between groups at different time points (SPSS 22.0). P<0.05 was considered to be statistically significance limit.

Effects of tildipirosin on CK-MB mass and TnI levels are shown in Graphics 1 and 2, respectively. Although CK-MB mass level was higher in HD groups on 0.25 and 1 d compared with ND group, it was higher in ND group on 21 d (P<0.05, Graphic 1). The concentration of TnI in both groups were detected highest on 0.25 d, however statistical difference was not detected between groups (P>0.05, Graphic 2). 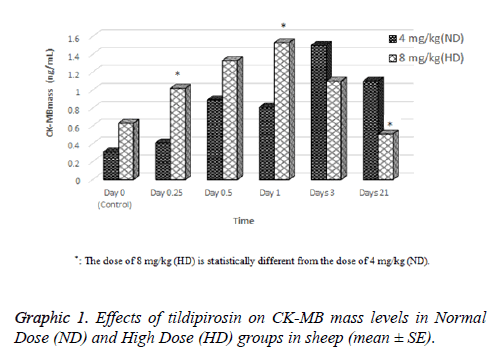 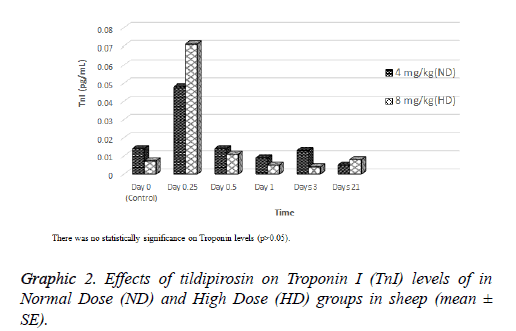 Graphic 2: Effects of tildipirosin on Troponin I (TnI) levels of in Normal Dose (ND) and High Dose (HD) groups in sheep (mean ± SE). 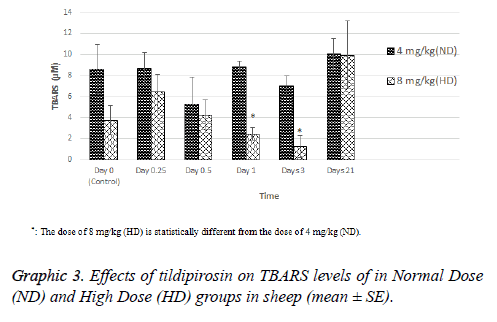 Effects of tildipirosin on hemogram values of ND and HD groups are presented in Table 2. In both groups, there were no statistical differences in the levels of hemogram parameters (P>0.05, Table 2).

Currently used antibiotics may no effective against Pasteurella, Mannheimia and Histophilus pathogens, because these pathogens can show the resistance [5,20]. In this reason, the use in the appropriate dosage of new antibiotics such as tildipirosin is important [21]. In the current research, clinical dose (4 mg/kg) and double clinical dose (8 mg/kg) have been selected as tildipirosin is strong the dose-response relationship [15].

In the present study, tildipirosin following the subcutaneous administration at doses of 4 and 8 mg/kg caused the mild itching in injection site, the dyspnea and the coughing for 2, 10, 2 d after treatment, respectively. The mild sedation, hunched posture, ruffled feathers, poor coordination, closing the eyelids and severe nasal discharge have been observed after orally the single dose administration of tildipirosin (2000 mg/kg dose) for the acute toxicity test in rats. Deaths following the intravenous administration at higher doses than 12.5 mg/kg have been reported in mice [12,16]. Some drugs can cause the physical stimulation at high concentrations [22]. As tildipirosin reaches to high concentrations in the lungs [15], it can cause transiently respiratory side effects in sheep.

In the current study, cardiac damage parameters (CK-MB mass and TnI) were fluctuated after tildipirosin treatment in both groups (Graphics 1 and 2). On the 0.25 and 1 d, CK-MB mass level in HD group was statistically higher than ND group. However, it was higher in ND group on 21 d than HD group (P<0.05, Graphic 1). In addition, the highest levels of CK-MB mass were on 3 and 1 d in ND and HD groups, respectively. TnI reached peak levels on 0.25 d in both groups, and it was higher in HD group than ND group (P>0.05, Graphic 2). CKMB and TnI levels reach the highest level within first day after heart injury [23]. Also, these parameters rise at 2-6 h after myocardial damage, and they can remain at high levels approximately 12 h [24,25]. Macrolide antibiotics may cause cardiotoxicity and arrhythmia as they increase the permeability in mitochondrial membrane of myocardial cells [26]. It has been reported that tilmicosin causes the cardiotoxicity in lamb [7], increases CK-MB levels in mice [27] and enhances TnI and CK-MB levels in rabbits [28]. Tulathromycin have increased TnI and CK-MB mass levels in sheep [18] and rabbits [29]. Tildipirosin has been declared high levels in plasma within 1 d following subcutaneously administration in cattle [15]. High levels of tildipirosin following the administration may cause the cardiotoxicity with the same mechanism caused other macrolide antibiotics.

ALB, ALP, BUN, CRE and TRIG levels were statistically different between ND and HD groups (P<0.05, Table 1). However, these levels were within reference ranges reported for sheep in both groups [31-33]. Treatments of tildipirosin and other macrolides has been reported to change levels of some biochemical parameters such as ALB, calcium, ALT and AST, BUN, CRE, total protein and globulin [11,16,34-36].

In the present study, tildipirosin application in ND and HD groups has no statistically significant effect on the hematologic values (P<0.05, Table 2).

In conclusion, tildipirosin following the subcutaneous application at doses of 4 and 8 mg/kg may cause cardiotoxicity in sheep. In addition, the dose increase due to the development of antibacterial resistance may be dangerous. On the contrary, high dose of tildipirosin may decrease oxidative stress for a limited time. However, cardiography, monitorizations and histopathological evaluations should be done for fully determination of side effects of tildipirosin in sheep.

Research was supported by the Coordination of Scientific Research Projects, University of Selcuk (Project No. 15401152). The abstract of this study was presented as oral presentation in “5th Animal Health and Veterinary Medicine Congress” September 26-28, 2016, Valencia, Spain.

The authors declare that no conflict of interests exists.