Theoretical investigation of the mechanism, stereoselectivity and regioselectivity of the epoxidation reaction of ÃÂ³-himachalene: MEDT screening.

In this paper we employed the MEDT method to examinethe mechanism, stereoselectivity and regioselectivity of the epoxidation reaction of γ-himachaleneyielding a γ-epoxyhimachalene P-1,which participates in two competitive reaction channels, from the energies, IRC and density maps of the transition state we can concluded that in oxidation reaction, the m-CPBA will participated as strong electrophile via a one-step mechanism. The regioselectivity experimentally obtained was verified by the nucleophilic Parr functions. Side selectivity, namely α and β of the double bond C7=C8 was predicted using transition state theory. This stereoselectivity is kinetically controlled in good conformity with experimental outcomes.

Plants represent an immense source of complex chemical molecules exploited in the perfume, agro-food, cosmetic and pharmaceutical industries. Most plants contain essential oils; they are then entitled “aromatic plants". These essential oils are found in many parts of the plant: wood, leaves, fruits, bark, seeds and roots. These are complex mixtures consisting of several tens, or even more than one hundred compounds, mainly terpenes and aromatic compounds. Essential oils have many biological activities; they are utilized for their antiseptic properties against bacterial diseases, for example against the endocranial bacteria [1] or at the level of the vaginal microflora [2,3]. However, they also have cytotoxic properties [4] that bring them closer to antiseptics and disinfectants as broad spectrum antimicrobial agents [5]. The essential oils have antibacterial properties, antioxidant activity [6] and potential applications in foods [7], essential oils or their active compounds could also be used as protection agents against phytopathogenic fungi and microorganisms invading foodstuffs [8,9].The essential oils of cedar of the Atlas which constituted by three elements such as α-himachalene, β-himachalene and γ-himachalene (Scheme 1 and Figure 1). 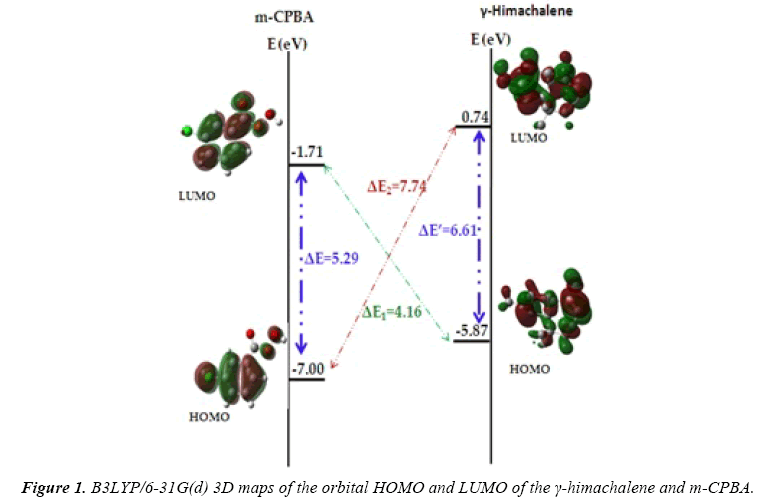 To improve the chemical and biological proprieties, the γ-himachalene, treated at ambient temperature with a stoichiometric quantity of m-chloroperbenzoic acid (m-CPBA) in chloroform, Regio specifically and stereospecifically leads to γ-epoxyhimachalene P-1 in quantitative yield (Scheme 2).

Herein, in order to comprehend the stereo-selectivity, the regioselectivity and the molecular mechanism of the epoxidation reaction of the γ-himachalene is performed in the MEDT using DFT/B3LYP/6-31G (d) methods.

All geometry optimizations computation was executed using the Gaussian 09 programs [10]. The geometries of the products were fully optimized through DFT calculations using the B3LYP functional [11,12] jointly in addition to the 6-31G(d) basis set [13]. The transition states, resultant to the two α and β epoxidation sides, were located at the B3LYP/6-31G (d) level by QST2 and QST3, their existence was validated by the existence of one and only one imaginary frequency in the Hessian matrix. The IRC [11] was performed and plotted to show that the TS is well connected to both minima (reagents and product). The effects of dichloromethane in energy calculations were taken into account using the model of the polarizable continuum (PCM) developed by the Tomasi group [14,15] as part of the self-consistent reaction field (SCRF) [16-18] Values of energies in dichloromethane were calculated with the standard statistical thermodynamics at 258 C and 1 atm. The total electron density transfer (GEDT) was calculated via the amount of the natural atomic charges (q), found by a natural population analysis (NPA). The global electrophilicity index, [19-21] w, is granted by the following formula,

are the electronic chemical potential and the chemical hardness respectively [22,23]. The nucleophilicity index, [24-26] N is defined as

Parr functions, [27-54] were reached by the analysis of Mulliken's atomic spin density.

Analyze of the global indexes of reagents

The indexes specifically, μ the electronic chemical potential, η chemical hadrness, ω electrophilicity and N nucleophilicity, are summarized in Table 1 and 3D maps of the orbital HOMO and LUMO of the γ-himachalene and m-CPBA are represented in Figure 2.

The electronic chemical potential of γ-himachalene, μ=−2.56 eV, is elevated than that of m-CPBA, μ=−4.35 eV, thus signifying that the global electron density transfer (GEDT) will go from γ-himachalene towards m-CPBA.

Prediction of the regioselectivity of the reaction using local indices

It has been established that along a polar reaction with asymmetric reagents the most favorable reactive channel is that where the two-centre interaction is developed between the most electrophilic centre of the electrophile and the most nucleophilic centre of the nucleophile. The electrophilic and the nucleophilic Parr functions have been reported as derived from the changes of spin electron density attained by a GEDT process developed from the nucleophile towards the electrophile. According to the Parr functions, the most favorable single bond formation arises between the most electrophilic and nucleophilic center of the reagents, the electrostatic potential is a true character, a physical noticeable. It can be found computationally. Even as it has been employed to understand, and predicting the regioselectivity. Regions where V(r)>0 can be expected to be attracted favorably, at least initially, to negative segment of other molecules, while V(r)<0 predicts attractive interactions with positive segment. In this part, we obtain V(r) with the density functional B3LYP/6- 31(d) (Figure 2).

We represent in Figure 2, the isodensity of the HOMO molecular orbital, the electrostatic potential and the nucleophilic Parr functions of γ-himachalene.

The representation of the iso-density map of the HOMO molecular orbital of γ -himachalene (Figure 2a), shows that the HOMO orbital is highly condensed at the C7=C8 double bond, so the attack of an equivalent of m-CPBA is preferentially in this double bond.

We can observed from Figures 2b and 2c that surface map value of the bond C2=C3 and C7=C8 are -0.016 and -0.019 respectively, indicating that the double bond C7=C8 is very nucleophilic than anther double bond, the fact that this reaction was regioselective, in addition an analysis of the nucleophilicp_ k^- Parr functions at the reactive sites of γ-himachalene indicates that the C7 and C8 carbon atoms, with P_k^- value of 0.18 and 0.28 respectively, are more nucleophilically activate than the C2 and C3 carbon atoms, with a P_k^- value of 0.16 and 0.19 respectively.Consequently, the attack is preferentially effected on the double bond C7=c8 in good agreement with experimental observations.

Energetic study of the two modes of attack

Due to the asymmetry of the γ-himachalene, we have two stereoisomeric reactive channels (Scheme 3) depending on the relative position of the double bond C7=C8 (α-side and β-side). The values of the free energy and the relative free energy ones of the stationary points involved in the in-epoxidation reaction of γ-himachalene by m-CPBA are summarized in Table 2, the energy profile of this epoxidationis given in Figure 3 and the density map of the transition is given in Figure 4.

Table 2: B3LYP/6-31G(d) total (G, in a.u) and relative an energies (ΔG, in kcal mol−1) in dichloromethane of the stationary points involved in epoxidation reaction of γ-himachalene by m-CPBA. 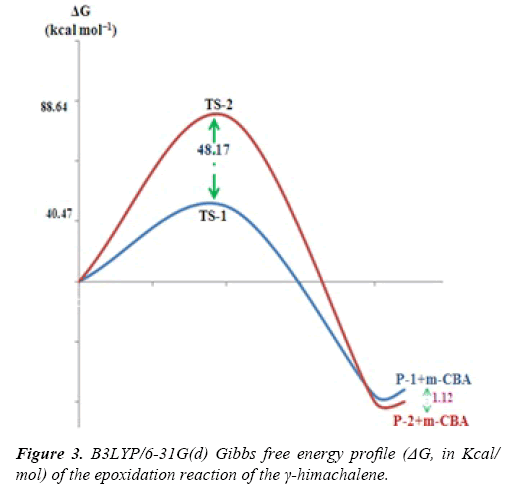 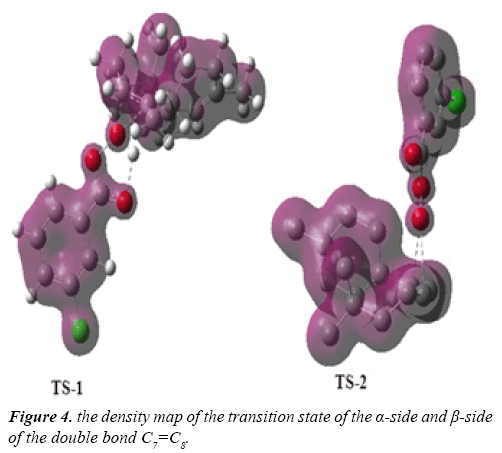 Figure 4: the density map of the transition state of the α-side and β-side of the double bond C7=C8. 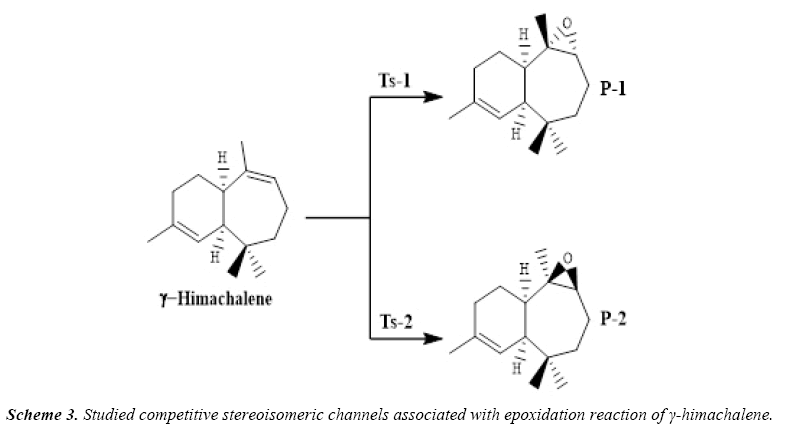 The epoxidation reaction of γ-himachalene has been investigated within the DFT calculations at the 6-31(d) computational level. The analysis of the nucleophilic Parr functions of γ-himachalene indicates that the most interaction take place between double bond C7=C8 and O2 oxygen atom of the m-CPBA. An examination of the values of the energy G and the relative energy ΔG of this epoxidation show that it takes place through a one-step mechanism. The exothermic nature of epoxidation reaction makes the formation of the two stereoisomiric products P-1 and P-2 irreversible and in conclusion α-side position (P- 1) is kinetically favored in good agreement with experimental result.