The well differentiated papillary mesothelioma of the tunica vaginalis (WDPM) revisited. A proposal of a case.

Taking a cue from a personal observation, it was revisited on the basis of the clinical-pathological features the so-called Well-Differentiated Papillary Mesothelioma (WDPM) of the tunica vaginalis testis. A review of the literature shows that this neoplasm is less than 10% of the mesothelial tumors of the paratestis, that its course is unpredictable because recurrences and metastases may occur even many years after orchiectomy, so that the tumor can be classified among those with Uncertain Malignant Potential (UMP). Overall its prognosis, initially judged entirely favorable, with the accumulation of reports. It was proved to be more severe than that of lesions with similar morphology arising in the serous membranes. Its clinical presentation is often confused with a hydrocele. The histopathological differential diagnosis, on one hand, arises with Papillary Malignant Mesothelioma, the other with a papillary carcinoma Mullerian ovarian type. The literature does not report cases of asbestos-related WDPM.

In 1957 Bàrbera and Rubino [1] signaled for the first time the e xistence of a papillary lesion in the vaginalis tunica of testis. Th e microscopic description of the lesion was the following:

“There was a thin central core of connective tissue and a considerable branching of the processes, which became progressively thinner toward the periphery. The projections of the tumor showed considerable variation in size and shape. The free surface of the papillae was covered by a single layer of cells that varied (through transitional phases) from a columnar to a flattened shape, resembling endothelium). In some areas, the lining cells were polystratified, mainly where they resembled epithelium nuclei that were relatively large and uniform in shape. No mitoses were observed. There was no evidence of a basement membrane.”

The authors reported the lesion with a mesothelial origin and called it Papillary mesothelioma of the Tunica vaginalis.

A man of 49 years old for about two months referred swelling of the left emiscrotum. For a suspect hydrocele underwent surgical eversion of the tunica vaginalis testis. Grossly, on the surface of the vaginalis a vegetanting lesionoccupying most of the excised area was observed. Some fragments were sampled for histopathological evaluation.

The specimens, formalin-fixed, paraffin-embedded were stained with hematoxylin-eosin. The microscopic evaluation showed a papillary broad-based proliferation implanted into the tunica vaginalis. The papillae were-constituted by a fibrovascular axis on which an epithelial lining single consisting of cubic, provided with a voluminous nucleus, was implanted (Figures 1 and 2) that sometimes gave a mucosal serrated appearance (Figure 1D). Mitotic activity was absent a large number of psammoma bodies in various stage of evolution were present (Figure 3). 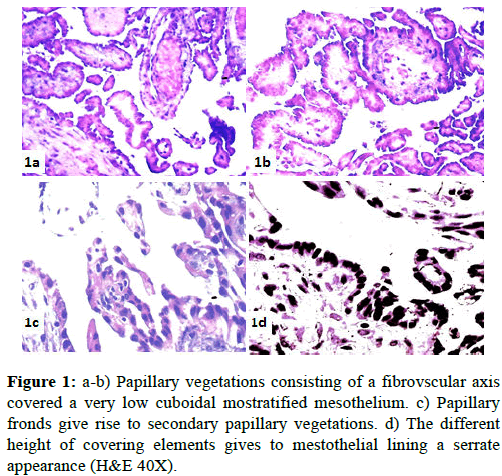 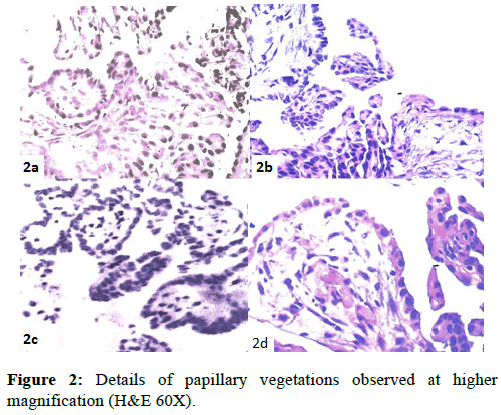 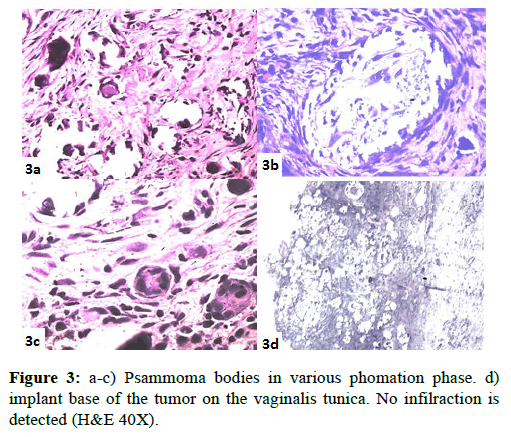 Figure 3: a-c) Psammoma bodies in various phomation phase. d) implant base of the tumor on the vaginalis tunica. No infilraction is detected (H&E 40X).

Proliferation does not seem to infiltrate the vaginal tunic (Figure 3). The immunophenotypic profile of the lining of the papillary axes expressed positivity for Calretinin, CKAE1- AE3, Vim, WT1 (Figure 4). 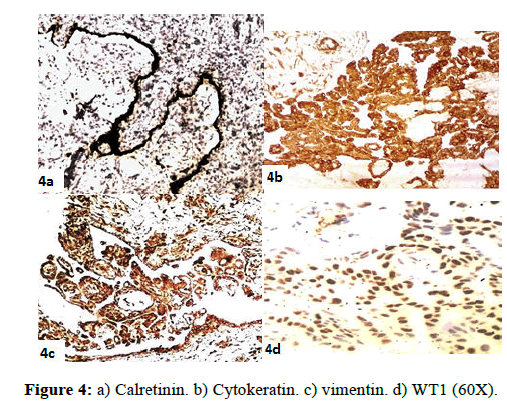 Based on the morphological characteristics and immunohistochemical profile diagnosis of “Well Differentiated Papillary Mesothelioma of Tunica Vaginalis (WDPM)” was formulated.

After the histopathological diagnosis, the patient underwent orchiectomy. 24 months after surgery he is still free from disease.

Knowing that the tunica vaginalis of the testis is an evagination of the peritoneal serosa following the descent of the testis from the abdominal cavity into the scrotum, many have speculated the possibility here they can originate malignancies to mesothelial histogenesis. In this connection it was debated the possible mesothelial origin of the so called Adenomatoid Tumor, thesis favored by Riopelle and Masson [4], while Stout favored the mesonephric origin proposed by Dixon and Moore [5].

The disagreement on origin of Adenomatoid tumor found justification from the different morphology and biological behavior of these tumors compared to those arising in the serous membranes.

In their conclusions, the authors of the original report [1] underlined the difference between their observed lesions with so called adenomatoid tumors, point out. Also, the strong morphologic analogy with the lesion reported. 76 in the Fascicle” Tumors of Retroperitoneum,, Mesentery and Peritoneum” of the first series of the Atlas of Tumor Pathology AFIP (1951) [6]., defined as "benign papillary mesothelioma found incidentally at operation" This lesion showed the morphologic characteristics of the tumor later called Welldifferentiated Papillary Mesothelioma (WDPM) which typically occurs in the peritoneum of childbearing women, which is often an incidental finding during surgery, and pursue an entirely benign course [7,8].

In the paratestis are reported all types of periodontal lesions described in the pleural and peritoneal site, so it is not easy to extrapolate the lesions of the type we encountered. In a series of 11 cases of mesothelioma [9] five were epithelial and six biphasics. Among the epithelial, three were predominantly exophytic, papillary, well differentiated. The authors conclude “an aggressive natural history with a potential for late recurrence or metastasis of even well-differentiated tumors, suggesting the need for initial aggressive surgical treatment.”

In 2010 Bisceglia [10] retrieved in the literature 223 cases of mesothelioma of paratestis. Our research in PubMed lists 175 items devoted to “mesothelioma tunica vaginalis” for a total of 252 cases. In the title of these items the word “malignant” appears 124 times.

In a study of a small series of 8 cases of WDPM [11] with follow-up to an acceptable length in only 5, having observed a morphological continuum between these forms and frankly Malignant Mesothelioma (MM), it is suggested to consider these lesions with a low malignant potential (LMP), taking into account the very late appearance of recurrences or metastases.

From the literature it is evident that these lesions have been interpreted differently over the years. Following this finding it is interesting to know how much on this subject have been reported over time, those texts that pathologists have daily on their desk working from which they take their diagnostic opinions.

In the fascicle “Tumors of Male Sex Organs” of the First Series of Atlas of Tumor Pathology-AFIP (1952) there is no mention of this type of paratestis lesions. It Is mentioned, however, the adenomatoid tumor from which they are proposed, without convinction, numerous histogenetic hypotheses [5].

In the fascicle “Tumors of Male Genital System”, of the second Series of Atlas of Tumor Pathology- AFIP (1973), in addition to Adenomatoid tumors, various types of Pararatestis mesotheliomas are reported, as purely papillary forms for which it is proposed a benign course [30].

In the fascicle Tumors of the Testis, Annexa, Spermatic Cord, and Scrotum of the third series of Tumor Atlas AFIP (1997), in the section concerning the Paratestis it states “that here the MM are predominantly epithelial, typically papillary or tubulopapillary. Occasionally they resemble the so-called welldifferentiated papillary mesothelioma of the peritoneum female”. With regard to the prognosis they are textually express “even well-differentiated papillary tumors can be clinically malignant” [31]. Also in the Fascicle Tumor of Testis and Adjacent Structures of the fourth series of Tumor Atlas AFIP the opinion of malignancy of the WDPM of paratestis has been confirmed [32].

In WHO Classification of Tumours (2004) in the chapter on Tumours of Paratesticular Structures, there is a specific section dedicated to the benign mesothelioma that includes Multicystic Mesothelioma and WDPM. For the latter, however, it is recommended the qualification of borderline and rare more aggressive cases have been reported [33].

In WHO Classification of Tumours (2016) in the chapter on Tumours of Paratesticular Structures there is a specific section devoted to WDPM. The AA draw a distinction between the purely papillary forms and those with a more complex structure (with formation of tubules), although not invasive, for which is reserved the borderline qualification. At the purely papillary, after having ascertained the complete lack of invasiveness, it can be is attributed, “with greater confidence”, a favorable prognosis [34].

From the examination of the literature appears that the WDPM tunica vaginalis represent less than 10% of mesotheliomas of paratestis and would show a substantially more aggressive behavior towards its counterpart arising in the peritoneum of childbearing women, considered quite benign. Perez Ordonez reports that “In the series of the British Testicular Panel and Registry only 4 out of 202 paratesticular neoplasms were accepted as examples of WDPM” [35].

Many studies, Daya and Caughney [36] Butnor et al. [25], Gateau-Salle et al. [37], Hoekstra et al. [38], in a total of 61 cases of WDPM in the pleura and peritoneum, in individuals of both sexes and of all ages, demonstrated substantially benign course of the neoplasia in these locations regardless of gender and age.

The main source of uncertainty lies in the difficulty to differentiate these lesions from the more differentiated forms of MM with prominent exophytic or papillary component in which; however, tubular formations and infiltrative phenomena of the paratestis structures are associated. These aspects are discriminating and should be thoroughly sought [22]. It is not unlikely that some cases of WDPM to particularly aggressive behavior were nothing but unrecognized MM.

Another challenging differential diagnosis is with the ovarian type of papillary Müllerian tumors which are reported in literature in a number of cases, not entirely irrelevant [39-52]. While the differential diagnosis of WDPM from MM is mainly based on morphologic criteria, that from papillary neoplasms of Mullerian type, ovarian-like, it is mainly based on immunohistochemistry [53].

In any cases of WDPM reported in literature asbestos exposure was indicated. Between 9 cases of mesothelioma of the tunica vaginalis reported by Meisenkno then with a prior exposure to asbestos, no case of WDPM was found (Table 2) [55].

Table 2: Differential immunophenotypic expression between the various papillary lesions of the paratestis (from amin, modified) [54].

Our case presents the clinical, morphological and immunophenotypic features of a typical WDPM of the tunica vaginalis. The literature review has shown that from the morphologic point of view nothing substantial was added to the exhaustive original description of Bàrbera and Rubino. In immunophenotypic terms the tumor does not differ from similar histotypes arising in the serous membranes.