Cervical cancer is one of the most common malignant tumors in female only second to breast cancer. It is usually caused by Human Papilloma Virus (HPV) infection [1]. Cervical cancer seriously influences women health and quality of life [2,3]. There are 530,000 new cases and 275,000 death cases every year [4]. Due to the lack of cervical cancer screening method, it has become a serious burden of society in developing country. Its incidence is still rising especially in rural areas [5]. Cervical Intraepithelial Neoplasia (CIN), as the precancerous lesion of cervical cancer, is closely related to the cervical invasive cancer [6]. It most often occurs in women aged 25 to 35. Low-level CIN can spontaneous regress, while high-level CIN has the cancerous potential. Different degrees of CIN can reflect the continuous development process of the cervical cancer. A large amount of literatures confirmed the long time needed from CIN to invasive cancer. Therefore, efficient screening for precancerous lesion and early stage cervical cancer, together with effective treatment, can significantly reduce the morbidity and mortality of cervical cancer [7].

A total of 100 cases of female received cervical cancer screening between May 2015 and Oct 2016 in Liaocheng Third People’s Hospital were enrolled. The 70 cases with abnormal pathology result by vaginoscopy were selected as observation group with mean age at 41.2 ± 7.8 (18-59 y old). The 30 cases with normal pathology confirmed by vaginoscopy with mean age at 40.9 ± 5.7 (19-57 y old) were grouped as control. This study was approved by the ethics committee and all the subjects had signed informed consent.

Pathological examination was performed on acetic acid test abnormal area and iodine test unstaining area. The cervical squamous-column junction was regularly biopsied at 3, 6, 9, and 12 points. The tissue was routinely treated by paraffin section, HE staining, and microscopic observation. The slice was read by the pathologist. The lesions were divided into normal, CIN I, CIN II, CIN III, and cervical cancer. The lesions over CIN I was considered as biopsy positive.

SPSS 16.0 software was used for data analysis. Data were presented as mean ± Standard Deviation (SD). Chi-square test was performed for comparison of the difference of categorical data and student t-test was used for difference comparison of measurement data between two groups. A significant difference was considered if P<0.05. Receiver Operating Characteristic (ROC) curve was adopted to analyse the diagnostic value of FH on cervical cancer. The sensitivity was calculated using this formula: sensitivity=number of true positive assessment/number of all positive assessment. Specificity was calculated as: specificity=number of true negative assessment/number of all negative assessment.

The clinical information was collected. No statistical significance was observed between two groups, such as age, blood pressure, heart rate, BMI, and degree of education (Table 1).

Table 2. Diagnostic analysis of FH on different degrees of CIN and cervical cancer.

HE staining showed that the normal cervix was composed of squamous epithelium and columnar epithelium, together with clear cell division and regular pattern of arrangement. The cell nucleus exhibited atypia, enlargement, and deep staining following the progress of CIN. Cervical cancer showed squamous epithelial cell hyperplasia with irregular arrangement (Figure 1). 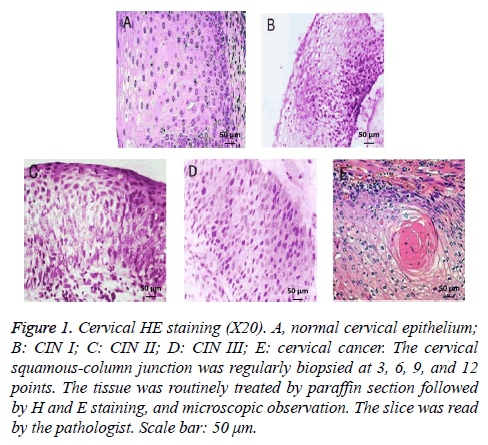 Figure 1: Cervical HE staining (X20). A, normal cervical epithelium; B: CIN I; C: CIN II; D: CIN III; E: cervical cancer. The cervical squamous-column junction was regularly biopsied at 3, 6, 9, and 12 points. The tissue was routinely treated by paraffin section followed by H and E staining, and microscopic observation. The slice was read by the pathologist. Scale bar: 50 μm. 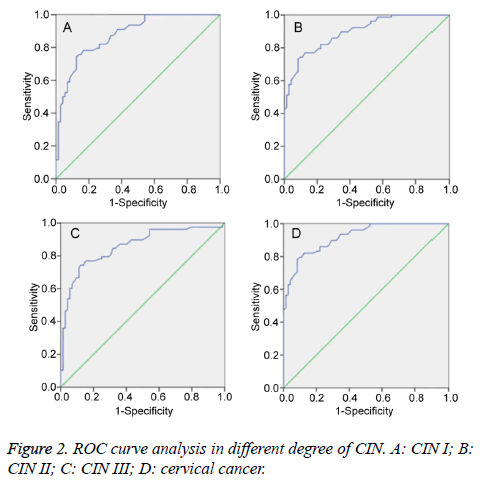 Macroscopic observation is clinical used method for screening. However, limited by technology and experience, it usually causes low sensitivity and high rate of the missed diagnosis in early stage patients. Following the progress of detection technology, this method is gradually replaced by other approaches. HPV detection has relative high sensitivity. Positive patients also exhibit higher risk of suffering from cervical cancer. HPV DNA detection has been widely used in clinic and has been treated as routine indicator in the developed countries [13,14]. However, its high cost and long period limits its popularization [15]. Colposcopy examination is also a method for cervical cancer screening, while it cannot accurately assess the lesions. Cytology and pathology examinations are needed for assistance. Cervical exfoliated cytology is the main method used to find precancerous lesions [16,17]. However, it is highly subjective and requires higher technique.

FH widely exists in each cell, especially in mitochondria. FH plays different physiological functions by binding with different proteins [18]. The occurrence of tumor is usually the outcome of multiple factors’ synergy, such as the activation of proto-oncogenes and inactivation of tumor suppressor gene [19]. Under the pathological conditions, such as abnormal DNA transcription, disruption of the tight regulation of gene expression, as well as changes of protein conformation, FH will be exuded from the cellular protein, making cell loss of homeostasis and canceration through a series of electronic reactions.

The occurrence and development of malignant tumor is usually from benign hyperplasia to precancerous lesions and metastatic carcinoma [20]. As the cell damage aggravation, proteolytic enzyme causes cell autolysis, leading to FH substance exudation. The amount of FH exudation was in direct proportion with epithelial cell malignancy. Therefore, FH could be used to quantitatively evaluate the malignant lesions. At present, FH reacts with substance to form blue sediment, whose coloring degree is used for malignancy judgement. FH is a new method for cervical cancer screening. Meanwhile, FH detection kit is featured as simple operation and low cost. Therefore, it is suitable for clinical screening of cervical cancer, especially in poverty-stricken area and primary hospital. Moreover, it was found that FH combining TCT showed relative high value for cervical lesions screening [21].

This study found that the detection sensitivity of FH was different in CIN at different stages. Following malignancy upgrading, the sensitivity was higher, resulting in lower specificity. Combining correct index and Kappa value, FH showed great diagnostic value for CIN and cervical cancer with different malignant potential. It indicated that FH detection can reach the cytological sensitivity and specificity. AUC of FH on CIN I, CIN II, CIN III, and cervical squamous cell carcinoma was 0.761, 0.825, 0.815, and 0.877, respectively. It speculated that FH detection showed great diagnostic value for CIN II, CIN III, and cervical squamous cell carcinoma. FN detection can also obtain result at the same time of gynecologic examination, which is convenient and has high application value. However, since it is only a qualitative method, other approaches are needed to evaluate the malignant degree. Considering its value, it is a feasible method for population screening.

FH is a rapid screening method featured as convenience, fast, and cheap. However, as a new approach for cervical cancer screening, FH detection can only provide the qualitative detection and primary classification for cervical lesion. It cannot classify the pathological type, thus can only be used for screening.