Objective: To investigate change of pepsinogen I (PG I), pepsinogen II (PG II) and gastrin-17 (G-17) in different gastric diseases and to determine the value of PG and G-17 in screening and diagnosis of early gastric cancer.

Gastric cancer (GC) is a serious threat to human health. It is one of the most common malignant tumors of digestive tract [1]. Although with the development of the basic medical and clinical treatment, the morbidity and mortality of gastric cancer decreased gradually, but in recent decades, the global annual increase in more than one million cases still ranked [2]. Because of non-invasive, simple and low cost, PG I, PG, and G-17 serological detection has been widely applied in many countries [3-7].

Gastrin was first discovered by Edkins in 1906, and there are many subtypes of gastrin, of which G-17 is the most abundant (about 90%). Rakic et al. found that the serum gastrin levels in patients with gastric cancer changed [8]. Ghee et al. detected Helicobacter pylori in patients with ELISA and the results showed that high level of G-17 could promote the occurrence and development of gastric cancer [9]. Zhuang et al. have shown that gastrin could promote the migration of gastric cancer cells through the β-catenin/tcf-4 pathway [10]. Kikuchi et al. showed that the high expression of G-17 and low expression of PG I and PG II could be used as the basis for early gastric cancer screening [11]. However, there are some drawbacks in each conventional technique for each sole marker has its limitation and can’t give the satisfying results. Moreover, the association between the combined detection of serum gastrin-17 plus pepsinogen and gastric cancer is still unclear.

This cross-sectional study was done in Dongtai Hospital Affiliated to Medical College of Nantong University of China during 2010-2011. A total of 192 patients with gastric diseases were selected.

The results were entered into computer using SPSS 18 statistical software and analyzed by chi-square, t-test. Receiver operating curve (ROC) analysis was used to determine the cutoffs for PG I, PG I/II ratio and G17. A p value less than 0.05 is considered as significantly different. Sensitivity and specificity of these markers to distinguish the above mentioned groups (non-atrophic gastritis, GA, and GC) were calculated. Positive Predictive Value (PPV), Negative Predictive Value (NPV), Area under Curves (AUC) and the 95% Confidence Intervals (CI) were also calculated and presented. 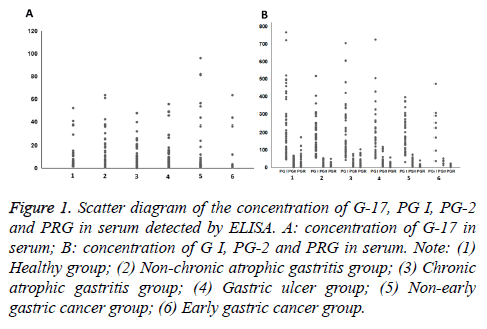 The value of G-17, PG I, PG II and PRG in the diagnosis of gastric carcinoma 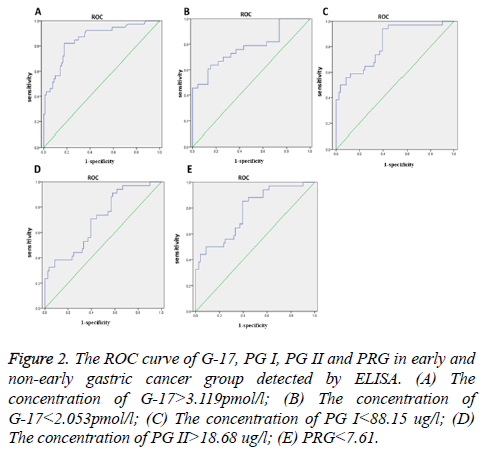 Table 4. Correlation analysis between G-17, PG I and PRG.

Table 5. The combined detection of G-17 and PRG in the diagnosis of gastric cancer complementary diagnostic value.

The aim of this study was to evaluate the accuracy of serum levels of PG and G17 as non-invasive screening methods for GC. Regarding the clinical importance of GA and GC, we mainly focused on assessing indices of validity of these markers to distinguish GA/GC patients. ELISA was used to detect the content of PG-I, PG-II and G-17 in gastric diseases patients and healthy people. The results showed that expression of G-17 and PG I all showed significant difference compared with the control group, P<0.05. Among the indexes, G-17 showed highest specification and sensitivity. However expression of PG II and the ratio of PG I/PG II (PRG) were not significantly different from the control. All G-17 and PG II showed good sensitivity and specificity in the gastric cancer group. However PRG and PG I showed lower sensitivity and specificity compared with other markers. In early gastric cancer group, G-17 demonstrated high sensibility and specificity which were significant higher than other indexes which was consistent with many studies [12]. As Edkins for the first time found gastrin, there were more and more scholars focusing on its activity [13]. Gastrin can stimulate gastric acid secretion; its expression can also be adjusted by acid feedback [14]. Among the many subtypes of gastrin, G-17 plays a significant role to regulate gastric acid secretion [15-17]. A large number of research results confirmed that hypergastrinemia is a risk factor for gastric cancer. Cao et al. an observational case-control study showed that serum G-17 was higher than the control group in gastric cancer patients [18]. Sun suggested the cut-off points of G-17 was 10.7 pmol/l, sensitivity and specificity were 50% and 83% out of a large sample of research data [19]. Japanese researchers found that the function of gastric mucosa can be reflected by the expression of PG in serum [20]. The serum PG can be divided into two subtypes: PG-I and PG-II, which belongs to the aspartic protease precursor, consisting of 375 amino acids, 42 kDa molecular weight. Miki et al. suggested when PG I ≤ 70 ng/mL or PRG ≤ 3, the diagnostic sensitivity was 77% and the false positive rate was 27%, the positive predictive value between 0.77% and 1.25%, the negative predictive value between 99.08% and 99.90% [21]. Finally we study the combined detection of G-17 and PRG value in diagnosis of gastric cancer. Spearman rank correlation method showed that the serum levels between G-17 and PRG is small (P>0.05). All patients with gastric carcinoma, combined detection results of the three indexes showed that G-17 and PRG combined detection of diagnostic sensitivity can be increased to 96.2%. There are some reports on sign gesture recognition and we need to study further [22-26]. However, the results due to the smaller sample size and there are certain limitations, but the combined detection of G-17 and PRG still has the potential to be a reliable indicator of detection of gastric cancer.