The successful outcome of pregnancy with huge lower segment fibroid.

Fibroids are one of the most common benign smooth muscle tumors of the uterus. The reported prevalence of uterine fibroids in pregnancy varies between 1.6 and 10.7 percent. Pregnant women with leiomyoma are at increased risk for cesarean delivery, breech presentation, malposition, preterm delivery, placenta previa, and severe postpartum hemorrhage. Increasing size of fibroid was associated with greater rates of hemorrhage, increased estimated blood loss, and higher rates of admissions for fibroid-related pain. The first line of therapy of uterine fibroids coexisting with pregnancy is conservative, but in rare circumstances, surgical intervention and myomectomy may be required. We decided to present this case because of the successful outcome of pregnancy with huge lower segment fibroid without antenatal Myomectomy and successful Myomectomy 4 months after delivery. Our patient had no complications during pregnancy. Huge fibroid in our patient was not associated with greater rates of hemorrhage and blood transfusion and higher rates of admissions for fibroid-related pain. Nevertheless, she eventually had a preterm delivery at 32 weeks. Therefore, it is better to check the presence of uterine fibroids with ultrasound before attempting to conceive, and if there are multiple or large fibroids, to avoid the possibility of complications and premature birth, and to prevention need for various ultrasounds during pregnancy, perform myomectomy before getting pregnant if necessary, depending on the size or symptoms of the myoma.

Fibroids are one of the most common benign smooth muscle tumors of the uterus [1]. The reported prevalence of uterine fibroids in pregnancy varies between 1.6 and 10.7%, depending upon the trimester of assessment (first versus second) and the size threshold for reporting presence of a fibroid (eg, range ≥ 0.5 to >3 cm) [2,3].

Uterine fibroids are usually asymptomatic during pregnancy Symptoms include pain, pelvic pressure, and/or vaginal bleeding in symptomatic women. Pain is the most common symptom [4]. Myomas with volumes greater than 200 cm show a higher rate of complications than those with volumes equal to or less than 100 cm [5].

Increasing size of fibroid was associated with greater rates of hemorrhage, increased estimated blood loss, and higher rates of admissions for fibroid-related pain [6]. Pain and premature labor correlated positively with the size of the largest myoma [7]. Women with large uterine fibroids (>5 cm) in pregnancy are at significantly increased risk for delivery at an earlier gestational age compared to women with small or no fibroids, as well as obstetric complications including excess blood loss and increased frequency of postpartum blood transfusion. Short cervix, preterm premature rupture of membranes, and preterm delivery are also significantly more frequent in the large fibroid group [8].

Management of leiomyomas in pregnancy is conservative and limited, when it is necessary, to medical therapy. but in rare circumstances surgical intervention and myomectomy may be required. The main indications for myomectomy during pregnancy are: the torsion of pedunculated fibroid, fibroid necrosis and consequent inflammatory peritoneal reaction; rapid growth of myoma; large fibroids located in the lower uterine segment or causing deformation of the placentation site; large fibroid causing compression phenomena with intestinal obstruction or sub-obstruction. The importance of maternal and fetal welfare thus requires a careful evaluation of several factors that, varying from case to case, lead the authors to choose the most appropriate management [9]. Myomectomy during pregnancy appears as a safe procedure in cases of symptomatic uterine fibroids not responding to conservative management and therefore it may be considered, following appropriate counselling regarding the associated risks [10].

Though rarely, rapidly growing and very large myomas can be an indication for myomectomy during the second trimester of pregnancy, because of the limited space for fetus development. Laparotomic myomectomy should be preferred over laparoscopic myomectomy in cases of very large myomas, due to prolonged operative time, inapplicability of in-bag morcellation and related risks of dissemination of a leiomyoma or leiomyosarcoma [11,12]. Also The Cesarean Myomectomy is associated with clinical insignificant increase in operative time, blood loss and hospital stay, especially with multiple and large size myomas Cesarean Myomectomy should be preferred over Cesarean section alone especially by experienced surgeons with appropriate haemostatic techniques and tertiary care centres [13].

We decided to present this case because of the successful outcome of pregnancy and cesarean section with a huge lower segment fibroid (about 25×30 cm) without increased risks of postpartum hemorrhage and blood transfusion and without antenatal and cesarean Myomectomy.

A 36 years old woman, Gravid:3, para:2, Live:1, Death :1 (previous two cesarean section) with gestational age:32 weeks and 5 days, was referred to our hospital with a vast lower segment uterine fibroid and third cesarean section, with a chief complaint of labor pain from a few hours ago. The patient had a past medical history of hypertension since her first pregnancy six years ago, which terminated her pregnancy at 34 W because of pre-eclampsia. And after delivery, due to persistent high blood pressure, she took two tablets of amlodipine 5 mg daily. The patient’s second pregnancy was three years ago, which ended at 28 weeks for unknown reasons, and the infant died a week later. The patient didn’t mention any myoma in two previous two cesarean section.

The first ultrasound examination in the 8th week of pregnancy had shown huge non-measurable fibroids on the posterior wall of the uterus. On the second sonography, at 11th weeks, a very large myoma of about 18-19 cm was seen. Ultrasound at 15 weeks also showed subserosal peduncle fibroid with dimensions of 180×119×175 cm in the lower segment of the uterus. At 17 weeks, its size was estimated at 161×131 cm, which caused the fetus to move upward and straight from the uterine. In the last ultrasound at 29 weeks of pregnancy, a large myoma was seen in the lower segment of the uterine body measured 172×170 cm.

According to the mentioned ultrasounds, the myoma did not change in size during the pregnancy. Due to the patient's history of preterm delivery and high blood pressure, aspirin 80 mg daily was prescript since preconception. Furthermore, the patient was consuming enoxaparin 40 mg for three months and antenatal corticosteroids for lung maturity administrated two days ago.

The patient had stable vital signs at admission to the ward. BP=135/80 PR=78 RR=20 T=37. The Cervical dilation was 2 cm, and cervical effacement was 20%. On examination of the abdomen, a large fibroid surrounded the entire abdomen (25 cm × 35 cm) (Figure 1), and there was a Pfannenstiel scar on the abdomen. On ultrasound, the cervical length was 20 mm. 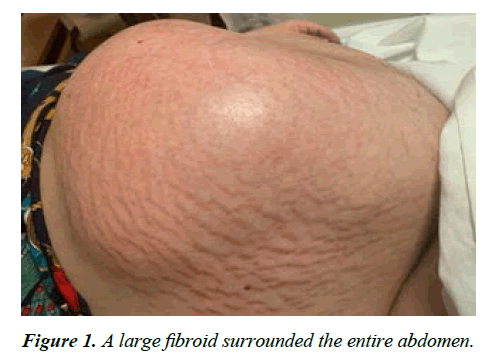 The uterine contractions was moderate force and after hydration and rest to the mother, contractions became more regular with every 4 minutes interval and 40 seconds duration and therefore with the possibility of uterine rupture, the decision was made to have an emergency cesarean section. Before the operation, Complete Blood Count and liver function tests were requested, where Hemoglobin=17.3, platelets=176, and Liver function tests was normal.

Pre -operation four-unit packed red blood cells was reserved. The patient was hydrated with 1000 cc normal saline serum, and high-risk consent was informed with the arrangement of multiple blood products and the chance of caesarean hysterectomy. On top of that, the possibility of ICU admission for the mother and NICU admission for the fetus was consulted with the mother.

After prepping, draping, and catheterizing the bladder, under spinal anesthesia, a midline incision was performed over the skin from pubis until supra umbilical space. After inserting the abdomen there was a huge mass from the xiyfoid until deep into the pelvic cavity was lateral extensions to both sides of abdominal cavity therefor huge mass was seen, we looked for the uterus to find well the baby is inside the uterus. After finding the round ligament attachment to the abdominal wall, we know that the uterus was located anterior to the myoma, and the myoma was completely posterior to the uterine cavity and accuses to the baby was not very difficult.

First, the bladder flap was lowered as far as possible, and Kerr incision was made on uterine lower segment. Which was cut higher due to lack of access to the fetus? (Figure 2) Shows new-born with 7/8 Apgar and footling breech, which immediately require to be transferred to NICU and a presence of a Neonatologist. 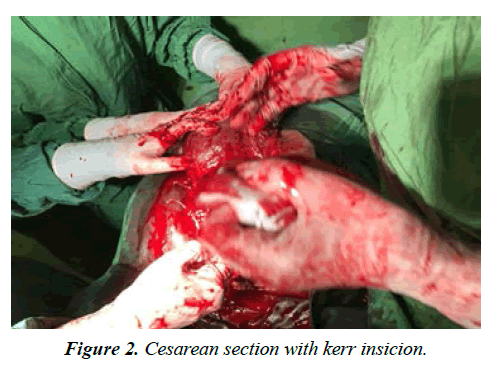 After the delivery, the placenta and the membrane were removed, and the uterus was courage with two gases. The uterus was not removed from the abdominal cavity because of a large myoma, and the incision of the uterus was repaired. A hemovac drain was inserted into the right side of the patient’s abdomen. Hemorrhage was within manageable limits, a cesarean hysterectomy was avoided, and other layers of the abdominal wall were repaired anatomically.

Finally, the patient expected postoperative recovery was successful and did not need a blood transfusion.

An ultrasound one month after delivery showed a very large myoma extending from the pelvis to the epigastrium and from the patient's right side to the left side. Due to the enormous size of the fibroid, size measurement was not possible. Moreover, moderate hydro nephrosis appeared in the patient's right kidney.

The patient underwent a successful Myomectomy after four months (Figure 3A and Figure 3B). 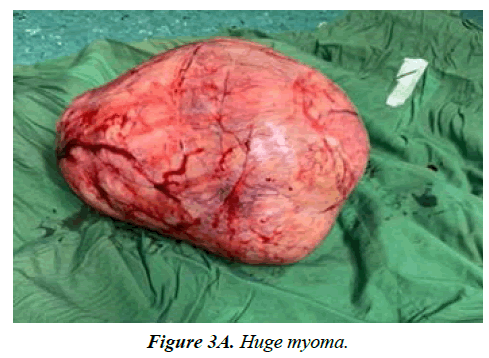 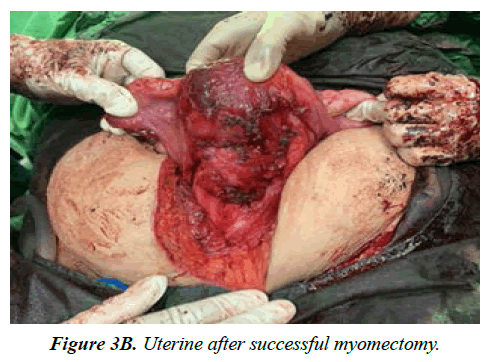 Figure 3b: Uterine after successful myomectomy.

Although most women with fibroids have uneventful pregnancies, the weight of evidence in the literature suggests that uterine fibroids are associated with an increased rate of spontaneous miscarriage, preterm labor, placenta abruption, malpresentation, labor dystocia, cesarean delivery, and postpartum hemorrhage. During pregnancy pain is the most common problem of fibroids. The symptoms can usually be controlled by conservative treatment, but may require definitive surgical resection in rare instances. In our case, no significant size change was observed in the ultrasounds performed from the 8th to 29th week, and the patient had no complications except preterm delivery.

Most of the fibroids in pregnancy are asymptomatic but may be associated with complications affecting pregnancy lag and labor depending on their size and location. Therefore, pregnancy has to be cautiously screened in the antenatal period, through regular follow-up, and any adverse obstetric complications detected might improve the outcomes. The use of ultrasound has simplified the diagnosis and management of fibroid in pregnancy [18]. In our case, the patient was followed up regularly with ultrasound and examined for size and complications.

The uterine fibroids first line of management in pregnancy is conservative. However, in the presence of complications, good selection criteria need to be applied to individualize patient care for optimal results. Caesarean Myomectomy can be performed in carefully selected cases. Our patient had responded well to conservative management. Thus, antepartum Myomectomy was not performed. Because of the emergency cesarean section due to uterine contractions and huge fibroid, and our patient was not a candidate for cesarean Myomectomy. The decision was made to perform Myomectomy at a distance from the cesarean section ،to decrease complications and risk of atony and postpartum hemorrhage.

In this case, the patient had a huge uterine fibroid, which is evaluated regularly with ultrasound from the beginning of pregnancy to delivery. Myomectomy was not performed due to being asymptomatic and no complications during pregnancy. However, the patient eventually had a preterm delivery at 32 weeks. Therefore, it is better to check the presence of uterine fibroids with ultrasound before attempting to conceive, and if there are multiple or large fibroids, to avoid the possibility of complications and premature birth, and to prevention need for various ultrasounds during pregnancy, perform myomectomy before getting pregnant if necessary, depending on the size or symptoms of the myoma.