The study of sclareol in inhibiting proliferation of osteosarcoma cells by apoptotic induction and loss of mitochondrial membrane potential.

Objective: Sclareol (sclacol) is one organic compound extracted from sage clary plants. Recent study has shown its anti-tumor effects against breast cancer, gastric carcinoma, osteosarcoma and colorectal cancer. Its detailed mechanisms in inhibiting tumor growth, however, remained unknown. This study thus observed the effect of sclareol on the proliferation of osteosarcoma cells, in an attempt to investigate the role of sclarcol on osteosarcoma growth. Patients and methods: MG63 osteosarcoma cell was treated by different concentration of sclarcol. CCK8 assay was used to test its effect on cell proliferation. LC50 value was then determined to obtain optimal treatment dosage. MG63 cells were then divided into control and drug treated group, and were tested for apoptosis using flow cytometry. Rhodamine 123 was used to label mitochondrial membrane potential, which was measured by laser confocal microscope. Results: CCK8 test results showed that sclareol can inhibit MG63 cell proliferation, with an LC50 value at 11.0 μM. Flow cytometry results showed the apoptotic cell ratio at 13.8%, 24.1% and 37.3% after applying 2.0 μM, 4.0 μM and 8.0 μM sclareol. Compared to control group, sclareol significantly depressed mitochondrial membrane potential of MG63 cells. Conclusion: Sclareol can inhibit the proliferation of MG63 cells, and induce cell apoptosis and decrease mitochondrial membrane potential. These results suggested the inhibition of osteosarcoma cells by sclareol via both apoptosis induction and decreasing mitochondrial membrane potential.

Osteosarcoma is one primary malignant bone tumor commonly seen in children or teenagers, and occupies about 5% of total childhood tumors [1]. Osteosarcoma is commonly occurred in epiphysis end of long bones such as femora and humeral, and has characteristics such as high malignancy and invasiveness [2]. With abundant blood flow at epiphysis, osteosarcoma cell is predisposed to have distal metastasis via blood circulation, causing treatment difficulty and unfavorable prognosis, and bringing heavy burdens for public health [3].

Recent study has revealed certain anti-tumor effect of sclareol in inhibiting tumor growth such as osteosarcoma, breast cancer, gastric cancer and colorectal carcinoma [4,5]. Sclareol, also named as sclareol, is one di-tert-alcohol firstly extracted from sage clary plants in 1982 and later in other plants [6]. Study has found its LD50 larger than 5000 mg/kg in mice and rabbits, making it one low toxicity compound [7]. Meanwhile, active compound using sclareol as material has multiple functions including anti-bacteria, anti-spasmodic and anti-viral, making it one important drug material for synthesizing various drugs and pesticides [8].

Sclareol has high anti-bacterial activity against Staphylococcus aureus, Staphylococcus pidermidis and E. coli [9]. It also had certain anti-inflammation effects besides anti- bacterial functions [10]. Using sclareol as the basal material, 13-sclareol hydrochloride compound has been synthesized with certain anti-spasmodic functions [11]. Sclareol and its derivatives had cytotoxicity on multiple tumor cells and can inhibit tumor growth [12].

DMEM medium, fetal bovine serum (FBS) and trypsin were purchased from Gibco (US). DMSO, sclareol and PI dyes were produced by Sigma (US). CCK8 test kit was obtained from Toyobo (Japan). Culture dish was a product of Corning (US). CO2 cell incubator was produced by Thermo (US). Microplate reader was obtained from Bio-tek (US). Flow cytometry equipment was provided by BD Biosciences (US).

MG63 osteosarcoma cells were purchased from Shanghai Cell Biology Institute, Chinese Academy of Sciences. Cells were kept in DMEM medium containing 10% FBS, and were kept in a humidified chamber with 5% CO2 at 37°C.

At different time points (24 h, 48 h and 72 h, the medium was removed to rinse cells using PBS. 0.1 mL 10% CCK8 working solution was added into each well for further 2 h incubation. Absorbance value of each well was measured in a microplate reader at 450 nm wavelength. Using concentration of sclareol as the horizontal axis, the growth curve of MG63 cells was plotted using absorbance value as the vertical axis. The LC50 value of sclareol was deduced on the growth curve.

MG63 cells were treated with DMSO (control) or sclareol. After 48 h, the medium was removed, following by the digestion by 0.25% trypsin. Cells were rinsed in DMEM to prepare single cell suspensions, which were centrifuged at 1000 g for 5 min. PBS was then added to rinse cells again for further centrifugation. Supernatants were removed with adding 0.2 mL blocking buffer. The mixture was then incubated at room temperature for 15 min. 0.5 mL buffer solution was then added, followed by centrifugation. 0.2 mL annexin V dye was added, mixed and incubated for 10 min. After rinsing and washing by centrifugation, PI dye was added. The mixture was then loaded for flow cytometry to detect apoptosis.

Cells were digested in 0.25% trypsin, and were rinsed to prepare single cell suspension, which was centrifuged at 1000 g for 5 min. DMEM medium was then added to prepare single cell suspension (1 × 106 per mL), which was then mixed with 10 μL Rhodamine 123 dye. Cells were incubated in a humidified chamber with 5% CO2 at 37°C for 1 h. 0.1 mL cell suspensions were added on glass slide to observe fluorescence intensity (FI) under a laser confocal microscope at 488 nm/590 nm wavelength for the quantification of ΔΨ. 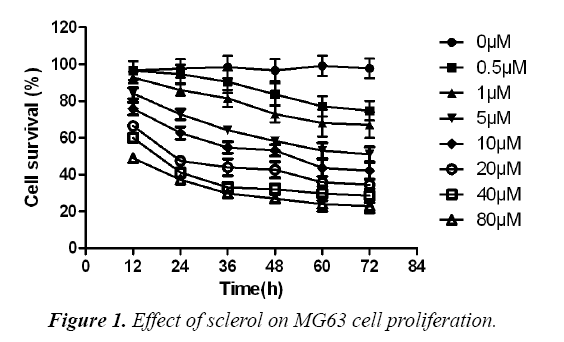 To study the mechanism of sclareol on inhibiting MG63 cell proliferation, we further investigated the effect of sclareol on MG63 cell apoptosis. We divided cells into DMSO group and treatment group, which were further sub-divided into 2.0 μM, 4.0 μM and 8.0 μM. 48 h after treatment, flow cytometry was used to measure cell apoptosis. As shown in, sclareol may induce MG63 cell apoptosis, with apoptotic cell ratio at 13.8%, 24.1% and 37.3% for 2.0 μM, 4.0 μM and 8.0 μM of sclareol, respectively. DMSO-treated cells, however, had apoptotic cell ratio at 5.1%. Significant difference existed between control and experimental group (F=22.65, p<0.05) (Figure 2).

Rhodamine 123 (Rh123) is one cation florescent dye that is dependent on mitochondrial membrane potential (ΔΨ). By observing the florescent intensity emitted by Rh123, one can determine the alternation of ΔΨ and apoptosis. Therefore we utilized laser confocal microscope to observe the change of ΔΨ. We divided cells into DMSO group and treatment group, which were further sub-divided into 2.0 μM, 4.0 μM and 8.0 μM. 12 h after treatment, cells were observed under microscope. As shown in, MG63 cells had significantly depressed ΔΨ in sclareol treated cells. There was a negative correlation between sclareol concentration and ΔΨ, indicating that sclareol could decrease mitochondrial membrane potential of MG63 cells (Figure 3). 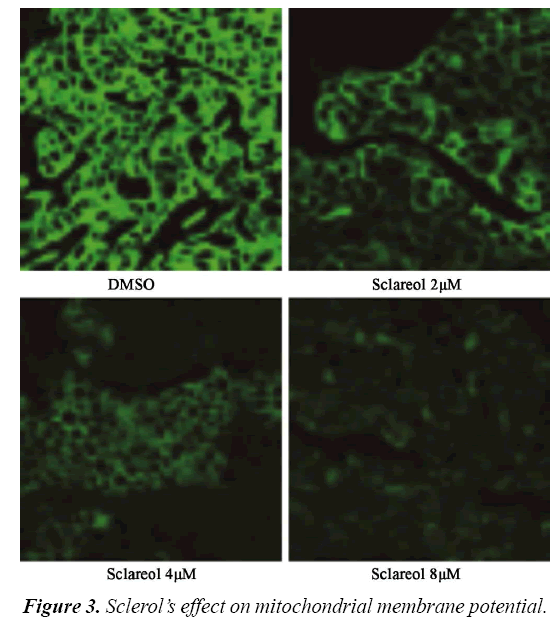 Sclareol is one di-tert-alcohol firstly extracted from sage clary plants, which are mainly distributed in China and Mediterranean regions [13]. Traditionally it was used to produce perfumes and additives and also as materials for drug development [14]. Previous reports indicated the anti- tumor activity of sclareol as it showed inhibitory effects on osteosarcoma, breast cancer, gastric carcinoma and colorectal carcinoma, but leaving its mechanism largely unknown [15]. To study the anti-tumor activity of sclareol, we selected MG63 osteosarcoma cell as the model, on which the effect of sclareol on cell viability was observed using CCK8 assay. All cells were divided into blank control, solvent control and experimental group.

Test results showed decreased proliferation ability of cells after treating using sclareol. Within certain dosage range, there was a negative correlation between sclareol concentration and cell viability. Under the same concentration of drugs, the proliferation ability of MG63 cell was decreased with elongated treatment. To further study the mechanism underlying sclareol inhibition on osteosarcoma cells, we divided cells in to DMSO and sclareol group, on which flow cytometry was used to test cell apoptosis. Our results showed significantly elevated apoptotic cell ratio in treatment group comparing to DMSO treated cells (p<0.05). With higher concentration of sclareol, the apoptotic percentage of MG63 cells was gradually increased, supporting the induction of osteosarcoma cell apoptosis by sclareol.

The authors declare no competing financial or commercial interests in this manuscript.