Insulin-like growth factors (IGFs) and IGF-binding proteins (IGFBPs) have been reported to play an important role in tumor proliferation. This study aimed to investigate the validity of measuring IGF-I in the serum of children with acute lymphoblastic leukemia (ALL) as additional markers in diagnosis and follow-up of the disease. IGF-I was determined in the sera of 33 ALL patients at time of diagnosis and after an intensification phase of chemotherapy (IPC) that lasts about 6 months as well as in 21 healthy children as a control group using enzyme-linked immunosorbent assay (ELISA) technique. At time of diagnosis, serum IGF-I was significantly lower than those in the control group. After IPC, serum IGF-I returned to their normal levels. In conclusion, the changes in IGF-I could be useful to support diagnosis and follow-up of children with ALL.

The IGF-I is a 70-amino-acid peptide that is mainly produced by the liver in response to growth hormone (GH) stimulation [2], but like IGF-II can be synthesized by almost any tissue in the body. Serum levels of IGF-I are age dependent, increasing slowly from birth to puberty, at which they peak and thereafter decline with age [3]. Hemopoietic progenitors and mature blood cells have been shown to produce GH and IGF-I and to express receptors for these peptides. The GH and IGF-I may act independently on these cells or, more likely, in a synergistic manner with primary hemopoietic cytokines. Their receptors are also present on freshly explanted leukemic cells and leukemic cell lines [4]. The mitogenic effects of both IGFs are mediated primarily though the IGF-IR [5], with growth during the embryonic and the fetal stages principally regulated by IGF-II and postnatally by IGF-I, which has higher affinity for the IGF-IR.

IGF-I are affected by growth hormone, but the former peptide is the more sensitive to growth hormone. Levels of circulating IGF-I in humans are low at birth, rise progressively during childhood and peak during puberty, so changes of IGF-I level are relatively small at (3-8) period of age [7].

Insulin-like growth factor-I (IGF-I) is known to be a major growth factor with effects on various cell types, (IGF-I is involved in cell proliferation and apoptosis) including hematopoietic cells, researchers lately found out that in T-cell and B-cell acute lymphoblastic leukemia (T-ALL) (B-ALL), malignant growth is driven by insulin-like growth factor I (IGF-I) which plays the key role, there is an oversupply of IGF-I receptors in T-ALL and B-ALL. The leukemia cells therefore become particularly sensitive to IGF-I signals. When the researchers blocked the IGF-I receptors using specific inhibitors or turned off the gene coding for the receptor, the blood cancer cells ceased to grow. This worked both in murine cancer cells and in human leukemia cells [11,12].

However, blockage of the IGF-I signal not only stopped cancer cell growth. Moreover, the dangerous cancer stem cells lost their capability of self-renewal because, leukemia stem cells are particularly dependent on strong IGF-I signals [12].

Treatment of children with acute lymphocytic leukemia (ALL)

The main treatment for children with acute lymphocytic leukemia (ALL) is chemotherapy, which is usually divided into 5 phases:

When leukemia is diagnosed, there are usually about 100 billion leukemia cells in the body. Killing 99.9% of these leukemia cells during the 1 month induction treatment is enough to achieve a remission usually; all of the following drugs are given during induction:

Daunorubicin (DAUN), IV; this medicine is only used for children with high-risk ALL

But it still leaves about 100 million leukemia cells in the body. These also must be destroyed. An intensive 1 to 2 month program of consolidation, some of the following drugs are given during this stage vincristine (VCR), IV

Then Interim Maintenance Phase: As with the previous phase, interim maintenance aims to destroy any leukemic cells left in your child’s marrow or blood. This phase lasts about 2 month.

Children may take the following medicines:

Methotrexate (MTX), IV and IT

Intrathecal Methotrexate (IT MTX), IT

This study included 33 children with newly diagnosed ALL (18 boys and 15 girls) with ages ranging from 36 months to 8 years that were selected from the Children Hospital, Damascus University. The study lasted from February 2014 to January 2016. The patients were investigated at two different points: At time of diagnosis and after the intensive phase of chemotherapy (IPC) that lasts for about 6 months.

The study also included 21 healthy children (13 boys and 8 girls) with ages ranging from 3 years to 8 years as a control group. Informed consent was obtained from the participating patients or their parents in adherence with the guidelines of the World Health Organization (WHO).

Accordingly, the individuals enrolled on the present study were divided into the following groups: (1) control group, (2) ALL groups (at diagnosis) and (3) ALL groups (after IPC). Blood samples were collected from each and sera were separated and stored at - 80°C until analysis.

All the groups were subjected to the following investigations: IGF-I was performed after acid ethanol extraction, by enzyme amplified sensitivity immunoassay (EASIA) technique (BioVendor Company).

Samples were taken from sick children who have been newly diagnosed with acute lymphocytic leukemia before starting any chemical treatment.

• Patients with cancer or other tumors accompaniment to leukemia.

• Patient who has previous injury of acute lymphatic leukemia blood.

• Patients have Dwarfism, Gigantism or have been treated with growth hormone.

Results presented in Table 1 showed that at diagnosis, serum levels of IGF-I, in ALL patients were markedly lower than those in the control values. After IPC, they were increased as compared with their corresponding values before treatment. But there are four patients didn’t response to treatment and the IGF-I still low at their serum (Tables 1 and 2).

Table 1. Patient details at diagnosis, serum levels of IGF-I, in ALL patients were markedly lower than those in the control values.

Table 2. IGF-I ratio in ALL patients before and after treatment and in the control group.

Cut-off values of the studied IGF-I

To select suitable cutoff values for IGF-I sensitivity and specificity were calculated for different values and displayed as ROC curve. The optimum was defined as the point where the sum of sensitivity was maximal, and was confirmed by cox regression with relative risk as the criterion. With this procedure, cutoff points of 52.50 ng/mL (sensitivity 93.6%, specificity 71.3%). That’s mean patient with IGF-I concentrate higher than 52.50 ng/mL are Responding to treatment (good signal), whereas patient with IGF-I concentrate lower than 52.50 ng/mL aren’t Responding to treatment (bad signal) (Figure 2). 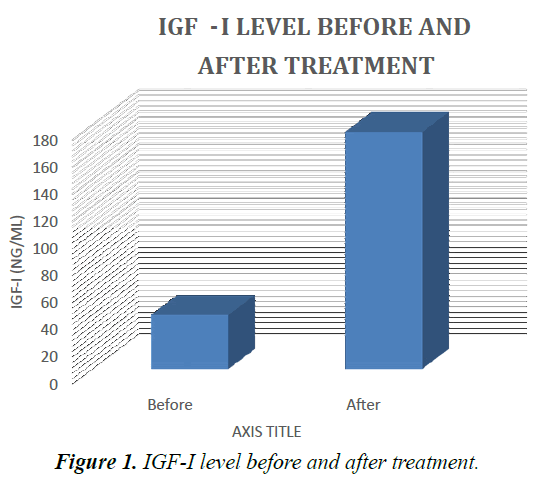 Figure 1. IGF-I level before and after treatment. 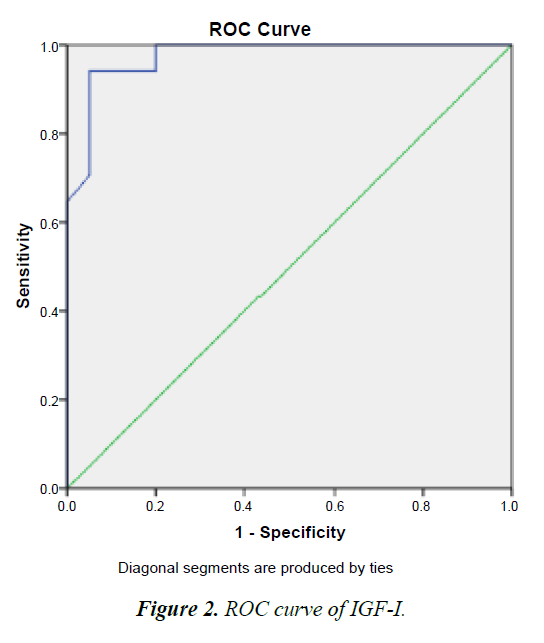 The results of the present study showed that at diagnosis IGF-I was significantly decrease in the studied ALL patients as compared with the control group. After the end of IPC, there was an improvement of the studied parameter as indicated by the increase in serum level of IGF-I.

These results were in accordance with previous [14-21].

The proliferation of malignant lymphoblast occurs in the presence of decreased serum levels of IGF-I, and overexpression of IGF-1R which is recognized as a major promoter of tumor progression and is commonly found in a number of different cancers [11].

Over-expression of IGF-1R in bone marrow attract most of the serum IGF-I and reduce its level at serum. On the other hand researches reported that IGFBP-3 proteolysis is increased in serum samples of children with acute leukemia, leading to decreased formation or stability of the IGF-IGFBP-3-acid labile subunit. The disturbance in the GH–IGF axis impaired production of IGFs and their binding proteins by the liver [19,20].

There were significant changes in IGF-I between healthy children and those with ALL at the time of diagnosis. After IPC, there were significant improvements in IGF-I in the studied cases, which suggest it’s important as a predictive marker in treatment monitoring. IGF-I could be additional markers to support diagnosis and follow-up of ALL patients.