Objective: Insulin resistance is a high risk factor of Endometrial Carcinoma (EC). Insulin like Growth Factor Binding Protein-Related Protein 1 (IGFBP-rP1) could lead to insulin resistance due to its high affinity with insulin. The role of IGFBP-rP1 in EC is still unclear.

Method: The IGFBP-rP1 was overexpressed at the cellular level first, and then its effect on the growth of endometrial carcinoma cells was observed and its regulatory mechanism was investigated.

Results: Our study showed that IGFBP-rP1 upregulation decreased the proliferation of cells and the proportion of S+G2/M phase, but increased the apoptosis of human endometrial cancer cells HEC-1A. The expression of p-ERK1/2 was inhibited, while the concentration of rhIGFBP-rP1 increased. Nevertheless, IGFBP-rP1 was highly expressed in EC tissues. Further examination revealed that the DNA hypomethylation in the promoter region of IGFBP-rP1 was correlated with the high mRNA and protein expression levels of IGFBP-rP1 in EC tissues.

Endometrial Carcinoma (EC) is one of the three most malignant tumors in female reproductive duct, accounting for 7% of female malignant tumor. According to the National Cancer Institute (NCI), the incidence of EC is becoming the highest in the malignant tumors of female reproductive duct [1]. Epidemiological studies have shown that metabolic syndrome, which is manifested as obesity, hypertension and diabetes, is a high risk factor to EC [2]. These high risk factors have a common pathophysiological basis, i.e. insulin resistance and the following hyperinsulinemia [3].

IGFBP-rP1 (Insulin-like Growth Factor Binding Proteinrelated Protein 1) is one type of proteins in IGFBPs (insulinlike growth factor binding protein system) which have relatively low binding with IGF (Insulin-like Growth Factor) [4]. Recent studies have shown that IGFBP-rP1 is not only involved in the formation of insulin resistance, but also plays a role in cell growth, aging and tumor formation. It is reported that IGFBP-rP1 can inhibit the growth of tumor cells such as breast cancer, lung cancer, malignant melanoma and colon cancer, and promote the apoptosis of tumor cells [5-8]. The use of IGFBP-rP1 in the transplant model of mice can slow tumor growth and inhibit tumor metastasis [7,9]. IGFBP-rP1 can also alter chemotherapeutic drug sensitivity [6,10]. Furthermore, IGFBP-rP1 exhibited low expression in breast cancer [11], colon cancer [12], prostate cancer [13] and other tumor tissue, indicating that IGFBP-rP1 might play a role as a tumor suppressor gene. Many studies show that IGFBP-rP1 inhibiting tumor might be related to the regulation of BRAF/MEK/ERK pathway. However, the role of IGFBP-rP1 in EC is still unclear. Previous studies have shown that low levels of IGFBP-rP1 and hyperinsulinemia in serum of patients with EC are risk factors for the formation of EC [14], and an improvement in insulin resistance or metabolic abnormalities can reduce the risk of EC. Therefore, IGFBP-rP1 may play a role in the formation of EC, similar to its role in other tumors, implying a potential therapeutic value for the anti-tumor treatment in EC.

In this study, we up-regulated IGFBP-rP1 at the cellular level first, and then observed its effect on the growth of endometrial carcinoma cells and investigated its regulatory mechanism. Finally, we confirmed the effect of IGFBP-rP1 on the growth regulation of EC on the tissue level.

Cells were plated in a 6-well plate culture flask with 3 × 105 cells per well. After 20 h, Lipo2000 (Invitrogen, USA) was used as a transfection reagent according to the manufacturer’s instructions. The cells transferred with pEX-2-IGFBP7 or pEX-2-Empty were named as the experiment and negative control group, respectively. After 24 h from transfection, the experiment group, negative control group and their parental were collected to undergo cell proliferation, cell cycle and cell apoptosis analysis, respectively. After 36 h or 72 h from transfection, the three groups were collected to perform RNA or protein extraction, respectively.

Total RNA was isolated from cells and tissues using the TRIzol reagent (Cwbiotech, China) according to the manufacturer’s protocol. cDNA was synthesized by First Strand cDNA Synthesis Kit (Cwbiotech, China) according to the description of instruction. Real-time PCR was performed with SYBR Premix Ex TaqTM (TOYOBO, Japan) as the manufacturer’s protocol. The following protocol was used for real-time PCR amplification: preincubated at 95°C for 60 s followed by 40 cycles of 95°C for 15 s and 60°C for 60 s. All the primers used in real-time PCR were described as follows: IGFBP-rP1 (forward primer 5’-CAGGTGTACTTGAGCTGTGAGG-3’, reverse primer 5’-CATGTAAGGCATCAACCACTGT-3’); β- actin (forward primer 5’-TGACGTGGACATCCGCAAAG-3’, reverse primer: 5’-CAGGAAGGTGGACAGCGAGG -3’). Data were analysed by the 2-DDCt method.

For cell proliferation assay, cells were collected and resuspended with Dulbecco’s modified eagle medium, seeded at 8 × 103 cells/well in 96-well plates and cultured in 100 μl Dulbecco’s modified eagle medium. The 10 μl cell counting kit-8 (CCK-8) was added to each well after being incubated for the indicated times (12, 24, 48 and 72 h) and then the samples were incubated at 37°C for 2 h and read by 96-well plate reader at 450 nm. All groups were done in triplicate wells.

For cell cycle analysis, cells were collected and fixed in 70% ethanol overnight at 4°C and then treated with the concentration of 10 μg/μl RNAase 2.5 μl for 30 min before with 50 μg/μl propidium iodide and analysed by Fluorescence Activated Cell Sorting (FACS).

Cell apoptosis examination was performed using an annexinVFITC apoptosis detection kit (Southern Biotech) according to the manufacturer’s instruction and then analysed by FACS.

This study was approved by the Ethics Committee of the first affiliated hospital of Zhengzhou university and followed the Helsinki Declaration. We gathered 45 endometrioid adenocarcinoma, 30 endometrial dysplasia and 30 endometrial simple hyperplasia cases at the first affiliated hospital of Zhengzhou university (Zhengzhou, Henan, China) from October 2013 to May 2014. All cases were selected based on the following criteria: patients had pathologically confirmed diagnosis of EC or not, samples were stored at the pathology department of this hospital; patients were excluded if they underwent neoadjuvant chemotherapy or radiotherapy.

The rabbit polyantibody of IGFBP-rP1 was used in IHC to be primary antibody. The IHC was undergoing as the manufacturer’s protocol (Cwbiotech, China).

Using the staining results of cytoplasm or cell membrane as the criterion, five high-magnification fields were randomly observed by reference to the semi-quantitative fractionation of positive cells such as Fromowitz, and 100 cells were counted for each field of view.

According to the manufacturer’s protocol, Genomic DNA was isolated from tissues using the Genome DNA extracts kit (Cwbiotech, China) and the DNA methylation was detected by EZ DNA Methylation-gold kit (ZYMO Research, USA). All the primers and annealing temperature of its primer used in PCR amplification were described in Table 1. The PCR products were performed to agarose electrophoresis.

Table 1. The primers of the IGFBP-rP1 methylation.

Statistical analysis was carried out by means of SPSS (version 17.0; SPSS Inc., Cary, NC, USA). Chi-squared and Student’s ttest were used to determine statistical significance at p<0.05. The correlation between the DNA methylation and the expression of IGFBP-rP1 in EC was analysed by Spearman coefficients. All data were expressed as and all experiments described above were performed in triplicate.

Efficient up regulation of IGFBP-rP1 in HEC-1A cells 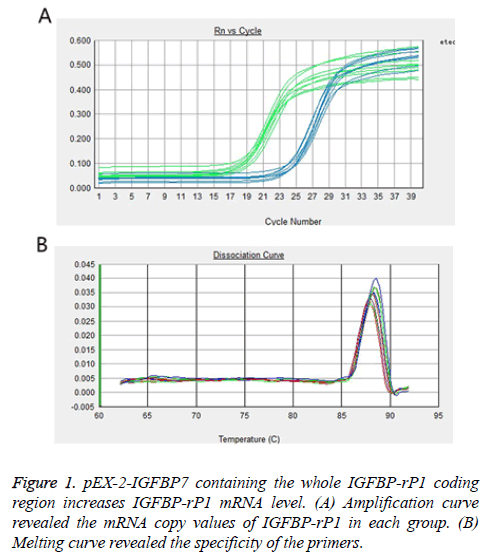 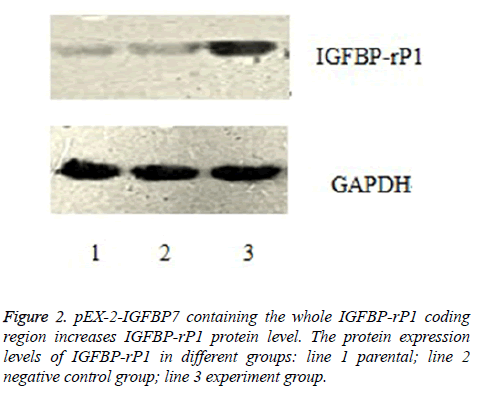 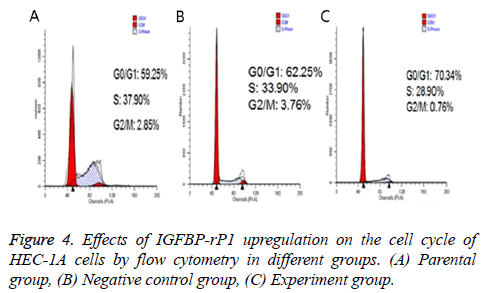 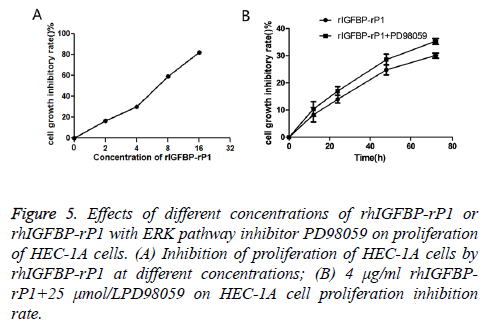 The change in the expression of total ERK1/2 and p-ERK1/2 protein in the cells was observed by using Western blot after 24 h of treatment with different concentrations of rhIGFBP-rP1 (0 μg/ml, 2 μg/ml, 4 μg/ml, 8 μg/ml). Western blot test showed that the change of total ERK was not evident, while the expression of p-ERK1/2 was inhibited in a dose-dependent manner, as shown in Figure 6. 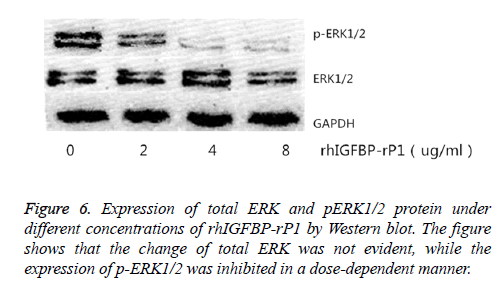 Figure 6: Expression of total ERK and pERK1/2 protein under different concentrations of rhIGFBP-rP1 by Western blot. The figure shows that the change of total ERK was not evident, while the expression of p-ERK1/2 was inhibited in a dose-dependent manner.

The expression of IGFBP-rP1 in three endometrial lesions

RT-PCR results showed that the relative expression of IGFBP-r P1 m RNA in endometrioid adenocarcinoma was significantly higher than that in endometrial dysplasia (t=5.17, P<0.01) and simple endometrial hyperplasia (t=6.56, P<0.01), but there was no significant difference between the first two groups (t=1.33, P>0.05, Table 2).

Table 2. The mRNA levels of IGFBP-rP1 in three endometrial lesions. 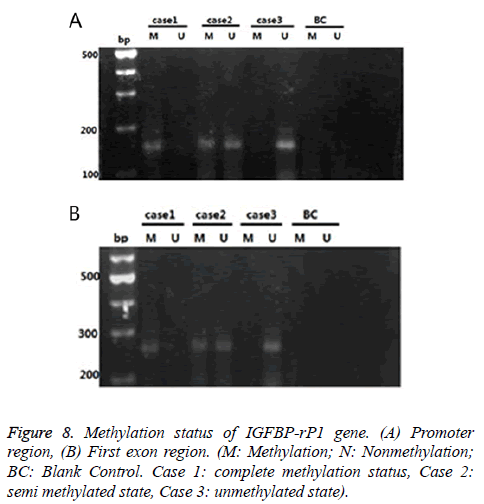 The methylation rate (5/45) of the IGFBP-rP1 gene in the first exon region of endometrial adenocarcinoma had no significant difference compared with those in the untypical endometrial dysplasia (7/30) and simple hyperplasia (8/30) (χ2=3.325, P=0.190>0.05).

Insulin-like growth factor system is composed of ligand, cell surface receptor, insulin receptor, IGF binding protein and IGFBP protease composition, and it is the focus in studies of insulin resistance. IGFBP-rP1 is an important member of the IGFBPs family and has been extensively studied because of its low binding to insulin growth factors. Many studies have shown that IGFBP-rP1 plays a role in tumor suppressor genes in various tumors, such as breast cancer [8,20-22], hepatocellular carcinoma [23] and lung cancer [24]; however, it can be expressed as a carcinogenic effect on glioma [25]. Previous investigations showed that IGFBP-rP1 also plays an important role in the neuroendocrine differentiation for certain type of tumor [26]. It has been largely accepted that tumor with neuroendocrine differentiation is one of the most important prognostic factors [27-29]. In the view of the neuroendocrine differentiation, investigations of IGFBP-rP1 in EC have greater significance.

Abnormal methylation of DNA is a common molecular event that occurs in the early stages of human tumors and is a further refinement and development of the Knudson secondary strike mechanism [40]. Once methylation occurs, the transcriptional regulation of the corresponding gene is affected, which inhibits gene expression [41-46]. The present study suggests that the hypermethylation state in the promoter region affects the transcription of the gene, thereby influencing the expression of the gene. This is one of the mechanisms that inhibit the antitumor effect of IGFBP-rP1 gene, which is related to the occurrence and development of tumor. Since DNA methylation is a reversible chemical modification, DNA demethylation may restore the tumor suppressor gene activation and play an antitumor effect, which suggests that this principle can be used in clinical anti-tumor treatment, providing new solution to treat cancer.

This study was approved by the Ethics Committee of the first affiliated hospital of Zhengzhou university and followed the Helsinki Declaration.