Method: Totally 108 SD rats were randomly divided into Sham operation group (36 cases), Model group (36 cases) and Huoxue Tongdu decoction treatment group (36 cases). BBB score was evaluated for the hind limbs before surgery and at 1 d, 3 d, 5 d and 7 d after surgery, randomly gave 6 rats termination in each group. The spinal cord was harvested and subjected to HE staining and Nissl staining for observing the morphological changes of motor neurons in the anterior gray horn. The expression levels of BDNF and NT-3 were detected by immunofluorescence assay, and the cells positive for the expression of these two proteins were counted. Western blot was performed to detect the expression of Trk B and Trk C receptors.

Conclusion: Huoxue Tongdu decoction promoted the repair of motor function in rats with SCI via the NFs/Trk pathway, which may be beneficial for the survival and axonal repair of neurons.

Spinal Cord Injury (SCI) consists of the primary and secondary type [1]. So far, no treatment can completely cure SCI, and medical provision for patients with SCI was usually met with frustration, bringing great burden to the patients as well as the society [2,3]. In America, up to 1.275 million patients live with SCI and nearly 20,000 new cases are increasing yearly [4]. SCI is a complex pathophysiology, depending on the site and severity of lesion along the spinal cord, the symptoms can vary widely, which includes edema and ischemia of spinal cord, ion imbalance and electrolyte disturbance, toxicity of excitatory amino acids, inflammation, cell necrosis and apoptosis. SCI will lead to loss of muscle function, sensation, or autonomic function served by the spinal cord below the level of the lesion [5].

Chinese medicinal herbs used for medication were more than one thousand years, Huoxue Tongdu decoction is an experiential prescription invented by Anzhen, a Chinese expert in orthopaedics. This prescription is now widely used to treat Spinal Cord Injury (SCI) with attractive treatment effects [6]. The main ingredients of the prescription are Astragalus mongholicus, Angelica sinensis and Salvia miltiorrhiza. These Chinese medicinal herbs can promote blood circulation and remove blood stasis [7]. So this decoction should be applied to bone fractures and nerve injury. Neurotrophic Factors (NF) are polypeptides which can maintain cell survival, promote cell growth and differentiation and have other cell functions [8]. NFs play an important role in spinal cord injury recovery, neuron survival and regeneration, and synaptic reconstruction following SCI, which can be depended to realize the motor function of the limbs [9,10]. This study aimed to clarify the working mechanism of Huoxue Tongdu decoction for SCI by focusing on its effect on NFs.

Judgment of the result

All the data was represented by (Mean value and Standard deviation, ͞x ± ta). Statistical analysis was performed by using the SPSS22.0 statistical software. The Kruskal-Wallis-H test was used to compare the data of multiple groups, non-parametric numerical data. The Wilcoxon test was used for statistical analysis of changes during follow-up within the groups (Sham operation group, Model group, Huoxue Tongdu decoction group). The two group test data by using LSD. Non-normal distribution or homogeneity of variance used nonparametric test or one-way ANOVA of Dunnett’s T3 method. When P<0.05, it means that the difference was considered to be statistically significant.

Comparison of the percentage of Nissl staining positive areas

Cells which are positive for BDNF and NT-3 in the Model group and Huoxue Tongdu decoction treatment group were detected and localized by the immunofluorescence assay.

The number of BDNF-positive cells in Huoxue Tongdu decoction treatment group was significantly higher than that in the Model group (P<0.05). Both BDNF and NT-3 were localized to the neurons in the spinal cord (Table 3).

Table 3. Comparison of detection and localization of cells which are positive for BDNF and NT-3 between Model group and Huoxue Tongdu decoction group ((͞x s), %).

Table 4. Expression of Trk B and Trk C receptors in the spinal cord among three groups of mice ((͞x s), %). 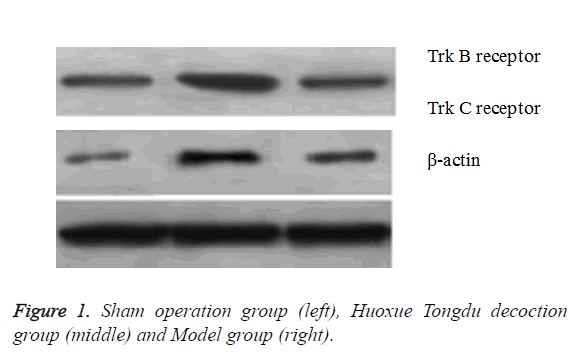 SCI is usually caused by external impact that acts on the spinal cord either directly or indirectly, leading to motor and sensory dysfunction, sphincter of oddi dysfunction, abnormal tension of muscle and other pathological changes [11,12]. The severity and symptoms of SCI depend on the position and features of the primary lesions. Traumatic SCI is mainly seen in adults, causing the adverse consequences of dyskinesia combined with and multiple lesions. SCI is difficult to treat and featured by high incidence of complications and disability rates. Therefore, the patients may suffer from physical and physiological trauma if not properly treated [13-15]. A series of cellular and molecular events may take place after SCI, including primary and secondary damage pathways. Much more severe pathological changes occur due to the magnification effect through secondary damage, which is usually associated with the activated inflammatory cascade [4-6]. Either primary or secondary SCI may lead to paraplegia or event death. Research shows that local or systemic inflammatory response will occur following SCI [6]. The expression levels of some genes are upregulated after SCI and mediate the NF-κB and AMPK signalling pathways. SCI is usually accompanied with massive release of nerve growth factors (NGFs), which are among the first discovered neurotrophins. NGFs have been intensively studied and regulate nerve growth, with neurotrophic effects and promoting effects on synaptic growth. NGFs can be found in central nervous system and peripheral neurons, promoting the development, differentiation and regeneration of neurons. The major types of neurotrophins include NGF, BDNF (Brain- Derived Neurotrophic Factor), basic Fibroblast Growth Factor (bFGF), Ciliary Neurotrophic Factor (CNTF) and NT-3 (Neurotrophin-3) [16-19].

Relevant studies have shown that Huoxue Tongdu decoction can be used to treat SCI via multiple pathways [7-9]. The main ingredients of Huoxue Tongdu decoction include Astragalus mongholicus, Angelica sinensis, Salvia miltiorrhiza, Eucommia ulmoides, myrrh, earthworm, Caesalpinia sappan, herba lycopi, Rhizoma cibotii and antler. This decoction has an obvious treatment effect on bone fractures and nerve damage through the following pathways: Firstly, Huoxue Tongdu decoction inhibits the apoptosis of spinal cord nerve cells by reducing the expression of c-Fos and c-Jun proteins in the spinal cord, thus relieving the spinal cord ischemia-reperfusion injury and promoting motor function recovery. secondly, the decoction which suppresses inflammatory responses by down-regulating the expression of TNF-α, IL-1β and IL-8 in the spinal cord, thus relieving SCI. Thirdly, the decoction which relieves inflammatory responses by suppressing the expression of NF-κB and VCAM-1, thus relieving the spinal cord ischemia-reperfusion injury and promoting the recovery after nerve damage.

BDNF and NT-3 are mainly present in neurons of the spinal cord. As members of NGF family, BDNF and NT-3 are only expressed at a low level under normal conditions. But they are up-regulated under the action of various inflammatory factors following neuronal damage, which activates the neuronal protection mechanism via the upstream and downstream signalling pathways. While preserving the damaged neurons, the neuronal regeneration is promoted. Moreover, higher the expression of NGFs, the faster the recovery from nerve damage will be. Self-repair capacity of the nerve cells is only possible within a certain limit, and the up-regulation of NGFs will facilitate self-repair to the largest extent. The results of the present study accorded with our expectations.

Further experiment indicated that Huoxue Tongdu decoction exerted a neuroprotective effect by up-regulating Trk B and Trk C receptors. Trk receptor family consists of Receptor Tyrosine Kinases (RTKs) that regulate the intensity and plasticity of synapses in mammals. The activated Trk receptors influence the survival and differentiation of neurons via multiple signalling pathways. The common ligands of Trk receptors are neurotrophins, and the binding between the two groups is highly specific [2,20]. Each neurotrophin binds to a different Trk receptor with different affinity, which results in the regulation of cell survival and other functions. We believe that Huoxue Tongdu decoction achieved a neuroprotective effect by up-regulating Trk receptors in the spinal cord and promoting the binding between Trk receptors and neurotrophins.