The relationship between postural deviations and body mass index among university students.

The purpose of this study was to determine the relationship between postural deviations and body mass index (BMI) among University of Venda students. This cross-sectional survey involved 100 purposively selected students in the Centre for Biokinetics, Recreation and Sports Science, University of Venda, South Africa. Height and weight were measured and BMI determined. The lateral, anterior and posterior views of postural deviations (kyphosis, scoliosis, and lordosis) were assessed. The mean age of the participants was 22±2.4 years. Majority (34%) of the participants had kyphosis, lordosis (22%) and scoliosis (3%). There was a significant difference between females and males with kyphosis and lordosis (X2= 11.222, p= 0.001) and (X2= 5.138, p= 0.023), respectively. There was no significant relationship between BMI and kyphosis and scoliosis (X2= 6.036, p=0.196) and (X2= 2.149, p= 0.708), respectively. However, there was significant difference between BMI and lordosis (X2=19.193, p=0.001). The prevalence of postural deviations was in the order of kyphosis>lordosis> scoliosis; with kyphosis being the most common type of postural deviation among the University of Venda students. There is no significant relationship between BMI and kyphosis as well as scoliosis. However, the inverse relationship between BMI and lordosis suggests increasing risk of developing lordosis as BMI increases. There is a significant gender difference in kyphosis and lordosis with the female students having higher prevalence of these postural deviations compared to the males. There is need to educate as well as design intervention measures to correct bad posture among the students as this could cause irreversible musculoskeletal, neurological and pathological damage in future.

Posture is the alignment and maintenance of body segments in certain positions such as standing, walking, lying or sitting [1,2]; and is the most important factors affecting physical and mental status of individuals through their lives [1,2]. The Posture Committee of American Academy of Orthopaedics in 1994 defines posture as the regular and balanced arrangement of skeletal components so as to preserve supportive structures of the body from injury and progressive deformation [3,4]. Several factors could affect posture in humans including familial, anatomical structure impairments, postural habits and occupation [2].

Bad posture may be attributed to muscle and emotional issues, which could generate positional or structural deviations if the individual remains in inappropriate positions for a long time [5]. Although postural deviation is commonly associated with the spine, other parts of the body have also been implicated in postural mal-alignment [6]. It has been shown that if body segments are held out of alignment for extended periods of time, muscles becomes shortened or lengthened in position [7] thus affecting muscle efficiency; and predisposing individuals to musculoskeletal, neurological and pathological conditions [7,8]. In this regard, a decrease or increase in the normal body curves might result to uneven pressure at the joints, ligaments, muscles and bones [6] and failure to institute timely corrective measures, degenerative changes will occur leading to postural deviation [9] This phenomenon has been widely studied in several fields such as anthropology, anatomy and orthopaedics because of its significance in the context of human movement and development [9,10]. Posture analysis is crucial for clinical assessments in physical medicine and rehabilitation [2]. Exploring the relation between postural balance and anthropometric measurements is important in order to determine the postural deviations in developing treatment programmes for postural scoliosis, increasing lumbar lor dosis, straight back posture; and assessing the different deformities that may have occurred [11].

The best body posture can be observed in children; however, as individuals grow older, they develop habits (change in gait, adopting abnormal sitting and standing positions) that predispose them to poor posture [8]. Poor posture occurs in all works of life and its prevalence is increasingly on the rise [10] despite efforts to educate people on the effects of poor posture, the condition remains a daunting problem [9] particularly in the adult population.

This study was conducted at the Centre for Biokinetics, Recreation and Sport Science in University of Venda, a rural-based university in South Africa; located in Thohoyandou town in Vhembe district Limpopo province, about 70 km from Makhado Town.

Centre for Biokinetics, Recreation and Sport Science grant approval for the study. Permission to conduct the study at University of Venda was obtained from the University of Venda; Registrar’s Office through the Head of Department and the Dean of School of Health Sciences. Participants were briefed on the aim and nature of the study and the procedures involved. They were told that their participation in the study is voluntary and that they are free to withdraw from the study should they feel unsatisfied with the way the study is being conducted. The anonymity and confidentiality of the participants were assured. Participants who agreed to participate signed the consent form.

Weight and height were determined according to the standard anthropometric methods of the International Society for the Advancement of Kinanthropometry (ISAK) [13]. Weight was measured in kilogrammes (kg) using a bathroom digital scale. Height was measured to the nearest of 0.1 cm, using a mounted stadiometer. Body mass index (BMI) was determined according to WHO [14] classification.

Postural assessment criterion as outlined by [15] was adopted. The procedure involves drawing a plumb line vertically and asking the participants to stand erect on a bench; marking the five anatomical points which include the ear, acromion, greater trochanter, patella and malleolus. Participants were assessed from the lateral, posterior and anterior views.

Participants were observed without shirt in lateral view. The ear lobe was in line with the tip of the shoulder (acromion process) and the high point of the iliac crest. The lateral line, dividing the body into front and back (coronal plane) indicated normal posture. If the chin pokes forward, it indicates lumbar lordosis. Each spinal segment has normal curves and the shoulders in proper alignment; if the shoulders drops forward it indicate scapula protraction and rounded shoulders. The pelvic angle is normal at 30 degrees but the posterior superior iliac spine should be slightly high than the anterior superior iliac spine. The knees are straight, flexed in recurvatum (hyperextended), usually the normal standing position of the knees are slightly flexed at 0 to 5 degrees and hyperextension of the knees may cause an increase in lordosis in the lumbar spine [15].

Anteriorly, the head was straight on the shoulders (midline) the tip of the nose and in line with the manubrium, sternum, xiphisternum and the umbilicus; this line divides the body into right and left (sagittal plane) and the upper trapezius neck line was equal on both sides. The levelling of the shoulders indicated normal posture. However, where the dominant side is slightly lower, the clavicle and acromioclavicular joint are level and equal and there is no protrusion, depression or lateralization of the sternum, ribs or costal cartilage. The waist angles were equal and arms were equidistance from the waist. However, individuals with scoliosis, one arm will hang closer to the body than the other arm. The carrying angles at each elbow are equal, and the normal angles vary from 5 to 15 degrees [15].

Participants were observed in posterior view. The shoulders were level and the head was in midline, the spines and the inferior angles of the scapulae were level. If the medial borders of the scapulae are equidistance from the spine, it indicates normal posture. Straight curved lateral spine indicates scoliosis; the ribs protrude or symmetrical on both sides with the waist angles equal. Arms were equidistant from the body and equally rotated; posterior superior iliac spines were at the same level, the higher one, suggests one leg was shorter or rotation of the pelvis may be present [15].

Deviations of the spine include: Lordosis (extension of the lumbar spine), Kyphosis (flexion of the thoracic region) and Scoliosis (lateral curvature of the spine) [10].

Descriptive statistics was presented in percentages. Chisquare was applied to test the significant relationship between variables. The statistical significance was set at p < 0.05. All statistical analyses were conducted using the Statistical Package for the Social Sciences (SPSS) version 21.0. 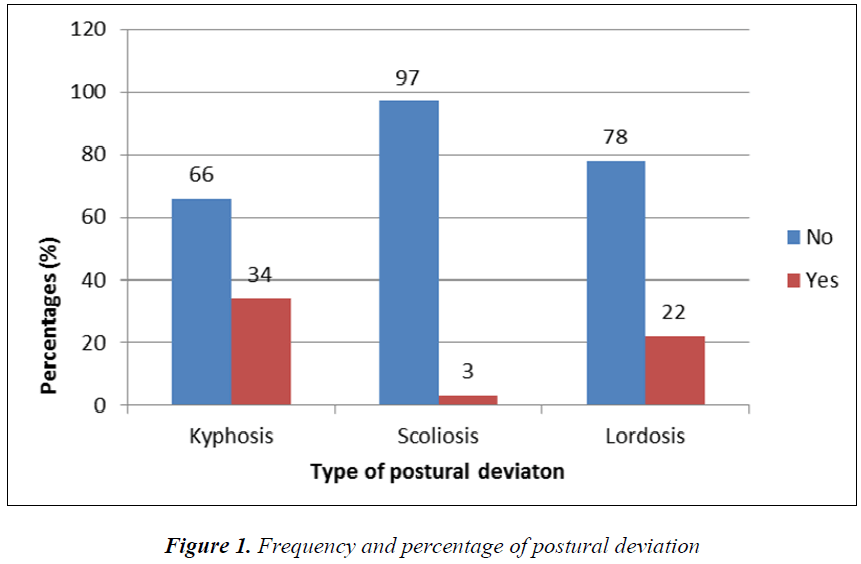 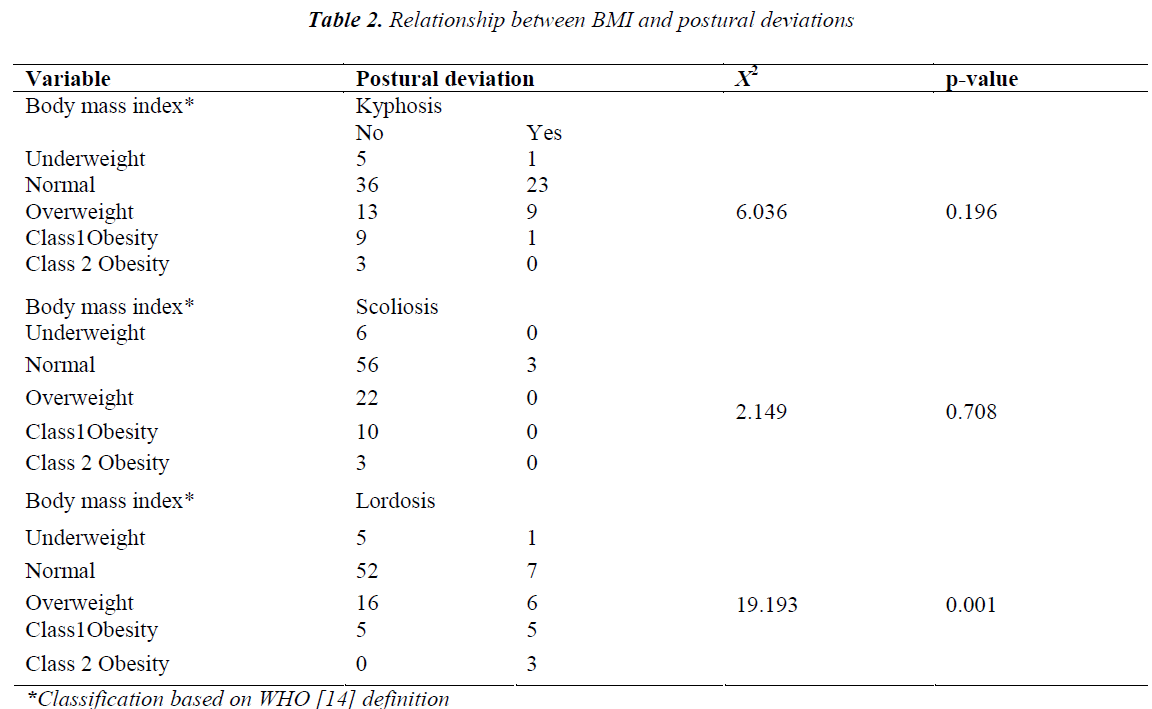 *Classification based on WHO [14] definition
Table 2: Relationship between BMI and postural deviations

The present study was designed to assess the prevalence of postural deviation among University of Venda students which information is lacking. Such information might help to educate the students on prevention and management of postural deviations. The findings of this current study indicates that majority (34%) of the participants had kyphosis; lordosis (22%) while 3% had scoliosis. The finding also demonstrates significant gender difference in postural deviation with majority of the males and females having kyphosis and lordosis, respectively. In contrast, no significant gender difference was found for scoliosis. This finding corroborates a study in Southern Brazil [16] among students, which reported kyphosis in 16.6% of students, 33.2% and 27.9% had scoliosis and lordosis, respectively. Like the present study, females were less likely to have kyphosis than males but more likely to have lordosis (p=0.01) while scoliosis did not show significant difference (p=0.53). Similar results has been reported by other researchers [17,18] but the reason for this is poorly understood. However, some studies have suggested that females have increased lordosis angle [19,20] and greater buttock size [21], which may contribute to the higher rate of lordosis seen in female participants but this is not absolute as other studies observed no significant gender difference in lordosis [22] and kyphosis being more prevalent in females [23]. The gender difference observed in the present study may be due to the anatomical makeup of the student population where females have greater gluteal mass and the males are often slender and taller.