The knowledge about, beliefs and attitudes of medical students regarding vaccination against the human papillomavirus, in South Africa: A Cross- Sectional Study.

There are two vaccines for cervical cancer and both are available in South Africa. Both these vaccines are currently being considered for a national vaccination programme. The successful implementation of a vaccination programme will largely depend on how future clinicians are oriented regarding these vaccines. The purpose of this study was to investigate the knowledge, attitude and beliefs of medical students in South Africa concerning vaccination against the human papillomavirus (HPV). This was a cross-sectional study conducted among 100 medical students using a self-administered questionnaire. More than two-thirds (71%) of the respondents were aware of HPV and among them 81.2% mentioned vaccination against HPV. The majority (81.7%) were aware that persistent HPV infection is a cause of cervical cancer. Only 14.5% of the medical students knew that between 60 – 80% of cervical cancers is caused by HPV types 16 and 18. Overall, knowledge regarding HPV infection was low among the medical students as the average score was 3.23 (possible range was 0 to 9). The majority of the students (72.9%) indicated that the vaccine should be given to girls before the onset of sexual activity. Overall, 86.7% of respondents intend to prescribe HPV vaccines. In conclusion, overall, knowledge regarding HPV vaccination among the medical students in South Africa was low. But they had a positive attitude towards it. There is a strong need to provide more education to medical students about the relationship of HPV infection and cervical cancer and the benefits of vaccinating adolescent girls to prevent cervical cancer in the future.

Cervical cancer is the most common gynecological cancer among women worldwide. More than half a million women are diagnosed with cervical cancer contributing to around 275,100 deaths, across the globe annually. More than 85% of the deaths occur in developing countries that have minimal resources to cope with the situation [1]. Thus, globally it is a public health problem. The discovery of the human papillomavirus (HPV), the fact that HPV is responsible for virtually all cervical cancers and the development of HPV vaccines opens up exciting new possibilities for controlling this disease [2].

The bivalent vaccine CervarixTM, for HPV types 16 and 18; and the quadrivalent vaccine GardasilTM, for HPV types 16 and 18, as well as non-oncogenic HPV types 6 and 11, which are the most common types causing genital warts are available in South Africa [9]. Both vaccines are given in a three-dose schedule: 0, 1 and 6 months for the bivalent vaccine; 0, 2 and 6 months for the quadrivalent vaccine [9]. These vaccines are currently being considered for a national vaccination programme in South Africa, which will almost certainly make a significant difference in the cervical pre-cancer and cancer incidences in the future.

To implement HPV vaccine program successfully in any country, an awareness program should be conducted at various levels regarding HPV infection and cervical cancer. In a few years time medical students will be the practicing clinicians. They will be the first line information resources for the population they will serve. Therefore, the objective of this study is to investigate the knowledge, attitude and beliefs of medical students in South Africa concerning vaccination against HPV.

This was a cross-sectional study conducted among all the 1,199 medical students who were registered at the University of Limpopo (Medunsa Campus) during 2013.

Sample size for the study was calculated based on the following information: assuming 90% had sufficient knowledge regarding the HPV vaccine, with 5% reliability, and design effect as 1, the study required 91 students. We added 20% more to the sample size for incompleteness thus the final sample size became 109 students. The study sample was selected using multistage sampling techniques. Firstly, students were stratified according to year of study. Secondly, probability proportional to sampling method was used to select the samples. Part-time and non-medical students were excluded from the study. A self-administered questionnaire, with closed and a few open-ended questions, was developed for this study, based upon the Model for Clinical Prevention [10]. This model was chosen because it takes into consideration predisposing factors for physicians (health, beliefs and attitudes), and enabling factors (knowledge). The questionnaire consisted of three sections assessing: (1) General information, (2) HPV infection and its prevention (58 items), and (3) demographic characteristics. On average, the study questionnaire took about 15–20 min to complete.

Approval from the Medunsa Research Ethics Committee of the University of Limpopo, and from the Deputy Vice- Chancellor of Medunsa was obtained before commencing with the study. All the participants were informed fully about the study. It was also highlighted that participation in the study was voluntary and anonymity and confidentiality would be maintained at all times as no names of the participants appeared on the questionnaire.

Data were entered into a Microsoft Excel 2003 spread sheet and imported into SPSS 21.0. for Windows for analysis. For nine knowledge items, a “True–False–I do not know” scale was used. One point was given for each correct answer. For items measuring perceived professional and societal support/barriers and perceived benefit from vaccination, as well as the intention to recommend an HPV vaccine, a 4-point Likert scale, ranging from strongly disagree (one point) to strongly agree (four points) was used.

The analysis of the results was summarized using descriptive summary measures: expressed as mean (SD) for continuous variables and percentages for categorical variables. A multivariate logistic regression model was carried out to determine variables independently associated with the intention to prescribe HPV vaccination.

More than two-thirds (71%) of the respondents were aware of HPV and among them 81.2% knew about HPV vaccination. Only those students who were aware of HPV were asked further questions concerning HPV infection and cervical cancer screening which are reported in Table 1. Only 28.2%of the respondents knew that HPV is the most common sexually transmitted infection. Among those who were aware of HPV, 81.7% knew that persistent HPV infection is the pivotal cause of cervical cancer. A large proportion of students (62.9%) mentioned that the sensitivity of conventional Pap tests is >75%. The fact that between 60 – 80% of cervical cancers is caused by HPV types 16 and 18, is known by only 14.5% of the medical students. More than half ( 60.9% ) of the respondents did not know that anogenital warts induced byHPV6 and HPV11 are cervical cancer precursors. Overall, knowledge regarding HPV infection was low among the medical students as the average score was 3.23 (possible range was 0 to 9). The majority of the students (87.7%) reported that they do not have sufficient information regarding HPV infection. 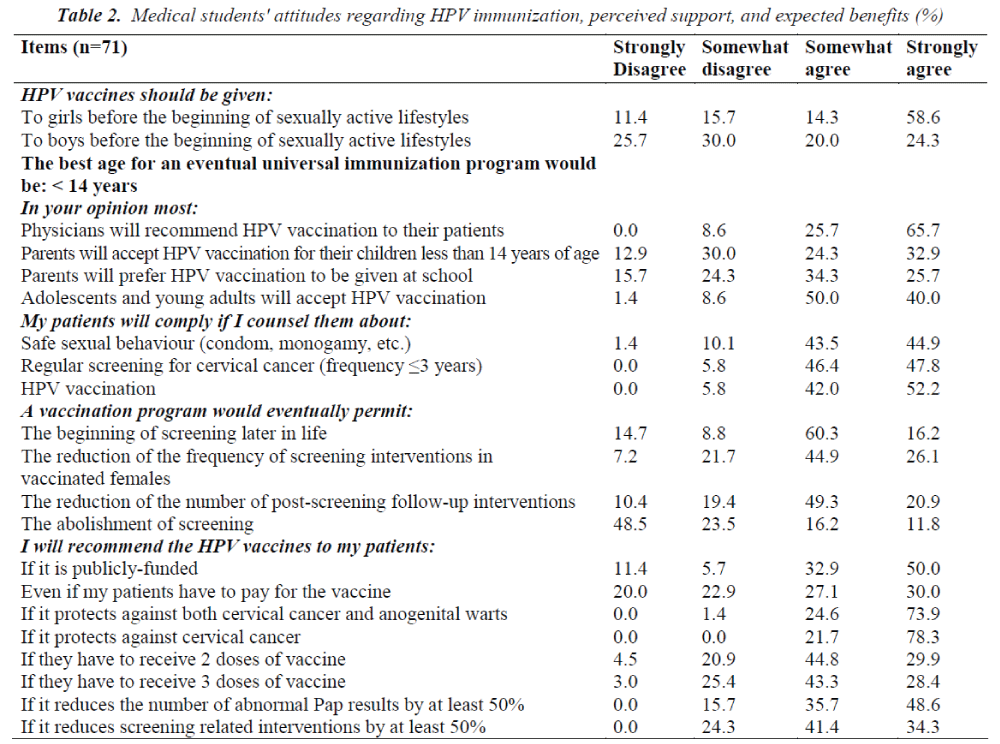 More than 90% of the students believe that physicians will support HPV vaccination and adolescents and young adults will accept HPV vaccination. More than half (57.2%) believe thatparents will accept HPV vaccination for their children under the age of 14 years and 60% believethat parents will prefer HPV vaccination to be given at school. Almost three-quarter (71%) of respondents expect that the vaccination will reduce the frequency of screening in vaccinated women, and 70.2% believe that it will reduce the number of post-screening followupinterventions. The majority (82.9%) of respondents intend to recommend HPV vaccination if it’s publicly funded and 57.2% if patients have to pay for the vaccine. Almost all (98.6%) students intend to recommend a vaccine that protects against both cervical cancer and anogenital warts, while all the students reported that they will recommend a vaccine that protects against only cervical cancer.

Overall, 86.7% of respondents intend to prescribe HPV vaccines. Applying stepwise logistic regression analysis, the study did not find any significant predictor for prescribing the HPV vaccine (data not shown).

Results from the current study indicated that a majority of the students knew that persistent HPV infection is the primary cause of cervical cancer. This finding is similar to the study conducted among medical students in India [11]. A higher proportion of incorrect responses were observed for statements related to Pap test sensitivity and the impact of the regular screening on the lifetime risk of cervical cancer than for other knowledge items. An important proportion of the medical students wrongly associated anogenital warts induced by HPV6 andHPV11 with cervical cancer precursors. This might send a wrong message to their patients. In addition, some respondents overestimated the proportion of cervical cancer related to HPV16and HPV18, which may lead to an overestimation of the expected vaccine impact. Studies conducted among women from South Africa, Kenya, and Botswana found that women had little knowledge about cervical cancer or the HPV vaccine [11,14,15].

Overall, knowledge regarding HPV infection was low. But, first and second year students had lower knowledge score (2.17 vs 3.38) than their older counterparts. This finding is in contrast with the study from Malaysia [16]. The Malaysian study conducted among medical and pharmacy students found a high level of knowledge regarding HPV vaccination. A possible reason for this could be that the Malaysian study included students from the third year whereas the present study included students only from the first and the second years. First year and second year students do not come into contact with clinical issues and this might have led to them not having enough information compared to older students.

Similar to a Chinese study, a large number of medical students in the present study did not know that HPV vaccination should be taken before sexual debut, after which the risk of infection with HPV increases dramatically [17]. Two studies conducted among Fellows of the American College of Obstetricians and Gynecologists and family physicians supported vaccination of 9 to 13-yearold girls [18,19]. A Brazilian study found that physicians and medical students reported preferences for vaccinating girls at ages ranging from 14 to 18 years [20]. Among South African girls, the perceived median age of sexual activity is considered between 9 and 15years. A qualitative study conducted at policy, health service and community levels of enquiry investigating key challenges and barriers towards the introduction of HPV vaccine in the Western Cape Province, South Africa reported that some providers and community respondents suggested commencing at the age of 9 due to high levels of sexual abuse and early onset of sexual activity in many communities [21].

It has been demonstrated that in general people are likely to accept vaccination and that clinicians and other healthcare providers are the most trusted people to disseminate this evidence. The present study found that a majority of the students believe that physicians will support HPV vaccination and intend to prescribe the HPV vaccine. This finding is in contrast with other studies conducted among doctors. For example, American clinicians are not always the strongest advocates of HPV vaccination. One study conducted among medical specialties found that only35% of responders would always recommend vaccination to young adolescents [22]. Another study conducted among paediatricians found only 46% were willing to recommend vaccination for girls under 12, rising to 77% for 13– 15 year olds [23]. A very recent study conducted among family medicine residency graduates in the USA reported that 79% offer the HPV vaccine atleast most of the time to their adolescent female patients in their practice [24].

According to the authors, the present study is the first to investigate the knowledge, attitudes and belief about the HPV vaccine among the future health care professionals in South Africa. However, the study had some limitations. It was based on convenience sampling. Medical students from only one university were included which might not reflect the overall awareness of medical students in South Africa. These limitations should be taken into consideration before interpreting the findings.

HPV vaccination is a relatively new concept for primary prevention of cervical cancer. Overall, knowledge regarding the HPV vaccine among the medical students in our study is low. But they had a positive attitude towards it. Many of them are willing to prescribe the vaccine to their adolescent patients. The academic curriculum in the medical schools needs to focus more on such high priority practical upcoming issues. There is a strong need to provide more education for medical students about the relationship of HPV infection and cervical cancer and the benefits of vaccinating adolescent girls to prevent cervical cancer in the future.

The authors wish to thank all the medical students who voluntarily participated in the study.