The efficacy of oral hygiene by micro-bubbles cleaning.

Objective: Patients with periodontitis often have difficulty in maintaining oral hygiene with toothbrushes during treatment periods, especially for patients with severe conditions where brushing may cause bleeding of the gingiva and increase the chance of bacterial infection. Patients who have oral cancer, or who are bedridden long-term due to chronic diseases, also experience similar inconveniences in being unable to maintain oral hygiene through brushing their teeth and must do so through other means. Methods: We explored the method for dental washer, using the micro-bubble generator connect the ejection nozzle to an ergonomically designed soft teeth-tray that fits with the tooth configuration of a typical human oral cavity to clean oral plaque bacteria. Five levels of rotor speed and 4 type of ejection hole diameter, totally, were using 20 combinations to clean oral plaques bacteria. Results: Our results showed that with various combinations of motor speed settings and pore diameters, a clearing rate of 56% or more (average 79.55%) could be achieved, while in some combinations a clearing rate of 91.64% was possible. The nozzles with smaller diameters coupled with low speed motor had higher cleaning efficiency; the larger the diameter, the higher the volume and the larger the bubble dimensions and better bacteria removal. Conclusion: The experimental verification is effective by controlling ejection hole diameter and soft tooth-tray on better bacteria removal. For future, it is hoped that can definitely solve the dental hygiene issue for long-term bed-ridden patients who could not use toothbrush.

The most common way of maintaining oral hygiene is through brushing teeth. However, for patients with periodontitis, brushing teeth afflicted with gingivitis caused by bacterial infection often causes gum bleeding. Studies have shown that patients with both diabetes and periodontitis had higher risk of developing destructive periodontitis through tooth brushing [1,2]. Periodontal disease will also influence health; studies have shown that for patients with cardiovascular diseases and diabetes, the pathogens from the periodontal disease blood vessel walls, causing cardiovascular inflammation of the vessel wall, blockage or severe heart attack [3]. Burns et al. [4] and Rubio et al. [5] showed that micro-bubbles with smaller diameters tend to gather more in higher surface areas; more contact surface areas with contaminants meant longer contact time and better removal efficacy. The diameter of ejection hole of water is a key factor influencing the dimensions of micro- bubbles; thus, in our study we modified the diameters of the nozzle (water ejection port) to experiment on different bubble dimensions [6]. Van der et al. [7] used tooth brushes from Braun and Philips and conducted an experiment on dental plaque removal in 35 college students, using 6 positions on each tooth for evaluation of dental plaque index. Grossman & Proskin [8] conducted a comparative study on using manual and electrical tooth brushes in the removal dental plaques in children aged 8 to 12 years old and also used dental plaque index to evaluate the efficiency of dental plaque removal. It can be seen that the dental plaque index was widely used in the aforementioned studies on dental plaque removal, oral cavity hygiene and prevention of periodontal diseases. However, although the index can be used to subjectively interpret the degree of cleanliness, bacteria are invisible to the naked eye and the actual plaque removal could not be objectively measured. Therefore, in order to more thoroughly investigate the effect of dental plaque removal, the authors used microbial validation as the basis of quantifying cleaning efficacy. 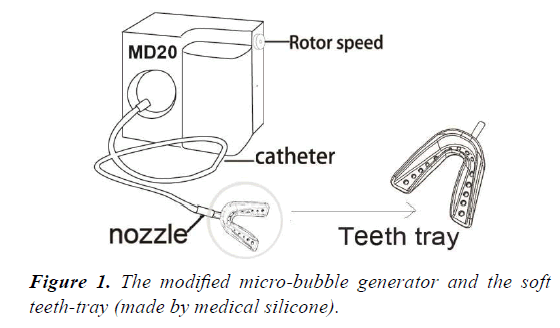 Figure 1. The modified micro-bubble generator and the soft teeth-tray (made by medical silicone).

Figure 1 shows the customized ejection path of the commercially available dental irrigator Braun MD20 used as micro-bubble generator. There only the nozzle diameter and quantities in this device were changed, The MD20 dental irrigator has a five-step variable speed setting, which was preserved in our study and used as a dependent variable. The rotor speed was measured with a contact tachometer that measures by 10 times in each rotor speed, taking the mean as the representing value. The results were 2580 rpm, 3021 rpm, 3527 rpm, 4210 rpm and 5380 rpm. The hole of ejector nozzle, we built 4 stainless steel nozzle shapes with CNC (Computerized Numerical Control) fabrication, which measured 16mm in length, 6mm for the outer diameter and 5 mm for the inner diameter. The ejection hole diameter was fabricated with electric discharge machining, which were the 0.3 mm, 0.16 mm, 0.63 mm and 0.8 mm nozzles, respectively. The numbers of nozzles were three and arranged in a triangular configuration. A total of 20 experimental combinations were produced from five rotational speed and four diameters of the three-nozzle, which allowed generation of water streams with different flow volume, velocity and bubble diameter for carrying out dental plaque bacteria removal experiments.

In this study, we measured the flow volume, velocity and micro-bubble diameters produced by the micro-bubble generator, and set them as the under 20 different experimental conditions. The water flow volume was done by measuring the total water volume for 10 s with a measuring cup holding the water ejected from the micro-bubble generator connected the soft teeth-tray. The flow volume per second was then calculated, and the measurement was repeated 10 times for the average value. The dimension of the micro-bubbles was measured by photos taken with a high-speed camera. The micro-bubble generator was then connected to the fabricated nozzles and teeth-tray and was placed inside the box. The generator was turned on to eject water for 3 s. After the jet stream becomes stable, a high-speed camera (Mage Speed HHC X2) was used to photograph the jet stream for 1 s (1,000 frames/s). Of the 1,000 total photos taken, 500 (250th to 750th) were played back at slow speed with the Mega Speed AVI Player software. Of those, 10 clearer photographs are then selected to measure the bubble diameters, and the average value was taken as the representative value. From the filmed photos the position of a same bubble in 10 continuous photos was tracked, its distance measured to calculate the flow rate of the intermediate variable (M/S). The measurements of the statistics of control variables to flow volume, flow velocity, micro-bubble diameters are shown in Table 1.

Preparation of experiment and materials

The denture sample was created by a dental material company using adult tooth mold supplied and consisted of 14 false teeth (Good-Guys Dental Co., Ltd. Taiwan). The soft tooth-tray was made of medical silicone rubber with a hardness of 40 (Figure 1). The water ejection ports were fabricated corresponding to each tooth on the denture; holes were drilled on the bottom of the teeth-tray at an interval about 8mm between each tooth. There are 14 holes total with diameter of 1.6 mm.

To quantify the cleaning efficacy of micro-bubbles on dental plaques coated on denture, we collected bacterial strains from the clinical periodontal patients at a dental clinic. During sampling, a sterilized cotton swab was rubbed evenly around the oral cavity of the patient, and the collected samples were immediately placed inside a sterilized test tube. The samples were cultured using Sabouraud dextrose agar medium, and subsequently transfected to liquid medium.

The bacterial culture was then placed on an orbital shaker in the incubator, and cultured for 48 h in 37°C at a speed of 180 rpm. The dental plaque bacteria removal experiment was conducted in a sterilized laminar flow cabinet. The test denture was first sterilized and immersed in a 250 ml square container with solution containing 8 × 1010 cfu/ml (colonyforming unit) bacterial solution for 30 min and then dried for 60 min. During the removal experiment, the bubble generator was connected to the nozzle heads of specific pore diameters. The nozzle was then connected to the water inlet of the teethtray and then placed in a sterilized 500 ml container, which had a 6.8 cm platform to prevent the wastewater during the cleaning process from overflowing the denture and affecting the results. The teeth-tray then covers the upper jaw section of the denture with the teeth-surface facing downward. The micro-bubble generator was then set at the desired speed and turned on; the denture was then cleaned for 3 min. After cleaning was completed, the residual bacteria on the denture were then calculated based on the methods and steps from Lee et al. [9]. Briefly, the cleaned denture was placed in another sterilized glass dish, and dried for 30 minutes with the tooth surface facing upward. After drying, the occlusal surface of the teeth was printed onto agar for 30 s with desktop holder which could give the same pressure, and the dish was then set for 24 h at room temperature. The bacteria on medium dish were counted by colony counter.

The level of residual bacteria after cleaning was then compared with the bacterial level of an uncleaned denture. Therefore, we must first calculate the cfu on uncleaned dentures. The uncleaned dentures were pressed onto the medium dish for 30 s and then stored for 24 h at room temperature. The colony units were then counted with the colony counter. Cleaning efficacy was represented as percentage of colony removal; the method of calculation was as difference in cfu between uncleared and cleaned denture in percent. The estimation of bacterial removal in this study was not specific to a single strain, but rather to the total number of bacteria. Since there are many bacterial strains in the oral cavity, a single strain was not representative of the overall situation. In fact, due to the flat nature of the culture medium, only the occlusal surface of the teeth was estimated in this study. The denture was carefully sterilized after each test to make sure it is completely sterilized and then re-immersed in bacterial solution for the next test.

Correlation between the control variables and dental bacteria removal

In summary, our results showed that by restricting micro-bubbles in a confined space such as the teeth-tray, and allowing them to flow freely on the denture, the bubbles could help to clean dental bacteria. However, in the present study, a denture was substituted as the test subject instead of a real human oral cavity, and only the level of bacterial on the occlusal surface was used as cleaning indicator (residual bacterial level after cleaning), rather than taking into account also of the inner, outer and adjacent surfaces of the teeth. We hope to overcome this deficiency in the future by investigating with an actual human oral cavity, and to estimate the bacteria removal on all surfaces of the teeth, so that we may propose better solution on maintaining oral hygiene for long-term bed ridden patients.