The Efficacy and Safety of Argon Plasma Coagulation in Treatment of Radiation Proctitis.

Radiation proctitis, a form of colitis, occurs as a side effect of cancer radiation therapy to the pelvis. Hovewer there is no standard medical treatment with proven efficacy, endoscopic treatment such as argon plasma coagulation (APC) has been reported as en effective and safe therapeutic option. There is limited data about this treatment method belongs to our country. Therefore we aimed to analyze our patients with radiation proctitis treated by APC. 21 patients with radiation proctitis treated by APC were included in this retrospective study. The etiology, clinical features and clinical responses to APC sessions were analyzed. Two main criteria for application of APC were; insisting rectal bleeding and anemia. Fourteen women and 7 men (mean ages 60.6 and 61.8 respectively) were included in the study. Cervix carcinoma and prostat cancer were primary underlying malignancies. Average radiation colitis occurrence time and radiation dose were 13.2 months and 5600 cGy, respectively. Totally, 63 sessions of APC were performed (averagely 3. per patient) including in 5 patients only one session (23.8%), in 6 patients 2 sessions (28.5%) and in 10 patients 3 or more sessions (47.6%). Response to APC therapy was successful, frequency and severity of rectal bleeding decreased in 18 of 21 patients. On the other hand APC therapy was inefficient in three patients, but no serious complication was seen related to therapy. APC treatment for radiation proctitis could be a safe and effective therapeutic option.

Radiation proctitis, a form of colitis, occurs as a complication of cancer radiation therapy to the pelvis. It is visible in 15% of patients undergoing pelvic radiation therapy [1]. Acute form; is seen during treatment or within the first 3 months after the treatment and self-limiting. Chronic form; is clinically more important and seen within the first two years after the treatment [2]. The exact pathophysiology is unknown; but obliterative endarteritis and chronic mucosal ischemia due to fibrosis are suspected pathways [3]. The most frequent endoscopic findings are telengiectasies in different sizes and the most common clinical presentation is rectal bleeding [4].

Medical or pharmacological methods are usually ineffective or have limited effects in treatment of radiation proctitis.

A total of 21 patients who were referred to the outpatient clinic of the Department of Internal Medicine, Division of Gastroenterology at Gaziantep University Hospital between January 2006 and January 2012 with diagnosis of radiation colitis, were included in this study. The patients’ demographic characteristics, given radiation dose, time of occurrence of colitis and the results of APC process were analyzed retrospectively.

Only enema was given to patients as preparation before the procedure and all procedures were performed by experienced endoscopists. For APC process; front and side firing with 2.3 mm diameter probes, argon gas sources and high frequency portion of unit ERBE APC generator (Tubingen, Germany) were used. 50 W (40-60) average powers during the procedure and the average gas flow rate of 1.5 L/min (1.2-2) were performed in order to reduce the tension of the bowel, frequently gas given and air was aspirated. For diagnosis typical medical history and endoscopic appearance were sufficient, therefore biopsy was not performed routinely. The study was approved by the Local Ethics Committee of Gaziantep University Faculty of Medicine Hospital.

Criteria for APC application were insisting rectal bleeding and anemia. In five patients (23.8%) transfusions were needed because of deep anemia before the endoscopic procedure. The colorectal allocations of the disease were proctitis-proctosigmoiditis in 18 patients (85.7%) and only sigmoiditis in 3 patients (14.3%). The most frequent endoscopic evidence of radiation colitis was telengiectasia. In 21 patients APC were performed 63 sessions totally (with the average of 3 sessions per patient) with following frequency; one session of APC in 5 patients (23.8%), 2 sessions in 6 patients (28.5%), 3 or more sessions in 10 patients (47.6%). In one patient eleven sessions of APC were performed due to of recurrent bleeding. In this patient; the interval between the sessions gets longer and transfusion requirement was significantly decreased by recurrent sessions. In patients receiving two or more sessions; procedure is usually performed twice a week in the form of consecutive sessions. In each session, averagely 70% of lesions underwent APC. Response to APC therapy was successful, frequency and severity of rectal bleeding decreased in 18 of 21 patients. On the other hand in three patients APC therapy was inefficient. Perforation, stricture or procedure induced bleeding was not seen in any patient after procedure. But there were rectal pain and distension in 4 patients and recurrent bleeding in one patient which was controlled with second session of the APC.

The interval between radiotherapy and appearance of symptoms was changing from 4 to 24 months (mean interval time 13.2 months). The dose of radiation was between 3000 to 7600 cGy (mean dose 5640 cGy). The treatment of radiation proctitis by APC is demonstrated in figure 1. 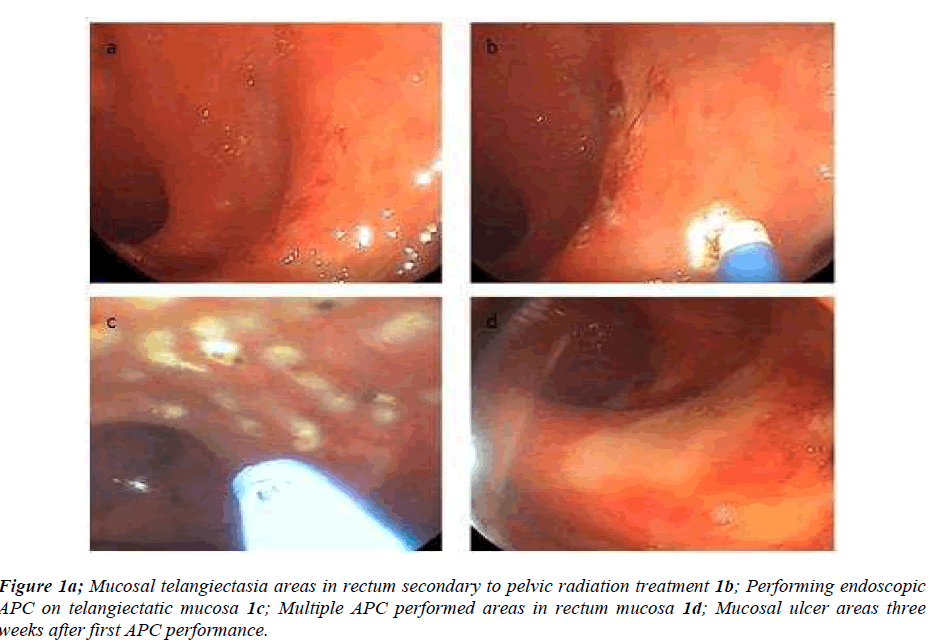 Present study confirmed that APC as a safe and effective method in treatment of radiation proctitis in consistent with previous studies.

Although APC is not accepted as a standard treatment option for the radiation proctitis; but it has been performed more commonly day by day. In literature; there are some studies reporting the efficacy and safety of APC. Sato et al. reported the result of their prospective study of 65 patients which was demonstrating that the success rate of APC 98.5% [7]. They followed-up the cases for 34.6 months and no side effects or complications were observed, moreover 93% of patients remained in remission. Swan et al. demonstrated that APC therapy was effective in 68% patients for only one session and 96% in two sessions in 50 patients with radiation proctitis including 16 patients which were resistant to other treatments [10]. They mentioned that success rate was 96% with the 1.36 session meanly. It seems that a high response rate might be related with the study group of which 80% of the patients were with mild and moderate disease. Karamanolis et al showed that only one APC session was successful in all the 27 patients with mild disease and 23 of 29 patients with moderate diseases [6]. According to previous studies most important factor affecting the success rate of APC treatment in radiation proctitis is the severity of colitis [3,10]. The efficacy of APC is decreased in severe colitis compared to mild and moderate cases. Present study’s success rate result was close previous studies.

Other than APC antidiarheal agents, antibiotics, 5-ASA preparations, sucralfate, estrogen preparations, antioxidants such as vitamin-E, hyperbaric oxygen therapy, formaldehyde (which cause to tissue necrosis) were shown to be effective in treatment of the radiation proctitis [5,11,12]. Alfadhli et al compared APC and formalin treatment in 21 patients [12]. In 10 patients only APC, in 8 patients just formalin and in 3 patients both APC and formalin treatment were given and in APC group 78%, in formalin group 27% treatment success has been achieved [12]. Tjandara et al; applied APC treatments in 12 patients who did not respond to treatment with formalin and followed up 11 months these patients [13]. After applying 2 APC sessions; 10 patients had a significant reduction in bleeding and complete remission was obtained in 6 patients [13]. As comparing APC with other methods of endoscopic therapy- heater probe or bipolar coquetry- it is superior because of performing fastly on larger areas with lower side effect risk [14]. Treatment options other than the APC were suggested in cases where there is no argon plasma unit or the use of APC is ineffective or contraindicated. Treatment options one considered missed; fistula or stenosis in patients with structural may be applied by surgical options [15].

While different periods of time are revealed with the emergence of colitis, the majority of the cases occur in 4- 24 months after radiotherapy [6,10,16,17]. There are also several reported cases occurred 30 years after radiotherapy [18]. Due to close proximity; the most affected segment of the colon is rectum [4,16]. In this context our study results were similar to previous studies within median 12-month occurrence and with a 85.7% percent rectal involvement.

Applied radiation dose, dose range and administration method are major factors influencing the development of proctitis [19]. Smith et al. reported that the incidence of radiation colitis is 20% and 60%; when the radiation dose is up to 7500 cGy and exceeds 7500 cGy respectively [20] but the average radiation dose was 5460 cGy in present study.

In conclusion; radiation proctitis is a common condition after pelvic radiation therapy. Although there are some alternative treatments, APC applications have been used increasingly. The results of our study are similar to previous studies in literature indicating that APC is a safe and effective method in treatment of radiation proctitis. 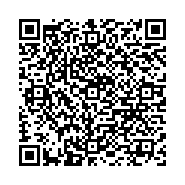