Objective: To investigate the effect of the Zhikang capsule on the growth and apoptosis of breast cancer cell line MCF-7.

Conclusion: The Zhikang capsule could inhibit the growth of MCF-7 cells in vitro, and the inhibitory effect showed the time effect and dose effect relationship; and it could promote the apoptosis of breast cancer cells by blocking the cell cycle in the G2/M phase.

The Zhikang capsule was composed by 14 kinds of traditional Chinese medicines including Rhubarb, Coptis chinensis, pseudo-ginseng, radix angelicae, donkey-hide gelatin, fossil fragments, common Bletilla tuber, stir-baked Myrrha with vinegar, cuttle-bone, madder, resina draconis, liquorice, pearl, borneol. It had the function of heat clearing and hemostasis, Qufushengji, relieving pain, promoting tissue repair and shorten the time of wound healing. It was more common to find the skin flap necrosis, infection and subcutaneous effusion after modified radical mastectomy for breast cancer. Once the wound healing time was prolonged, it would bring unnecessary pain to patients, prolong the length of stay, increase the economic burden and delay the implementation of other treatment options. Over the years, surgeons have been actively looking for effective ways to promote wound healing. Through the literature we knew that Zhikang capsule can promote the healing of the wound, but it was rarely used in skin flap in patients with breast cancer healing reports. In this study, in vitro culture of breast cancer cell line MCF-7 cells were as the research object, then we observed the effect of the Zhikang capsule on the growth of MCF-7 cells, and it provided a new treatment for breast cancer patients with wound healing.

MCF-7 cells were cultured in H-DMEM culture medium containing 10% fetal bovine serum under the condition of 5% CO2 and 37°C. Liquid was changed 1 time every 24 h. MCF-7 cells were digested with 0.25% trypsin solution during the logarithmic growth phase. The experimental group were respectively added 0.5, 1, 2.0 mg/ml of the Zhikang capsules 200 μl, the control group were added the same amount of culture fluid, then each hole was added MTT (5 mg/ml) 20 μl after the culture of 24 h, 48 h, 72 h. Each hole was added with 150 μl DMSO, and oscillated for 10 min, and the value was measured by the enzyme standard instrument in the 490 nm absorbance (A). The experiment was carried out 2 times, and taken the average (A) value of the 2 results. Cell growth inhibition rate=(control group A value-treatment group A value)/control group A value × 100%.

MCF-7 cells were inoculated in the culture bottle, and divided into control group and 0.5, 1, 2.0 mg/ml of the capsule groups. The control group was added with an equal amount of 10% fetal calf serum containing high glucose DMEM complete medium. Cell cycle distribution was analyzed by computer software and flow cytometry.

MCF-7 cells were inoculated in the culture bottle, and divided into control group and 0.5, 1, 2.0 mg/ml of the capsule groups. Each tube was added 195 μl Annexin-V-FITC binding buffer solution and 5 μl PI solution. It was detected by Flow cytometry, and the data was processed and printed by computer. The experiment was repeated 3 times.

Table 1. The effect of different concentrations of the Zhikang capsule on the proliferation inhibition rate of MCF-7 cells. 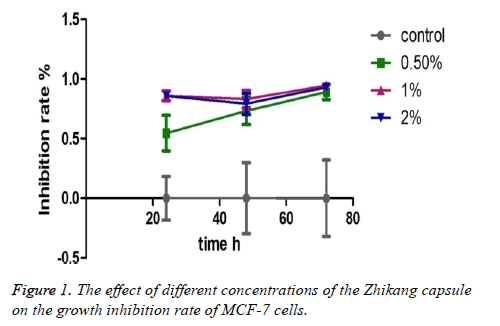 Figure 1: The effect of different concentrations of the Zhikang capsule on the growth inhibition rate of MCF-7 cells.

After treatment 48 h by Zhikang capsule, the apoptosis rate of the cells was significantly increased.

The anti-tumor mechanism of traditional Chinese medicine has many aspects. Such as, inhibition of DNA synthesis, inhibition of tumor angiogenesis, inducing cell differentiation, promoting cell apoptosis, regulating the body's immune function, inhibiting protein tyrosine kinase (tyrosine kinase protein, PTK) activity, etc. [1-4]. The Zhikang capsule was composed by Rhubarb, Coptis chinensis, pseudo-ginseng, common Bletilla tuber and had the function of heat clearing and hemostasis, Qufushengji, relieving pain, promoting tissue repair and shorten the time of wound healing. It was confirmed by several experiments that Bletilla had antitumor activity. Aijing screened compounds extracted from Bletilla striata [5]. She found that the compound 1 was consistent with oleanolic acid-3-O-α-L-rhamnose-(1→2)-β-D- glucopyranoside and had some anti-tumor activity. It made the theoretical basis of Bletilla anticancer activity to be more confident. After the cell cycle was detected by flow cytometry, it was found that compound 1 could block the cell cycle in the G0/G1 phase and the synthesis of DNA. At the same time, there was a significant sub-G0/G1 peak in after compound 1 acting on lung adenocarcinoma cell A549 cells for 24 h, which showed that the compound had the function of promoting the apoptosis of A549 cells. Bletilla also had the function of inducing apoptosis of tumor cells. Xuefen used 95% ethanol reflux to extract of Bletilla [6]. System solvent extraction method divided ethanol extract from Bletilla striata into petroleum ether layer, chloroform layer, ethyl acetate layer, butyl alcohol layer and water layer. CCK8 method was used to screen the active site of growth inhibition, and the effect of the active site on the apoptosis of mouse melanoma B16 cells was studied by fluorescence microscopy and flow cytometry analysis. The results showed that Bletilla chloroform and ethyl acetate layer inhibited on the growth of mouse melanoma B16 cells. The results showed that Bletilla chloroform layer could effectively induce B16 cell apoptosis. The results of this study showed that: the Zhikang capsule had a significant inhibitory effect on the growth of MCF-7 cells in the breast. With the increase of the concentration of the drug action and the extension of the action time, the inhibitory effect was time and concentration dependent.

The effect of promoting wound healing and hemostasis by Zhikang capsule has been widely affirmed [7,8]. Pharmacological studies showed that the main component of Zhikang capsule was rheum officinale, pseudo-ginseng and Bletilla. The pseudo-ginseng contained Panax Notoginseng Saponins, flavonoid glycoside and alkaloid, and had the function of hemostasis, analgesia and repair of mucous membranes. Bletilla contained the Bletilla hyacinthina gum. Bletilla striata polysaccharide could promote the growth of granulation tissue, capillary regeneration, and increase the wound exudate polymorphonuclear white cells and fibroblasts, and it was conducive to the wound to stop bleeding, repair and anti-infection [9-12]. Further study showed that Bletilla striata polysaccharide could increase the mRNA expression of macrophage inducible nitric oxide synthase, TNF-α and IL-1β and enhance the expression of these cytokines. The recent study found that the effective ingredients of Bletilla striata not only had the function of mechanical obstruction in the blood vessel, but also played a role in promoting blood coagulation and preventing the revascularization of the tumor [13]. It was confirmed that Bletilla had inhibitory effect on tumor growth of tumor bearing rabbit and Bletilla could inhibit tumor growth and narrow the tumor.

In conclusion, at the same time Zhikang capsule could promote the wound healing; it also might inhibit the tumor growth by blocking the cell cycle, inducing apoptosis, enhancing the expression of TNF-α and inhibiting tumor angiogenesis. It provided strong evidence for the application of Kang capsule in the wound healing after breast cancer surgery, but the specific molecular mechanism needed further study.