Methods: Twenty-four adult male Sprague-Dawley (SD) rats were randomly divided into the control group (A1 group), lactate Ringer's solution resuscitation group (A2 group) and anti-TNF-αMcAb resuscitation group (A3 group). A knife was used to cut about 5 cm in the middle of abdomen in rats of the A2 and A3 groups. Animal models of traumatic hemorrhagic shock were established through the femoral artery bleeding. The A2 group was treated with lactate Ringer's solution resuscitation, A3 group was treated with lactate Ringer's solution resuscitation containing anti-tumor necrosis factor-α monoclonal antibody (3 mg•kg-1), while the A1 group was under the same conditions without blood loss and trauma. The contents of Superoxide Dismutase (SOD) and Malondialdehyde (MDA) in myocardium were measured. The levels of serum TNF-α and CK-MB were detected in every group. The pathological changes of myocardium were observed by light microscopy.

Traumatic Hemorrhagic Shock (THS) is a common severe disease in emergency treatment, featuring heavy injuries and rapid changes which can lead to cardiac arrest and other vital organ damage [1]. Medical staff has been in continuous exploration on how to reduce traumatic hemorrhagic shock damage to vital organs, maintain vital organ function, and improve the shock effect of the treatment, however studies are still need to give more clinical and experience data in this field.

Studies have showed that Tumor Necrosis Factor-α (TNF-α) plays an important role in the development of shock caused by many factors, such as zymosan-induced shock [2] and endotoxic shock [3]. And anti-TNF-α Monoclonal Antibody (McAb) is also proved to be effective in protection against shock [4,5]. Though there are numerous studies on this topic, more clinical and experimental data is still helpful in further reveal the mechanism of THS.

The present study aimed to investigate the effects of TNF-α and its monoclonal antibody on myocardial injury in SD rat with THS through different fluid resuscitation in the SD rat THS model.

Clean grade adult male SD rats were not fasted before surgery, and given free access to water. Skin preparation was performed on the neck and left groin region. Then rats were anesthetized by an intraperitoneal injection of 10% urethane (1 ml/100 g). After obtaining satisfactory anesthesia, rats were fixed on operating table. After povidone-iodine disinfection, the right external jugular vein was connected to an infusion pump. An incision which was about 5 cm in length was made in the rat abdomen, creating body injuries in rats. Before catheterization, the catheter was rinsed with heparin (25 U). An animal model of hemorrhagic shock was made by bleeding via left femoral artery catheterization. Carotid arteries were used for connecting the biological signal acquisition system (Nanjing Meiyi Co., Ltd., Model: MedLed). Blood pressure was checked. Through the femoral artery bleeding, blood pressure was lowered to the mean arterial pressure of 40 mmHg within 10 min. The blood pressure was maintained for 60 min.

Rats were sacrificed 2 h after the end of anti-shock resuscitation, and blood was collected via abdominal aorta. Serum was preserved in a -70°C refrigerator for the sake of detecting TNF-α and creatine kinase (CK-MB) levels. Two myocardium tissues of left ventricular were selected. One tissue was washed with physiological saline, and then stored in a -20°C refrigerator. The other tissue was prepared for pathological examination.

The measurement data was expressed by mean ± SD. Independent continuous variables were compared using the t-test. When P-value was less than 0.05 it was considered to be statistically significant. All calculations were made using SPSS 18.0.

Table 2. Comparisons among MDA and SOD levels in myocardium SD rats in each group (͞x ± S). 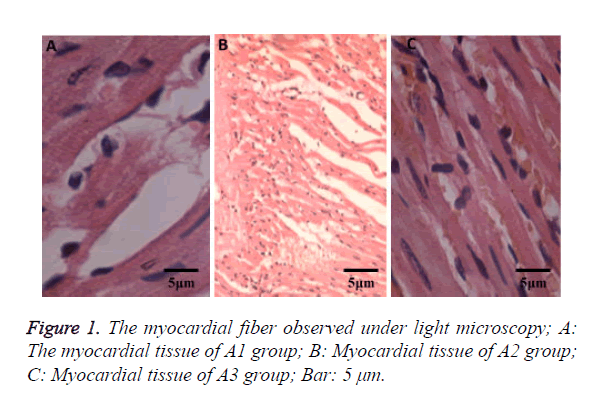 Trauma [9] refers to the damage of the integrity of body which is caused by external forces and other factors, and ranks as No. 5 killer in China. In 2012, up to 500 million deaths worldwide were resulted from trauma [10]. It is estimated that 40 percent of patients with trauma will die from Hemorrhagic Shock (HS) in 2020 [11]. Early symptom of THS is still hypovolemic shock. Timely infusion and restoring blood volume of the body are the basic life-saving measures [12]. THS is a state characterized by microcirculation disorder. Rapid loss of blood volume which occurred after body injuries causes hemodynamic instability, inadequate blood perfusion, reduction in blood and oxygen supplies as well as ischemia and hypoxia, dysfunction of tissues and cells, eventually leading to death [13].

THS can cause myocardial damage. In this experiment, we studied the effects of TNF-α and its monoclonal antibodies on myocardial injury in SD rats with THS using SD rat THS models which were established by abdominal incision in SD rats combined with bloodletting. This study will provide the basis for clinical treatment.

A study has shown that toxic effects of endotoxin are exerted mainly through TNF-α which serves as a "link". TNF-α plays a key role in myocardial injury of rats with sepsis [14]. TNF-α not only mediates a variety of biological toxicity of endotoxin, but also contribute to a cascade out of control, forming a complex network system, and causing inflammation that can lead to organ dysfunction [15].

Heart is not only an important target organ of TNF-α, but a place where TNF-α is produced. Studies have shown the following TNF-α toxicities: 1. TNF-α can lead to uncoupling and degradation of cardiac troponin, resulting in reduced contractility. 2. TNF-α can prompt myocardial cells to produce reactive oxygen species which destroy the cell membrane integrity. 3. TNF-α can promote myocardial apoptosis, causing ventricular remodeling and arrhythmia, and is involved in cardiac remodeling, resulting in heart failure. 4. TNF-α can promote the proliferation of fibroblasts, leading to decline in myocardial compliance. 5. TNF-α can induce lysosomal enzyme release [16], destroying myocardial electronic transfer system and the function of mitochondria, and leading to the production of new radicals [17]. An excessive amount of radicals can reduce the GSH-Px activity in the serum, and subsequently reduce the antioxidant capacity and radical scavenging capacity, promoting lipid peroxidation and damage of biomembranes [18]. 6. TNF-α can cause the formation of microthrombosis in myocardial vessels, microcirculation disorders and dysfunction [19], leading to myocardial necrosis. 7. TNF-α cam promote the production of chemokines and secondary inflammatory cytokines, which activate endothelial cells, and promote the expression of adhesion molecules. 8. TNF-α can induce the transient considerable rise in cardiac Ca2+ [20], causing myocardial hypertrophy [21], and ultimately bringing about decreased myocardial contractility, and heart dysfunction.

Antioxidant levels and the antioxidant enzyme system are vulnerable to multiple factors [22]. SOD is a kind of oxygen free radical scavenger, and MDA may reflect the degree of lipid peroxidation. SOD and MDA contents in myocardial tissues can reflect the extent of tissue damage. Although fluid resuscitation preformed after THS can improve myocardial blood supply, it aggravates myocardial ischemia-reperfusion injuries, and even leads to myocardial infarction. Cascades mediated by TNF-α and other molecules play an important role in myocardial ischemia-reperfusion injury.

In this experiment, TNF-α and CK-MB in the serum, and MDA contents in myocardial tissues in the A2 group significantly increased while SOD significantly reduced. Inflammatory cell infiltration appeared in cardiomyocytes, with thinner myocardial fibers and myocardial fiber necrosis. A study has found that TNF-α toxicities can be completely blocked by its monoclonal antibody [23]. In this experiment, compared with the A2 group, TNF-α levels in the A3 group significantly reduced (P<0.05) with reduced CK-MB in the serum, increased SOD contents, decreased MDA in myocardial tissues (P<0.05), and mitigated myocardial damages. These results indicate that TNF-α plays an important role in THS, and that its monoclonal antibody have a protective effect on myocardial tissues. The mechanism is possibly related to the antagonism of TNF-α toxicities.