Preimplantation genetic diagnosis (PGD) involves in vitro manipulations as well as genetic screening. In vitro manipulations include biopsy, embryo culture and if needed, cryopreservation of embryos is opted. Embryos that are subjected to PGD should never be adversely affected by in vitro interventions and must subsequently be able to develop into normal and healthy individuals.

Biopsy of embryos in PGD programs is generally done at the 8-cell stage as it has been reported that biopsy at the 8-cell stage has less detrimental effect on subsequent in vitro development [1], compared with the 4-cell embryos and morulae. Biopsy size has been seen to affect surviv-ability of embryos [2]. Several authors have found that more than 90% of embryos developed into blastocysts after one- and two-blastomere biopsy [2,3,4], but signifi-cant reductions were observed after three to five blas-tomeres were biopsied [2]. Several types of biopsy may be performed, depending on the availability of equipment. Bisection of embryos may be performed using a micro-blade attached to a micromanipulator [5,6,7]. This method has been utilized on livestock embryos before the intro-duction of blastomere biopsy technology in PGD. How-ever, the setback part is the biopsy size which is difficult to control, especially when the biopsy is performed on embryos of smaller animal species.

Currently, blastomere biopsy is the method of choice, as it is more efficient in controlling the biopsy size. Different techniques are adopted in the partial removal or disrup-tion of the zona pellucida before blastomere aspiration is performed. The simplest method uses two microcapillaries for biopsy. The first capillary is used as a holding pipette for the embryo and the other capillary is used to mechanically puncture the zona (zona drilling) followed by blastomere aspiration. This simple method has been adopted in several studies, as it shortens biopsy time [4,8,9]. Other researchers have preferred to partially digest zonae using an acidic medium, such as acidic Ty-rode’s solution [10,11,12]. This type of set-up requires three microcapillary tools. The first tool is used to hold the embryo in place. The second and the third tools are used, respectively to chemically breach the zona with acid and to aspirate blastomeres.

Cryopreservation of biopsied embryos is also required when genetic diagnosis requires a substantial amount of time, or when recipients are not readily available. Cryopreservation methods may be divided broadly into slow freezing and vitrification [13].

Slow freezing involves slow cooling of embryos before storage in liquid nitrogen. This method has been used in several early studies [14,15,16,17].

Embryos were collected from 6 to 8-week-old ICR mice. Mice were superovulated by intraperitoneal injection of 10 IU pregnant mare serum gonadotropin (PMSG; Folli-gon, Intervet, Netherlands) followed by 10 IU human chorionic gonadotropin (hCG; Chorulon, Intervet) at 48 h apart. Treated females were then cohabited overnight with a single male of proven fertility, at a ratio of 2:1. The next morning, females with vaginal plugs were selected as embryo donors.

Eight-cell embryos were flushed out of oviducts on day 3 post coitum and each of them were transferred to individual 10-μl drops of calcium-magnesium free M2 (CMF-M2) [22]. One- or two-blastomere biopsies were carried out using the TransferMan® NK 2 (Eppendorf, Germany) fully automated micromanipulator which was mounted on an inverted microscope (Leica DMIRB, Germany) with an in-built heating stage. All microcapillaries were obtained from Eppendorf, Germany. Holding pipettes (VacuTip, Eppendorf) had an inner diameter of 40 μm and outer diameter of 100 μm. Zona drilling tips had an inner diameter of 5 μm and embryo biopsy tips had an inner diameter of 25 μm with a 30-degree angle. A small aperture was then drilled in the zona pellucida using the zona drilling tip containing acidified Tyrode’s solution. Once the hole was drilled, gentle suction was used to draw the blastomere into the tip.

Percentages of embryos developing to morula, blastocyst and hatched blastocyst after biopsy and cryopreservation treatments were recorded as an indicator of embryo vi-ability.

Results of in vitro embryonic survival rates after biopsy and cryopreservation are given in Tables 1 and 2 and also presented in Figure 1. 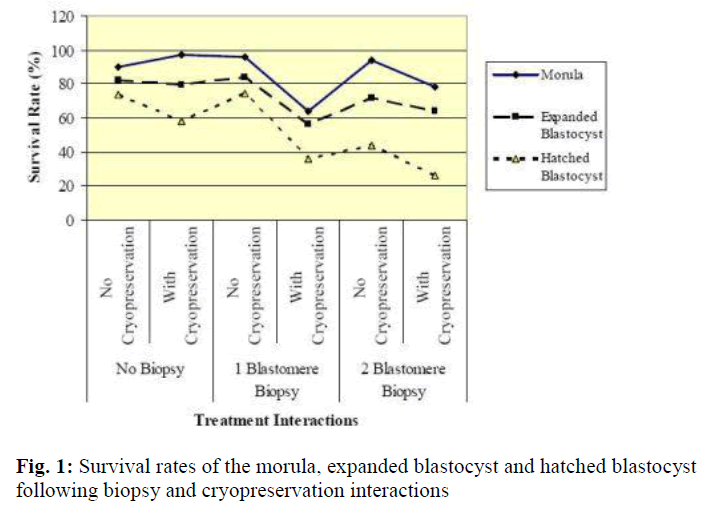 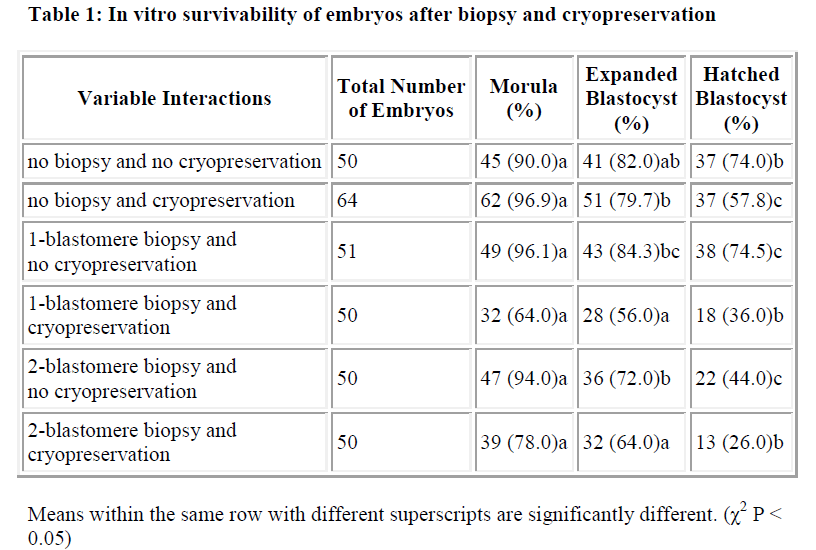 Table 1: In vitro survivability of embryos after biopsy and cryopreservation 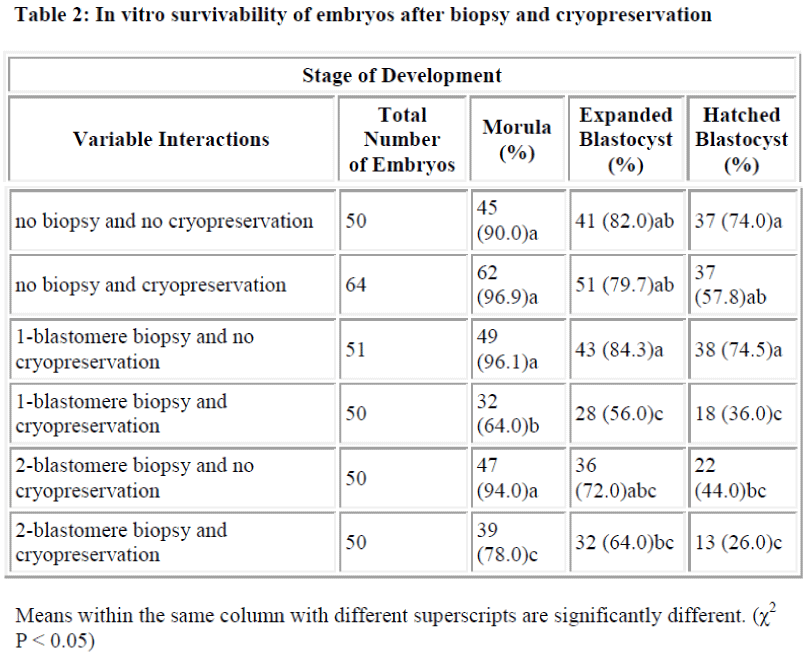 Table 2: In vitro survivability of embryos after biopsy and cryopreservation

In vitro survivability of embryos generally declined with the advancing stages of development, irrespective of the treatments (Table 1 and Figure 1).

In summary, one-blastomere biopsy without cryopreservation yields the highest development into the morula, expanded blastocyst and hatched blastocyst (96.1%, 84.3% and 74.5%, respectively).

It has been demonstrated that the intact and biopsied mouse embryos can successfully be cryopreserved using the blastomere biopsy and vitrification procedures. Both blastocyst formation [1] and hatching rates [25] have been cited as criteria to evaluate the influence of biopsy on the embryo, but the rate of hatching has been suggested as a reliable method to reflect operator’s skills following embryo biopsy [25].

In this study, expanded blastocyst development after two-blastomere biopsy was not found to be significantly dif-ferent from the control. This is in agreement with the finding that biopsy of two blastomeres does not reduce the development of 8-cell embryos to the expanded blastocyst [1]. However, it has been shown that removal of more than three blastomeres from 8-cell embryos significantly impairs the next stage of its development. After biopsy of seven blastomeres, none of the surviving embryos developed into blastocysts [2].

In current PGD practice, the removal of two blastomeres is recommended because of mosaicism [25] and anucleation of blastomeres [26]. In cases of mosaicism, a single cell taken from an embryo may not be an accurate genetic representation of the rest of the embryo [25]. Incidence of anucleation in blastomeres has been reported to be about 2 percent [26]. Therefore, although minimal, there is a risk that a biopsied blastomere may be anucleated. In that case, the genetic testing cannot be carried out.

However, it is important to note that the experimental data differ as the experimental procedures adopted by the investigators are not absolutely identical. Moreover, in biopsy and cryopreservation experiments, inter laboratory variation also plays a crucial role in determining the out-come.

This study was funded by a short-term research grant from the Institute of Research, Development and Commercialisation (IRDC), Universiti Teknologi MARA. Our deepest appreciation to the Dean of the Medical Faculty, Dean of the Faculty of Applied Sciences and Head of the Institute of Medical Biotechnology, Faculty of Medicine, Universiti Teknologi MARA, for their support.