Objective: To investigate the effect of Wulongdan on the expression of P2X7 receptor (P2X7R) in the cerebral cortex and on neuroinflammation after Subarachnoid Hemorrhage (SAH) in rats.

Methods: A reliable SAH model was established by double injections of blood into cisterna magna in rats. Fifty-four adult Sprague-Dawley rats weighing 220 plus or minus 20 g were divided into three groups by randomized sorting method: Sham, SAH and Wulongdan (n=18 each). The levels of Tumor Necrosis Factor alpha (TNF-α) and Interleukin-1β (IL-1β) were measured by ELISA analysis. The expression of P2X7R in the cerebral cortex was tested by immunohistochemical and Western blot methods.

Results: Compared with those in the Sham group, the levels of TNF-α and IL-1β in the cerebral cortex were significantly up-regulated at each time point after SAH (P<0.05), with the peak occurring at 24 h. Compared with SAH group, the expressions of TNF-α, IL-1β and P2X7R were down-regulated in Wulongdan-treatment group (P<0.05).

Conclusion: Wulongdan could attenuate neuroinflammation in the cerebral cortex after SAH in rats, which may be associated with the down-regulation of P2X7R protein.

Subarachnoid Hemorrhage (SAH) is caused by intracranial aneurysm rupture that leads to the sudden entry of blood into the subarachnoid space. Though a common cerebrovascular disease, SAH has a higher disability rate and mortality than other similar diseases [1]. Many fundamental researches have been conducted over SAH [2-6].

After the sudden entry of blood into the subarachnoid space, the disintegration of blood cells will trigger the cascade release of a large amount of immune-inflammatory mediators, such as 5-HTP, histamine, bradykinin, Interleukin-1 (IL-1), IL-6, and Tumor Necrosis Factor (TNF). Studies show that the inflammatory response mediated by cytokines such as IL and TNF is involved in the pathophysiological processes of secondary brain injury [7].

ATP is the only natural agonist of P2X7R, which is highly selective on bivalent cations. Low-concentration P2X7R agonist can mediate the influx of Na+ and Ca2+ and the efflux of K+, activating phospholipases A2 and D as well as the Mitogen-Activated Protein Kinase (MAPK)/ nuclear factor kappa B (BF-ĸB) signaling pathways; moreover, it can induce the generation and release of IL-1β, IL-6 and TNF [10]. P2X7R-mediated K+ efflux is an important signal for inflammasome assembly, and it can activate the calcineurin-nuclear factor of activated T-cell signal transduction pathway, such as cyclooxygenase-2 and inducible nitric oxide synthase. However, the repeated or prolonged stimuli with P2X7R agonist can lead to the formation of non-selective membrane channels that permit the entry of molecules as large as 800 Da, leading to cell death [11]. Therefore, P2X7R is also known as the death receptor.

P2X7R is widely expressed in the neurons and on the surface of the astrocytes and microglial cells of the central nervous system, and plays a role in neurotransmitter release and gliocyte activation. Being regulatory of several signaling pathways related to pathology, P2X7R is considered the new target for the treatment of nervous system diseases such as ischemic stroke, traumatic brain injury, Alzheimer's disease, spinal cord trauma and neuropathic pain [12-15]. P2X7R knockout and the use of P2X7R antagonist can significantly improve the pathological changes and symptoms in vitro or in animal experiments. However, the role played by P2X7R after SAH is rarely known, and the effect of P2X7R on neuronal apoptosis, neuroinflammation and pathophysiological processes following SAH requires further investigation.

Fifty-four adult Sprague-Dawley rats weighing 220 plus or minus 20 g were divided into three groups by randomized sorting method: Sham, SAH and Wulongdan, with 18 rats in each group. The rats were provided by Laboratory Animal Center of Nanfang Hospital, Southern Medical University (license No.: scxk (Guangzhou) 2011-0015). The rats were acclimatized for a week in a Specific Pathogen-Free (SPF) environment.

Wulongdan was prepared by Nanfang Hospital, Southern Medical University and the main ingredients were Polygonum multiflorum, earthworm, Salvia miltiorrhiza, Astragalus mongholicus and Acori Graminei Rhizoma. 1 g of extract was equivalent to 2.67 g of crude drug. The concentration of the extract was 1 g/ml. The treatment group was given crude drug by gastric irrigation at a dose of 8.8 g/kg/d twice daily, for 5 days in total.

Grouping and construction of SAH models

Intraperitoneal injection was performed with 10% chloral hydrate at a dose of 3 ml/kg. The anesthetized rats were immobilized to the operating table in a supine position. The skin of the neck and the right femoral artery was prepared and disinfected. Blunt dissection of the right femoral artery was performed and 0.3 ml of blood sample was collected. Then the rats were transferred to a prone position. Under stereotaxic guidance a needle was inserted vertically to a depth of about 1 mm. The atlantooccipital membrane was punctured and 0.1 ml of the cerebrospinal fluid was drawn. The blood was slowly injected into the cisterna magna using a microinjection pump. After that, the needle was withdrawn and the puncture was sealed with bone wax. The incision was sutured and the skin was disinfected again after surgery.

The levels of TNF-α and IL-1β in the cerebral cortex of each group were detected by ELISA according to the manufacturer’s instructions.

Levels of IL-1β and TNF –α in cerebral cortex

Localization of P2X7R in the cerebral cortex

Levels of P2X7R in the cerebral cortex 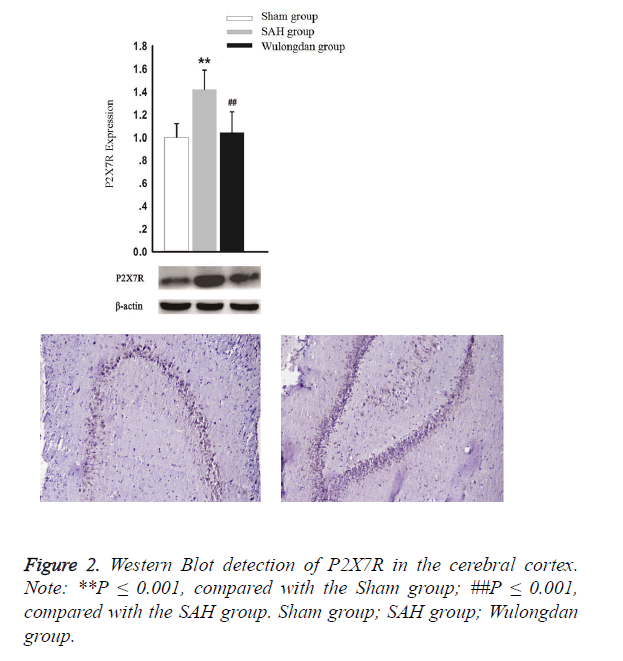 Dumont et al. believed that the inflammatory cytokines in the cerebrospinal fluid after SAH are closely associated with the changes in cerebral blood flow [17]. The increase in the expression of IL-1β and TNF-α after SAH may lead to neuronal death, thus aggravating brain damage after SAH. Feng et al. indicated the increase in the level of IL-1β after SAH in rats and that the extent of variation was directly proportional to the severity of cerebral edema. IL-1β may be involved in cerebral edema after SAH [7]. Ji et al. [18] also suggested that inflammation is involved in post-SAH brain damage. Therefore, reducing the release of IL-1β and TNF –α after SAH is crucial for relieving the brain damage [19]. IL-1β as a proinflammatory cytokine is involved in the proliferation and differentiation of T-cells and B-cells and it contributes greatly to enhancing the activity of the neuroinflammation factors. As the level of IL-1β increases in the presence of brain damage, ischemia and hypoxia, both neurons and non-neurons will be damaged. TNF-α can induce the release of arachidonic acid metabolites and the generation of lipid peroxide and oxygen free radicals, which leads to severe damage of cell membrane and alteration of cellular functions [20].

We built the SAH model in rats by double injection of blood into the cisterna magna. The levels of IL-1β and TNF-α in the cerebral cortex were detected using ELISA within 72 h after SAH. The severity of neuroinflammation and dynamic changes of the inflammatory cytokines in the early stage of SAH were observed. It was found that the levels of IL-1β and TNF-α increased significantly at 6 h after SAH, with the peak occurring at 24 h. Similar variation pattern was found with P2X7R.

Wulongdan is the clinical empirical formula invented by famous TCM physician Prof. Zang Kungtang. The fourteen ingredients of the formula include Astragalus mongholicus, Kudzu's root, Polygonum multiflorum Thunb, Ligusticum wallichii, Salvia miltiorrhiza, earthworm, scorpion, Bombyx batryticatus, leech, sun-dried ginseng, Acori graminei Rhizoma, Fructus ligustri lucidi, Rhizoma atractylodis Macrocephalae and Rhizoma atractylodis Macrocephalae. The combined use of these ingredients can result in the effects of benefiting qi for activating blood circulation, invigorating the kidney and filling the marrow, and dispelling blood stasis and clearing the collaterals. This formula is commonly used to treat ischemic encephalopathy with high efficacy. The existing studies have shown that Wulongdan can improve the sequelae after cerebral infarction via different pathways. However, the effect of Wulongdan on post-SAH brain dysfunction and the working mechanism remain unclear.

Wulongdan can decrease the expression of P2X7 and the release of inflammatory cytokines (TNF-α and IL-1β) after SAH, which prevents further damage to the cerebral cells caused by the inflammatory response. This may be the mechanism of the cerebral protective effect of Wulongdan in SAH rats. However, considering the complex pharmacological ingredients in TCM prescription, the specific protective mechanism of Wulongdan against cerebral vasospasm after SAH requires further investigation.