Results: Compared with I/R group, both of RPJEL and RPJEH groups could significantly decrease the Drp-1 and Caspase 3 protein level, and also minimize the infarct volume. Two hours after the infarct model established, the blood flow of I/R group were changed to 30.26% ± 1.58%, and the blood flow of the RPJEL and RPJEH groups were decreased to 52.1% ± 2.94%57.3% ± 4.21%.

Conclusions: RPJE could effectively inhibit the nerve cell apoptosis and mitochondria. The action mechanism may be related to the decreased levels of Drp-1 and Caspase 3.

Mitochondria are an important place for energy metabolism in cell, and also the most possible organelles in the early phase of ischemia. Studies have shown that Drp-1 is important executive mediated mitochondrial fission molecular [1]. Caspase 3 is a sensitive index of the cell apoptosis and the key enzymes of Caspase cascade and executives [2]. Rhizoma Panacis Japonici has root dry, strong body, promoting blood circulation and removing blood stasis, relieve swelling and pain and so on [3]. In recent years, studies showed that cell apoptosis and necrosis ischemic was finished through the two way, quite part of the vessels could recanalized after treatment, the neuron apoptosis is the main form of ischemia half dark belt damaged, the reperfusion injury is inevitable, infarction and expanding, the main reasons may be caused by Drp-1, Caspase 3 and other regulatory factors. But Rhizoma Panacis Japonici ethanol extracts aimed to inhibit the neuron was few reported. In recently, the important clinical therapy of cerebral infarction was early thrombolysis treatment.

Operations and the pre-treatment

Intragastric administration for one week, and according to the reported files, we make a two hour ischemia model and reperfusion for 24 hours. For the sham group, we instructed the same operation however we didn’t put the embolus in to the middle cerebral artery. According to the Longa score standard [4], we agreed that 0 score were without neurological signs; 1 score: animals cannot fully extend left fore; 2 score: the animals walk to the left circle; 3 score: animal fall in the line to the left side, 4 score: no spontaneous activity, conscious disorder. Neural function defect scale in 1 ~ 3 is divided into the model successfully, 0 score and 4 score, random added in the experiments, ensure that each group of animal number remains the same. Loss score in 1-3 is divided into the model successfully, 0 and 4, randomly added in the experiments, the guarantee animal number remains the same in each group.

The observation of blood flow of MCA [5]

This experiment detected using laser Doppler blood flow of right middle cerebral artery blood supply area changes. Rats prone position and fixed on the operating table, to the top of the head, cut along the line begins at the top of the skin until the skull, used as a starting point to the right anterior fontanelle 5 mm, 3 mm back. Damage the cranial with dental drill plate, the optical fiber probe with biological glue vertical fixed to the skull opening. To test 24 h after surgery on the right side of the brain artery ischemia in the surrounding area (ischemia half dark band) of cerebral blood flow, reduce blood flow was calculated. After the measurement, stitches head incision.

24 h after ischemia, killed and then TTC was conducted. The percentage of the total cerebral infarction group weight equalled to the degree of cerebral infarction. Groups of rats after 24 h was killed and the brain will be put in rats section moulding, starting from the frontal pole 2 mm in, sterile operation section once upon a time in the future for coronary serial section, each piece of 2 mm thickness. Put in brown bottle containing 2% TTC solution, 37°C avoid light incubation for 30 min, white as infarcts, rose red as normal brain tissue, 4% paraformaldehyde fixed fluid, neat order, according to the brain slices vertically, digital camera taking pictures. According to the color separation infarction group and normal tissues carefully after the surgery, weighing respectively. Cerebral infarction volume (%)=pale area weight/ weight (pale area+the pale section weight) × 100%.

24 h after each surgery, respectively, 10% chloral hydrate was injected into abdominal cavity to get a quick fast anaesthesia. The rat was killed and taken right lateral cortical tissue with injury. Protein lysis fluid was added, grinded cracked for 30 min at 4°C, then transferred to the EP, 13000 g centrifugal 5 min, supernatant was taken for total protein concentration detection with BCA. The protein concentration of Drp-1 and Caspase 3 (Figures 5 and 6).

Blood flow in the infarction area

24 h after infarction established, the blood flow was decreased to 30.26% ± 1.58% quickly, and the data were also increased to 52.1 ± 2.94%,57.3% ± 4.21% in the both RPJEL and RPJEH. Comparison was conducted in RPJE group and I/R group, we found that there was a significant difference between them. Samely, this difference was also existed in other three time including 2 h, 8 h, 24 h after infarction onset. However, no difference was found in both RPJEL group and RPJEH group, may be we should refined the concentration of the RPJE to get an optimized concentration (Figure 1). 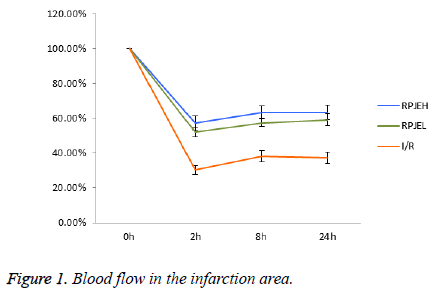 The effect of RPJE on the infarction volume

There was obvious infarction 24 h after the ischemia onset in the I/R group. Compared with the I/R group, the RPJE group including both low dose and high dose both had a great decrease in the infarct volume (p<0.05), however, no difference was existed in the both RPJE group, seen in Figure 2. 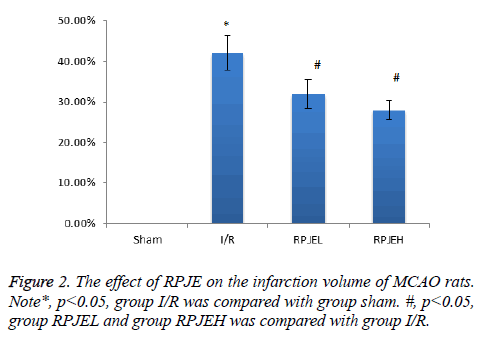 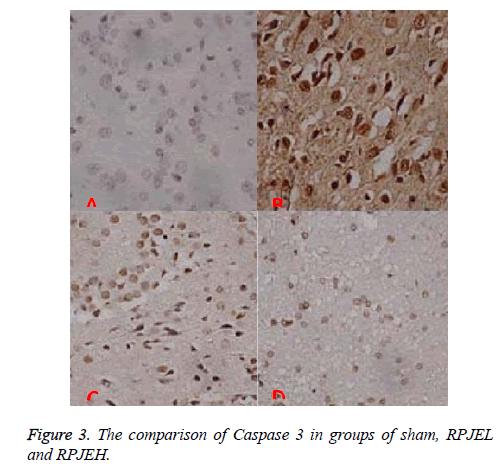 Figure 3. The comparison of Caspase 3 in groups of sham, RPJEL and RPJEH.

However, in the sham group, there was little expression, compared with sham group; the level of Drp-1 protein was higher in I/R group. In RPJEL and RPJEH group, was decreased significantly, and also the ratio was bigger in RPJEH group (Figure 4). 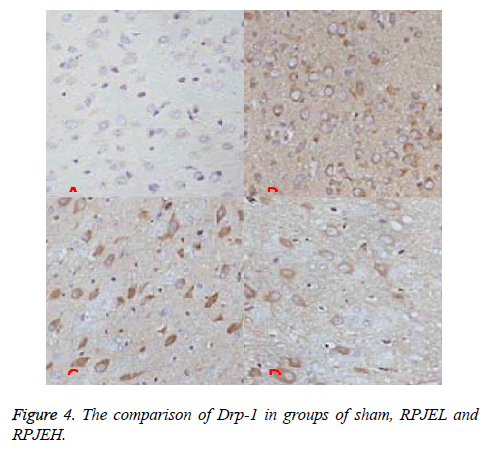 Figure 4. The comparison of Drp-1 in groups of sham, RPJEL and RPJEH.

The Drp-1 and Caspase 3 protein expression with western blot 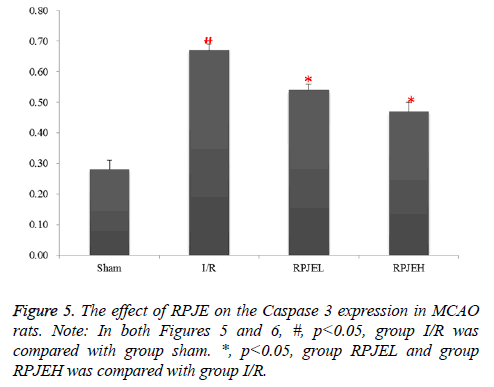 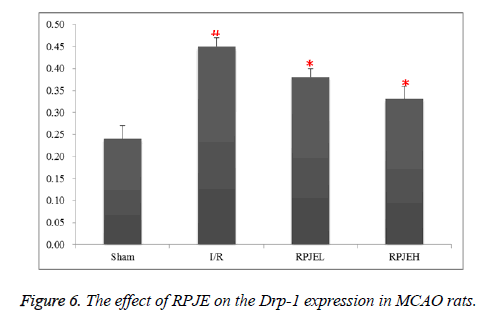 Figure 6. The effect of RPJE on the Drp-1 expression in MCAO rats.

In this research, we could found that RPJE group could effectively decrease the volume of infarction in MCAO rats, then may improve the neurological function, at the same time, it could also decrease the cell apoptosis, this was approved by before studies. The possible action mechanism mainly related to the inflammation reaction and oxidative stress injury after the ischemic reperfusion [10,11], decreased the Ca2+ overload [12].

Up to now, there was no report about the Drp-1 expression in the MCAO rats. Then we made a research design to utilize the Traditional Chinese Medicine the pre-treat the SD rats, than make a MCAO model on it, we found that the expression of Drp-1 in I/R group was higher than that in sham group. Thus this result could demonstrate that Drp-1 participate the process of ischemic reperfusion process in MCAO model.

At the same time the Drp-1 content in both RPJEL and RPJEH group was decreased gradually, the reduction of infarction volume, they all illustrated that RPJE may involve in the antiapotosis on Drp-1. Previous studies showed that in the ischemic-reperfusion model, other related gene of apotosis like bcl-2 could also inhibit the Caspase-3 activation to protect the stabilization of mitochondria cell membrane, and then could decrease the neuron apoptosis [14].

Currently there was no evidence about the inhibition of Drp-1 in protecting the neuron. However the studies have showed that the increased Drp-1 from the neuronal cytoplasm transit to the mitochondria, and activated caspase system, much important proteins and organelles in the mitochondria were damaged, eventually mitochondrial were broken [15]. And the result of this research was the same with above, also demonstrated that Drp-1 actually participated the process of blood flow improvement.