The effect of exposure to hypergravity on serum biochemical and hematological parameters in jet fighter pilots.

Modern jet fighter aircraft are capable of achieving G acceleration profiles that subject pilots to extremely high inertial forces in the head-to-foot direction (+Gz). Severe physical stress is imposed by the environment of rapid-onset, highly-sustained +Gz. Despite the importance of monitoring pathophysiological alterations related to +Gz exposure, there have been only a few studies concerning the physical status of human centrifuge trainees. To investigate alterations in serum biochemical and complete blood count parameters occurring in subjects exposed to high +Gz. Eighteen jet fighter pilots were exposed to +9Gz on a human centrifuge. Blood samples were obtained before and immediately after the centrifugation. Serum biochemical and hematological analyses were performed. The total protein level increased from a mean of 7.53±0.07 g/dL to 7.91±0.09 g/dL, a significant 5.0% (p<0.001) increase. The white blood cell, red blood cell and platelet counts also increased from a mean of 6.72±0.23 k/μL, 5.06±0.06 k/μL and 230.00±12.98 k/μL to 9.02±0.50 k/μL, 5.25±0.08 k/μL and 247.11±13.73 k/μL, respectively; significant elevations of 34.2% (p<0.001), 3.8% (p<0.001) and 7.3% (p=0.004), respectively. In addition, hemoglobin (2.0%, p=0.036) and hematocrit (4.3%, p<0.001) increased significantly after the centrifugation. We demonstrated that the serum levels of total protein and complete blood count parameters are significantly elevated during high +Gz exposure. Our data raise the possibility that intense muscular exertion during anti-G straining maneuver could be one of the causes of post-centrifuge hemoconcentration.

Modern jet fighter aircraft are capable of achieving G acceleration profiles that subject pilots to extremely high inertial forces in the head-to-foot direction (+Gz). With the advent of new, light-weight, high-thrust fighter aircraft, the physiology of the human operator, rather than the performance or structural limitations of the airframe, has become the determinant which defines the acceleration limits of the man-machine system. Severe physical stress is imposed by the environment of rapidonset, highly-sustained +Gz in which the aircraft operate [1]. Thus, it is of considerable importance to ascertain the occurrence of alterations related to +Gz exposure. Numerous investigations of human responses to +Gz have demonstrated many physiological alterations, including changes in cerebral blood flow, coronary blood flow, renal blood flow, endocrine reactions and cardiovascular reflexes [2-6].

Current efforts in aviation medicine to enhance tolerance to +Gz have included human centrifuge training [7]. The performance of anti-G straining maneuver (AGSM) on the human centrifuge has proved effective in enhancing +Gz tolerance [8,9]. The human centrifuge simulates +Gz akin to that encountered in aircraft; it helps pilots to learn the correct skills of practicing AGSM under more realistic high +Gz environments and maintaining their situational awareness and performance skills [7]. However, exposure to high +Gz provokes a wide range of distinctive pathophysiological stress, including interruption in arterial blood flow to the brain, elevation of heart rate and blood pressure through activation of the sympathetic nervous system, ventilation-perfusion mismatch with reduction in lung compliance and increase in the serum levels of epinephrine, norepinephrine and cortisol [10,11]. Furthermore, the various potential harmful effects, including loss of consciousness, cardiac dysrhythmia, atelectasis, mechanical visceral injury and musculoskeletal symptoms, have been documented during the centrifuge studies [6,11-13].

Despite the importance of monitoring pathophysiological alterations related to +Gz exposure, there have been few studies concerning the pre- and post-run physical status of centrifuge trainees and, particularly, investigating the influence of +Gz exposure on serum biochemical and hematological parameters. The aim of the present study was to investigate alterations in the serum biochemical and complete blood count (CBC) parameters occurring in subjects exposed to high +Gz on the human centrifuge.

Eighteen highly-trained, deeply-experienced jet fighter pilots (rank, first lieutenant or captain; median age, 29 years) were included in the present study. Before the centrifuge runs, all the subjects were examined by flight surgeons; they were healthy without cardiovascular problems, and none of them took medication. The study protocol was approved in advance by the Institutional Review Board at the Aerospace Medical Center, Republic of Korea Air Force. Each subject provided written informed consent before participating in the present study.

+Gz exposure on the human centrifuge

The centrifuge tests were carried out on the 6-m radius, computer-controlled human centrifuge located in the Aerospace Medical Training Center, Aerospace Medical Center, Republic of Korea Air Force. The gondola of the centrifuge was equipped with two-way audio and a one-way video communication system. The back of the gondola seat was reclined 13° from vertical. Baseline +Gz (+1.4Gz) was attained in 5 s and was the immediate start point for all subsequent +Gz excursions within a profile. All subjects were exposed to a single +Gz acceleration with rapid onset of 1 G/s and peak force of +9Gz sustained for 30 s.

A pre-run sample of 20 mL of blood was drawn into a collection tube 15 min before the centrifugation by venipuncture of the antecubital vein of the arm. Immediately after the centrifugation, an additional post-run sample was taken from the opposite arm. The serum biochemical and hematological analyses were carried out in the Department of Pathology, Aerospace Medical Center, Republic of Korea Air Force, using standard commercial reagent kits. Blood for biochemical analyses was allowed to clot at room temperature for 45 min, and then centrifuged at 2000 rpm for 10 min to separate the serum from the cells. A clinical chemistry autoanalyzer (Olympus AU 400; Olympus Corporation, Tokyo, Japan) was used to perform standard biochemical profiles on the serum samples, including amylase, lactate dehydrogenase (LDH), creatine phosphokinase (CPK), aspartate aminotransferase (AST), alanine aminotransferase (ALT), γ-glutamyltransferase (γ-GGT), uric acid, total protein, blood urea nitrogen (BUN), creatinine, total bilirubin, direct bilirubin, calcium and inorganic phosphate. An automated hematology analyzer (Sysmex SE 9000; Sysmex Corporation, Kobe, Japan) was used to measure CBC parameters, including white blood cell (WBC) count, red blood cell (RBC) count, hemoglobin (Hgb), hematocrit (Hct) and platelets. The subjects who developed symptoms after the centrifugation or showed abnormal laboratory findings were re-examined by flight surgeons and, if necessary, additional medical evaluations were performed.

The laboratory results are presented as the mean and the standard error. A paired t-test was performed to determine whether there was a significant difference in the mean value of each parameter between the pre- and post-runs. Statistical analyses were performed using SPSS ver. 15.0 (SPSS Inc., Chicago, IL, USA). Statistical significance was defined as a p value of less than 0.05.

Table 1 shows the pre- and post-run values of serum biochemical and CBC parameters. In all subjects, the pre-run values of all 14 biochemical and 5 CBC parameters were within normal range. Six of 19 parameters, including total protein, WBC count, RBC count, Hgb, Hct and platelet count, showed significant differences between the pre- and post-run values. The total protein level increased from a mean of 7.53±0.07 g/dL to 7.91±0.09 g/dL, a significant 5.0% (p<0.001) increase. The WBC, RBC and platelet counts also increased from a mean of 6.72±0.23 k/μL, 5.06±0.06 k/μL and 230.00±12.98 k/μL to 9.02±0.50 k/μL, 5.25±0.08 k/μL and 247.11±13.73 k/μL, respectively, significant 34.2% (p<0.001), 3.8% (p<0.001) and 7.3% (p=0.004) elevations. In addition, Hgb (2.0%, p=0.036) and Hct (4.3%, p<0.001) increased significantly after the centrifugation. However, despite significant elevations, the post-run values of these parameters did not exceed the upper limit of the normal range. The serum enzymes, including amylase, LDH, CPK, AST, ALT and γ-GTP, were not significantly increased during +Gz exposure. All subjects reported no post-run cardiac symptoms such as discomfort, heaviness or pain in the chest and breathing difficulties. Auscultation of the heart and lungs revealed no significant differences between pre- and post-run condition. No abnormality was visible on chest roentgenography, and no evidence of dysrhythmia was detected on electrocardiography. 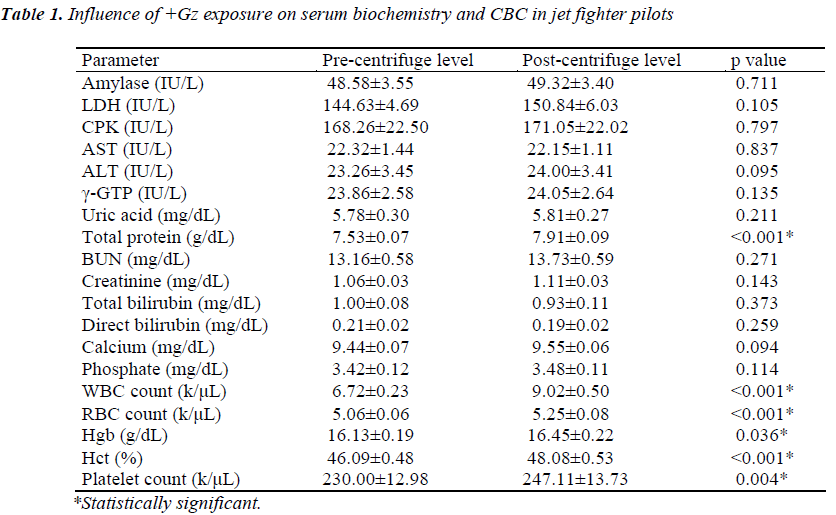 Every national military aviation organization has a system of monitoring the health status of pilots. These systems rely on periodical medical examinations in order to maintain good health in aircrew members. They endeavor to detect clinical disease and subclinical conditions as early as possible; they are used as tools in risk assessment and management. Routine blood testing is affordable, convenient and informative. Most physicians are familiar with the notion that routine serum biochemical and hematological testing may identify unsuspected subtherapeutic or toxic drug levels, subclinical biochemical conditions or hematological deterioration. The Republic of Korea Air Force pilots are examined medically by flight surgeons on a yearly basis, and they have undergone periodical routine blood testing.

The general effects of +Gz stress have been the subject of many investigations reported in the literature; however, little information is available on the alterations in blood constituents occurring in aircrews exposed to high +Gz. In the present study, the levels of serum biochemical and hematological parameters were analyzed in jet fighter pilots exposed to high +Gz on the centrifuge. We demonstrated significant increases in total protein level and CBC parameters after +Gz exposure. This finding is consistent with previous data showing +Gz-induced hemoconcentration [3,14-16]. Greenleaf et al. observed a significant increase in Hct, along with a decrease in plasma volume, after centrifugation [16]. Similarly, Van Beaumont et al. revealed that +Gz-induced elevation in total protein level, albumin level and Hct accompanied plasma volume loss [14]. Taken together, we assume that intense muscular exertion during AGSM could be one of the causes of hemoconcentration. Heavy muscular straining was required in the present study for successful performance of the tracking task and maintenance of consciousness by the subjects at high +Gz; they were encouraged to perform AGSM, which requires isometric contraction of the muscles in the abdomen and lower extremities. Hemoconcentration caused by physical exercise can be attributed to three things. Firstly, with the onset of exercise there is an almost immediate loss of plasma from the blood to the interstitial fluid space. Increased blood pressure causes an increase in vascular permeability and hydrostatic pressure in the capillaries, thus forcing plasma from vasculature to interstitial compartments. Secondly, as metabolic waste products rise in the active muscles, intramuscular osmotic pressure increases which draws fluid out of the capillaries to the muscles. Thirdly, sympatheticmediated splenic contraction induces hemoconcentration [17,18]. Splenic contraction is observed in conditions of increased sympathetic activity, such as exercise and physical restraint [19,20]. In addition, the blood cell content of the spleen alters depending on the pressure in the splenic veins or the intra-abdominal pressure. Intense muscular straining and increase in intraabdominal pressure, both of which are essential to the performance of AGSM, might involve, partly at least, elevation of CBC parameters.

The results of the present study need to be considered in the light of their limitations. Firstly, the subjects were screened to be otherwise young and healthy. Therefore, they may not be representative of all aircrews. The generalizability of our data to medically compromised subjects remains unknown. Secondly, no untreated control group of pilots was available for comparison purposes to better understand the current alterations of values. Thirdly, in our institution, the human centrifuge training program includes an elementary course (+6Gz) for flight-naive, beginning pilots and a supplementary course (+7.3Gz and +9Gz) for experienced pilots. Further investigations regarding large numbers of subjects exposed to a variable range of +Gz are necessary to confirm our results. Fourth, the indicators of hemoconcentration were found to be statistically significantly elevated from baseline, but were not outside the range of normal. We did not follow up the subjects to find out how long the rise persists and to investigate whether the parameters are further elevated after a certain period of time. We are currently exploring the time course of hemoconcentration effect after high +Gz exposure.

In conclusion, we demonstrated that the serum levels of total protein and CBC parameters are significantly altered during high +Gz exposure. Our data raise the possibility that heavy muscular exertion during AGSM could be one of the causes of hemoconcentration.