Objective: To explore the effect of bone marrow mononuclear cells transplantation on the expression of Brain Derived Neurotrophic Factor (BDNF) and neuronal apoptosis in rats with traumatic brain injury.

Conclusion: The bone marrow mononuclear cells transplantation promotes the nerve function recovery in rats with traumatic brain injury by facilitating the expression of BDNF mRNA and inhibiting the apoptosis of cortical neurons.

Bone marrow transplantation, or hematopoietic stem cell transplantation, has been widely used in the treatment of hematologic malignancies and some suicide immunodeficiency diseases [1,2]. Bone marrow stem cells, including ectomesenchymal stem cells and hematopoietic stem cells, can increase the secretion of nerve growth factor and repair the damage of nerve tissue [3]. Bone Marrow Mononuclear Cells (BMMC) transplantation has recently become a hot topic in the study of brain damage and it enables to improve the function of nerve tissue by reducing tissue apoptosis and forming neurons with the special function [4,5]. The brain injury model was induced by free-falling method in this study. Mononuclear cells are injected from internal carotid artery to study its neural function damage and BDNF expression.

In this study, the brain injury model was induced by freefalling method with a falling weight of 40 g and a drop height of 30. Inject anesthesia into the rats with 10% chloral hydrate (0.3 g/k) before the start of the experiment and fix them on operation stage with the exposure of cortical motor area. Hit the cortical areas of rats in TBI group and BMMC group by means of free-falling method. Set the CON group as the false surgical group only treated with craniotomy. Close cranial and suture skin after the surgery with normal feeding. References for model preparation [6].

Inject excessive anesthesia into rats to death, collect the femur and tibia (with the preservation of stem epiphyseal section). Soak them with 75% alcohol and after washing five minutes with PBA buffer solution. Cut off bone marrow cavity with the washing of saline and repeatedly blow it in EP tube to the suspension solution. Separate the mononuclear cells by means of Ficoll density gradient centrifugation. Wash the cell suspension of Ficoll with culture solution and from within take 1 ml (5 × 106 cells/ml) to inject into the internal carotid artery of BMMC group rats. Inject equal amount of nutrient solution into rats of the TBI group and the CON group.

The neurological function severity scores (mNSS) were record 1, 4, 8, 16 d after cerebral trauma from the perspective of movement, sensory, reflection and balance. The score of “0” means a normal state and “2” means nerve damage. The higher the score, the severer the damage and the highest score reaches “20”.

4 d after nuclear cell transplantation take surrounding brain tissue within the hematoma range of 5 mm in rats and preserve it at the temperature of 4°C under the fixation of PBS. Build up brain tissue single cell suspension after crushing centrifugal suspension; Take 1 × 105 cell suspension for centrifugation and then conduct double staining through apoptosis detection kit with flow cytometry test.

Take 6 rats for anesthesia and open the chests with the exposure of the heart, quickly pour PBS solution into the left ventricular, and then fix it by pouring into 4% paraformaldehyde solution and strip mouse brains; With a fixation for over 48 h, the specie is sliced in coronal plane with the thickness of 5 μm after the gradient alcohol dehydration, xylene transparent and paraffin embedding. Stain the slice by means of SP method after the treatment of dewaxing, hydration and microwave heat repairing. Add BDNF antibody and keep the temperature of 4°C for the night; In turn, drop wise add second antibody (Goat Anti-rabbit IgG) and SABC working solution at the room temperature for 20 min; DAB visualization; Finally perform dehydration, transparency as well as slice and measure the number of positive cell with Nikon D3 microscope, NIS - Elements image acquisition and analysis software.

Make the data analysis through SPSS17.0 and compare three groups by one-way analysis of variance, and if the difference is significant, then use the Bonferroni test for pairwise comparison. All the data are marked by mean ± standard deviation (?x ± s with the inspection standard of p<0.05. 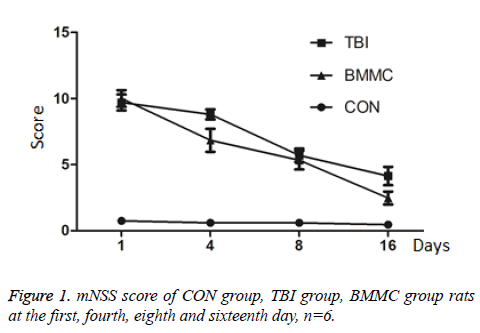 As shown in Figure 2, 4 d after BMMC transplantation, neurons apoptosis rate in TBI group is significantly greater than that in CON group (P=0.007) and BMMC group (P=0.041). 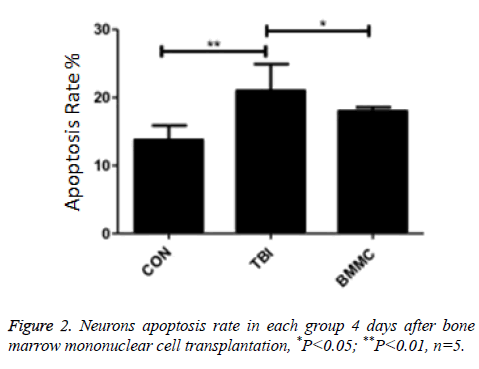 As shown in Figure 3, expression quantity of BDNF mRNA in TBI group is obviously lower than that in CON group and BMMC group, P=0.009; P=0.004. 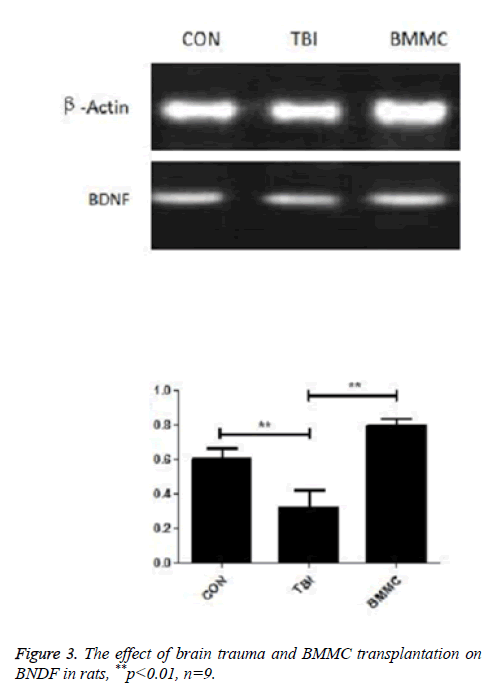 The result shows (SP staining) BDNF immune products are mainly distributed in the cortex with cytoplasm staining, the positive cell number is: control group (47.09 ± 3.6), TBI group (25.2 ± 1.8), and difference between the two groups has statistical significance, P=0.007. The positive cell number of BMMC group (50.12 ± 2.2) remains statistically significant compared with that of TBI group, P=0.003, as shown in Figure 4.

Figure 4: Expression of rats’ brain tissue with BDNF damage in each group, n=6.

In recent years, there have been more and more researches about BMMC transplantation for the treatment of cerebral hemorrhage, cerebral trauma and other diseases of the nervous system [7,8]. BMMC is combination of cells, including a variety of stem cells and progenitor cells, such as ectomesenchymal cells and hematopoietic stem cells. In the treatment of transplantation, it has many advantages like convenience, cheapness, low rejection and autologous transplantation [9,10]. Studies have shown that BMMC function mechanism may be: serve as a direct replacement for cytosis by forming the neuron cells of special function; adjust immune response; change microenvironment by secreting materials like neurotrophic factors [11-14]. In general, the specific mechanism of its protective effect is not entirely clear and further clinical trials are needed for confirmation.

We find that the mNSS score of rats with brain trauma decreases is obviously lower than that in group CON at the first, fourth, eighth and sixteenth day, BMMC transplantation can increase mNSS score, suggesting BMMC transplantation enables to restore neuronal function of the rats. BDN, a kind of brain protection factor, has neurotrophic effect. This study found that after operation, the BDNF mRNA level of rats in TBI group declines compared with that in CON group, explaining BDNF is involved in the pathogenesis of brain injury caused by nerve damage, and BMMC transplantation can significantly improve the level of BDNF mRNA, illustrating BMMC promote the synthesis of the cortical cells. All these are consistent with the results of previous researches [15]. Perform BDNF positioning and half quantitative analysis further by use of immunohistochemistry and the result further confirms the fact that BMMC transplantation can improve the level of BDNF. These experiment results provide the basis for conducting subsequent and deeper molecular biology research. In addition, this study also discovers that BMMC transplantation can effectively avoid cortical neurons apoptosis with the damage. Similar to the results of this study, Yang et al. [16], treats rats hemorrhage with BMMC and finds that BMMC can obviously promote the recovery of the rats’ neuronal function and reduce apoptosis of neurons in the brain tissue. The BMMC transplantation treatment mechanism for brain injury is multifarious [14] and further researches are still needed to explore what specific mechanism works.

Above all, this study finds that bone marrow mononuclear cell transplantation is able to promote neural functional recovery of TBI rats by promoting the expression of BDNF mRNA and inhibits the cortex neuron apoptosis. Mononuclear cell, due to its convenient and quick access to experiment materials, will certainly be developed in the treatment of traumatic brain injuries and clinical trials of high quality are required for future researches.