Interferon/retinoic acid combined with induction of apoptosis related genes (genes associated with retinoid-IFN-induced mortality and GRIMs) is a new apoptosis-related gene family, which is a group of novel cell death regulators with IFN-β combined RA induced expression. In this study, the effects of 9- cis-retinoic acid (RA) on expression of gene associated with retinoid-interferon mortality-1 (GRIM-1) in KM mouse bone cancer tissue were investigated. The transplantable models of bone cancer in KM mice were established to study inhibitory effects of 9-cis-RA against tumor. Immunohistochemical technique was used to analyze the expression of GRIM-1 in KM mouse cancer tissue. The results showed that 9- cis-RA was able to inhibit the growth of bone cancer on mouse at a dose of 650 mg/kg. The expression of GRIM-1 was declined in the mice treated with 9-cis-RA. 9-cis-RA has a significant antitumor effect in vitro. The mechanisms of 9-cis-RA on tumor might associate with down regulating expression of GRIM-1. There was no significant change in the transcriptional level of GRIM-1 in control bone tissue after 9-cis-RA treatment for 24 h. The transcription level of GRIM-1 in bone cancer tissues significantly increased.

Retinoic acid (RA) is a natural or synthetic derivative from vitamin A, the metabolites of vitamin A having very important physiological activities exist in human body include all-trans-retinoic acid (ATRA), 9-cis-retinoic acid (9-cis-RA) etc. [1-4]. The chemical structure of 9-cis-RA is shown in Figure 1. 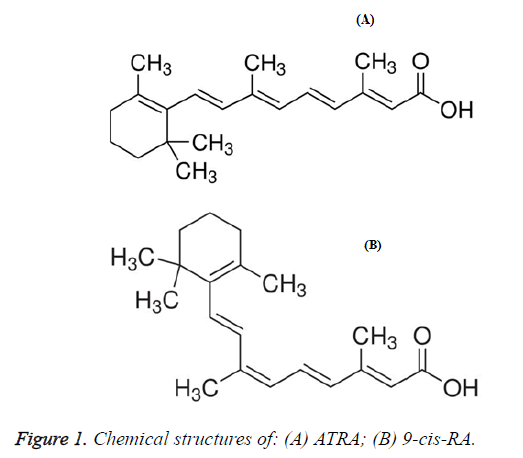 Lack of RA usually results in bronchial squamous epithelium growth and dys-differentiation, cellular fission and nucleic acid synthesis associated with increased mucosal metaplasia, and generates changes in pathological morphology which are similar to precancerous lesion [2-4]. Administration of RA can reverse the abnormal differentiation of epithelium and suppress the formation of chemicals-induced bronchial tumor. 9-cis-RA is able to induce differentiation of tumor cells and consequently promote apoptosis of tumor cells [1,3,4].

Bone cancer is a very common malignant tumor all over the world, nowadays it has become the primary cause of cancer death in most countries. Therefore bone cancer is currently considered to be the most serious malignant tumor to threaten health and life of human. When patients were diagnosed as suffering from bone cancer, approximately 70% of the cases belong to middle or terminal cancer. Early detection of bone cancer will significantly increase the 5-y survival rate of patients [5-15]. Multiple genetic abnormalities can be detected during the stages of early bone cancer or precancerous lesions, and these abnormalities usually precede clinical symptoms to become a molecular marker for early bone cancer to a certain extent. Interferon/retinoic acid combined with induction of apoptosis related genes (genes associated with retinoid-IFN-induced mortality and GRIMs) is a new apoptosis-related gene family, which is a group of novel cell death regulators with IFN-β combined RA induced expression. GRIM was found in 1994 with separation using antisense gene knockout method [16]. Retinoic acid/interferon induced apoptosis related gene 1 (GRIM-1) is a newly discovered cell apoptosis regulating gene, it is a new protein encoding a molecular weight of 64 kD, participate in interferon and retinoic acid induced apoptosis of tumor cell regulation [14]. The allelic gene SHQ-1 of GRIM-1 is an important part of the snoRNA, SHQ-1 was first discovered in the analogues of human as assembly factor shq1p of yeast H/ACA RNP, and it has very important functions in the biosynthesis of the H/ACA nucleoli and telomerase RNPs.

While there has been little to no report published on the expression level of the GRIM-1 protein in bone cancer tissues [17-21].

In this paper, polyphenolic compounds were used as quality control index and to observe the effect of 9-cis-RA on growth of Bone cancer in KM mice. Reverse transcription polymerase chain reaction (RT-PCR) was used to detect mRNA levels in tissues of bone cancer to explore the possible mechanisms of the anti-tumor effects of RA. This study provides a theoretical fundamental for the clinical application of RA in the treatment of bone cancer.

Bone cancer was stripped from tumor-bearing KM mice under sterile condition, well-growth tumor blocks were selected, and cut into small pieces by scissors, the cancer tissue blocks with similar size (approximately 2 × 124 Bone cancer cells) were used and transplanted to right axillary subcutaneous of mice by trocar, the mice were randomly divided into 6 groups, after inoculation for 24 h administration started every day and continued for 7 d. According to various 9-cis-RA dosage three 9-cis-RA groups (450 mg/kg, 650 mg/kg and 850 mg/kg per day) were set as well as a saline group as negative control group and cyclophosphamide positive control group (50 mg/kg per day by oral administration). The mice were divided into two groups to conduct experiments, after 24 h of final administration, the mice were executed by cervical dislocation method, weighed, dissected to strip the cancer block, and weighed the tumor. Tumor inhibition rate was calculated according to Eq 1.

Homogeneity of variance test was first conducted with statistics processing method followed by t-test, P<0.05 indicates that the results are statistically significant.

Samples were taken from Lewis cancer tissues of the second batch of mice after 7 d of 9-cis-RA administration. The samples of negative control group and positive control group were also taken. The procedures of immunohistochemistry were described as follows: the specimens were fixed with 10% neutral formalin, cut sections with paraffin embedded method. All the paraffin wax blocks were cut sections continuously, the thickness was about 4 μm. After conventional de-waxing, alcohol dehydration, and antigen repair with microwave oven, the samples were detected by SP immunohistochemical assay. The concentration of GRIM-1 was set as standard. A blank control with known GRIM-1 positive staining of bone cancer tissue sections was used as positive control.

Effect of 9-cis-RA on the expression of GRIM-1 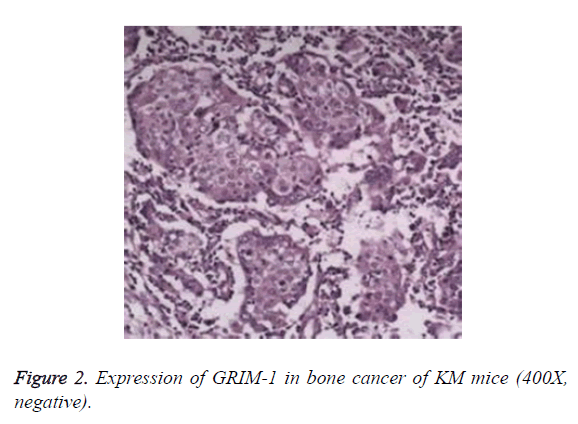 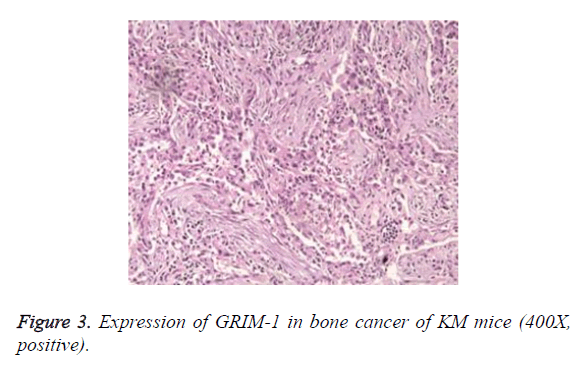 During the past two decades, RA compounds have received increasing attention for the prevention and treatment of solid tumor metastasis. Both clinical experiments and clinical practice indicate that RA has the function of inhibiting tumor metastasis and proliferation. ATRA induced differentiation has good effect in the treatment of acute promyelocytic leukemia. In recent years, it was found that RA also have an effect on growth of breast cancer and prostate cancer cells, RA is currently used in phase II clinical experiments for treatment of bone cancer. 9-cis-RA is a metabolite of ATRA in vivo, the metabolism is more effective in the process of induced cell differentiation with less adverse reactions like ATRA.

9-cis-RA can promote heterodimeric reaction of receptor, thus it has more effective functions on inhibiting tumor cell growth, promoting tumor cell differentiation and apoptosis. The ability of 9-cis-RA to induce apoptosis of tumor cells and decrease apoptosis gene protein expression are significantly stronger than ATRA. Apoptosis is extremely important for maintenance of tissue homeostasis. In recent years, with an in-depth investigation of apoptosis, scientists have found that apoptosis is closely related to tumor. Therefore, it becomes one of the new strategies for clinical treatment and prevention of cancer.

Previous study has found that GRIM-1 mainly regulated cell differentiation and/or apoptosis, the gene loss or expression abnormalities of GRIM-1 might have a certain relationship with carcinogenesisis, it is a potential gene for tumor suppressor [5-17]. Decrease or deficiency in the level of GRIM-1 gene transcription can enable epithelial cells to escape from the control of natural RA. In previous studies, 9-cis-RA was used for human bone adenocarcinoma strains of Calu-3 and H1975, human squamous cell carcinoma strains of H520 and CHLH-1, respectively [6,8-12,15]. The results indicated that 9-cis-RA can obviously inhibit bone cancer cell growth and promote cell apoptosis. RT-PCR detection showed that GRIM-1 transcription levels significantly increased, suggesting that GRIM-1 may involve in and mediate the process of tumor growth inhibition by 9-cis-RA. Because of the difference between many biological properties of cell strains and in vivo tumor cells, the primary cultured bone cancer cells were used for the current research to get closer to the environment in vivo. The bone cancer tissue and control bone tissue after treated with 9-cis-RA were observed and compared for GRIM-1 transcriptional level changes to explore the relationship between abnormalities of RA receptor expression and carcinogenesisis of bone cancer.

Singh et al. have found that the expression of GRIM-1 decreased in around 75% of cell lines, no expression of GRIM-1 was found for the undifferentiated bronchial epithelial cells cultured in vitro and the majority of pulmonary adenocarcinoma cells, but GRIM-1 was expressed in all normal bone tissues [19,20]. The results in this study showed that before 9-cis-RA treatment, the expression level of GRIM-1 in bone cancer tissue decreased compared with normal control group. Therefore it can be inferred that GRIM-1 may be significant to trigger differentiation and restriction of cell division (normal tissue), and a decrease of its expression might directly result in pathogenesis of bone cancer.

In the study of bone cancer cell line A549, it was found that after the bone cancer cells transfected by GRIM-1 with RA, both the growth rate of cells in vitro and rate of oncogenicity in vivo decreased [6,16-18]. The current results showed that there was no significant change in the transcriptional level of GRIM-1 in control bone tissue after 9-cis-RA treatment for 24 h.

This work is funded by research project (No. 20134391) of Shanghai Municipal Health and Family Planning Commission.