Methods: We took the clinical cases as research subjects. The patients with type I and type II diabetes mellitus who had retinopathy and no retinopathy were 120 cases and 100 cases. At the same time, we analyzed gene polymorphism of tumor necrosis factor for all the patients (rs1800629).

Results: A allelic gene of rs1800629 related to type I diabetes mellitus. We did not find significant correlation between rs1800629 and diabetic retinopathy by adjusting age, gender, duration of diabetes mellitus, HbALc, high blood pressure, kidney disease and other variables.

Conclusion: This study has preliminarily confirmed that functional single nucleotide polymorphism A in promoter region related to type I diabetes mellitus, which had no significant correlation with diabetic retinopathy.

Diabetes mellitus (DM) is one of the most common diseases in clinic, which has high morbidity rate and mortality rate. Its main related complication is microangiopathy, including diabetic retinopathy (DR) and diabetic nephropathy (DN), which will cause a serious impact on the life quality of the patients [1]. Diabetic retinopathyis mainly due to that high blood glucose level promotes retinal capillary proliferation, which will lead to ablepsia if it is serious. Diabetic retinopathy is the local expression of systemic disease. The epidemiologic study showed that 80% patients with diabetes mellitus for more than 20 years would suffer from severe diabetic retinopathy [2,3]. In the new cases of blindness in the United States, more than 12% of them was induced by diabetes mellitus, and at the same time, it was also the main cause of blindness population aged 20-64 years of age. So its related research and treatment is always a hot spot in medical research [4-8]. The pathological changes of retinal capillary are mainly caused by a series of cascade reactions, which includes the formation of advanced glycation end products (AGEs) and persistent high blood sugar [9-11]. The interaction between AGEs and its receptors on the surface of macrophages and endothelial cells promotes the compound and secretion of multiple pro-inflammatory cytokines, including tumor necrosis factor (TNF-α). It was reported that TNF-α was mainly involved in the destruction of the blood retinal barrier and the formation of new blood vessels, so it was one of the main effective factors of diabetic retinopathy [12]. Many studies had reported that the polymorphism of tumor necrosis factor promoter related to some related diseases, and rs1800629 (TNF-308) was the most widely used single nucleotide polymorphism sites. Compared with the increased level of TNF in G allele cycle, TNF-308 A homozygous individuals with allele reduction, which was also bad for the prognosis of infectious diseases [13-16]. TNF gene was located near the 6 chromosome, which was human leucocyte antigen (HLA). In this study, we chose the clinical patients with type I and type II diabetes mellitus, and preliminarily explored the polymorphism of the gene promoter (rs1800629) in the TNF regulatory region, compared and analyzed the correlation between its related effect and diabetic retinopathy, which could provide references and guidance for clinical treatment and basic research.

This work was approved by the Ethic Committee of the Second Affililatied Hospital of Anhui Medical University.

Firstly, selected the patients according to inclusion and exclusion criteria before the study, the inclusion criteria included: the age was over 18 years old; the patients who was receiving the treatment for diabetes mellitus (took antidiabetic agents or insulin orally); the patients with type II diabetes mellitus had been receiving hypoglycemic therapy for more than 5 years; the patients with combined heart, liver, lung, nervous system, hematological system and other serious illnesses or complications were excluded. The basic information of the patients was collected by the form of questionnaires. Evaluated the condition of the included retina according to the revised Early Treatment of Diabetic Retinopathy Standard (ETDRS). And sight-threatening diabetic retinopathy (STDR) was defined as at least one eye with non proliferative diabetic retinopathy, proliferative diabetic retinopathy and diabetic macular edema. While the control group defined it as the retinal grading never exceeds the minimum NPDR, no history of macular edema. The evaluation of eye ground was finished by a professional ophthalmologist alone, who knew nothing about the diabetes type information for patients.

Extracted DNA from whole blood, the specific operation was processed with QIAamp blood DNA kit (Qiagen company) according to product instructions. We used Sequenom mass spectrometer to type the gene of rs1800629. SNP site was determined according to Hardy-Weinberg law of equilibrium. All the data and analysis were processed by SPSS 20.0 software (IBM SPSS Statistics 20.0, SPSS Inc., Armonk, NY). The continuous non parametric variables in the basic information of case group and control group were analyzed by Mann-Whitney U test. We chose χ2 test to analyze dichotomic variable. The correlation between SNP and DR was analyzed by Chi square test, while the multivariable analysis was analyzed by binary logistic regression. If p<0.05, then the differences had statistical significance. 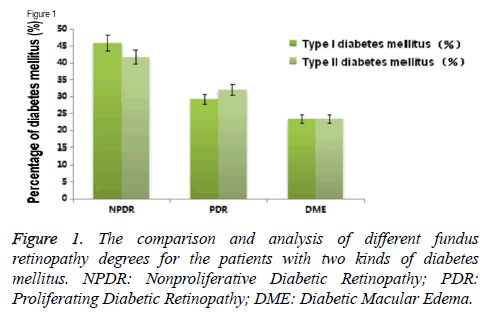 Rs1800629 was significantly related to the type of diabetes mellitus

Table 1. The comparison and analysis of the correlation among rs1800629 (-308G>A), NPDR, PDR and DME for the patients with two kinds of diabetes mellitus.

Early detection of diabetic retinopathy has great significance for the children and adolescents with type I diabetes. At present, most researches were focused on the mechanism of cytokines in proliferative retinopathy, which indicated that high blood glucose level promoted the increasing expression of proinflammatory cytokine and it participated in the progression of retinopathy [17,18]. And TNF-α played a role of local cellular molecular signal aggregation in chronic inflammation of diabetic fundus.

In our study, We have found that rs1800629 was related to type I diabetes mellitus. However, there was no significant correlation between rs1800629 and diabetic retinopathy by adjusting age, gender, duration of diabetes mellitus, HbALc, high blood pressure, kidney disease and other variables. The previous study on the correlation between rs1800629 promoter SNP and DR reported that there was no obvious correlation between the polymorphism of this gene and the risk of STDR in white race patient population [19], which was the same with the result of this study. While the latest study showed that rs1800629 allel A related to the increased morbidity rate of PDR in Brazil population [16]. So it was not excluded the possibility of racial differences in the relationship. Functional studies indicated that TNF could be regarded as the biological marker of diabetic retinopathy. Compared with diabetic patients without retinopathy, type I diabetes mellitus combined with retinal pathology to increase TNF level in peripheral circulating serum [20,21]. At the same time, mRNA of tumor necrosis factor in vitreous body of patients and its expression of soluble receptors increased significantly. The animal research indicated that used angiogenin-1 could control the expression of tumor necrosis factor effectively, which was helpful to improve the prognosis of early diabetic retinopathy in rats [22-24].

More and more evidences showed the complex interreaction between the TNF in HLA III level area and other genes, the related studies might help to explain the genetic and functional differences [25]. Linkage disequilibrium of alleles in the major histocompatibility complex (MHC) region made low possibility of the correlation between SNPs and TNF phenotype in this region. The study assumed that possible alternative approaches of the TNF expression might exist, including the interaction among promoter methylation of TNF promoter in 3 'non translation region, -308 element and epigenetic control [26,27]. The further study on this kind of gene and expression regulation factor would be helpful to recognize the action mechanism of pro-inflammatory cytokine in diabetic retinopathy.

The recent research showed that the linkage disequilibrium occurred in tumor necrosis factor rs1800629 allele and MHC haplotype HLA-A1-B8-DR3, which could explain functional correlation among allele A, high TNF expression and insulindependent diabetes. upto now, there was no specific factor that could indicated tumor necrosis factor SNPs could increase the susceptibility of type I diabetes mellitus [28,29].

In conclusion, rs1800629 (TNF-308A) allelic gene was related to type I diabetes mellitus, we found no correlation between gene polymorphism in promoter region and two kinds of diabetes mellitus. At present, the study showed that the systemic or local increased TNF factor level expression related to diabetic retinopathy. But further studies are needed to explore the complex interactions among TNF gene, HLA haplotype and epigenetic modification to clarify the specific impact of it on diabetic microangiopathy. Our findings provide suggestive evidence that polymorphisms in the TNF gene may be potentially involved in the pathogenesis of diabetic retinopathy and should be investigated further.