Alzheimer’s disease (AD) is a chronic neurodegenerative disease characterized by a progressive cognitive impairment and memory impairment. The main pathological features are deposition of Senile Plaques (SP), Neurofibrillary Tangles (NFTs), and apoptosis of a large number of neurons [1]. The incidence of AD has been increasing, and it is estimated that there would be 100 million patients of AD worldwide in 2050, which would bring a heavy burden on the patient’s families and society [2]. Therefore, the development of safe and effective drugs that prevent and treat AD is of great practical and social significance. Due to the complex causes of AD, the scientists put forward a variety of hypotheses according to the pathology and characteristics of AD, such as the Aβ toxicity theory, tau protein theory, oxidative stress theory, and so on [3]. The accumulated evidence has shown that the aqueous extract of Curcuma wenyujin has antioxidant stress effects, allows antidepressant blood circulation, etc., [4]. Our previous study had shown that that an aqueous extract of Curcuma wenyujin can improve the cognitive function in Aβ25-35 Intracerebroventricularly (ICV)-injected mice [5]. This study further investigated its mechanism on this basis.

Preparation of the aqueous extract of Curcuma wenyujin

Preparation of the aqueous extract of Curcuma wenyujin: 1 kg of Curcuma wenyujin was soaked in 6000 mL water for 1 h, extracted at 100°C for 2 h, drug residues were extracted 2 times and every time with 1 h by water decocting method. The filters were combined and were dried at 70°C under reducing pressure, and pulverized into fine powder (119.77 g), which was the aqueous extract.

Equal male and female Kunming mice (SPF), that weighed 20-22 g (n=48, 8 weeks in age), obtained from Liaoning Changsheng Biotechnology Co., Ltd. The mice were maintained under standard housing conditions (22°C ± 2°C and constant humidity 50% ± 5%), and light was given 12 h/d. Food and water were available ad libitum. The use of the experimental animals was strictly in compliance with the Chinese legislation and guidelines determined by the Experimental Animal Research Institute of Liaoning University of Traditional Chinese Medicine (131/2010; Approved on November 1, 2011).

Aβ25-35 aging: Aβ25-35 was dissolved in sterile saline, and incubated at 37°C for 120 h. The mice were divided into six groups, each group had eight mice. The mice were weighed, and anesthetized by intraperitoneal injection of 3.5% chloral hydrate at 10 mL/kg. After that, the mice were fixed on a brain stereotaxic device using a mouse adaptor, the skulls were then exposedand a 2 cm incision was made on the midline of the skull. The bregma in the fontanel was used as the starting point to backward for 0.5 mm, and then a micro-injector was vertically penetrated to the depth of 3.00 mm, at a distance of 1.0 mm. Then, a 3 μL aggregated Aβ25-35 was slowly administered ICV, within 1 min, control group was injected with volumes of sterile saline. The needle was retained for 5 min so that the drugs can disperse. The mice were orally administered with the aqueous extract of Curcuma wenyujin (0.16-0.48 g/kg), donepezil (1.3 mg/kg) or vehicle by gavage following the second day after Aβ25-35 injection. The mice were dosed on a daily basis.

The mice were deeply anesthetized with chloral hydrate (300 mg/kg i.p.), and then fixed by 4% paraformaldehyde. Their brains were removed, and embedded in paraffin. Then, the brain was sliced with a slicer to 5 μm size slices. The sections were treated with diluted first antibody overnight 4°C. After washing, the secondary antibody was administrated at room temperature for 1 h, and then 3, 3’-Diaminobenzidine (DAB) coloring was performed. The staining process was carried out in accordance with a modified ABC immunohistochemistry procedure. The antibodies used for immunohistochemistry analysis included the tau (ser404) and tau (thr231) antibody. Images were acquired with an Olympus inverted microscope.

One hour after the last administration, three mice from each group were extracted to be decapitated quickly; following this, the hippocampus was separated on ice, and weighed. The brain tissue was rinsed with cold PBS twice, and then disrupted with 400 μl of cold hypotonic buffer for 15 min on ice. The total protein was extracted from the hippocampus after being lysed by protein lysis buffer. The Bradford assay was used to determine protein concentration. Protein extracts measuring (50 μg) were separated with sodium dodecyl sulphatepolyacrylamide gel electrophoresis and were then electrophoretically transferred to polyvinylidene difluoride membranes. After incubation at room temperature with 5% non-fat milk in phosphate buffered saline (PBS) for 2 h, the membranes were incubated overnight at 4°C with the indicated primary antibodies against tau-5 (Invitrogen), ser 404, thr 231, thr 181, PI3K, p-PI3K, AKT, p-AKT, GSK-3β, p-GSK-3β, and β-actin. The membranes were then incubated with secondary anti-mouse IgG or anti-rabbit IgG antibodies for 2 hat room temperature. After washing again, the hypersensitive ECL chemiluminescence kit was added, and the expression of the relevant protein was observed by a gel imaging system. Analysis was performed by Quantity One 4.6.2 image analysis software.

Results of the immunohistochemical test

Immunohistochemistry analysis showed that the number of ptau (ser404) and p-tau (thr231) increased dramatically in the hippocampi of the Aβ25-35-injected mice compared to the control group. However, compared to the model group, the increase of p-tau (ser404) and p-tau (thr231) by Aβ were blocked by aqueous extract of Curcuma wenyujin 0.48 g/kg and the donepezil 1.30 mg/kg treatment’s (Figure 1). 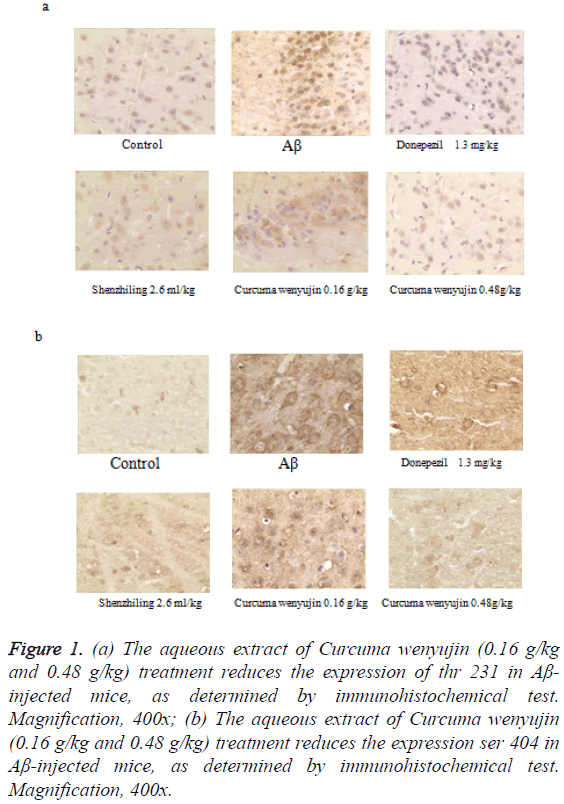 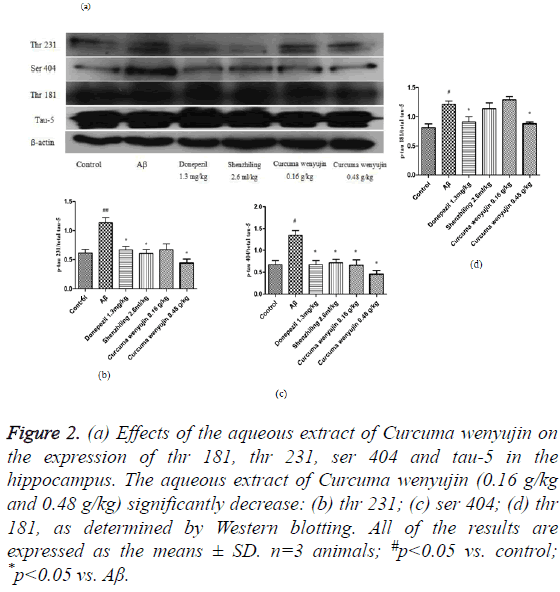 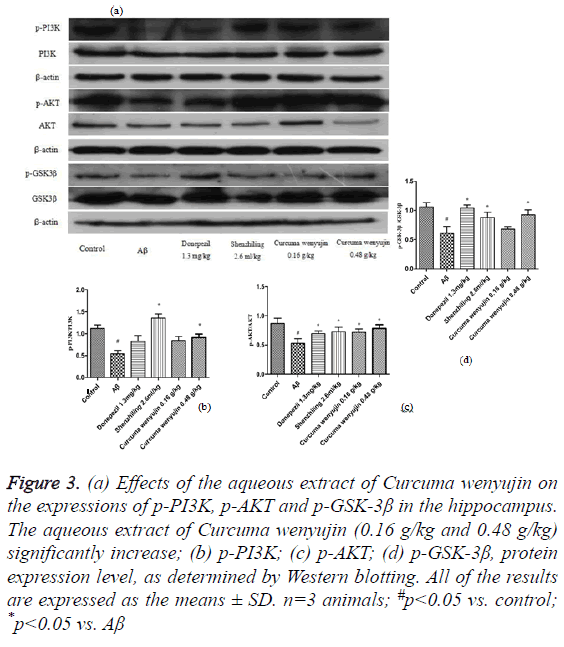 In this study, we confirmed that the aqueous extract of Curcuma wenyujin inhibited the phosphorylation levels of tau (thr231), tau (ser404) and tau (thr181), and the phosphorylation of PI3K, AKT, and GSK-3β were increased in mice induced by Aβ25-35. Our previous study had shown that aqueous extract of Curcuma wenyujin can improve the cognitive function in Aβ25-35 ICV-injected mice [5]. Together, these results suggest that aqueous extract of Curcuma wenyujin improves the learning and memory impairments possibly through the PI3K/Akt/GSK-3β signaling pathway. Donepezil, a cholinesterase inhibitor, is a representative symptomatic therapy for Alzheimer’s disease. Also, it has been reported that donepezil could reduce phosphorylated tau levels by Western blot analysis, as well as an immunohistochemical study. Donepezil treatment also inactivated GSK3β, which is one of the tau kinases, via the activation of Akt [6]. So we keep using the drug in the paper.