Globally, hyperlipidemia has become a major cause of most serious diseases that threaten human health and life such as diabetes, high blood pressure coronary heart disease, stroke, peripheral vascular disease [1-3]. Hyperlipidemia is also considered a strong risk factor for atherosclerotic changes in the vascular wall [4,5].

This study was focused in testing the effect of treating hypercholesterolemic male rats with Christ’s thorn seeds for 8 weeks to test their effect on lipid profile and antioxidants activity.

The Christ’s thorn seeds were collected from Christ’s thorn fruits from Jeddah, Saudi Arabia. All chemicals used are of analytical grade. All commercial kits used in the analysis were of international reputation.

The Christ’s thorn seeds were washed with distilled water, sun dried for 72 h, and then milled using mixer. A 500 g of the powder were soaked in 5 litre distilled water for 72 h under constant shaking with intervals of 30 min. The mixture was filtered using 250 mm filter papers, and then the filtrate was freeze-dried at (-52°C). A 200 g semisolid product was produced. To obtain the recommended concentration, the suitable weight of the semisolid product was dissolved in the suitable amount of distilled water.

By the end of the experiment, animals were euthanized by cervical dislocation and blood samples were collected for serum preparation. The abdomen was dissected and the organs were rapidly dissected out. A piece of liver was kept cold in ice for liver tissue homogenate preparation.

The liver tissue homogenate was prepared according to the method described in Al-Seeni et al.,[21].

The biochemical analyses were carried out using the specified commercial kits from Human (Germany) according to the instructions of the suppliers.

The antioxidants enzymes; glutathione reductase (GR), catalase, and superoxide dismutase (SOD) were estimated in liver tissue homogenate using Biodiagnostic (Egypt) according to the instructions of the suppliers.

Lipid peroxidation was estimated by measuring the malondialdehyde (MDA)-the final product of the unsaturated fatty acids in the homogenate of the liver tissue using Biodiagnostic kit (Egypt) according to the instructions of the supplier.

A piece of the liver, a kidney, a testis and the heart were washed in sterile saline and fixed in 10% formalin, dehydrated in an ascending series of ethanol (50%-99%), cleared in xylene, and then embedded in paraffin. 5 microtomes sections were stained in hematoxylin and eosin (H&E) dye, air dried, and then mounted in Canada balsam. The prepared sections were examined and photographed under a light microscope with a digital camera.

The SPSS (Statistical Program for Sociology Scientists) software Version 23.0 was used in analyzing data for computing the mean, the standard errors (SE) and test of significance (T-test).

Table 2 shows that the antioxidant enzymes catalase, superoxide dismutase and glutathione reductase were increased in liver tissue homogenate as a result of induced hypercholesterolemia compared to the negative control, whereas lipid peroxidation was significantly increased. The concurrent administration of Christ’s thorn seed aqueous extract in G3 significantly increased the antioxidant enzymes under study and decreased the lipid peroxidation to the normal levels in G1.

Induction of hypercholesterolemia in G2 increased all liver function enzymes; ALT, AST and γ-GT in serum compared to the negative control as shown in Table 3. While the concurrent administration of the aqueous extract of Christ’s thorn seed in G3 significantly restored the liver enzymes to their normal levels. 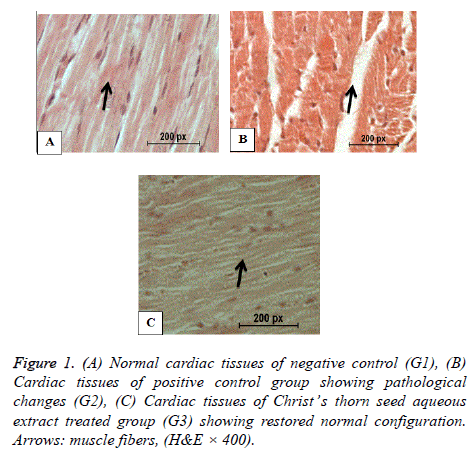 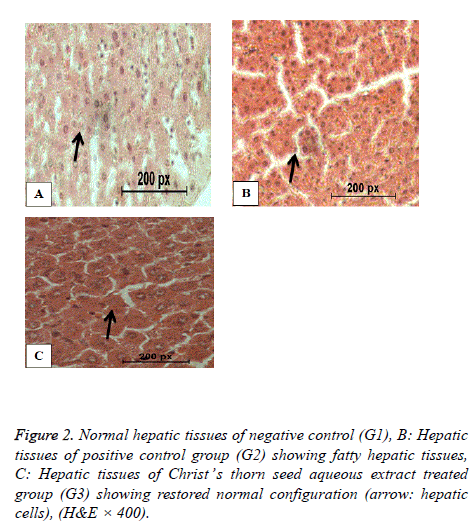 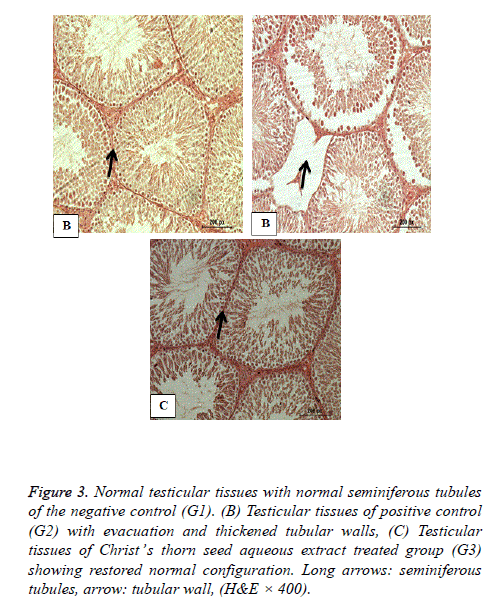 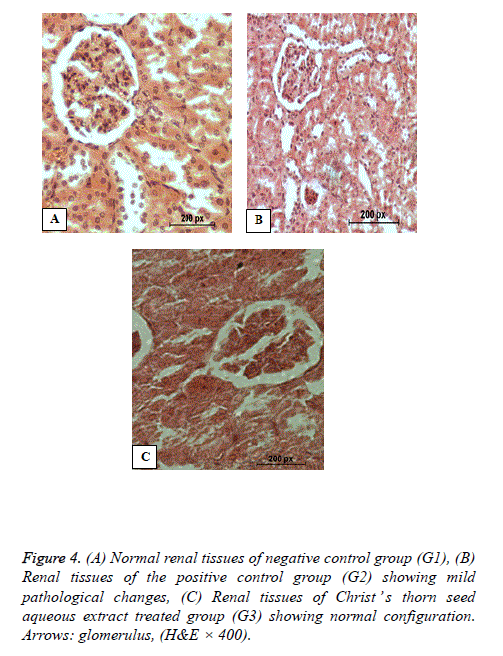 Similarly, the induced hypercholesterolemia increased lipid peroxidation as revealed by the increase in the malondialdehyde (MDA) content in the liver tissue homogenate, whereas the antioxidant enzymes; superoxide dismutase, catalase and Glutathione reductase were decreased. This result is in congruent with previous studies [3,21].

The concurrent administration of Christ’s thorn crude seed aqueous extract also suppressed the oxidative stress by decreasing lipid peroxidation and increasing the antioxidant enzymes activity due to its active bio-constituents [22].

The activity of ALPAL and γ-GT representing liver function in this study was also increased in the hypercholesterolemic male rats of the positive group [3].These liver function enzymes restored their normal activities by administrating Christ’s thorn crude seed aqueous extract which is consistent with Dkhil et al., [16] who stated that Christ’s thorn methanolic leaf extract inhibited liver and heart injury. The kidney function parameters were nonsignificantly affected by the induced hyperlipidemiain the positive control [4,7,23]. On the line of the other studied parameters, administration of Christ’s thorn seed aqueous extract ameliorated the levels of creatinine, uric acid and urea in the serum.

Similarly, serum electrolytes were also nonsignificantly affected by the induced hypercholesterolemiain in the positive control due to the altered membrane permeability or glomerular filtration rate [24]. Administration of Christ’s thorn seed aqueous crude extractameliorated thelevels of all electrolytes and restored the normal levels. This therapeutic effect of the aqueous extract of Christ’s thorn seeds may be due to its antioxidant and anti-inflammatory activity [13,16,22].

The histology of the studied organs reflected the altered biochemical investigations is in congruent with previous studies; the liver was severely affected [2,21]. Also the heart [3,21] and testes [8,25] were severely injured whereas the kidney was mildly affected [7] by the induced hypercholesterolemia in the positive control. However, Bentley et al., [4] stated that hypercholesterolemia causes renal morphological damage due to the increased microvascular density in the renal cortex that may lead to real disease progression.

This result is consistent with similar studies confirmed a correlation between hypercholesterolemia and alteration in organ’s histology [21,24-26]. The concurrent administration of Christ’s thorn crude seed aqueous extract alleviated these histological changes of the studied organs and restored their normal histology. This alleviating activity of Christ’s thorn seed aqueous extract is due to its antioxidant and freed radical scavenging activity of the phenolic constituents of the seed aqueous extract which helped in suppressing oxidative stress that lead to cell damage and reduced the effect of hypercholesterolemia [13].

In addition, total body weight was significantly increased by hyperlipidemia [21] and restored its normal weight as in the negative control with the concurrent treatment with Christ’s thorn seed aqueous extract.

In conclusion, induction of hypercholesterolemia severely altered lipid profile, liver function, oxidative stress, and histology of liver, heart, testis and kidney. While treating the hypercholesterolemic male rats with Christ ’ s thorn seed aqueous extract restored all biochemical blood tests and the histology of the studied organs early to the normal. This may be attributed to the antioxidant and inhibition of oxidative stress by the phenolic constituents of the Christ’s thorn seed.