A total of 310 patients with esophageal cancer were selected in our hospital from February 2016 to November 2016. There are 160 males and 150 females, and the age range from 28 to 74 y with an average age of 45 ± 7.8 y. Inclusion criteria: (1) patients with esophagus squamous cancer confirmed by endoscopic biopsy, (2) preoperative clinical staging cT1-3N0M0, (3) with satisfactory function of major organs that can tolerate surgery, age<75 y, (4) distant metastasis was excluded by physical examination, (5) without a history of malignant tumors. Exclusion criteria: (1) combined with other diseases that cannot be treated with surgery, (2) with estimated life-expectancy of no more than 1 year. This study was approved by the ethics committee of our hospital (AZLL022015006151201, 12/01/2015), and all patients signed informed consent.

The 310 patients were divided in to traditional treatment group and Geng’s treatment group according to their willing and physician’s recommendation, 155 patients in each group. No significant differences in basic information, including age, gender, weight, severity of disease etc. were found between those two groups. Patients in Geng’s treatment group were subjected to following surgical treatment: after general anesthesia, a double lumen endotracheal tube was intubated through left chest, neck, right chest or abdomen. Esophagus and stomach were treated with traditional method and lymph nodes were expurgated. Gastric tube was made using a closer 3.0 cm away from cardia, and blood supply to the greater curvature of stomach was retained. After suturing, gastric tube was lifted along original esophageal to neck incision, and 5~6 cm of gastric tube at the distal end was kept beyond the chest outlet. The position of the cephalic side of esophagus was adjusted and esophageal wall was clamped. Esophagus was opened and a nail holder was placed (a proper anastomat was used to avoid mucosal and muscle damage). Gastric torsion was avoided. A 2.0 cm transverse incision was made on the anterior wall of the stomach, and a suction device was used to remove the stomach contents. The host header of anastomat as inserted and the host connecting rod was pierced through stomach wall at the area without main blood vessels to connect to the center rod of nail holder.

After that, Geng’s treatment was performed:

1. Stomach pulp muscle and esophageal root muscle were sewn for 1 stitch at the left, middle and right part, respectively (Figure 1A). Anastomat was then used to match stomach and esophagus. After that, the integrity of tissue around gastroesophageal anastomosis was checked. 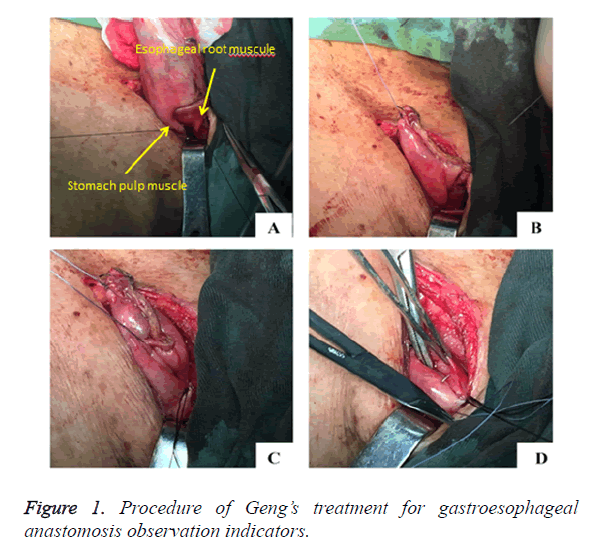 2. Gastric and vegetative tubes were placed through thoracic incision, gastric stumps were cut out and stomach was fixed at both left and right sides using absorbable thread (Figure 1B).

Patients in traditional treatment method was subjected to the same surgical treatment except that gastric stumps were not putted into cavity of tubular stomach and the perimeter of the collar shape structure was not bigger than that of esophagus. After surgery, patients were followed up for a year to monitor the occurrence of postoperative complications, and only 9 patients failed to complete the follow-up.

All data were analysed by SPSS18.0 software (SPSS Inc., Chicago, IL, USA). Data of the normal distribution were recorded by (͞x ± s), and comparisons between two groups were performed b t test. Non-normal distribution data were processed by non-parametric Mann-Whitney U test. p<0.05 was considered to be statistically significant.

Table 1: Comparison of the incidence of postoperative complications between groups.

To reduce the higher incidence rate of complications, we developed Geng’s treatment for gastroesophageal anastomosis. In this novel method, anastomosis was not fully embedded, which may possibly inhibit the occurrence of anastomotic fistula. In addition, gastric stumps were putted into the cavity of tubular stomach to form a "valve" to reduce the reflux (Figure 2). Among 155 patients received this new treatment, no anastomotic fistula was observed, and gastroesophageal reflux was observed in only 2 cases, accounting for 1.3% of all the case. Significantly differences were found in the incidence rates of anastomotic fistula and gastroesophageal reflux between Geng’s treatment group and traditional treatment group (0% vs. 3.4%, p<0.01; 2.5% vs. 25.8%, p<0.01). However, no significant difference was found in the incidence of anastomotic stenosis between those two groups (3.4% vs. 3.8%, p>0.05). Therefore, further improvements are still needed to inhibit the occurrence of anastomotic stenosis. 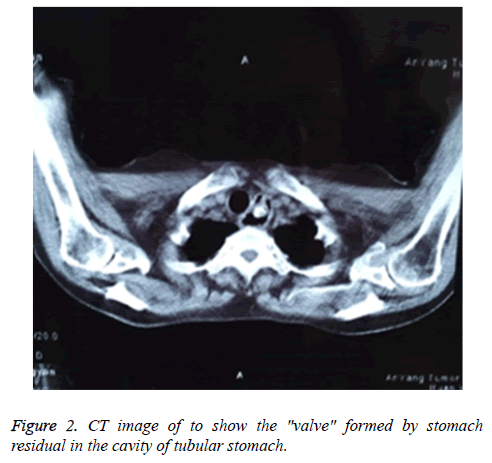 Figure 2: CT image of to show the "valve" formed by stomach residual in the cavity of tubular stomach.

In conclusion, compared with traditional treatment, Geng’s treatment significant reduced the incidence of anastomotic fistula and gastroesophageal reflux. Therefore, this method should be popularized in clinical practice.