In light of the above, researchers and clinicians need tests for the evaluation of hip abductor endurance. For this reason, Van Cant et al. [8] developed the hip abductor isometric endurance test (HAIE test) and assessed its test-retest reliability in 34 healthy females. The test demonstrated a good intraclass correlation coefficient (ICC=0.73) with a standard error of measurement (SEM) and minimal detectable change (MDC) of 19.8 and 54.9 seconds, respectively. We previously assessed the test-retest reliability of a modified hip abductor isometric endurance test in healthy females [9]. Thirty-four healthy females, aged 18-30 years, performed the clinical test in two identical assessment sessions. Every 15 s and at the end of the test, the subject give their perception about how hard the exercise felt according to the Borg scale (Borg RPE). In using the Borg RPE in this way, the testretest demonstrated better test-retest reliability (ICC=0.83) and SEM and MDC were 11.7 and 32.4 seconds. The authors concluded that the use of the Borg scale every 15 s and at the end of the test enhanced the test-retest reliability.

Because the results should not be generalized to unhealthy females, the purpose of this research was to assess the testretest reliability of the HAIE test in females with PFP, using the Borg scale every 15 s and at the end of the test. It was hypothesized the test-retest reliability of the HAIE test would be good in females with PFP.

Eight females (19-36 years) with PFP diagnosed by physicians were recruited through local advertising among females of the Institut Parnasse-ISEI (Brussels, Belgium), from local physical therapy clinics and physician’s offices. Inclusion and exclusion criteria were consistent with previous studies [1-4]. The inclusion criteria were (1) anterior, retro- or peripatellar pain during two of the following activities: squatting, kneeling, prolonged sitting, ascending or descending stairs, running, hopping, jumping, palpation of patella facet and isometric quadriceps contraction, (2) symptoms with insidious onset for at least 2 months. Participants (1) with injury or surgery of the low back or lower extremity within the past 12 months and (2) with cardiovascular, pulmonary, neurological, or systemic conditions were excluded from the study. All participants gave consent to participation in the present study approved by the Hospital and Departmental Ethics Committee, Saint-Luc - UCL.

The subjects attended two sessions, spaced by one week. The same investigators, two fourth-year physical therapy students, collected together all data and were supervised by a physical therapist with over 10 years’ experience. Age, weight, body mass and physical activity levels were collected. To assess physical activity levels, the French version of the Baecke Activity Questionnaire (BAQ) was completed. The BAQ is a short questionnaire including a total of 16 questions classified into three domains (work, sports, and non-sports leisure activity) receiving a score from one to five [10]. Moreover, participants completed the French version of the Lower Extremity Functional Scale (LEFS), a questionnaire applicable to individuals with musculoskeletal conditions of the lower limb [11]. The French version of the LEFS is a valid, reliable, and responsive tool that can be used to measure function in French patients with anterior knee pain [12,13]. Characteristics and demographics data are presented in Table 1.

Table 1. Characteristics of the participants (n=8).

During both sessions, all participants realized a warm-up of 300 s on a stationary cycle and then performed the HAIE test with the injured limb. In the case of bilateral symptoms, the most symptomatic limb was used. Every 15 s and at the end of the test, the subject was asked to give an overall perception about how hard the exercise felt according to the Borg RPE.

To perform the HAIE test, the participant was in a side lying position on the examination table. The evaluated hip was placed in neutral alignment, while the opposite hip was flexed. The pelvis was stabilized by straps (Figure 1). 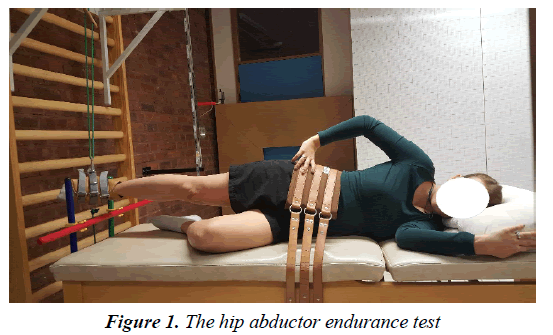 According previous studies an additional resistance, corresponding to 7.5% of body mass, was placed on the ankle of the evaluated limb [8,14-16].

Before beginning the test, the subject was allowed to rest the limb using a cable sling. Upon command, the subject was instructed to hold the leg in a horizontal position, aligned with the trunk, knee extended and to stabilize the pelvic and scapular girdles [8]. In order to control for the horizontality of the leg, a horizontal bar, fixed to vertical bars, was placed 5 cm underneath the malleolus. Moreover, a mirror was positioned close to the examination table so that the participants could control the horizontal position of the limb during the test. The time during which the subject held the limb straight and horizontal was recorded. The test was stopped when the ankle of the participant had contact with the horizontal bars for more than 5 s, despite investigator warnings or until she reached limit of fatigue.

Two studies have also assessed reliability of the hip abductor isometric endurance test, but in healthy females. Authors reported ICC-values ranging from 0.73 to 0.83, SEM ranging from 11.7 to 19.8 seconds and MDC ranging from 32.4 to 54.9 seconds [8,9]. In the present study, the procedure of the test and the results were very similar to the study by Van Cant et al. [9] (ICC, 0.83; SEM, 11.7 seconds and MDC, 32.4 seconds). As a reminder, ICC, SEM and MDC were respectively 0.81, 13.9 seconds and 38.5 seconds, in this research. This indicates that the hip abductor isometric endurance test produces reliable results when applied to females with PFP. Therefore, even if patients with PFP have disabilities of daily activities, work, and sport participation, it does not appear to affect the reliability of the test.

A limitation of the current study was the small sample size (8 participants), which limited the statistical power. On basis of the width of the ICC interval, sample size calculation (α=0.05, β=0.20) suggested that 17 subjects were required for the study. Therefore, the results of the present study must be interpreted with caution.

PFP being more frequent in females, all subjects tested were females and the results should not be generalized to males [20]. Moreover, the study sample was comprised of young adults, and age could be a factor that influences the reliability of the test. Finally, further studies should also determine the validity of the HAIE test and compare hip abductor endurance between females with and without PFP, using the HAIE test, in order to determine the clinical importance of the test.

The present study reported good test-retest reliability of the HAIP test in young females with PFP. Future studies should evaluate the validity and clinical importance of this measure, to assess whether this test could be recommended in the examination of patients with PFP.