Background: Belamcanda chinensis is a common traditional Chinese medicine, which is mainly used for the treatment of respiratory system disorders, including bronchial asthma, tonsillitis and infantile cough. Isoflavonoids, extracted from the rhizome of this plant, have been shown to exert antiinflammatory effects in vitro. In the present study, we evaluated the protective anti-inflammatory effects of tectorigenin and irigenin in Lipopolysaccharide (LPS)-stimulated murine macrophages.

Materials and Methods: RAW264.7 macrophages were treated with varying concentrations of tectorigenin and irigenin prior to being stimulated with or without LPS. The levels of inflammatory cytokines (Interleukin (IL)-6, Prostaglandin E2 (PGE2), and Tumor Necrosis Factor-alpha (TNF-α)) and mediators (Nitric Oxide (NO)) in the culture supernatant were measured by ELISA and Griess reagent assay, respectively. The cell viability was assessed using the MTT assay and the expression of inducible NO synthase (iNOS) and cyclooxygenase (COX)-2 was analysed by western blotting.

Results: The data demonstrated that LPS induced the expression of the inflammatory mediators; whereas, tectorigenin and irigenin suppressed the release of NO, IL-6, PGE-2 and TNF-α in the supernatant of LPS-stimulated macrophages, and inhibited iNOS and COX-2 in a dose dependent manner. Furthermore, we found that these extracts had no effect on the cell viability, indicating that tectorigenin and irigenin were not cytotoxic to the murine macrophages.

Conclusion: Our data suggest that tectorigenin and irigenin possess anti-inflammatory functions, and may provide an alternative strategy for reducing inflammation.

Belamcanda chinensis, a medicinal flowering perennial of Chinese origin, belongs to the Iridaceae family. The rhizome of Belamcanda chinensis has been shown to possess antitussive, anti-inflammatory and expectorant activities; and is used in Chinese traditional medicines to treat throat ailments such as tonsillitis and asthma [1]. Recent studies show that Belamcanda chinensis contains abundant isoflavonoids, which have significant antiviral and anti-inflammatory properties. Clinically, these extracted isoflavonoids are used for the treatment of influenza and upper respiratory tract infections [2]. It has been previously reported that tectoridin and iridin along with their respective glycosides tectorigenin and irigenin can be isolated from the rhizome of Belamcanda chinensis [3]. Moreover, studies have shown that these isoflavonoids and their glycosides are chemically active; and particularly, the glycosides possess the most potent pharmacological activity [2,4]. Moreover, it has been reported that orally administered tectoridin is converted into tectorigenin by human intestinal bacteria, which exhibited more potent anaphylaxis inhibitory activity and hypoglycemic activity compared with tectoridin [5,6]. In our previous study, we reported that tectoridin in the role of intestinal flora can turn for tectorigenin, and iridin turn for irigenin, tectorigenin and irigenin in gastric and duodenal absorption were good in the corresponding glycosides compounds [7].

Previous studies have shown that Belamcanda chinensis extract inhibited xylene-induced swelling of mouse ear and egg white-induced hind paw edema in rats, suggesting its potent anti-inflammatory activity in vivo [8]. However, this study investigated only the effects of Belamcanda chinensis extract, and not the monomer compounds present in the extract. Moreover, the anti-inflammatory mechanism associated with these monomeric compounds has not been previously explored. Tectorigenin and irigenin, isolated from the rhizomes of Belamcanda chinensis are used as Chinese traditional medicine for the treatment of throat diseases.

Lipopolysaccharide (LPS)-activated macrophages have typically been used to evaluate the anti-inflammatory effects of numerous drugs. LPS stimulate macrophages; the cells will produce large amounts of Nitric Oxide (NO) and Prostaglandin E2 (PGE2), which are catalysed by Nitric Oxide Synthase (NOS) and Cyclooxygenase (COX) respectively. Tumor Necrosis Factor-alpha (TNF-α) and Interleukin-6 (IL-6) are important cytokine induced by LPS, involved in the inflammatory reaction process [9]. IL-6 is an intrinsic mediator of LPS-induced fever in the body and a major factor in the induction of inflammatory responses. It can promote the differentiation of T lymphocytes and B lymphocytes amplify inflammatory reactions in cascades and cause damage to tissues [10]. The level of IL-6 can be used to determine the severity of inflammatory response to the sensitive indicators [11]. TNF- can mediate multi-inflammatory and immune response; the expression level can directly reflect the severity of inflammation [12]. The study found that the body by the LPS stimulation, the heart, liver, uterus and fallopian tubes and other organs quickly a large number of synthetic TNF-α, neutrophil chemotaxis strengthened, and then mediated the occurrence of inflammatory response [13]. When the body is stimulated by LPS, macrophages can activate and release a variety of cytokines, including IL-6, TNF-a, these cytokines can further activate the body's endothelial cells release oxygen free radicals, accelerate the metabolism of arachidonic acie and release prostaglandins, leukotriene and other inflammatory mediators, cause or aggravate the inflammatory response.

In the present study, we investigated the potential anti-inflammatory effects of tectorigenin and irigenin on the production of NO, IL-6, PGE2 and TNF-α as well as the expression of COX-2 and iNOS protein in LPS-stimulated RAW264.7 macrophages. Furthermore, we also analysed the cytotoxic effects of these isoflavonoids on murine macrophages.

Cell viability was assessed using MTT assay. Briefly, RAW264.7 macrophages (1 × 105 cells/ml) were seeded in a 96 well plates. After 24 h, cells were treated with different concentrations of Tectorigenin (0-64 μg/ml) or Irigenin (0-176 μg/ml) for 1 h, with or without LPS (2 μg/ml) incubated for additional 24 h. The cell culture supernatants were removed, and MTT (5 mg/ml in PBS) was added to each well. The macrophages were incubated for 4 h at 37°C. The supernatants were discarded, and DMSO (Dikma, USA) was added to each well. The optical density of the resulting solutions was measured at 490 nm using a microplate reader (BioTek Elx800, USA).

The presence of NO in the culture supernatant was determined based on the Griess test (Beyotime, China). RAW264.7 macrophages (1 × 106 cells/ml, 96-well plate) were pre-treated with tectorigenin (8, 16, and 32 μg/ml) or irigenin (22, 44, and 88 μg/ml) for 1 h before LPS (2 μg/ml) stimulation [14]. After 24 h incubation, the culture supernatants were collected for NO determination using the Griess reagent. The absorbance was read at 550 nm using a microplate reader, and NO concentrations were calculated with reference to the nitrite standard curve generated using NaNO2-.

RAW264.7 macrophages were cultured in tissue culture flasks for 24 h at a seeding density of 1 × 106 cells/ml. The macrophages were pre-treated with tectorigenin (8, 16, and 32 μg/ml) or irigenin (22, 44, and 88 μg/ml) for 1 h, and then stimulated with LPS (2 μg/ml) for 24 h. Following incubation, cells were washed twice with ice-cold Phosphate Buffer Saline (PBS), and lysed with cold lysis buffer, for 30 min on ice. The cell extracts were then centrifuged at 14,000 r/min, 4°C for 15 min, and the resulting supernatant containing cellular protein was collected and stored at -80°C. Total protein was quantified using a BCA protein assay kit (Beyotime, China). Protein extracts were separated by Sodium Dodecyl Sulfate Polyacrylamide Gel Electrophoresis (SDS-PAGE) and electrophoretically transferred to Polyvinylidene Fluoride (PVDF) membranes (Millipore, Billerica, MA, USA). Membranes were incubated in 5% non-fat milk blocking buffer in PBS at room temperature for 1 h. INOS and COX-2 primary antibodies were added at 1:200 dilution in non-fat milk blocking buffer in PBS, and incubated overnight at 4°C. Following washes in PBS, the membranes were incubated in secondary antibody (1:1000) at room temperature for 1 h. The protein bands were detected utilizing the eECL western Blot kit (Cwbio, China). β-actin was used as a loading control to normalize differences in loading of the proteins. Densitometric values of the immunoblot signals were obtained with Image J (National Institutes of Health, USA).

The results were expressed as Mean ± SD. Differences between the mean values of normally distributed data were assessed by the one-way ANOVA. P ≤ 0.05 was considered statistically significant.

In vitro cytotoxicity of tectorigenin and irigenin on murine macrophages

The cytotoxic effects of tectorigenin and irigenin on RAW264.7 macrophages were investigated. The cells were treated with varying concentrations of tectorigenin (8, 16, 32 μg/ml) or irigenin (22, 44, 88 μg/ml) for 24 h, and the cell viability was determined by the MTT assay. The results demonstrated that the percentage of the cell viability remained nearly unaltered in treated cells compared with untreated control macrophages (Figure 1). The data suggested that neither tectorigenin (Figure 1A) nor irigenin exhibited cytotoxic effects on RAW264.7 macrophages (Figure 1B) at the indicated concentrations. 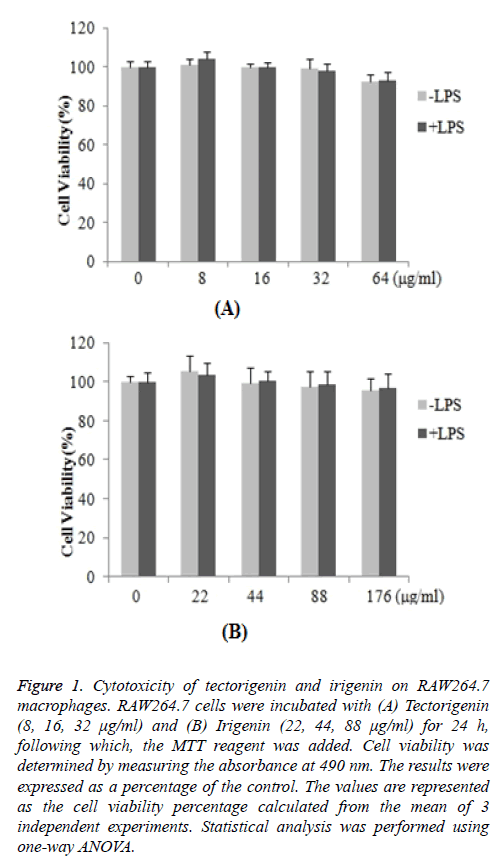 Figure 1: Cytotoxicity of tectorigenin and irigenin on RAW264.7 macrophages. RAW264.7 cells were incubated with (A) Tectorigenin (8, 16, 32 μg/ml) and (B) Irigenin (22, 44, 88 μg/ml) for 24 h, following which, the MTT reagent was added. Cell viability was determined by measuring the absorbance at 490 nm. The results were expressed as a percentage of the control. The values are represented as the cell viability percentage calculated from the mean of 3 independent experiments. Statistical analysis was performed using one-way ANOVA.

In order to determine the potential anti-inflammatory properties of tectorigenin and irigenin, we stimulated RAW264.7 cells with LPS (2 μg/ml) in the presence of tectorigenin (8, 16, 32 μg/ml) or irigenin (22, 44, 88 μg/ml). Accumulation of NO in the cell culture medium was quantified by the Griess reagent. As shown in Figure 2, LPS stimulation resulted in significantly increased NO production (0.779 ± 0.0293 μM) compared with the control unstimulated macrophages (0.015 ± 0.0073 μM). Interestingly, treatment with tectorigenin and irigenin led to a dose-dependent decrease in this accumulated NO (P<0.05). The results indicated that these isoflavonoids exert anti-inflammatory effects in the murine macrophages by inhibiting NO production and accumulation. 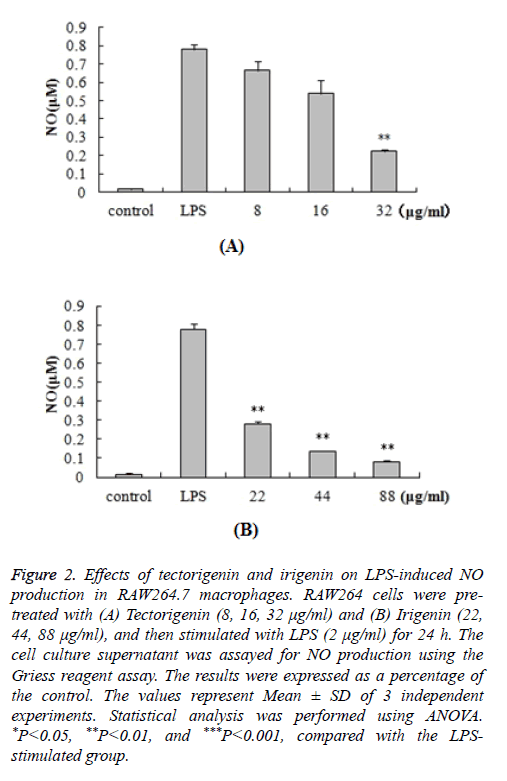 Figure 2: Effects of tectorigenin and irigenin on LPS-induced NO production in RAW264.7 macrophages. RAW264 cells were pretreated with (A) Tectorigenin (8, 16, 32 μg/ml) and (B) Irigenin (22, 44, 88 μg/ml), and then stimulated with LPS (2 μg/ml) for 24 h. The cell culture supernatant was assayed for NO production using the Griess reagent assay. The results were expressed as a percentage of the control. The values represent Mean ± SD of 3 independent experiments. Statistical analysis was performed using ANOVA. *P<0.05, **P<0.01, and ***P<0.001, compared with the LPSstimulated group.

Effects of tectorigenin and irigenin on the secretion of LPS-induced IL-6, PGE2 and TNF-α 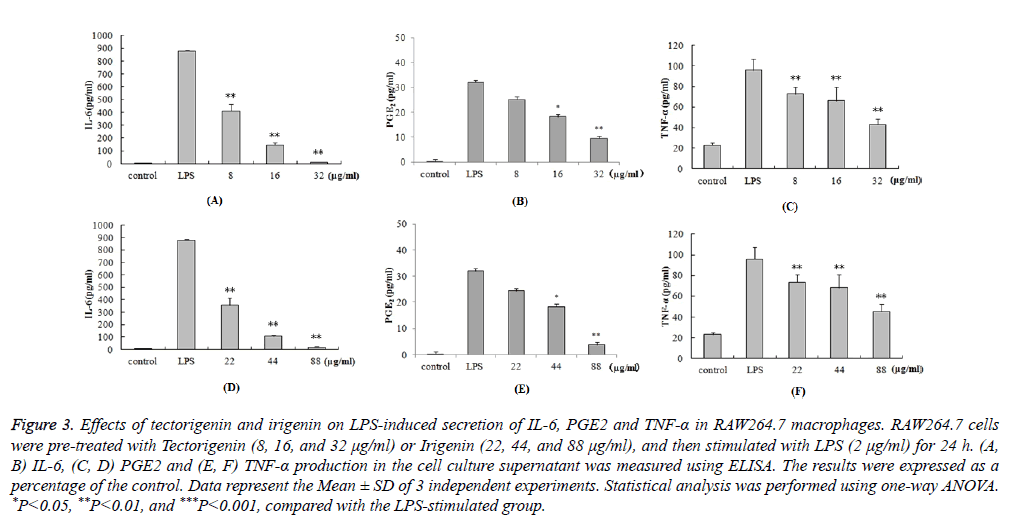 We further aimed to study the inhibitory mechanism of NO and PGE2 production in LPS-stimulated murine macrophages by analyzing the expression of iNOS and COX-2. RAW264.7 macrophages were pre-treated with tectorigenin (8, 16, and 32 μg/ml) or irigenin (22, 44, and 88 μg/ml), and then stimulated with LPS (2 μg/ml). The expression levels of iNOS and COX-2 in the cell lysates were detected by Western blotting.

As shown in Figure 4, the unstimulated control cells had almost undetectable levels of iNOS and COX-2; LPS stimulation led to a notable increase in the expression of these inflammatory mediators. Furthermore, pre-treatment with tectorigenin resulted in decreased iNOS and COX-2 expression, with maximum suppression occurring at 32 μg/ml (Figure 4A). Similar results were obtained when the macrophages were treated with irigenin prior to LPS stimulation (Figure 4B). 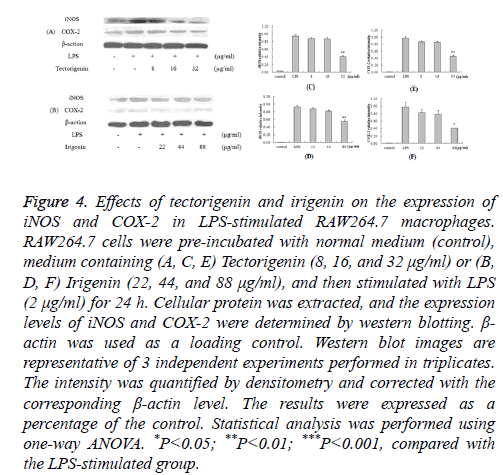 Figure 4: Effects of tectorigenin and irigenin on the expression of iNOS and COX-2 in LPS-stimulated RAW264.7 macrophages. RAW264.7 cells were pre-incubated with normal medium (control), medium containing (A, C, E) Tectorigenin (8, 16, and 32 μg/ml) or (B, D, F) Irigenin (22, 44, and 88 μg/ml), and then stimulated with LPS (2 μg/ml) for 24 h. Cellular protein was extracted, and the expression levels of iNOS and COX-2 were determined by western blotting. β- actin was used as a loading control. Western blot images are representative of 3 independent experiments performed in triplicates. The intensity was quantified by densitometry and corrected with the corresponding β-actin level. The results were expressed as a percentage of the control. Statistical analysis was performed using one-way ANOVA. *P<0.05; **P<0.01; ***P<0.001, compared with the LPS-stimulated group.

In summary, our data demonstrate that tectorigenin and irigenin potently inhibit LPS-induced production of NO, IL-6 and TNF-α as well as iNOS and COX-2 expression. In addition, these plant-derived isoflavonoids exhibit no cytotoxic effects on murine macrophages. Our results suggest that both tectorigenin and irigenin possess anti-inflammatory functions, and may provide an alternative strategy for reducing inflammation.

We are grateful to the members of Li Guoxin teaching and research team for their expert guidance. This work was supported by grants from the National Natural Science Foundation of China (No. 81273927).