Surgical treatment of renal cell carcinoma metastatic to the pancreas: report of one case and review of the literature

Metastasis of Clear Cell Renal Cell Carcinoma (CCRCC) to the pancreas is uncommon. Herein, we describe a case of a 53-year-old man with a history of CCRCC treated by radical left nephrectomy 11 years previously, who presented with a pancreatic tumor detected during health examination. Computed Tomography (CT) scan, Magnetic Resonance Imaging (MRI) and Positron Emission Tomography CT (PET-CT) confirmed a solitary mass at the head of pancreas. Cytological diagnosis by FNA prior to surgery was metastatic carcinoma. Standard pancreaticoduodenectomy was performed and postoperative pathology confirmed as metastatic CCRCC. The patient had an uneventful post-operative recovery. Now he was followed up for 18 months and no clinical signs of recurrence occurred.

Herein, we report a case of a 53-year-old man, who present with a pancreatic tumor detected during health examination. Had a history of RCC treated by radical left nephrectomy 11 years previously, and reviewed several studies and case reports in recent years, expect to find out a best way to treat this disease.

A 53-year-old man had received left nephrectomy due to left renal tumor 11 years previously, and the pathologic results were CCRCC with negative ureteral margin. After 11 consecutive years of follow-up, he underwent a medical examination and BUS showed a mass in the head of the pancreas. In spite of no obvious symptoms, he was admitted and several imaging examinations were introduced in order to make a diagnosis. Computed Tomography (CT) and Magnetic Resonance Imaging (MRI) scan and MRI showed a unique 3.0 cm × 2.0 cm mass at the head of pancreas (Figure 1A and 1B). Positron Emission Tomography CT (PET-CT) demonstrated abnormal metabolic activity in pancreatic head (Figure 1C). Cytological diagnosis by FNA prior to surgery was metastatic carcinoma. Pancreatic metastasis from CCRCC was confirmed according to the history of CCRCC and these results. Then he was scheduled for surgical resection. Intraoperative rapid pathologic results revealed pancreatic metastatic clear cell carcinoma, so standard pancreaticoduodenectomy was performed. Postoperative pathological gross examination of the specimen showed a fragile and grey mass and the diameter was about 3 cm (Figure 2A). Microscopic examination confirmed clear cell. The tumor cells arranged in nests or acinar structures, were rich in translucent cytoplasm and had round small nuclear and separated by fibrous tissue containing capillary (Figure 2B). The patient had an uneventful post-operative recovery. Now he was followed up for 18 months and no recurrence occurred. This study was conducted in accordance with the declaration of Helsinki. This study was conducted with approval from the Ethics Committee of Zhejiang Provincial People’s Hospital. Written informed consent was obtained from participant.

Figure 1: Enhanced abdominal CT. (1A) scan and MRI (1B) showed a 3.0 × 2.0 cm mass at the head of the pancreas. PET-CT demonstrated pathologic uptake of the tracer in pancreatic head (1C). 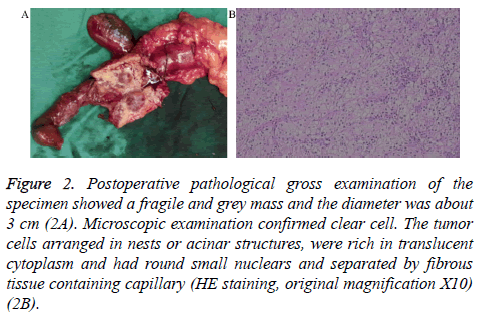 Figure 2: Postoperative pathological gross examination of the specimen showed a fragile and grey mass and the diameter was about 3 cm (2A). Microscopic examination confirmed clear cell. The tumor cells arranged in nests or acinar structures, were rich in translucent cytoplasm and had round small nuclears and separated by fibrous tissue containing capillary (HE staining, original magnification X10) (2B).

Currently CCRCC is increasing all over the world. Among these patients, approximately 20%-30% have a metastatic status at the time of presentation. Moreover, the tendency of secondary diseases is common in spite of early treatment by nephrectomy for primary CCRCC [5]. In our case, the patient was found pancreatic metastasis after resection of renal cell carcinoma 11 years, which is consistent with most of the cases currently, reported disease-free survival. For this reason a long follow up above 10 years is necessary in patients with CCRCC [1]. Pancreas is one of the secondary locations of CCRCC and it is often involved in diffuse metastatic disease [6]. Isolated metastasis to the pancreas is rare, ranging in incidence from 2%-5% [7].

In our case, the patient had no symptoms, and pancreatic mass was found by routine examination after nephrectomy, CT and MRI showed a mass in pancreas head, about 3 cm in size. As reported in earlier similar case, pancreatic metastases are rarely symptomatic. Most patients are detected during follow-up investigations after previous operation or annual physical examination [1]. Just like this case. While some patients may present with abdominal pain (20%), gastrointestinal tract bleeding (20%), obstructive jaundice (9%), weight loss (9%), pancreatitis (3%) or diabetes mellitus (3%), which is similar with other malignant tumors, especially primary pancreatic tumor [8]. Several studies showed that the diameter of the metastatic lesion have some association with patient symptoms. Bassi reported that in asymptomatic patients the median tumor diameter was less than 25 mm, while 45 mm in symptomatic patients [9].

The preoperative diagnosis of pancreatic metastasis from CCRCC is a suspicion based on the fact that the patients had a surgical resection previously. Imaging examinations such as US, CT, MRI, EUS and PET-CT can help to make diagnosis. Sometimes fine-needle biopsy by the conduct of EUS or CT was helpful to confirm the clinical suspicion. As this case, an obvious nodular enhancement at arterial and portal phases was described on CT scan. MRI found the same lesion. PET-CT was introduced to identify the distant metastasis. The diagnosis was confirmed with cytological result by fine-needle biopsy. In Our opinion, preoperative EUS and FNA are very important, can get pathological diagnosis preoperatively. The diagnosis rate of clear cell carcinoma by FNA cytology was about 77%, mainly because of its cytological features, which was obvious in the features of haemorrhage and necrosis. Compared to other metastatic pancreatic cancer, the present study showed that renal cell carcinoma with pancreatic metastasis is relatively good in the prognosis, and if other parts of the tumor metastasis to the pancreas, that means the cancer had no surgical indications. So, we can formulate the treatment plan before surgery for pancreatic mass by FNA cytology.

In our case, a standard pancreaticoduodenectomy was performed; the patient had an uneventful post-operative recovery. Now he was followed up for 18 months and no clinical signs of recurrence occurred. At present surgical resection of pancreatic metastasis from CCRCC remains the most effective treatment. Surgical resection might be associated with long-term disease-free intervals in highly selected patients. Hoshino et al. reviewed studies from 1998 to 2013 that focused on surgical resection. The results showed the median 5-year overall survival rate after metastasectomy was reported to be 75% to 88%, compared to 0% to 50% without metastasectomy [10]. Raphael Benhaim et al. reported a retrospective monocentric study including 20 surgically treated patients, median follow-up after pancreatectomy was 69 months (1-150 months). Disease-free survival at 2 years was 60%. Overall survival rates at 2 and 4 years were 79% and 72% respectively [11]. At the meantime, targeted therapies, such as sunitinib and pazopanib, have shown efficiency on metastatic CCRCC with improvement of overall survival [12]. In addition, radiofrequency ablation for pancreatic malignancies may be a facultative option, but recently a systematic review reported median survival after RFA of 3-33 months, morbidity related to RFA of 4%-37%, mortality of 0-19% and overall morbidity of 10%-43% [13]. It means that compared with control group, the RFA has no obvious advantage while significantly increased the risk; it is not recommended that the RFA for pancreas metastasis, chemotherapy, radiotherapy and immunotherapy have proved to be ineffective for metastatic CCRCC.