There were 121 males and 125 females, with a male-to-female ratio of 0.97:1. The cases were aged 18-70 years old, with an average of 41. The course of disease was 1 months to 8 years, with an average of 3.5 months. Clinical manifestations included headache, sexual dysfunction, menstrual disorder, galactorrhea and acromegaly. All 246 cases had vision or visual field disturbance to varying degree, and 35 cases were combined with hydrocephalus and an apparent increase of intracranial pressure, accounting for 14.23%.

Endocrinological indicators increased in 82 cases, accounting for 33.33%. There were 68 cases who had a mild increase in Prolactin (PRL) level (30-60 μg/L), accounting for 27.64%. These cases took bromocriptine for over 3 months before surgery, which did not result in an apparent shrinkage of tumors. Growth Hormone (GH) level increased (>30 μg/L) in 14 cases (5.69%), who did not receive any medication. Before surgery 87 cases had hypopituitarism, accounting for 35.37%.

Surgical treatment massive resection of tumors was performed for all 246 cases. Those with hypopituitarism received cortisol and thyroxine supplement before surgery. Tumor size, position, growth pattern and invasion to the surrounding tissues were assessed by preoperative CT and MRI. Different surgical strategies, namely, transcranial surgery, microscopic endonasal transsphenoidal surgery, and combined transcranial surgery with transsphenoidal surgery, were given depending on patients’ conditions (Table 1). All cases received local radiotherapy (photon knife) after surgery, with follow-up for over a year.

In accordance with Hardy’s criteria for surgical outcome for pituitary adenoma and patients’ recovery, outcome was divided into cured, improved and relapse. Of 246 cases, 173 cases were cured, 57 cases were improved and 16 cases relapsed (Table 2 and Figures 1 and 2). 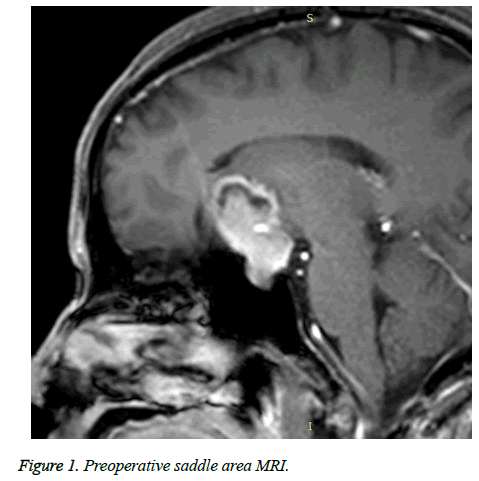 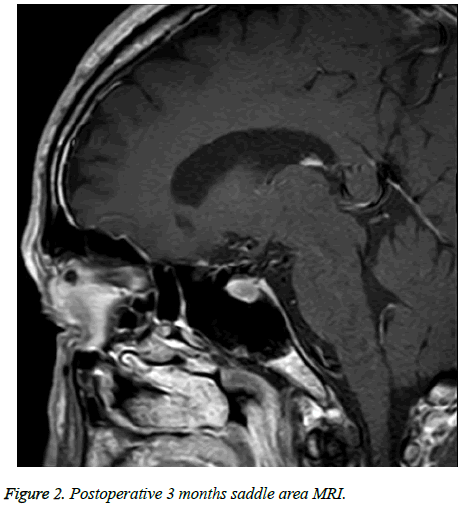 There were 115 cases who had transient profuse urination after surgery (46.75%), but none of them had permanent profuse urination; 124 cases had hypopituitarism after surgery (50.41%), and most of them already suffered from hypopituitarism before surgery; 10 cases had intracranial hemorrhage (4.07%); 8 cases had intracranial infection (3.25%); 2 cases had cerebrospinal fluid leakage (0.81%); 36 cases had transient severe internal millieu disorder (14.63%); 4 cases died (1.62%), including 3 cases with intracranial hemorrhage and 1 case with lung infection (Table 3).

Great progress has been made in medication for pituitary adenomas in recent years. Prolactinoma is the most common type of hormone-secreting pituitary tumor, for which dopamine receptor agonists are preferred. In China, the first-line drug for prolactinoma is bromocriptine. Cabergoline is used for those who are resistant or intolerant of bromocriptine to reduce the hormone level and tumor size [7]. Growth hormone receptor antagonists such as octreotide and lanreotide prove effective against GH- and TSH-secreting pituitary adenomas. We recommend medication as the first-line therapy for giant pituitary adenomas that do not cause cranial nerve compression or for patients who cannot tolerate surgery. But early surgery is recommended for those where the tumors already cause cranial nerve compression or who do not respond to medication.

Radiotherapy is an adjuvant therapy for pituitary adenomas if the surgery is performed with difficulty or if the recurrence risk is high [8]. Stereotactic gamma knife radiosurgery can reduce tumor size and lower surgical difficulty. Although it can help reduce the recurrence of pituitary adenomas, the risk of hypopituitarism, optic nerve injury and cerebral radiation necrosis still exists because of intensive gamma radiation [9]. The appropriate dose of radiotherapy depends on tumor type, tumor size, distance between the tumor and optic nerve and predicted risk of post-radiotherapy complications. The dose needed for improving the hormone levels is usually higher, and the duration of radiotherapy is longer. Moreover, radiotherapy usually achieves a better effect in non-functioning pituitary adenomas than in functioning pituitary adenomas [10]. When tumors already compress the optic nerve, the use of radiotherapy is usually restricted. It is generally believed that radiotherapy can be only safely applied when the distance between the tumor and optic chiasm is at least 3 mm. For these patients, we recommend surgical decompression or medication to reduce tumor size and to increase the distance from the optic chiasm before gamma knife radiation. Study has shown that the appropriate peripheral dose in gamma knife radiation is 15 Gy and that the incidence of hypopituitarism increases significantly above this threshold [11]. Photon knife is a threedimensional conformal radiation, which provides uniform irradiation of tumors at a high dose, thus reducing the injury to adjacent normal tissues and preserving the normal tissues [12]. The radiation dose for the periphery of the tumors should not be lower than 12 Gy and that for optic nerve and optic chiasm should not be lower than 10 Gy. Otherwise, the tumors can be hardly controlled, and the risk of vision and visual field injury increases.

We suggest that the pear-shaped giant pituitary adenomas growing into the sphenoid sinus should be treated via the endonasal transsphenoidal approach. For the inverted pearshaped adenomas that grow into the suprasellar and parasellar regions, the transcranial surgery will be more appropriate. In our study, 128 patients had inverted pear-shaped giant pituitary adenomas, who were treated by the transcranial surgery. The cure rate was 75.00% (96/128), and improvement rate was 18.75% (24/128), and the recurrence rate was 6.25% (8/128) among these 128 patients. Endoscopic transsphenoidal approach was performed in 84 cases who had pear-shaped giant pituitary adenomas. Among them, the cure rate was 60.72% (51/84), the improvement rate was 29.76% (25/84), and the recurrence rate was 9.52% (8/84).

For giant pituitary adenomas that grow into the sphenoid sinus and penetrate the diaphragma sellae to go into the suprasellar and parasellar regions, we believe that the combined transcranial surgery with transsphenoidal surgery can achieve a complete resection of the tumors. All 34 cases who had such pituitary adenomas received combined transcranial surgery with transsphenoidal surgery. The cure rate was 76.47% (26/34) and the improvement rate was 23.53% (8/34), and none of the cases relapsed. Based on our clinical experience we suggest that transcranial surgery should be performed first to resect the suprasellar and parasellar lesions, which is followed by the staging transsphenoidal surgery to resect the lesions in the sphenoid sinus and intrasellar region. If the lesions in the sphenoid sinus and intrasellar region are first resected, there may be the risk of suprasellar lesion collapsing into the intrasellar region and compressing the diaphragma sellae, which can cause pituitary apoplexy. Moreover, the involvement and separation of suprasellar lesion with or from the brain tissues above it are likely to cause intracranial hemorrhage. 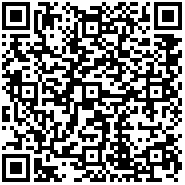